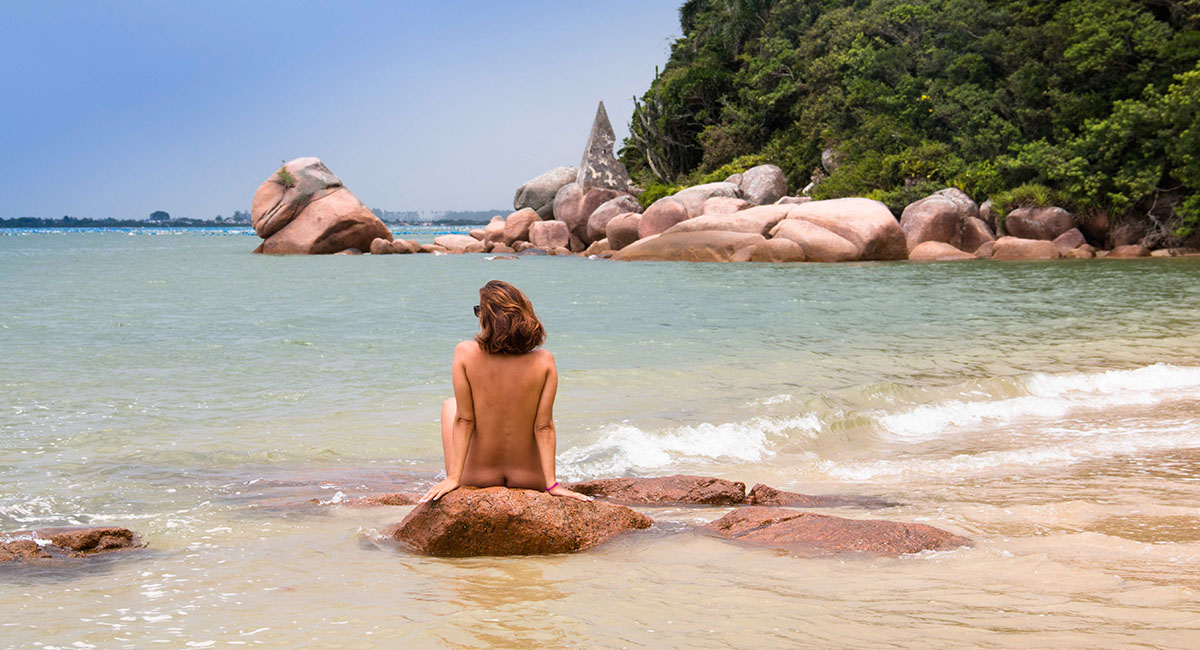 Our virtual tour around the nudist world continues. Previously in this “Nudism and Naturism around the World” blog post series, we talked about naturism in Europe and now we’re moving our naked butts across the Atlantic ocean. We’re going to check out where to find nudism in the Americas and who the American nudists really are.

In the part about naturism in Europe, we already discussed a bit of the terminology and the use of the words “nudism” and “naturism”. One very interesting thing we noticed as soon as we entered our first nudist resort in the USA was that we, naturists from Europe, were suddenly called nudists.
Just like in Europe, both the terms naturist and nudist are officially used for those who enjoy social non-sexual nudity. But the term nudist seems to be used much more frequently on this side of the ocean.
Basically, in the USA a nudist is everyone who enjoys social nudity. This can be at a club, at a B&B, at a nude campground or a nudist resort, or even on a nude beach. Naturists on the other hand make a specific link with nature. Those who prefer the term “naturist” are most often interested in visiting nude beaches, going on nude hikes, or prefer nude camping in the wild. 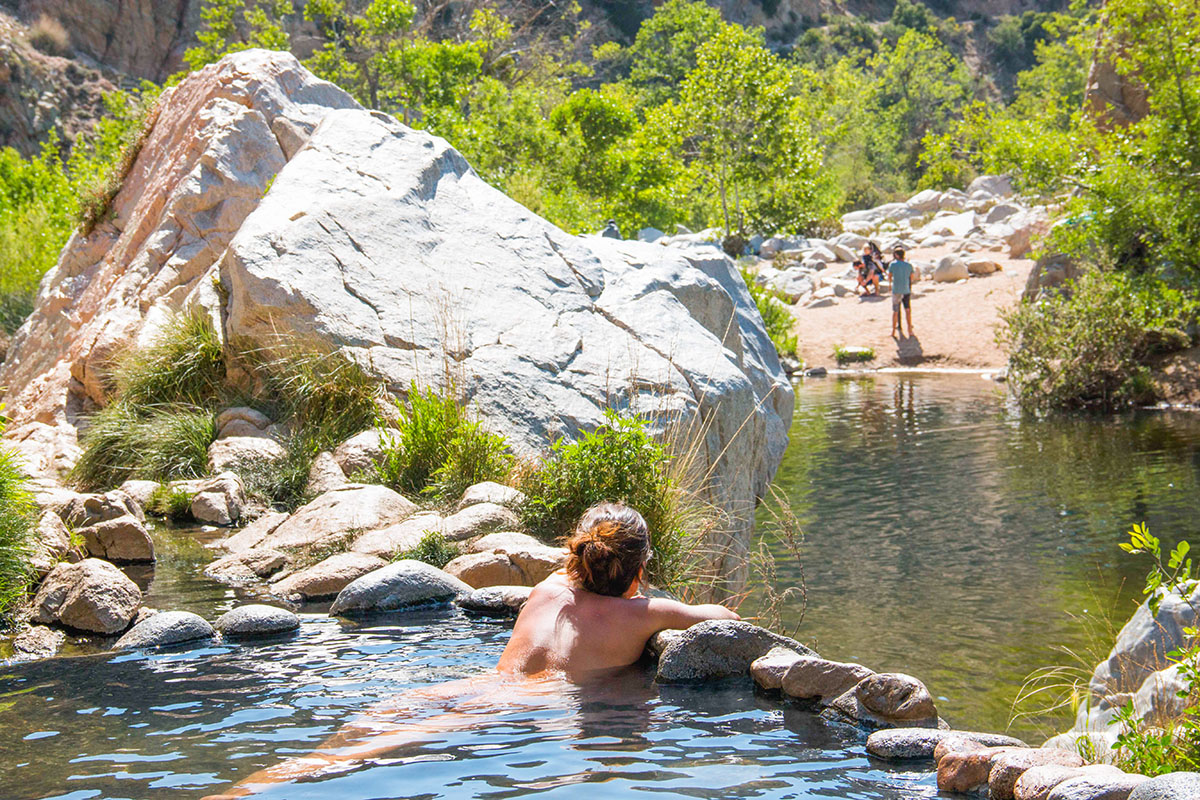 Unlike most other countries, the USA doesn’t have one but two official nudist/naturist federations. AANR (American Association for Nude Recreation) for the nudists and TNS (The Naturist Society) for the naturists. Of course, there’s a huge overlap. We’ve met lots of naturists and nudists who are members of both federations.
In Canada, we suddenly were naturists again. Although nudism is a widely used term that doesn’t have the same undertone as it often still has in Europe, we found that most nude Canadians preferred to call themselves naturists. Also, the resorts are more often called naturist resorts.
In Mexico on the other hand we switched back to being nudists. For a whole different reason: The term “naturism” was already in use. Because social nudity is a rather new thing in Mexico (compared with Europe and the USA), the healthy living/eco-friendly society had already taken the name “naturism”. It is quite funny though to see “naturist shops” in every other street, they just don’t sell any sarongs or naturist guidebooks. 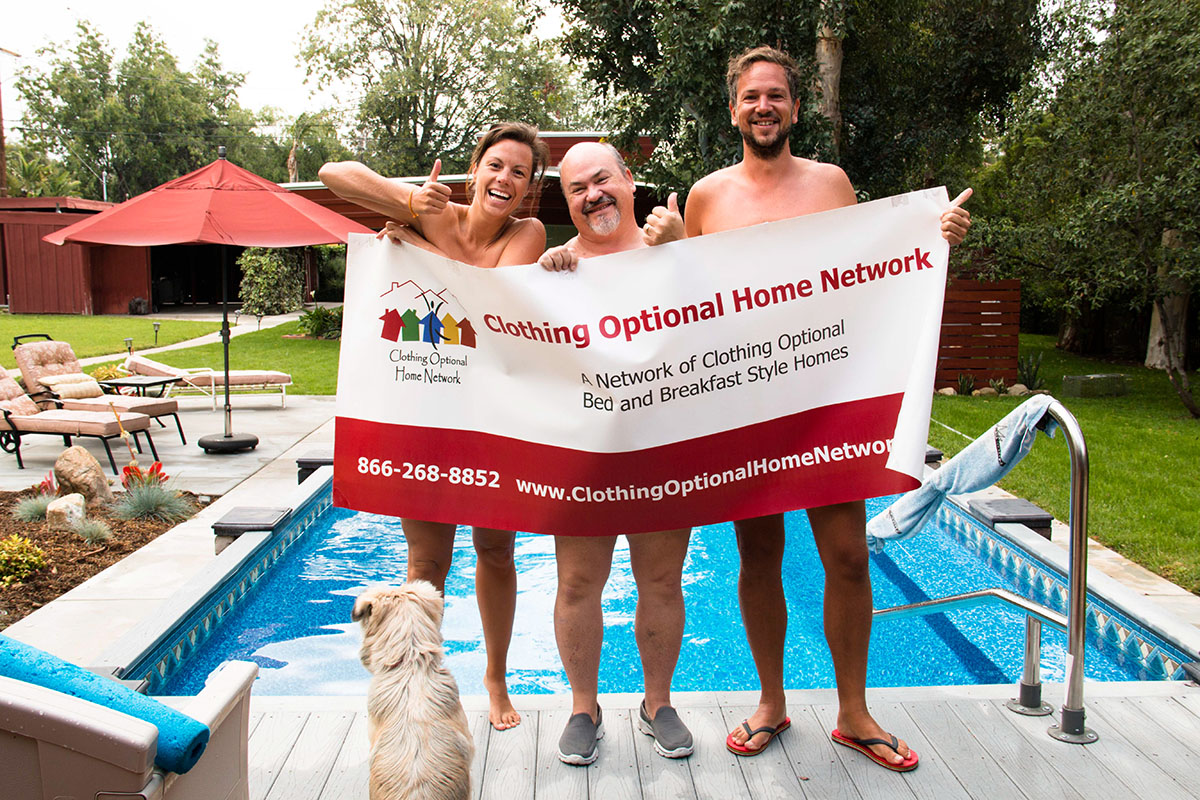 Nudism in the USA

Nude beaches and nudist resorts are common in the USA and pretty much every state has at least one nudist resort or club. Most options can be found in the coastal states.
The state which is the most known for nudism is Florida with its famous Haulover Beach. Pasco County promotes itself as the nudist capital of the USA and nudist resorts can be found all over Florida state. The most famous one probably being Cypress Cove.
On the west coast of the USA lays the underdog of nudism: California. For some (including ourselves) it’s quite surprising that nude tourism in California hasn’t skyrocketed yet. After all, it’s the state of (you’re weird if you’re normal) San Francisco, (everything is possible) Los Angeles, and the (even more is possible) porn industry. California is where the hippies went in the sixties in search of absolute freedom. Maybe that’s exactly the reason why the Californian government is reluctant to promote the state as a nudist paradise.
In any case, nudist options in California are great and plenty. There’s the wonderful Black’s Beach in San Diego, there’s a choice of nudist resorts in the woods or in the desert and what Pasco is to Florida is Palm Springs to California. Except that Palm Springs has better weather. Top class nudist oases in the Palm Springs desert include The Terra Cotta and Desert Sun Resort. 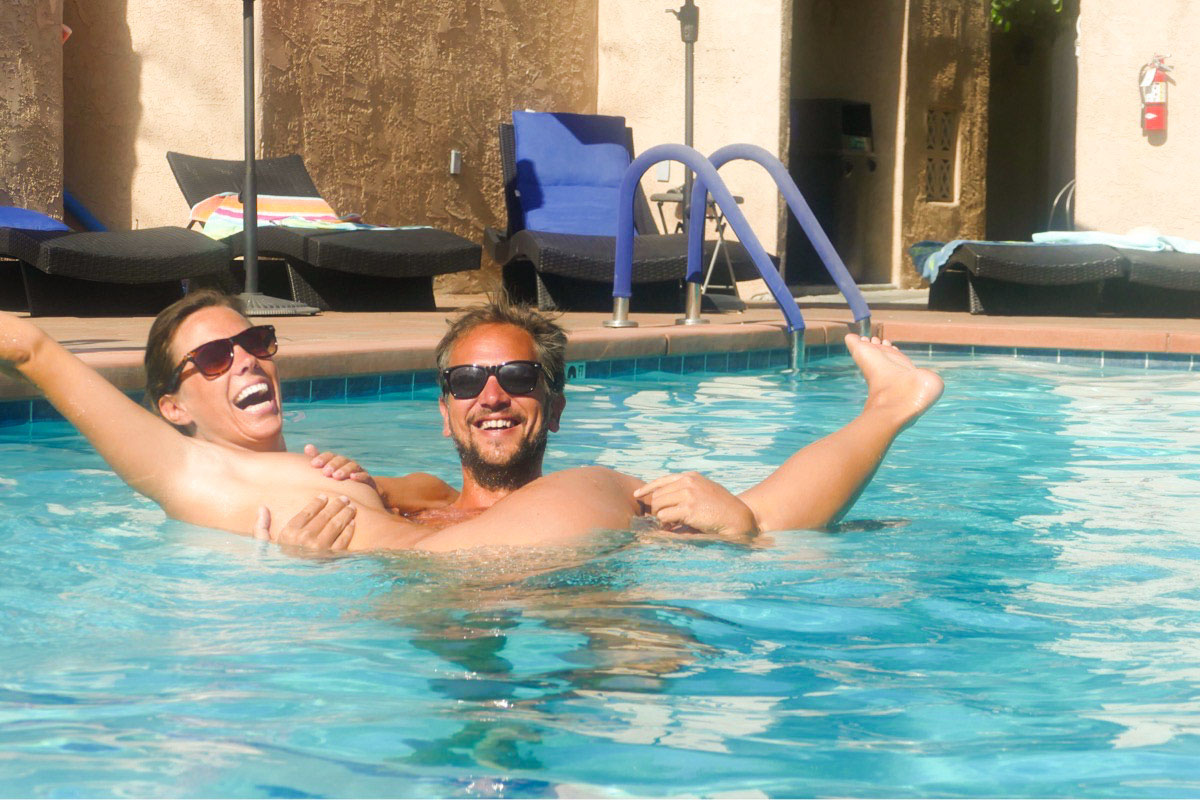 Two other famous nude beaches in the USA are Gunnison Beach, New Jersey, and Little Beach, Maui, Hawaii. We have focused a lot on Florida and California here, but do keep in mind that there are other great nudist resorts spread all over the country.

For a long time, Canada was competing with Iceland and the North Pole on our list of future nude vacation destinations. We know Canada from watching National Geographic documentaries with frozen lakes and snow-capped mountains and a bunch of large dangerous animals. It had never occurred to us that the country had anything even close to summer.
Here’s a fun fact: Did you know that Toronto is at about the same latitude as the south of France?
So yes, Canada does get a summer and even has quite some facilities for nudists. Most of these are located in the more southern states of the country. Ontario has the famous Bare Oaks Family Naturist Park and the (less famous but very idyllic) Sunward naturist resort. Among others. 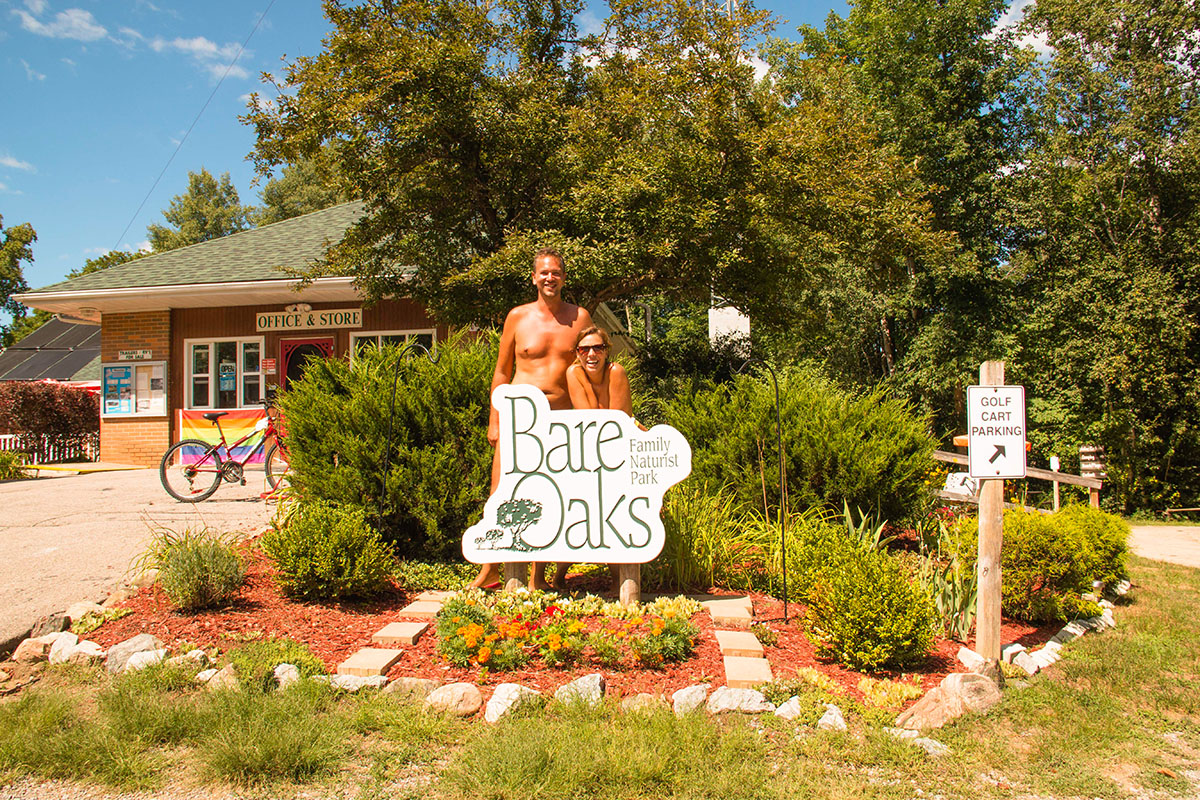 Quebec, the French(ish) speaking part of the country has several naturist resorts including the wonderful La Pommerie, and also British Columbia has a handful of naturist resorts. Several provinces have their own nude beach, Hanlan’s Point near Toronto is a popular one and so is Oka beach in Quebec. But the most beautiful one is said to be Wreck Beach near Vancouver. We, unfortunately, didn’t make it all the way down there so we can’t give you first-hand information but it once has been chosen as the third-best nude beach in the world. After Montalivet in France and Ocho Rios in Jamaica.

Nudism in Mexico and the Caribbean 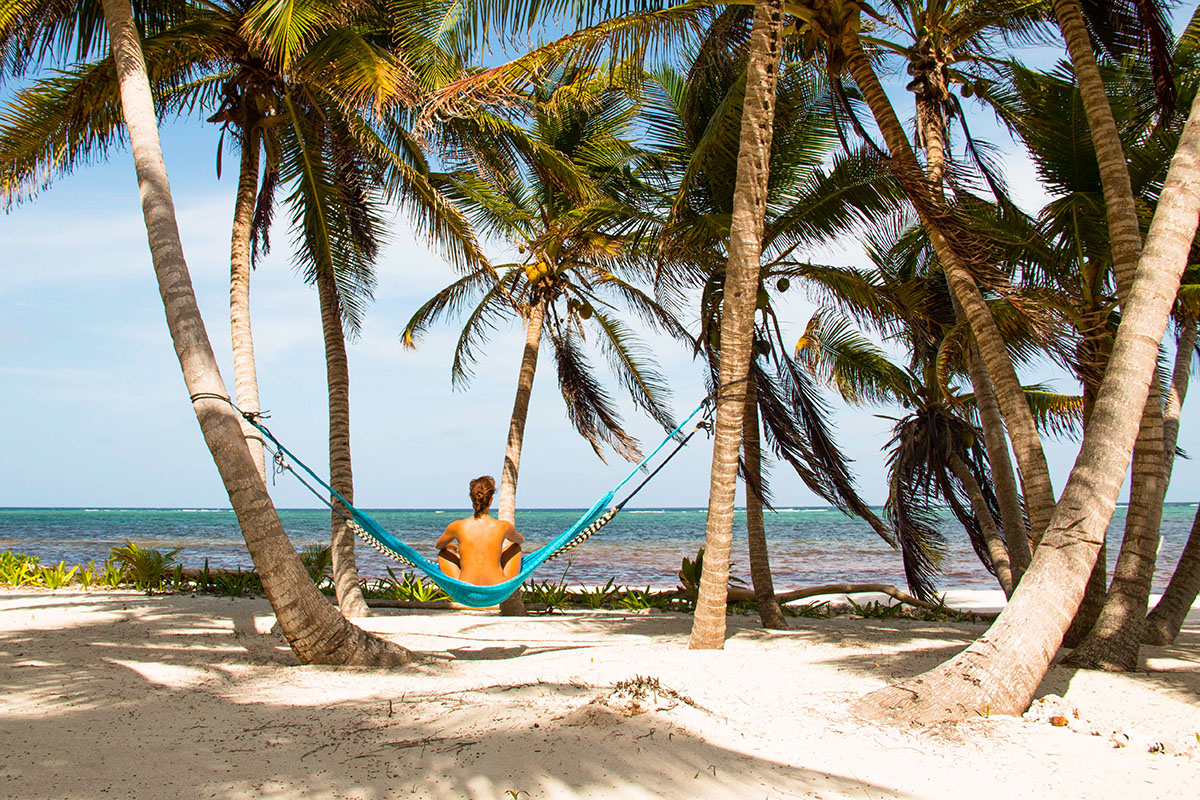 The best we found in Mexico came as a mix of the previous two: Playa Zipolite. A place that welcomes both local nudists as an increasing amount of foreign nude visitors and with which we will probably be in love until the rest of our lives. Basically, it’s nothing very special. A 1.5km clothing-optional beach in a small town on the Mexican Pacific coast. But the atmosphere has sucked us up in a way that every time when we make new plans they end with an “or… we could also go to Zipo…”. And then silence. 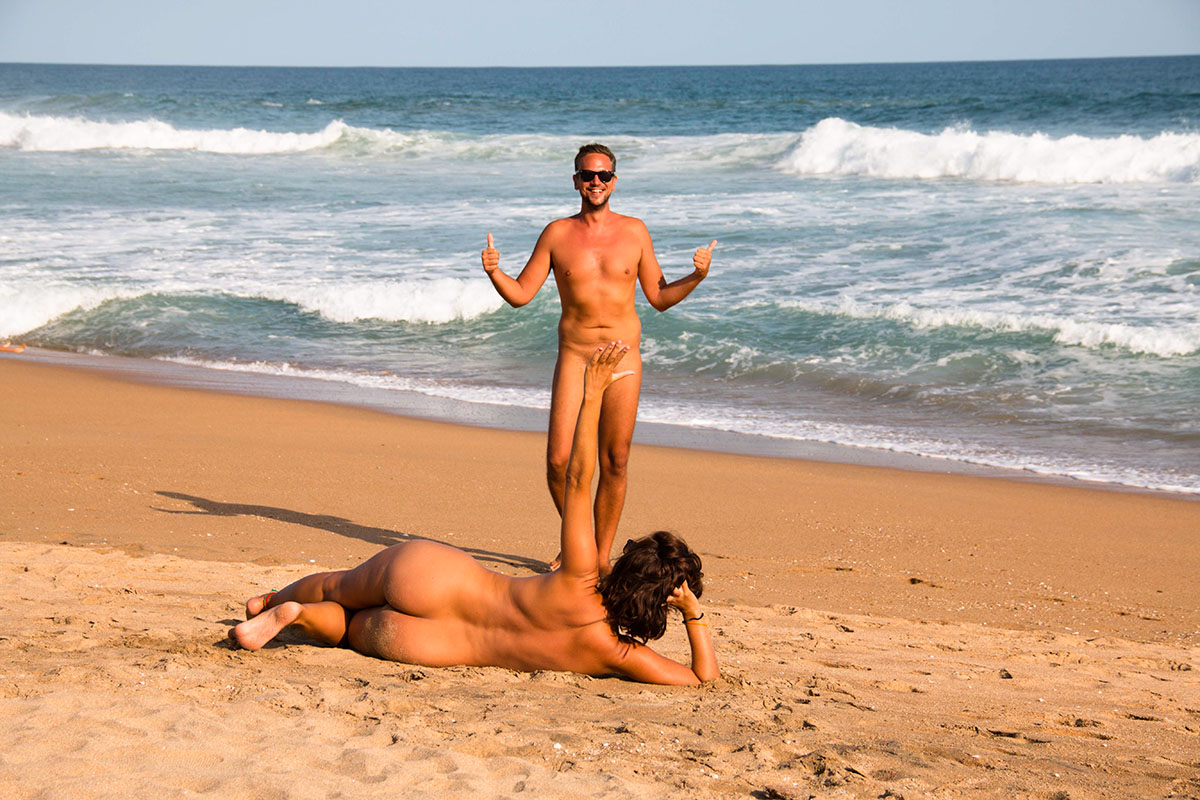 Other parts of the Caribbean lean much more towards nudism in the Mexican Rivièra. Top class all-inclusive nudist resorts like the Grand Lido or Couples resorts in Jamaica, nudist boutique hotels like Club Fantastico on St Martin, or the more lifestyle-oriented Hedonism II, also in Jamaica.
The most famous nudist resort of the Caribbean, Club Orient, has unfortunately been blown away by a hurricane. Its nude beach, Orient beach, still stands strong and attracts nudists from all over the world. Nude beaches can also be found on several other Caribbean islands.
If you don’t have much time but want to experience the best of the nude Caribbean, you might want to get on board the Bare Necessities Big Nude Boat. A naked cruise through the Caribbean originating from Florida.

When we ended up at a nudist gathering in Guadalajara, Mexico, one of the first things we noticed was the average age of the group. While we got used to being pretty much the youngest in many nudist resorts in the USA (except that time we hung out with Blake and Liz in the Olive Dell Ranch), now we felt like everyone was about our age. At the time we thought this was something typically Mexican. But it was not. We would see the same thing again in other countries of South America. 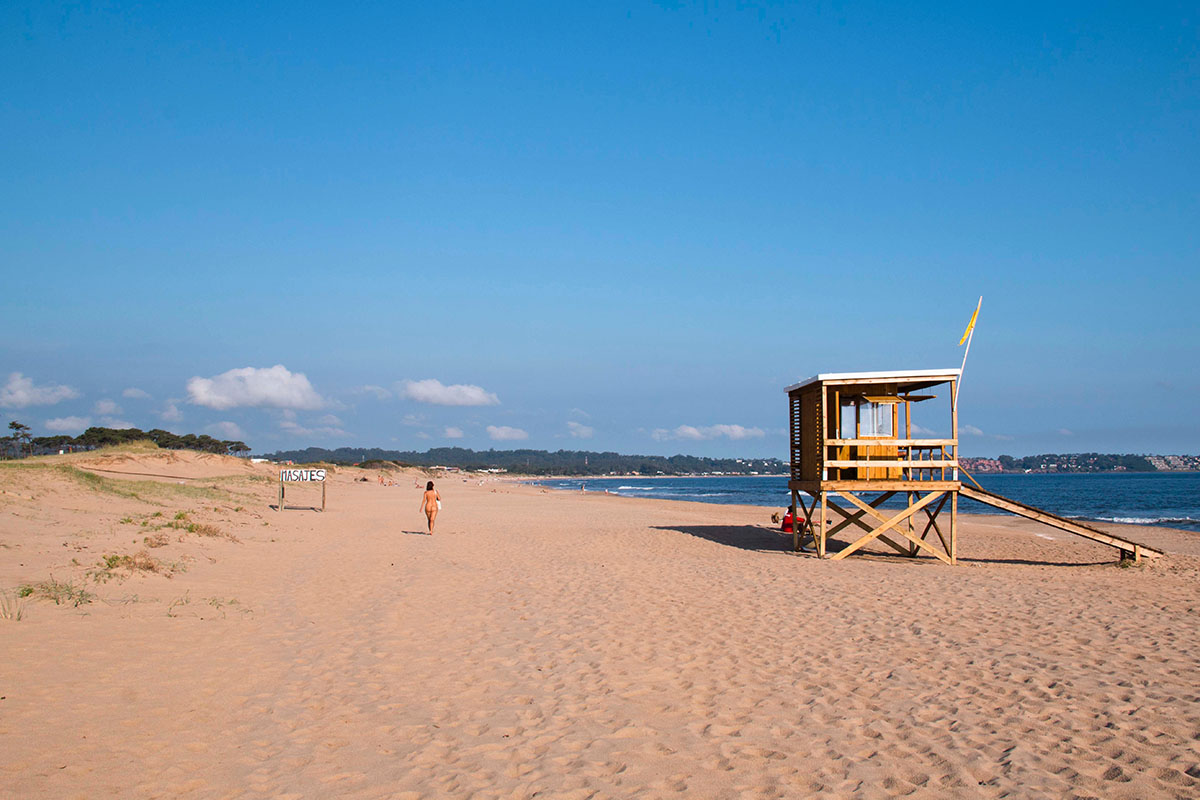 One reason why the average age of nudists in South America appears to be one or two generations younger than in northern America or Europe could be because nudism is rather new there. While our grandparents already knew (or could have known) about nudist resorts, the first more or less official nudist clubs in South America got established when we already got rid of our diapers. In South America, nudism is something for our generation. Which we could of course appreciate very much.
Nudist options in South America are still few though. But nevertheless very impressive. Brazil has only a handful of nudist resorts and another handful of nude beaches but one after the other appeared to be wonderful, spacious, and full of friendly nudists. Argentina has two official nude beaches, some “nudist houses” (which we, Europeans, would call local clubs) but also has the largest nudist resort in the world: Yatan Rumi. And Uruguay has a beautiful nude beach called Playa Chihuahua.
Everywhere else in South America we noticed that nudist communities are popping up and gaining new members. Chile, Argentina, Brazil, Uruguay, Peru, Colombia, and Venezuela have nudist associations of which we know. Some of the other countries might have one as well.
We wouldn’t be surprised if a new wave of young nudism would come from this part of the world.

Naturism and nudism outside of the resorts

Another big difference we noticed between the Americas and Europe are nude activities which are not necessarily linked to a certain nudist club or resort. Of course, there are World Naked Bike Rides in Europe, there are swim events or bowling tournaments and as mentioned in the previous post about naturism in Europe, the UK is has taken a leading role in nudist festivals. But there it stops. A nude barbecue that isn’t organized in a nudist club? We haven’t seen it in Europe (yet). But we did attend one in Mexico.
In Europe, it’s typical for a naturist club to have a property. Often it’s a campsite or at least a private place where naturists can get together. In the USA for example this is not so typical. There is the principle of landed clubs (which have their own domain) and non-landed clubs (which don’t have any property). From our experience, the non-landed clubs were much more interesting. They are forced to think out of the box. Nude laser tagging at a landed club? Not possible because they don’t have the infrastructure. Nude laser tagging with NitOC? Of course, they just hired a laser tagging place. 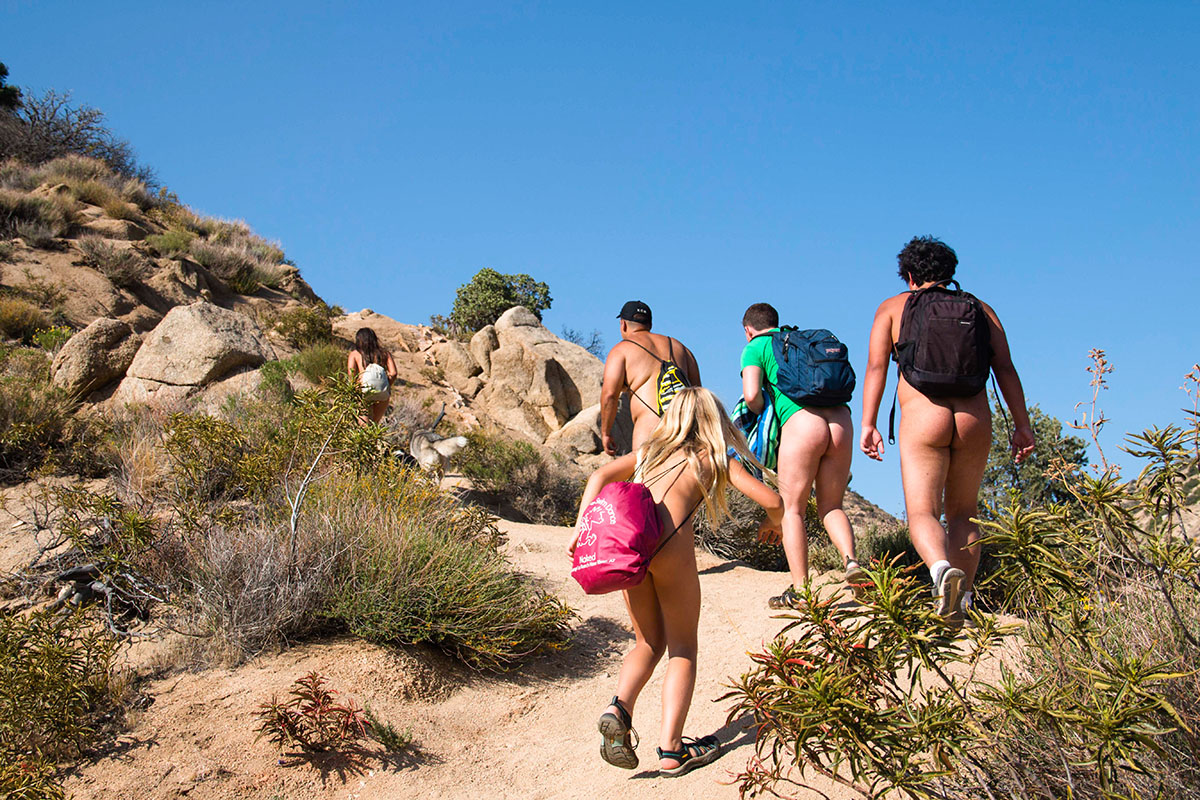 Before we went to the USA, the idea of non-landed clubs seemed like a huge disadvantage. But we had to change our opinion. Nude dinners at member’s houses, the laser tagging, nude hikes, trips to certain nude beaches, or clothing-optional hot springs. When you’re not stuck to a certain spot, the options are endless.

This is something we’ve noticed in South America as well. When there’s a group of enthusiastic nudists, everything is possible. We just make it work. There are nude dinners in Montevideo, nude games in the Amazon Rainforest, and nude gatherings in Santiago de Chile, Lima, Medellin, Bogota, and Caracas. Among probably many other cities.
While naturism/nudism may have started in Europe, we believe that it might be the Americas that will protect its future.

3 thoughts on “Nudism and Naturism around the World: The Americas”