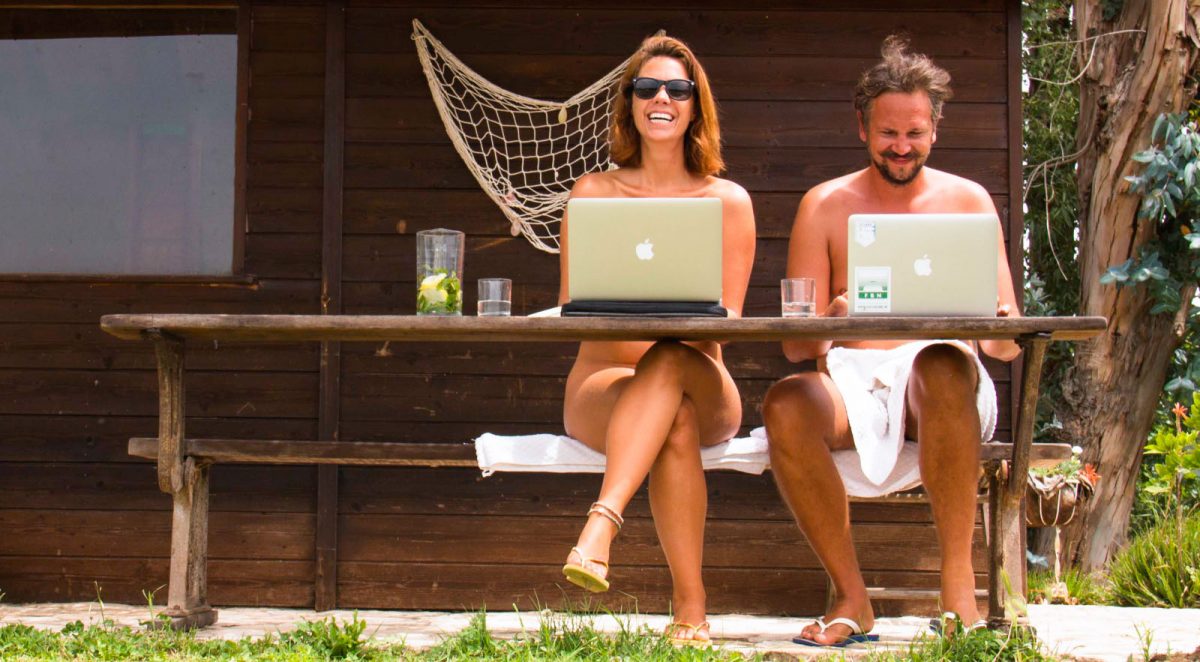 It’s that time of the year. Reindeers are making their nests on snow-covered roofs. Friendly bearded men in red pajamas are bringing joy to the families and Mariah Carey seems to be everywhere again. We know what that means. 2019 is about to end. Time to start making your new year’s resolutions. How many people are you going to make happy in 2020? Which foods and drinks are you going to leave behind? More exercise? Less smoking?
We can’t help you with that. But we can help you figure out which nudist blogs will be worth a read in the new year. Below are a number of nudist blogs that we’ll definitely keep an eye on in 2020.

Often people tell us things like “You must be the only couple who has visited so many nudist places around the world!”. Then we often smile and nod in agreement, but deep down we know that it’s not true. Dan and his partner have been traveling frequently to many nudists spots around the world for much longer than we have. Also their blog, The Meandering Naturist, is several years more mature than Naked Wanderings.
On The Meandering Naturist, Dan gives his unyielding opinion about naturist subjects in general and the naturist destinations he visits. No matter where he goes, his love for France always trickles through. But also faraway destinations like Thailand, Uruguay, and California have become familiar to him.

Nude and Happy is a rather new website, but the idea behind it has been living for a long time. Basically, it’s the English part of the popular French naturist blog Nu Et Heureux. While Nu Et Heureux used to be in both languages in the past, recently Nude and Happy got its own place in the nude blogging world.
As a strong promoter of naturism, Marc shares his ideas about every single aspect of our wonderful lifestyle on his blog. He likes to ask questions. Is there really such a difference between being naked and wearing a bathing suit? Isn’t naturism actually just a hobby? You can read all about it on Nude and Happy.
Also popular on this blog is the “nudist idea” series. 100 small blog posts about every single aspect of naturism, nudism, and life. If you ever thought that nudism is just a boring thing old people do, this series will definitely open your eyes. 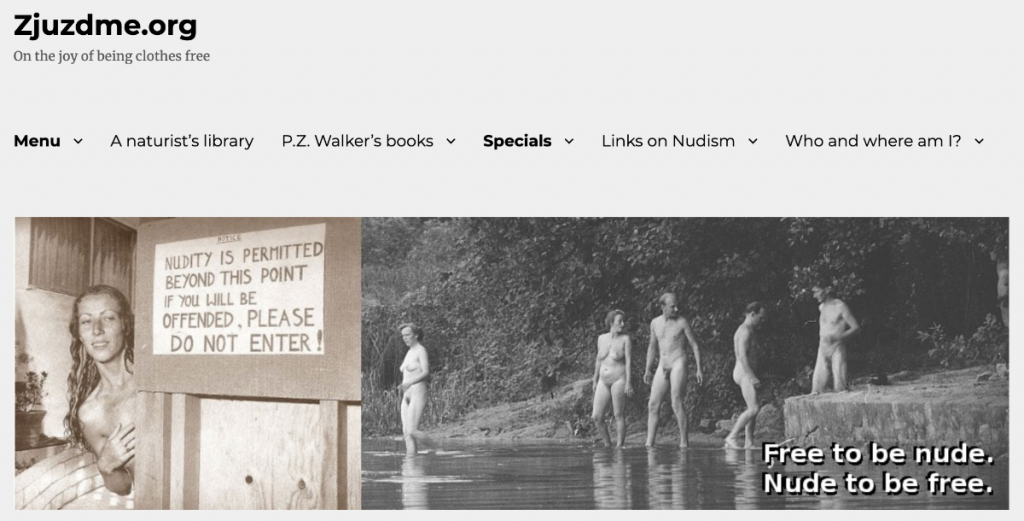 Often philosophic, often funny and often mind changing. Naturist Paul talks on his blog Zjuzdme about the beauty of the nude body and the strong connection between naturism and nature. He often brings up the advantages of being a naturist and being body confident in other aspects of life.
Paul is also an active promotor of naturism and now and then you’ll see his frustrations, with social media for example, trickly through in his writings. A popular part of his blog is the “Sunday Noon Nudist” where, with the help of a photo, he shows the world the beauty of naturism and the many things our lifestyle can include.

While originally a blog in Portuguese, Os Naturistas now also has a translate function so you can read it in French, Spanish, and English as well. Os Naturistas is a mix of everything that has to do with naturism. They are the number one resource for naturism in Brazil but also cover numerous other places in their blog posts.
Personally, Os Naturistas has helped us a lot while researching our naturist trip to Brazil. Not only about the nudist resorts and nude beaches but also to understand the general mentality around nudism in the country. Another interesting part of Os Naturistas is that they often cover stories about naturism that made the news. Providing their own opinions in the margins.

Our first big newcomers in the nudist blogosphere are the Nomadic Nudists. We’ve been following them from pretty much day one because we like their blogging style. Other than most other nudist bloggers, the Nomadic Nudists don’t write much about nudism itself. Their blog is a mixture between a travel blog and a personal blog. But because they’re avid nudists, their nude lifestyle is added to the mix in more or less every blog post.
They are the couple you wish you met at the bar during your next nakation, so you can hear their tales in real life. On their blog you’ll read stories about traveling with an RV, working as a digital nomad, how to avoid gawkers at the nude beach or how to get great dental care in Mexico. Just to give you an idea about the wide range of subjects. 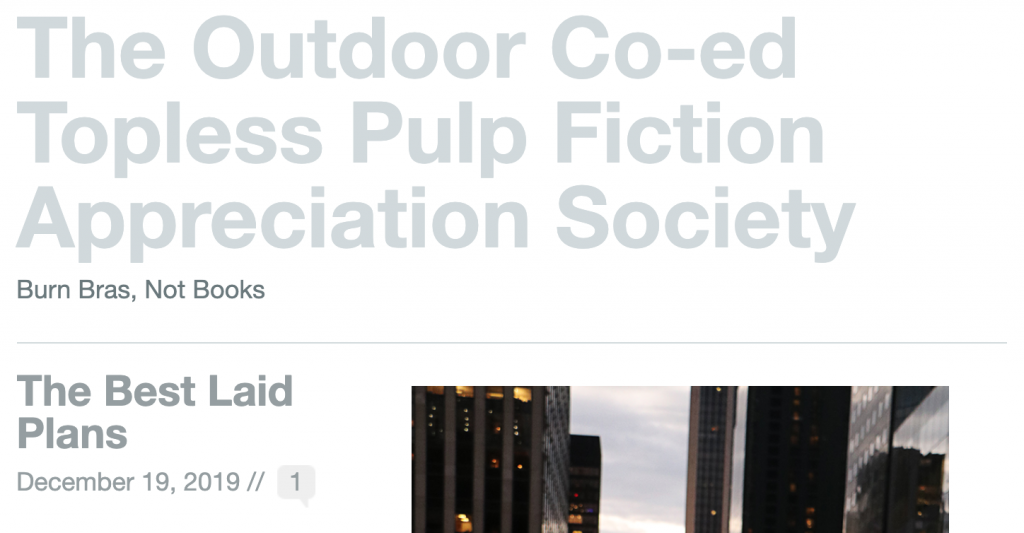 This list with nudist bloggers is of course far from complete. These are not the only nude bloggers out there. Instead, we wanted to list some that stick out for one reason or another. In this case, The Outdoor Co-ed Topless Pulp Fiction Appreciation Society definitely deserves a place here.
Honestly, in the beginning, we had our doubts. Every single one of their blog posts contains lots of pictures of beautiful young women hanging around in the nude or topless or sometimes in sexy lingerie. Did someone just open another box of wannabe porn models trying to get some fame under the name “nudist”?
After meeting some of the TOCTPFAS group in New York, we understood that our doubts were unfounded. This is exactly what makes them very special. TOCTPFAS is barely about naturism/nudism but rather about women’s rights. The right to be topless in Central Park but also the right to be whatever they want to be. The right to love and own their bodies. And the right to be sexy if they want to.

Another long-running naturist blog, but also special in its own kind is The Free Range Naturist. If you’ve ever been nude in a natural place in the USA and you thought that you’re probably the first who undressed there, think again. Chances are very high that the nude butts of the Free Range Naturist couple have passed by before you.
The Free Range Naturist is an excellent resource for those who like to be nude in the wild. They share trip reports of the many places they visited and lots of tips about nude hiking, nude camping, nude exploring, and how to survive in the wilderness without pants. 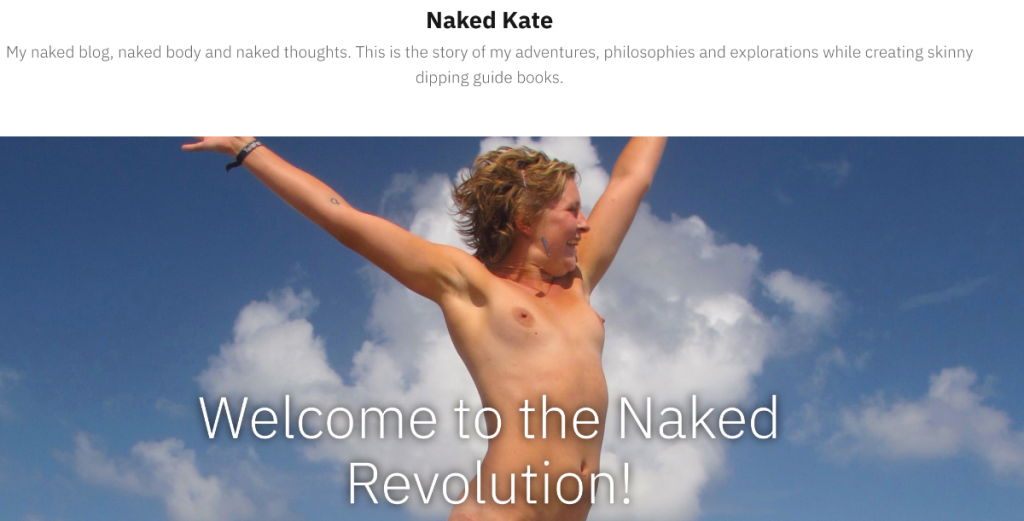 Naked Kate is the youngest addition to the list of nude bloggers, website-wise at least because at the time of writing this blog is less than 2 months young. We were hooked from the first blog post in which Kate talks about how she accidentally ran into one of her favorite travel writers in a cave in New Zealand. This writer happens to be writing a new book about the skinny dipping opportunities in the country. Is there any cooler way to get introduced to nudism?
It gets even better though. Kate, the writer, and some others team up and decide to join forces in the “NZ skinny dipping guide book” project. On Naked Kate she shares her stories about the places she finds and the experiences she has. If Naked Kate was a Netflix series, we’d be binge-watching it.

Last on this list is a blog that will definitely keep bringing more stories about nudism and tips for nudist travelers in 2020. Exactly, it’s our very own Naked Wanderings. We’re not going to tell you yet about all the cool things that are upcoming next year (basically because we don’t know most of them yet either) but we can assure you that there will be lots more of our naked wanderings. More naturist travel destinations, more nude beaches, more nudist resorts, more naturist guides, more ideas about nudism and naturism in general, and lots of other things.
If you happen to speak Dutch, you can even read more of our stories in our exclusive Dutch Naked Wanderings blog for Athena. And if for some weird reason, you would momentarily get enough of all those Naked Wanderings stories, the previously 8 blogs mentioned will definitely be more than enough reading material for 2020.