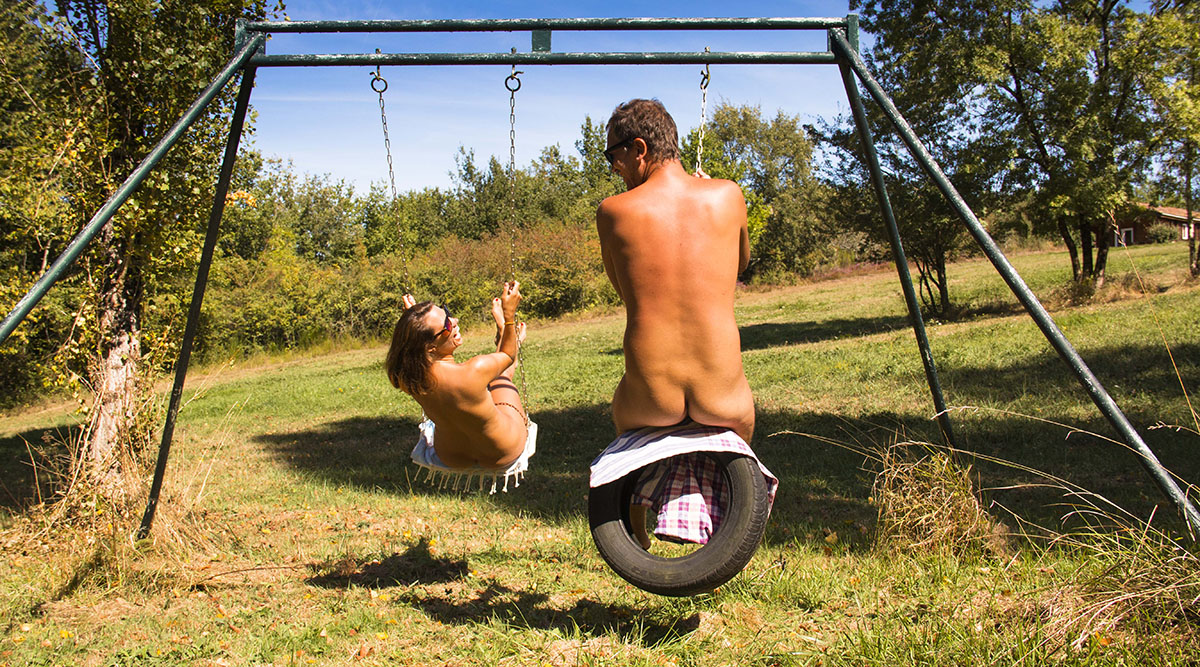 Spending your summer holiday at a naturist campsite does not always sound like the most fun. Unless you’re way in your eighties or your idea of the perfect getaway is spending days in a row singing songs at a bonfire without having electricity, let alone wifi (the horror!).
In many parts of the world, and then we’re pointing specifically towards you, Europe and the United States, above is indeed still the general opinion. We carry the burden of the nudist camps, or worse, the nudist colonies. Those are not fictional places that were born in somebody’s imagination. Nudist colonies did exist. What many people don’t know is that they are mostly a thing from the previous century.
Now we’re not going to tell you that every naturist campsite these days is hip and trendy, there certainly are some leftovers from the old days (we’ve stumbled upon them now and then). But generally speaking, most naturist campsites have turned into places which everyone can enjoy. And they have wifi.
But how on earth are you going to keep yourself busy all that time? We’ll give you some tips.

Relax and enjoy the sun

While naturist campsites have changed immensely during the last several decades, some of the basic ideas still stand strong. Enjoying the sun is one of them. In the early twentieth century naturism really started lifting off because some people noticed the positive effects of vitamin D, which you get from sunshine. You don’t have to be a scientist to understand that the more skin you expose to the sun, the more vitamin D you’ll be able to absorb. Keep in mind that this theory comes from Germany, a country that is not exactly known for its huge amounts of sunshine. Basically they figured: when the sun is out, we have to get as much vitamin D as possible!
Many doctors these days will disagree with those old ideas and will tell you that skin that is exposed to a lot of sunshine is at a high risk of getting skin cancer. And of course, they’re right. But the vitamin D thing is also true. The best thing you can do is meet in the middle, don’t expose yourself to too much direct sunlight in the heat of the afternoon but better go for mornings and evenings. And use sunblock.
Whether you’re a strong believer in gaining energy from the sun or not, it doesn’t really matter. Spending some hours relaxing nude in the sun is just great. Period.

Another habit that comes from the early beginnings of naturism is doing sports. Naturism back in the day was all about a healthy lifestyle. Although we appreciate that the rules about the consumption of meat and alcohol are something from the past, we’re also happy that this one stood strong. Because nude sports are fun!
We have to admit though that we didn’t always think so. The first couple of times when we saw a bunch of naked people playing volleyball we found it all.. Ehm.. A bit weird. If you’ve never seen people doing sports in the nude, especially sports that ask for a lot of body movements, it’s hard to keep your eye on the ball. This is another one of those things in naturism that’s awkward in the beginning but to which you easily get used after a while.
Watching a nude volleyball game is fun and many naturists are quite good players. But participating is much more fun! It’s something you just have to try to understand. You don’t only get the best out of your body movements (the Greeks were right about this) but you’ll also get a feeling of freedom which you rarely experienced before. And we noticed that there’s less cheating in nude sports. Consider that a bonus. Petanque has long been a favorite sport among naturists but it’s losing ground lately. While most naturist campsites still have a petanque court, many other sports can also be practiced as well. In the USA and Canada nude volleyball is a big thing for example. In Europe, we’ve seen an uprise of nude tennis and nude jogging and in France, almost every naturist campsite has nude archery. Why archery? We have no idea.

Have a skinny dip

While swimming can technically be categorized under sports, we thought that nude swimming deserves a mention of its own. For many, skinny dipping is their first step into social nudity. Especially around the age of 16 after having a couple of beers. Unfortunately, it’s often also their last experience and when someone brings that cheerful evening up later there are often red cheeks and “shhhhhhh” sounds. A pity really. Because swimming in the buff is one of the best experiences. If someone would ask us for one activity to convince them to become nudists, skinny dipping it certainly is. You really have no idea what a burden a bathing suit can be until you try swimming without.
Swimming is another favorite among naturists and many naturist campings provide the necessary facilities. From a small swimming pool to huge swimming paradises complete with glides and slides and other acrobatic features. Something that also can be found a lot, and what we prefer even more than a swimming paradise is a natural water. Many naturist campings have their own lake or river where you can enjoy the beauty of nature in your most natural way.
If you think nude swimming is fun, how about this: After five minutes in the sun you’re completely dry! Try that with a bathing suit!

Clean your body and your mind

As a joke we could now tell you something like “clean your body: have a shower!” Ha ha ha! But we’re not going to do that. Although we wouldn’t be that far off. When was the last time you’ve taken an outdoor shower? In our clothed world that became pretty much impossible except if you live on a huge farm or somewhere deep in the jungle. And let’s face it, showering on a campsite is not fun. The shower cabins are always too small, you always have to get dressed again because you forgot your soap and one or more pieces of clothing will always get wet. Most likely either your towel or your underwear. Or both. So let us tell you, communal showers are great and especially when they’re outside.
Many naturist campsites provide even better ways to clean your body and while you’re at it your mind as well. Saunas are very popular and come in all different types. Ranging from the typical northern European ones (not Ikea) to very cool self-built ones (also not Ikea) to a traditional temazcal (certainly not Ikea). Often there will also be hot tubs and massage services and the really large campsites sometimes have complete spa facilities with steam rooms and hot stone things and beauty this and that. If an afternoon in the sun or a skinny dip can’t get you relaxed, these certainly will.

Meet the other naturists

Another typical thing about naturists is that we are social beings. In a world where people seem to become more and more individualistic, the naturist society still remains a very social thing. We dare to say that after a couple of visits to your local naturist club you’ll probably know more people than in your own neighborhood. There are two main reasons for that: One is that we all have a common ground, we like to be naked. But that’s not any different than a tennis or golf club. What does make the difference is that being naked puts us all on an equal level on the imaginary social ladder. Bill at the golf club is often envied because he’s wearing again a new Armani outfit. Bill at the nudist club doesn’t wear an outfit.
While nudist clubs often organize activities that make it easier to bond with others, at the campsite it’s slightly different. The best places to make new friends are either nearby your tent (“hi! Neighbour, nice tent you have there!”) or at the bar (“hi! Neighbour, nice wine you have there”). Talking about wine, one of the first “ancient principles” of naturism that has gotten rid of was the ban on alcohol. We can understand why, naturists do like a glass now and then. Don’t get us wrong, we don’t want to imply that naturists are alcoholics but it’s just part of the whole “bon vivant” kind of thing. A nice time in the nude, nice people, nice conversations, a nice meal, and a nice drink. Or two. Or five.

One thing to keep in mind is that it’s not because you’re planning a vacation to a naturist campsite that they’ll lock the gate behind you only to open it again when your vacation is over. Although many naturists prefer to spend all their time in the nude on the campsite, there are many others who you’ll only see in the mornings and evenings. It’s a vacation after all and there are probably a lot of nice things to see and do in the area.
Since we have no clue where you’re planning to go we can’t really give you any tips about this. Except that it might be worthwhile to ask at the reception if there are other nude opportunities in the area. Chances are that there will be a good nude beach. Or an event in some naturist club. Some countries, like the Netherlands for example, have laws that allow you to hike naked in all public forests. Just make sure to ask first to avoid having the police chase your naked behind. That could really ruin your nude vacation.