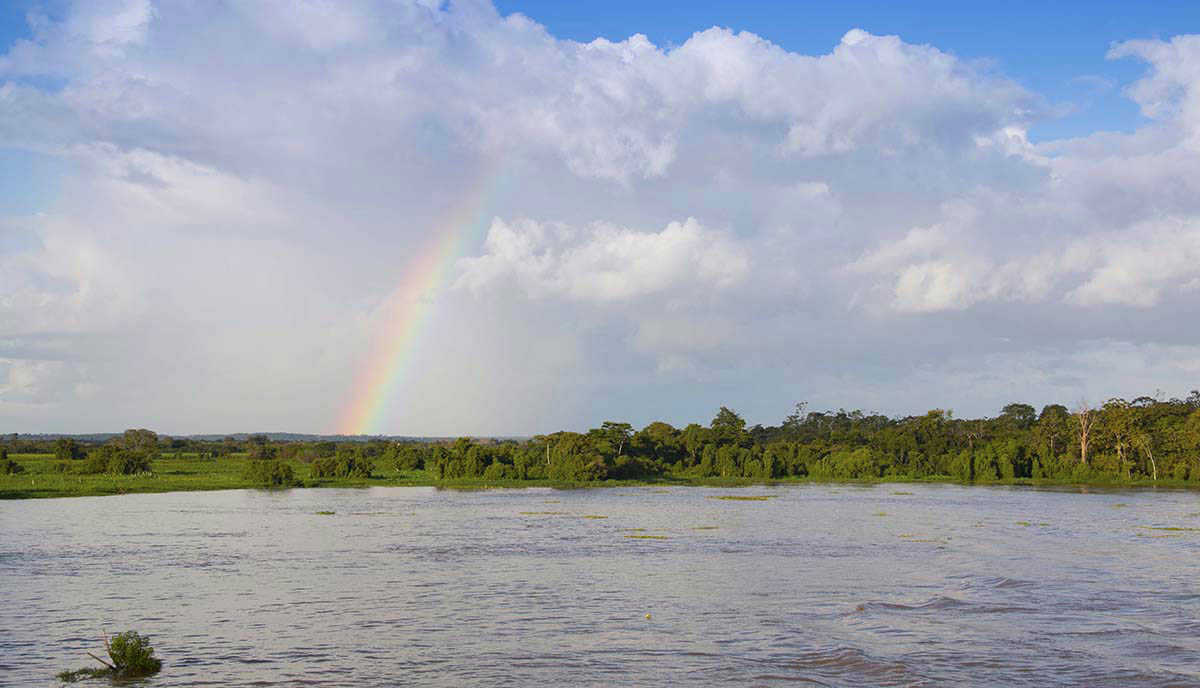 If this doesn’t sound like an amazing nudist bucket list item, we don’t know what does. The Amazon Rainforest speaks to the imagination of many. It’s called the lung of the earth and accounts for more than half of the world’s remaining rainforest. There are over 40 000 different plants and 2.5 million insect species (okay the latter might not sound that attractive to some but you have to admit that it’s an impressive number). And the Amazon river which flows thru the forest is considered the longest river in the world. We’ve all seen hours of documentaries about this place and David Attenborough has probably been here a million times. But we doubt that he ever practiced naturism in such a natural place. That’s exactly what we were planning to do.
We also had another item on our bucket list to check off. While we’ve spent lots of time at the beautiful Brazilian nude beaches and in some impressive naturist resorts in the country, we still wanted to participate in a meetup of a local naturist club. Most naturist clubs in Brazil get together about once a month, which made it difficult for us to get to the right place at the right moment. Our time in the country is limited and we kept failing to get our agendas right. Until now. We would be in the Amazon exactly when GRAUNA, the local naturist club, was having their monthly event. And we didn’t want to miss that for the world. 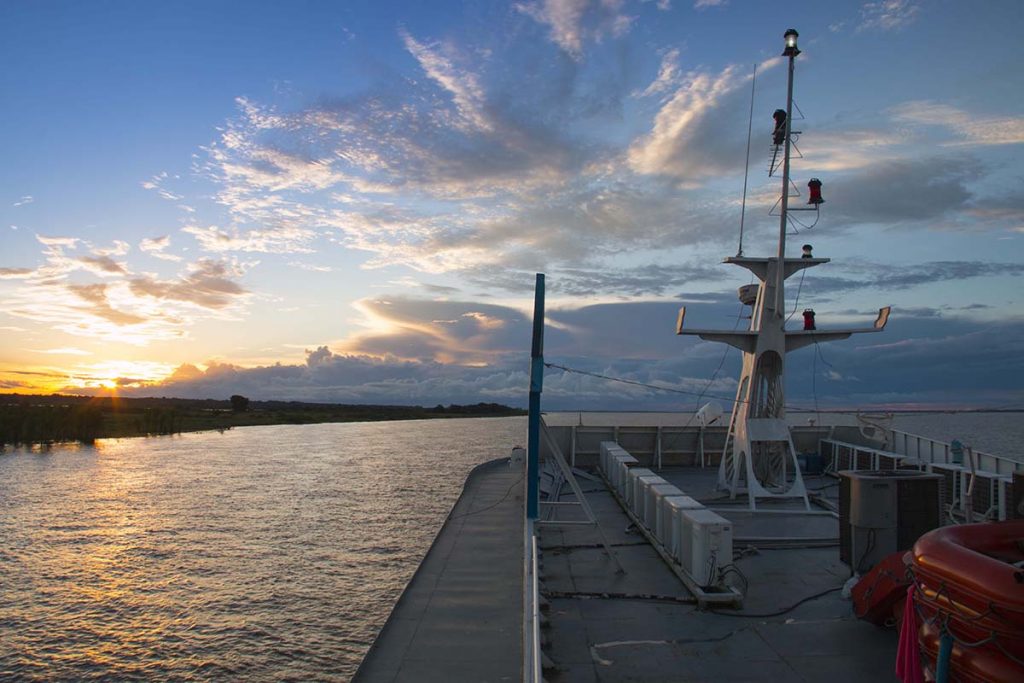 The slow boat from Belém to Manaus

There are two ways to get from Belém, at the coast, to Manaus in the middle of the rainforest. By far the easiest and practical way is a two-hour flight. The other option is a six-day boat trip. Before you start dreaming about a luxury cruise on the Amazon river, we’ll pop that bubble for you. These are not cruise ships. They are technically cargo ships that reserve some spots on the upper decks to hang a hammock. A hammock that you have to bring yourself by the way.
Because this boat trip happens to also be more expensive than low-cost airlines, you need to have a very good reason not to fly. Some could consider the ecological aspect. Others may be afraid of flying or need to get off at some desolated village along the way with no connection to an airport. We don’t doubt that some also take the boat because they’re pretty sure that they’ll never make it through airport security. And some have this romantic idea of spending six days on a boat with a bunch of strangers on the Amazon river. Indeed, consider us the latter. 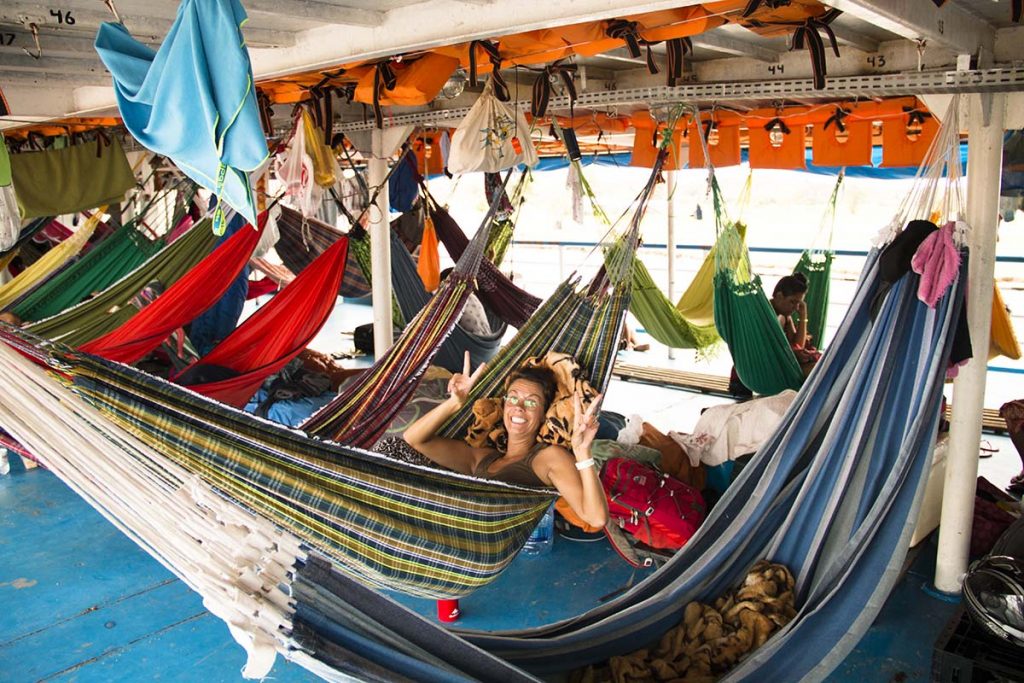 The discomfort of clothes appears once again

To draw you a quick image of what this boat trip looks like, imagine a deck of a boat full of hammocks. Basically a really large dormitory. There are a handful of shower/toilet cabins where you can’t stand straight and which are completely wet 24/7. Then there’s a bar and a restaurant which serves always the same one dish. Twice per day. Every day. And that’s it. All that’s left is a lot of time to relax, read and think. Think about how this trip could be so much more comfortable if we were allowed to be nude. Seriously. There’s not a square centimeter of privacy on this boat and yet you have to find a way to change clothes without shocking anyone. There’s no way to keep your towel and clothes dry when taking a shower. But you have to take them inside with you anyway. And then there’s the top deck where you could perfectly work on your equal tan… if you were allowed to.
Although the scenery for most of the days is just plain river and forest (hey, who would have guessed…), now and then we passed by remote communities or standalone houses along the river. Because the passage of our boat is one of the top events of the week for people who live there, they turn around to have a look and children run outside to wave at us. We couldn’t believe to see them all clothed. Are they kidding? They live in a place where it’s either very hot or raining. And they basically have no neighbors. It’s another proof that some time in history people decided to start wearing clothes all the time. Even though the weather and the circumstances make it a rather irrational decision. One thing we do know for sure is that if we ever move to a house next to the Amazon river, the first thing we do is burn all our clothes. Or at least most of them. 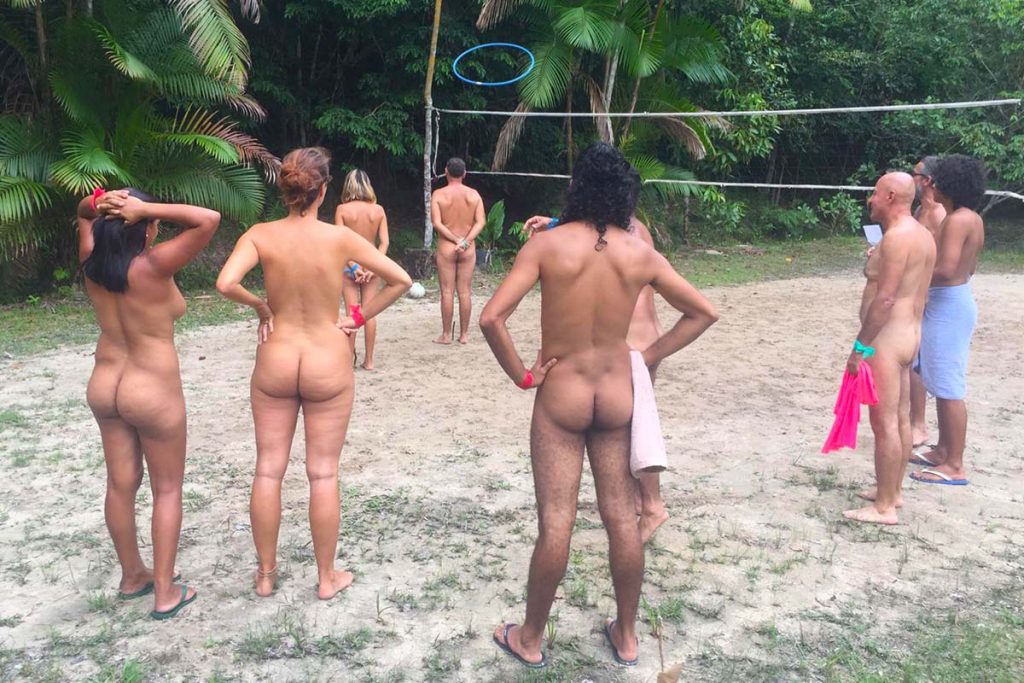 Meeting up with the Amazon naturists

Six days in the Amazon Rainforest and yet the only moments we had been naked were in those cramped shower cabins on the boat. Clearly it was time for a change. When we had asked GRAUNA if we could join their event they were very welcoming. Of course, we could come! They had already given us some instructions about which bus to take but by the time we arrived in Manaus, we received a WhatsApp message from a guy called Bene offering to pick us up. A little downside was that we had to be ready at 8 in the morning on a Sunday (if you ever thought that being a naturist blogger is an easy life, think again). But we never say no to a free ride and at 8 am we joined Bene, a Brazilian about our age.
We had little idea about what to expect and were very pleased to end up at a place which kind of looked like a rural naturist camping with several relax areas and a swimming pool. Although it was only about nine in the morning, a bunch of naked people were already engaged in a volleyball game. And there it happened. We dropped our bags and our clothes. Bucket list item #271 CHECKED!
Although GRAUNA is a rather small group that typically receives about 20 members for their monthly events, we found yet again a great atmosphere. All that we have learned during our 3 months in Brazil proved to be also true in the Amazon. The friendliness and hospitality that characterize the Brazilians and a great mix in both gender and age. We immediately felt that it was going to be a great day. 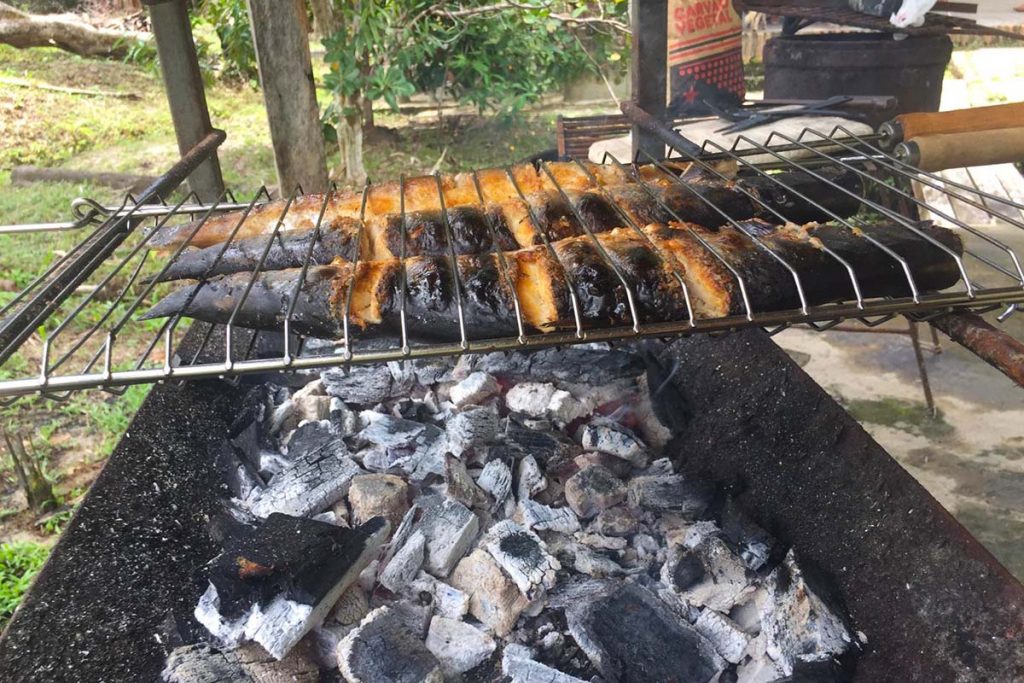 Luckily for us, Bene as well as several others speak English. Which made things a lot easier although a language barrier can be fun as well as long as you just embrace it and go with the flow. After an hour or so of meeting everyone and exchanging hugs (Brazilians are real huggers) and words in different languages, someone gave us a colored bracelet and suddenly we were part of one of the 3 teams. The red one. We still didn’t have a clue about what was going to happen. When someone called our names to put a spoon with a boiled egg in our mouth it dawned on us… We’re going to play nude games!
The egg run was the first game and probably also the only one our team won. We failed big time at the swimming contest and the darts game and although the game where we had to throw hula hoops around living pins was hilarious, we didn’t make many points.
The grand finale was the hardest one, at least for us. It’s a game where we were given a range of numbers with which we had to make a word based on the corresponding letters on a cell phone. Given the fact that we only know a handful of Portuguese words, we were not exactly the best help for our team.
Team Red ended at a comfortable third place. Unfortunately, there were only three teams. 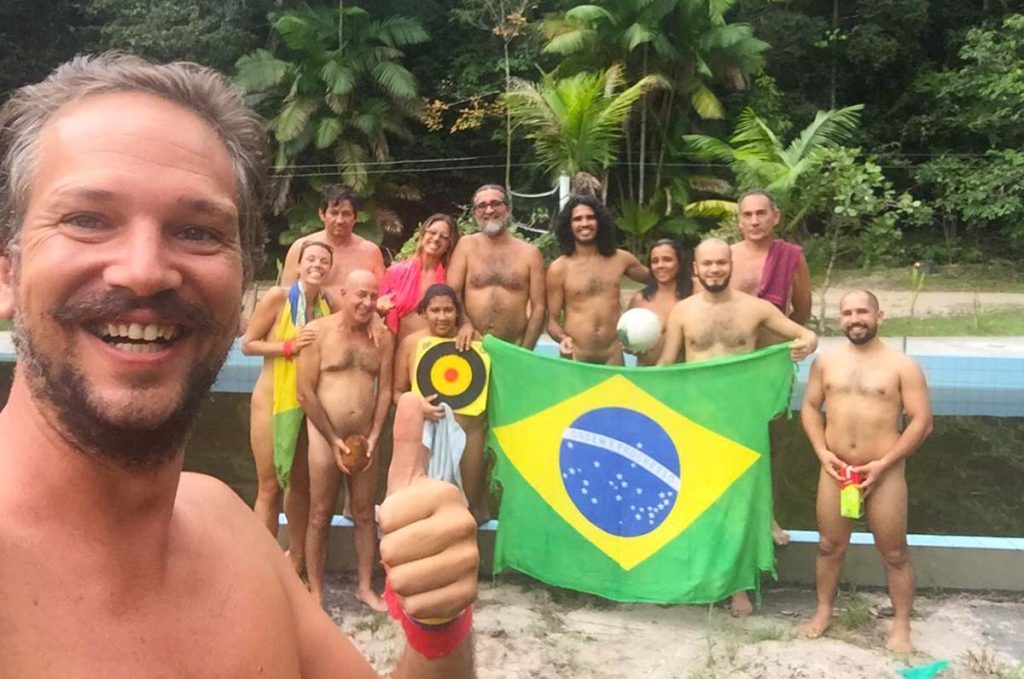 Whether nude or clothed, a constant at every Brazilian gathering is food. Delicious and lots of it. In typical Amazon-style we had a barbecue of river fish. Although we can’t remember the name it was some of the best fish we had in a long time. If not ever. After some more chatting and hanging and general nude relaxing, dark clouds gave the sign that it was time to leave. This is the RAINforest after all. So we concluded a great nude day in the Amazon with more hugs and got back to the city.
If you’re a naturist in Manaus or just a visitor with “getting naked in the Amazon” on your bucket list, we can very much recommend you to get in touch with GRAUNA. They’re are a very fun group to spend your Sundays with. Even though it means that you might have to get up at 8 in the morning.
Naturist Destinations ➡️ Brazil

4 thoughts on “Naked In the Amazon”