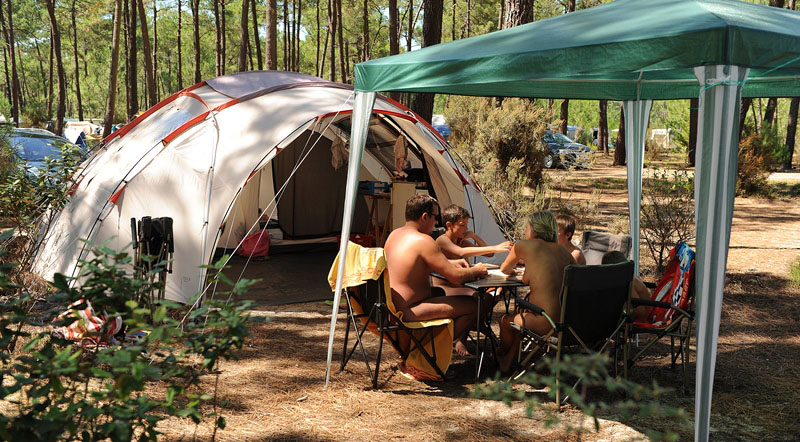 The difference in nudist campings is enormous, ranging from the small 10 spot campground which normally caters only to members and once in a while a guest to huge naturist villages like Cap d’agde in France.
The choice can be difficult, which kind of nude camping to choose?
Both types have of course their advantages and disadvantages, and what seems to be an advantage for one isn’t necessarily the same for someone else.
To help you find out what fits best in your perfect naked camping vacation, we’ll give you some tips to find the best place.

It’s easy to imagine that the amount of facilities on the larger nude campings is much bigger than on the smaller ones, but that doesn’t make them better. Swimming pools for example. Most nudist campings have one but the smaller campings often won’t have a 25 meter pool. Or a bunch of slides. What’s the need for that when you only have about 20 guests at one time? Unless you’re planning to practice your swimming skills, you’ll have enough space in the smaller pool anyway. When, on the other hand, you’re bringing the kids, it might be better to look out for a place with a decent water paradise.
Also if you’re planning to spend your whole nude vacation inside the camping, just only one swimming pool may not satisfy your needs. The larger campings often offer more possibilities to keep you busy. Think about bicycle rental, volleyball and tennis courts, playgrounds, relax areas, a spa, massage services, you name it.
Also the sanitary facilities may differ. We have noticed that in the smaller campings it’s more likely to have a queue at the shower block than at the large ones, just because there aren’t that many showers. On the other hand, at the smaller campings the showers and toilets tend to be cleaner because if you made a mess, chances are that people will know that it was you. 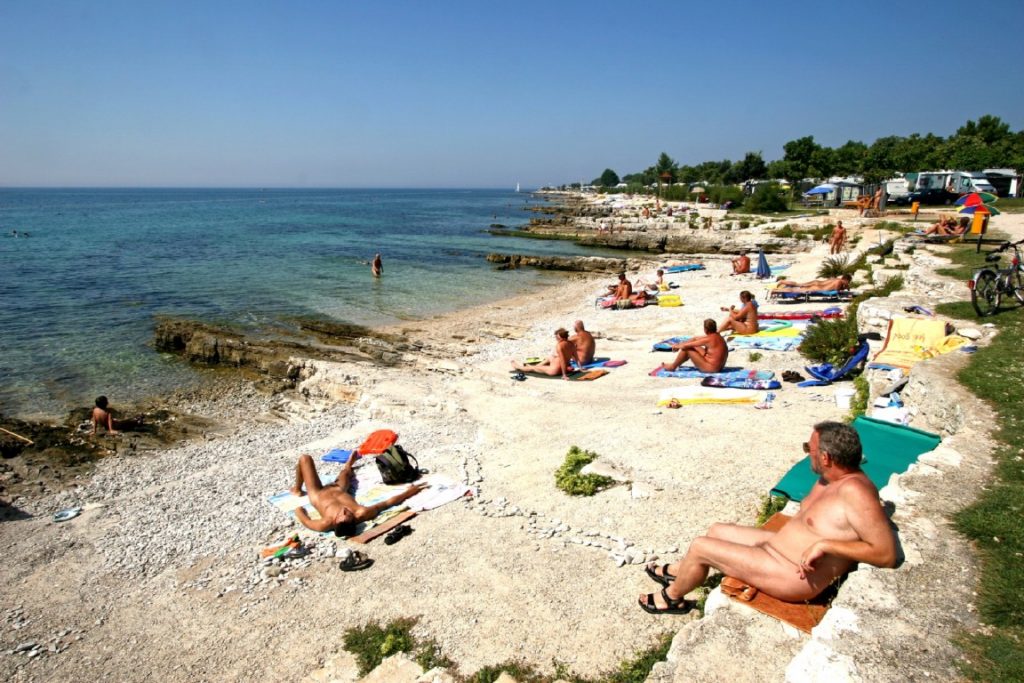 Where are the different nudist campings located?

If you’re going for the amazing, ocean side locations, you’ll probably end up in the larger campings. Just because they have the money to buy the expensive grounds. But amazing isn’t always better. When many others want to go to the same location as yourself and you’re packed like sardines on that beautiful nude beach during high season, it suddenly isn’t that amazing anymore.
The smaller campings are often located in the woods or in other secluded areas where peace and quietness is the norm. We have to say that peace and quietness is important in almost any nudist camping we’ve ever visited. It’s part of being a nudist, so don’t worry too much about that. 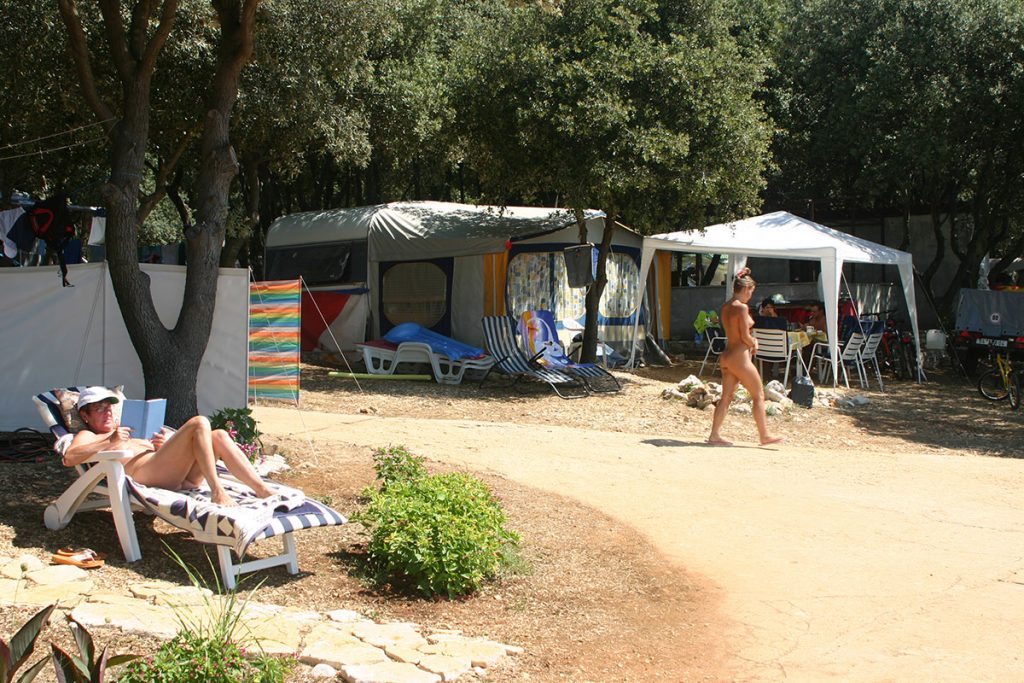 Who visits which kind of nudist camping?

Being in our early thirties, we’re kind of the lost generation of nudists. It’s often quite difficult to find other nudists our age. At the smaller campings this is even more difficult. It happened more than once that we were the only ones around of our age. We’re not saying that it matters that much, but still it’s always pleasant to meet others who are from the same generation.
At the larger nude campings you’ll find a huge variation in age. Beginning nudists in their early twenties, families with children, people in their thirties, forties, fifties, whateverties. There’s also more variation in where people come from. On a small camping in the north of France we were more than once surrounded by Dutch (nothing against the Dutch though) while on the larger camping next door there were Germans, English, Italians, even other Belgians.

A difference in the kind of nudist visitors

One thing we did notice a lot during our travels is that the amount of clothes that are still worn on a nudist camping can be related to its size. At the smaller nudist campings for example, most of the time everyone is a 24/7 nudist. meaning that they’ll take off their clothes when they enter the place and put them back on just before they drive through the gate again. Or when they get too cold of course. When inside the camping, everyone will be naked most of the time.
At the larger nudist campings you may find more of a clothing optional atmosphere. Yes, most of the visitors will be naked, but certainly not all of the time. Some will keep their clothes on until they get to the pool or the nude beach, others remain clothed because their partner is a nudist and they’re only joining. We’ve even heard about textiles who go to nudist camps because they like the serenity but never really undress. This doesn’t mean that you can’t be naked all the time, it just means that you might be naked among clothed now and then, which is for some (especially beginning nudists) sometimes an issue. 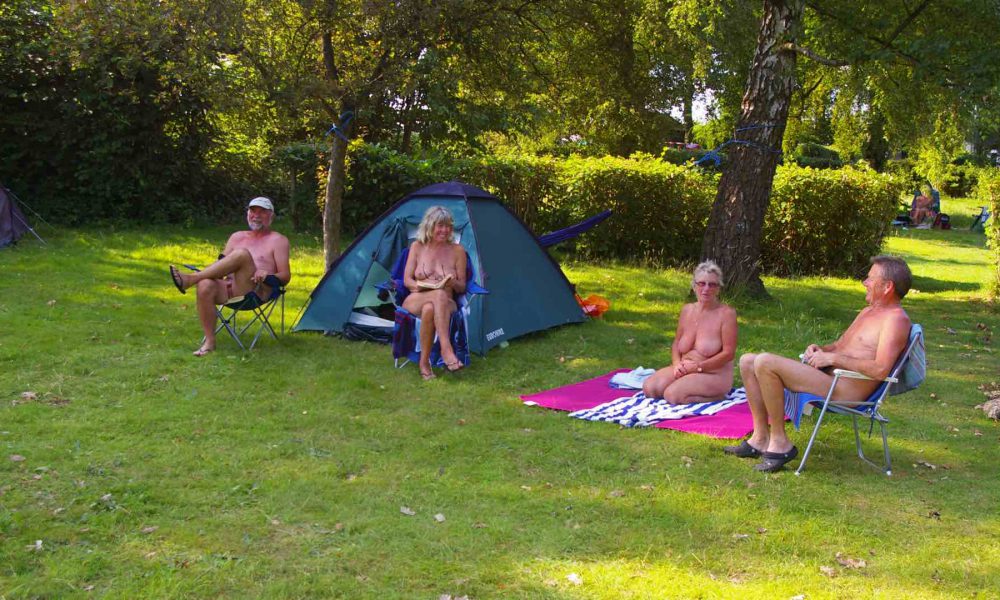 The social factor on at the larger nudist campings does get much lower than at the smaller ones. A a small or medium sized nude camping, after a day or two you often know everyone, it’s a very social thing. At the larger campings however people are more to themselves. You might get to know the persons in the tent next to yours and maybe meet some other nudists at the bar, but that’s about it. There’s much less of a community feeling.
Especially for nudists traveling alone, this is an important factor. At smaller nude campings you’ll be much more likely to get in touch with other nudists than at the big ones. But of course at the big ones you’ll have much more things that will keep you busy when you find nobody to talk too…
The choice is yours.
Find the best naturist and nudist campgrounds on NUDE


Picture credit: The photos in this post are coming from Google and Twitter. If you find one of yourself and you don’t want it to be on our blog, let us know and we’ll remove it.

7 thoughts on “Size does matter: Big vs small nudist camps”