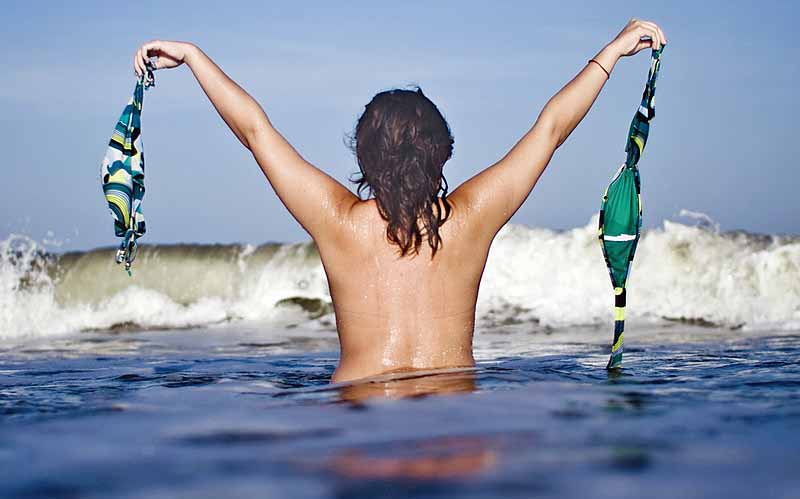 Nudism is good for your body and your mental state, trust us, you’ll love it!
Look at us, we’re all naked, why aren’t you?
Take the plunge, get naked!
Nobody will look at you!
There’s no need to be insecure, take those pants off!
We, the nudists, feel like being nude is the most normal thing to do. It’s our natural state of being, it’s how we were born. For us, nudity is nothing to be ashamed about, getting undressed among others is not something we have to give a second thought. It’s one of the best feelings we know.
So we try to pass our knowledge to the others, always with the best intentions, but rarely realise how confident we appear to be. And sometimes this has a counterproductive effect. Just because we look so confident, the other feels even more insecure and is even more reluctant to join us. 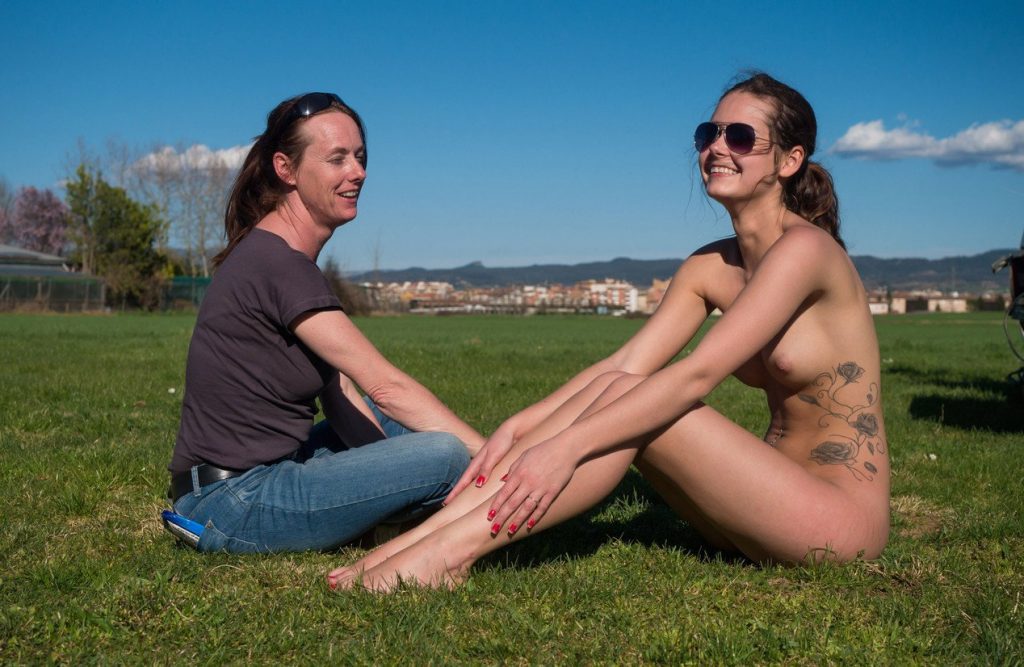 The mental step
Getting naked among others is a physical action that takes less than a minute, often just seconds. But the first time comes with a mental preparation of days, weeks, for some even years.
When we talk about being nude it’s like we talk about the most normal thing in the world.
What we did last weekend? Well we slept in, had a late breakfast and then spent the afternoon at the nude beach. If there were others? Yeah plenty of them, but what did you expect…such a sunny day, we were almost packed like sardines.
Often we forget how terrifying this may sound to the ones who haven’t taken the first step yet. A whole afternoon? Completely naked? Among that many others?
We all come from different backgrounds and we all carry a 2000-year-old backpack full of prejudices against nudity. Since we were little kids (well, those who weren’t raised in a nudist family of course), the government, the church, our parents, and the public opinion have been planting ideas into our heads that public nudity is something not done, something bad. The naked body is something sacred or sinful (depends on who you ask) that should be kept to yourself and your partner.
And then come the industries who will tell you how ugly you really are. And then you read in this article that supermodel Ulrike Hoyer was fired by Louis Vuitton because she’s too fat. Oh my god… If she’s too fat then what am I?
“Luckily” the industries offer you a solution. You have to wear this or that dress, you need to take this or that diet. Have some fat sucked out, get your boobs lifted, have your wrinkles removed and buy that expensive purse that will take away the attention of your body. Only then you will look like… well… we’ll leave that in the middle. 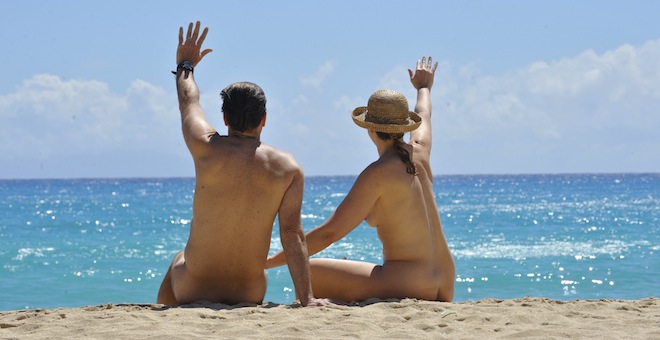 And then you meet Nick and Lins saying “Come on, get naked, it’s no big deal”.
We’ve all been there
Some won’t admit it, some may have actually forgotten it, but most nudists will tell you that their first time was terrifying. You come to a place you’ve never been before, you have no idea of the rules, the habits, the do’s and don’ts, and you don’t know anyone. And above all that, everyone, including yourself, will be completely naked. 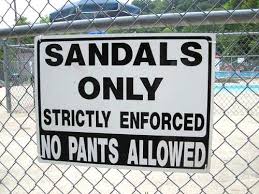 You think about Eve and her apple, your mother telling you to get dressed before you leave your room, all those body parts that don’t look like those in the magazines and all the denigrating jokes that are made about them. You’re happy that you’re still wearing pants because you’re about to shit them.
We were no exception, you can read about our first time here. We were pretty scared, although we were in a favorable position. We weren’t raised in a nudist family, but both our parents never made a big fuss about nudity. As long as it stayed behind closed doors. We were in our late twenties, had average bodies and hadn’t developed many issues about them. But still.. our legs were shaking.
Be ready to be vulnerable
Our body and our brain are the two things that define who we really are. And yet we lie about both of them. Constantly. Lying about our brain is easy, because it’s mostly on the inside. The things that do reach the outside can be manipulated with our mouth. We decide what comes out and what stays in. When you’re at the bar with some colleagues, how many of you will admit that they didn’t understand a certain word? Or didn’t get the joke? Exactly.
Lying about our body is more difficult, but we have clothes to do that for us. Or we distract the attention to our purse, our watch or our brand new car. We build an artificial wall around ourselves so we don’t have to show who we really are. Because by looking at our body you can tell a lot about us: if we’re into sports, if we have an office job, if we have given birth, if we have been eating healthy lately and so on.
By taking off your clothes, you’re breaking down that wall. Brick by brick. Until everyone can see who you really are. You’ll be completely vulnerable. 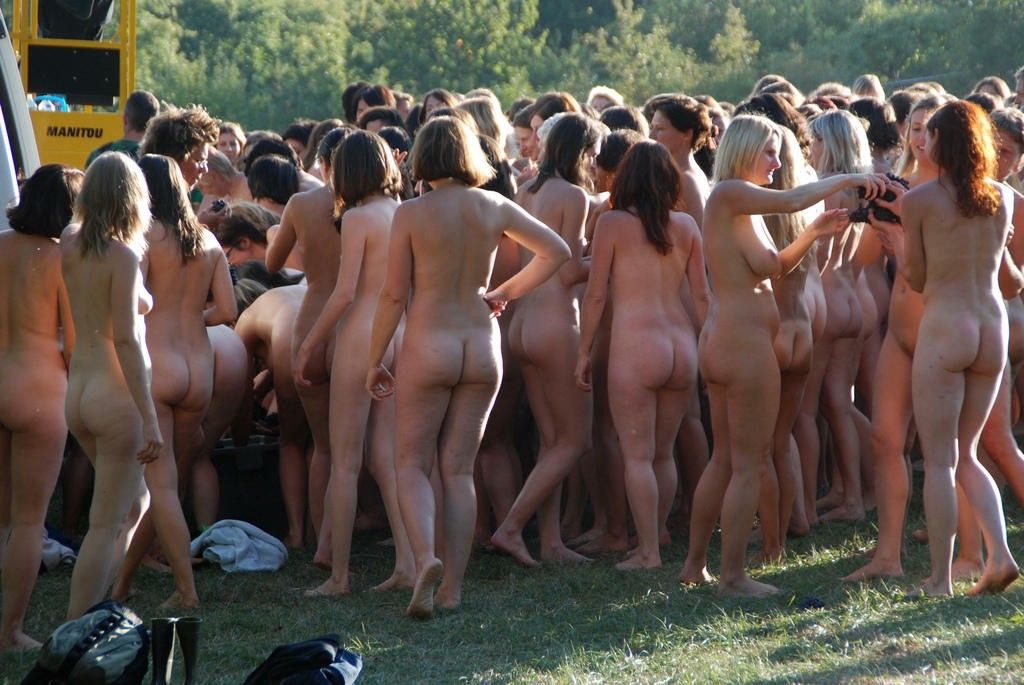 Okay, this probably doesn’t help you much over your fear, but listen to this. Everyone else does exactly the same. The only difference is that they don’t make a big deal out about it anymore because they’ve gotten used to it. They’re used to being vulnerable among others who are as vulnerable as them. And it liberated them. A feeling which they, and eventually you too, carry along to the “outside world” as well.
When you have to do a big presentation, people will tell you that you have to imagine your crowd naked. That’s because up there on the stage you’ll feel vulnerable. If you see everyone else in an equally vulnerable state you will be able to relax.
So we wish we could tell you that it really means nothing to take of your clothes, because it does. It’s a big step. But if you’re in a right state of mind, you will love it. At least we did.
Picture credit: The photos in this post are coming from Google and Twitter. If you find one of yourself and you don’t want it to be on our blog, let us know and we’ll remove it.