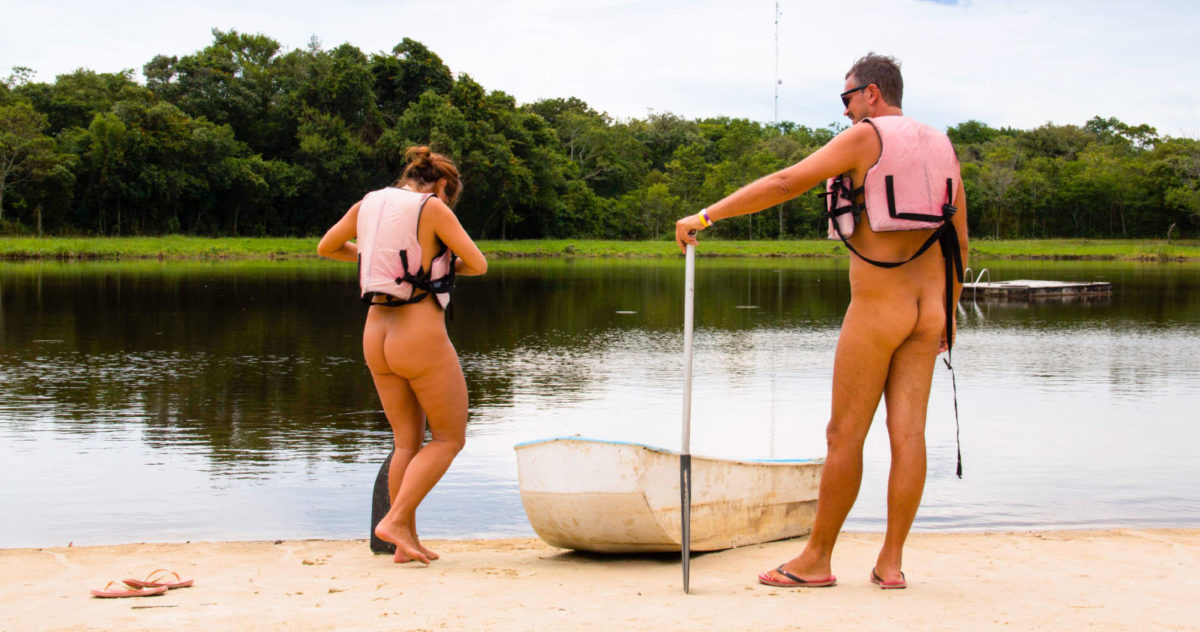 Chances are that an invisible virus has seriously messed up your naturist travel plans for this summer. Maybe you were already on the lookout for a new destination, or for another travel period. It may not always seem like this, but in normal circumstances, it’s possible to get naked somewhere around the world at any given time. In this blog post, we’ll give you some tips for excellent naturist destinations for every month of the year.

January: Nude down under

While outside nudity is not an option in most of the northern hemisphere, the summer gets at its best in January down under. Official nude beaches can be found in every Australian state except for Queensland and definitely in New Zealand as well. Both countries have a variety of naturist resorts and an abundance of natural places where you can enjoy nature in your birthday suit.
January is also the month when most events for naturists happen in both Australia and New Zealand. If you want a fresh (and especially a nude) start of the year, down under is where you want to be.
❤️ Read more about naturism in Australia and New Zealand.

In recent years, Mexico has become the crown jewel of naturism in Latin America. The country caters to naturists traveling on every possible budget, from the cheap naturist hostels in Zipolite to the all-inclusive clothing-optional resorts in the Riviera Maya.
Every month is a good month to have a naturist vacation in Mexico, but only in February, you’ll get the chance to participate in the Zipolite Nudist Festival. Three days of nude activities on Mexico’s most famous nude beach.
❤️ Read more about naturism in Mexico.

There are quite some misunderstandings when it comes to naturism in Brazil. Most of them are related to Carnaval. Some think that, because of the abundance of naked breasts during Carnaval, Brazil must be naturist heaven. Others believe that, because of the abundance of sensuality during Carnaval, it must be impossible for Brazilians to disconnect nudity from sex. The answer can be found in the middle. Naturist resorts and nude beaches are not as plenty as some would think, but the ones that do exist provide a genuine naturist experience.
March is an excellent month to visit Brazil. The warm summer months have heated up the Atlantic ocean and the excellent weather will make sure that your naturist vacation in Brazil is unforgettable.
❤️ Read more about naturism in Brazil.

April: Getting naked at the Spanish Costas

While most naturist resorts in Europe are still finishing their annual cleanup in April, Spain is already prepared for the first nude sunbathers. Especially in the provinces Andalucia, Murcia and Valencia it’s not uncommon to have enough sunshine in April to spend most of your days outside without clothes. And then we’re not even mentioning the Canary Islands, which get decent naturist weather year-round.
Spain provides a large variety in naturist accommodation, ranging from idyllic campgrounds to bed and breakfasts, self-catering villas, guesthouses and hotels.
❤️ Read more about naturism in Spain.

May: Nude camping in Croatia

It’s often said that Croatia was the first country in Europe where commercial naturist resorts opened their doors. All thanks to late King Edward VIII, who loved to take his mistress skinny dipping on the Croatian island of Rab, back in the early 20th century. Today, lots of the Croatian beaches can be considered clothing optional and large naturist campings have been popping up on the Istria peninsula and the Croatian islands.
If you travel to Croatia in May, you’ll escape the heat and the tourism of the summer and get the chance to camp in green pinewoods and skinny dip in the emerald-colored waters of the Adriatic Sea.
❤️ Read more about naturism in Croatia.

June: Getting naked in Italy

On the other side of the Adriatic Sea lays a country of which it’s hard to imagine that public nudity was forbidden until the early 21st century. Only little more than a decade later, naturist resorts are popping up everywhere around Italy and nude beaches gain in popularity year after year.
During the summer months, Italy tends to be overrun by tourists, therefore it’s much better to visit the country in the early or late season. June is our preferred month to visit Italy as the country is still green and the views are absolutely magnificent.
❤️ Read more about naturism in Italy.

July: Active naturism in the UK

In the UK? We know, the country of the Queen is probably not the first place that comes to mind when thinking about a naturist vacation. The weather is often a hit or miss and the offer of commercial naturist resorts is not plenty. But then again, there’s no law against public nudity in the UK, so every centimeter of the more than 30 000 kilometers of British coastline can be considered a nude beach.
It gets even better. The UK has recently been taking huge steps when it comes to organizing naturist events. The most popular one, Nudefest, is typically organized in the first half of July (dates for 2020 will be different due to COVID-19) and pretty much every weekend during the summer months it’s possible to attend a World Naked Bike Ride in a British city.
❤️ Read more about naturism in the UK.

France is the world’s most touristic country and also for the naked tourist, the options are endless. The country counts over 250 naturist resorts and clubs and several amazing nude beaches. France is also the country where the term “naturist village” was invented. Unfortunately, this happened at the infamous Cap d’Agde but we can tell you that there are several other naturist villages in France where you won’t be expected to wear clothes at any point in your vacation.
August is the top month of tourism in France. The country will get crowded but it’s also the month when most things are happening.
❤️ Read more about naturism in France.

Greece has a long time history of being accepting toward nudity on the beach. Even though the country doesn’t count more than 5 official nude beaches, the list of unofficial ones is incalculable. The naturist website of Captain Barefoot is a great resource if you want to get nude at any of the amazing Greek beaches.
Naturist resorts in Greece are not plenty, but several exist on the mainland and the islands. Among which the popular Vassaliki resort and Vritomartis. September is the perfect month to visit Greece as the weather is still agreeable and most of the other tourists have gone back home.
❤️ Read more about naturism in Greece.

October: Nude in nature in Portugal

If there’s one country that puts the “nature” back in naturism, it must be Portugal. Naturist resorts can be found around the country, from the mountains in the north to hilly Alentejo and sandy Algarve. And then there are the nude beaches, which are among the most stunning ones we’ve ever seen. Even the three nude beaches around Lisbon, the country’s capital, just blew us away.
Portugal is one of Europe’s most southern countries and enjoys pretty much agreeable weather year-round. This makes Portugal an excellent destination for those who want to absorb some extra vitamin D in autumn.
❤️ Read more about naturism in Portugal.

For a long time, Asia has been running behind when it comes to social nudity. But not anymore! In little more than a decade, Thailand has profiled itself as a premium naturist vacation destination. Naturist resorts are spread around the country and provide a luxurious environment for the nude traveler.
November is the start of the dry season in Thailand, which makes sure that you get warm dry weather and green surrounding nature.
❤️ Read more about naturism in Thailand.

There’s only one country in the African continent where naturism is not only common but has been practiced for a long time. A variety of naturist resorts in South Africa will definitely provide something to fulfill your needs, but the country also has something that no other naturist destination in the world can offer: Nude Safaris.
Sun Eden resort is one of the organizers of these nude drives through the savannah in search of animals in their most natural state while you’re in exactly the same state. How close to nature can one get? December is great to visit South Africa as you can expect warm and dry weather.
❤️ Read more about naturism in South Africa.