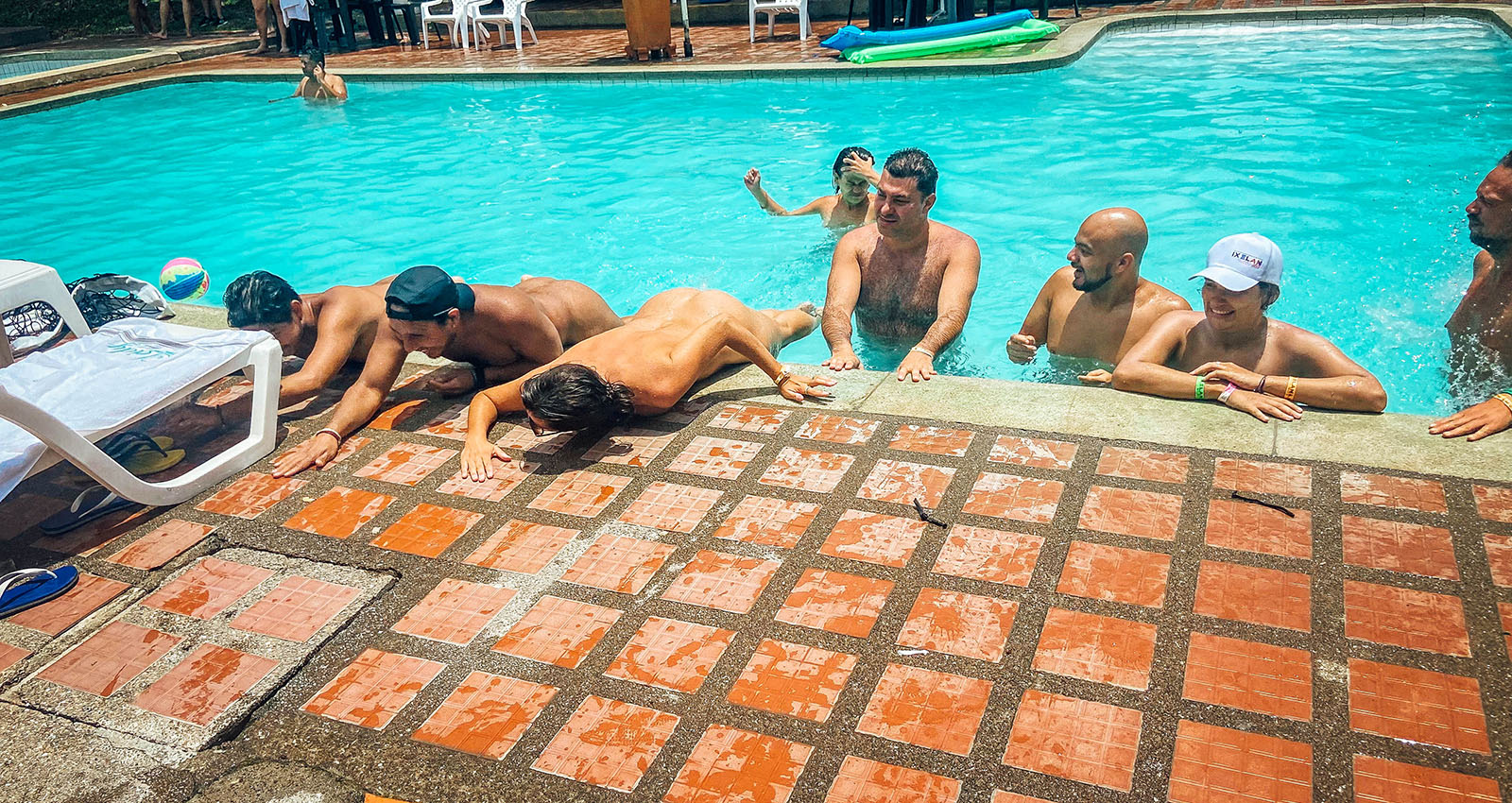 When you think about naturist destinations, countries like Colombia, Peru, or Bolivia probably aren’t the first that pop into mind. And if they do, it’s probably more in the sense of “Wouldn’t it be great if there was naturism in Ecuador?”. Well, we can tell you, there is. And not just in the aforementioned countries, but also in several other parts of Latin America.
Don’t expect Caribbean-style resorts or French-style village-sized campsites though. Naturism in Latin America mostly exists on beaches and in small clubs. It’s also something rather new in this part of the world. Only two decades ago, except in Brazil, naturism didn’t even exist in most of Latin America. So we were wondering how much this “new naturism” is different from naturism as we know it. And we knew the best place to figure this out.

Naturism doesn’t only exist in Latin America, it’s also well organized in associations, federations, and a confederation called CLANUD that covers all these organizations. Every two years, CLANUD organizes its Latin American congress called ELAN. We have been to naturist congresses before, and those often felt more like joining a political debate group than a fun event. But our friends of the naturist association Otro Cuento in Medellin (Colombia), who organized this year’s congress, had promised us that it would be different than anything we had participated in before. We happily believed them and jumped on a plane to Colombia.
From the first moment, we knew that we had made the right decision. Instead of arriving in a boring conference room, we were sent to a circus tent in the center of Medellin. As the whole place was rented, clothes quickly disappeared into bags. A number of welcome messages were followed by a true circus show and then we were directed onto the bus for a quick tour of the city and then towards a local museum where we could enjoy a naked museum tour. The next day we moved to a hotel outside of the city where the actual event would happen. 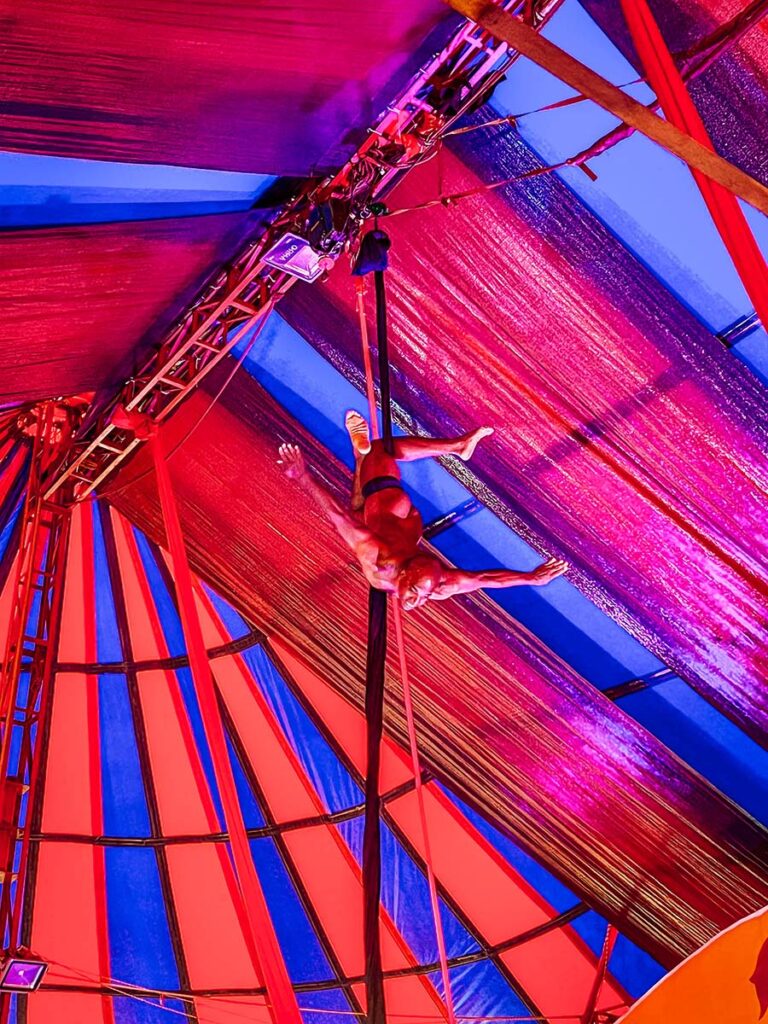 On that first day of the event, we already realized that Latin American naturism might be different than in other parts of the world. Of course, we also know naked museum visits and other activities in Europe and the USA, but these are rather the exception. Here, however, those even happen during the most important nudist event on the continent.
One reason for this is that most nudist associations in Latin America are non-landed clubs. They don’t have a private domain to organize their events, so they are constantly looking for venues that would be open to receiving a bunch of naked people. One would think that this limits their options, but instead it makes space for a lot of creativity. A club linked to a resort can only organize events that are possible inside the resort. A non-landed club that has some engaged members, can basically rent every space and turn it naturist.
Another reason is probably that because the naturist movement is so young in this part of the world, they skipped all the traditional activities like petanque or volleyball and moved directly to more modern things like yoga, dinners, and museum visits. 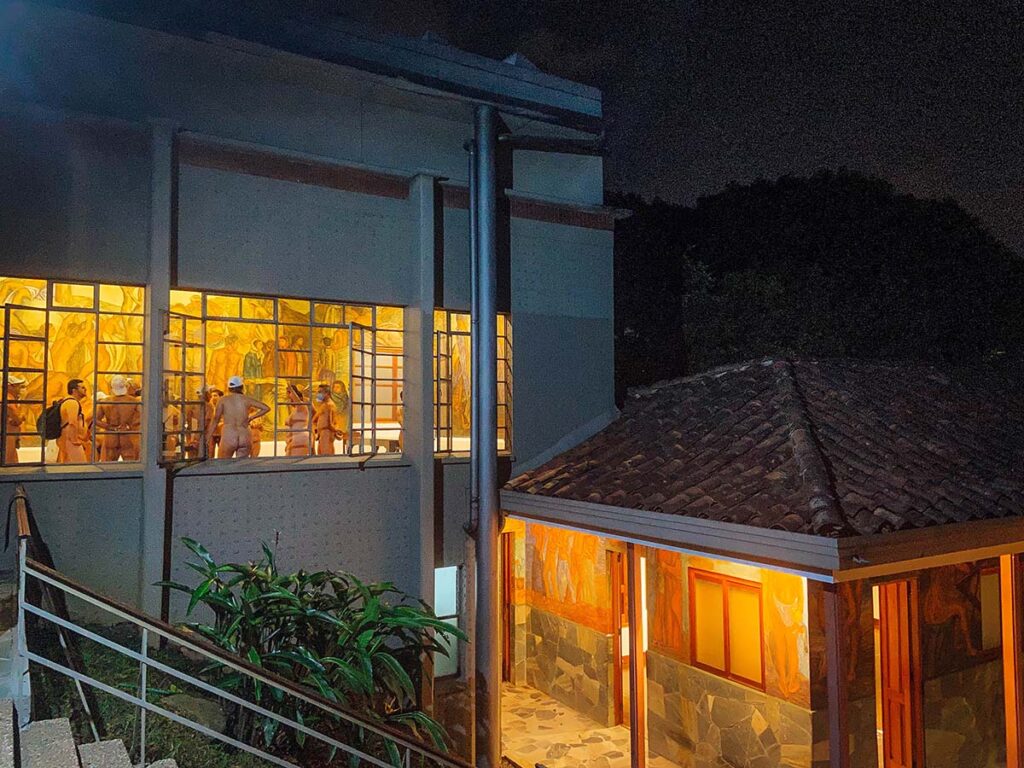 Who are the Latin American Naturists?

The best parts of any naturist congress happen when the congress isn’t really happening. During the INF congresses in which we participated, this translated into late-night drinks at the bar. Way too late-night, actually, but those were the only times when we were not sitting in a meeting room listening to official speeches. Things at the ELAN congress were slightly different. The official parts were not more than 2 times 1.5 hours per day, which gave a lot of free time to relax, swim, and talk to others.
At first sight, we already noticed the age and gender balances. When it comes to age, we think that we fell exactly in the middle. It was refreshing to see how people who are quite a bit younger than us were taking the lead in naturist organizations. Gender-wise, there were about 70% men and 30% women. Not exactly a perfect balance, but many of the female participants seemed to have a board function in one of the organizations.
When it comes to the reason to become a naturist, some main points definitely stuck out: The return to nature, body positivity, and a revolution against ancient standards and beliefs. All things we could very well understand. Beauty standards are a huge thing in Latin America, often fed by machismo. Religion and governments lead by ancient examples, and most Latin American naturists seem to live in cities. 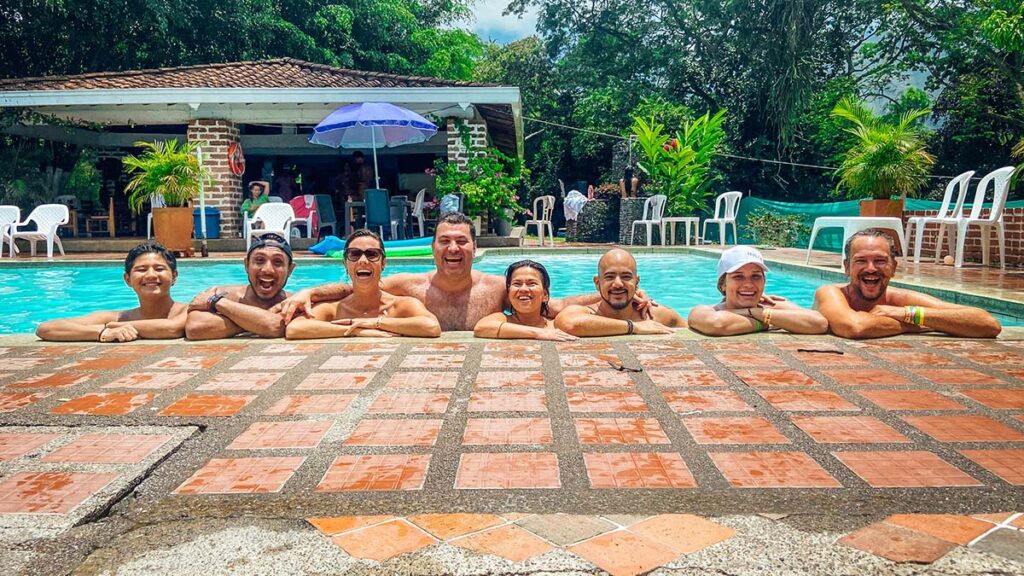 How Latin American Naturism is different

The naturist movement we’re seeing today in Latin America probably looks a lot like how it happened in Europe in the late sixties, and early seventies. At least, that’s what we think, we obviously can’t speak from experience. But the times are different. They are having their revolution in an era of the internet and social media. And they are very well aware of this.
Many European and North American clubs fail to attract younger members and a very important reason for this is because they don’t use the communication channels that the young people use. They still print magazines and write newsletters, instead of engaging in WhatsApp groups and Instagram pages. The latter is exactly what Latin American clubs do.
Because the boards of the clubs are filled with young people, the activities are also oriented towards this age group. This is something we’ve been saying to “western” naturist clubs over and over again. If they want to attract younger members, they need to start with attracting younger board members. What we’ve seen during the ELAN congress proves that we are right about this. 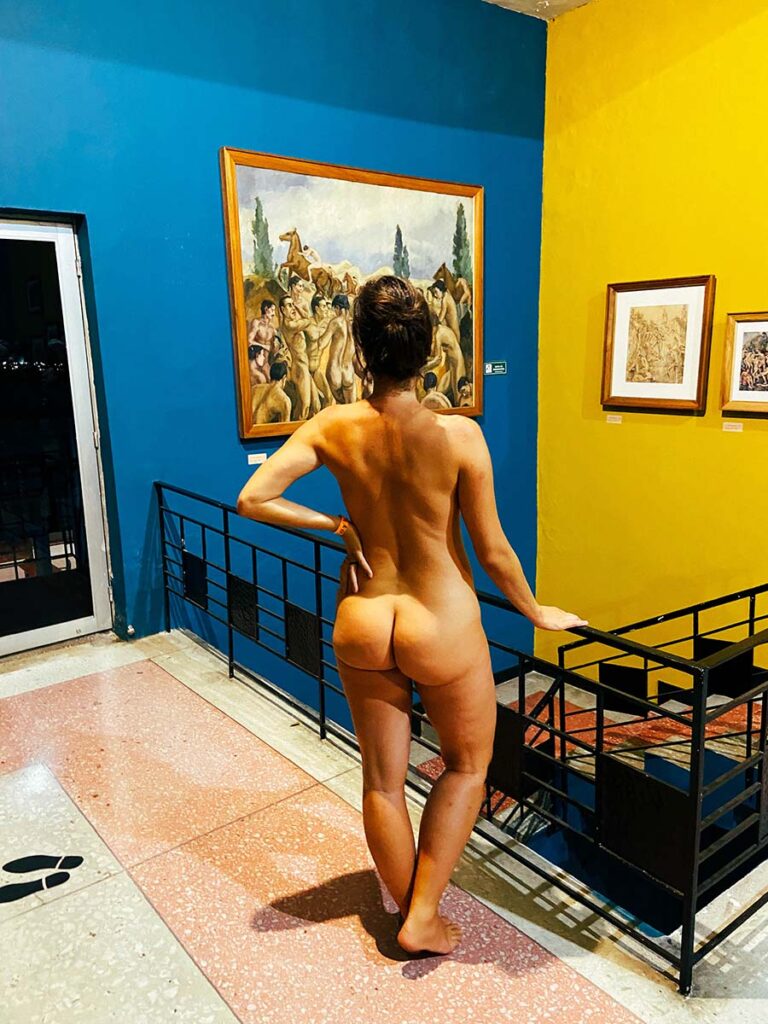 The (lack of) naturist baggage

When we arrived at the congress, a group of naked strangers welcomed us with big smiles and open arms. People from Latin America are huggers, and that doesn’t change when there are no clothes. We had given naked hugs before, but only to people we already knew. At first, it felt awkward to receive a hug from a naked stranger, but we quickly realized that this has to do with our mentality, and not theirs.
During the congress, we would participate in other activities of which we’re pretty sure that they might be frowned upon in other parts of the world. We have decades behind us in which we have been told that whatever we do as a naturist, it may never seem sexual to the outside world. We have been told to maintain a certain angle between our legs and to not touch others except for a handshake and maybe a pat on the back.
Naturists in Latin America don’t have this historical luggage, and they just integrate their warm culture into their naturist way of living. And they are right to do so. A hug is not sexual, even when there are no clothes separating one body from the other. Haven’t we, westerners, just become too careful over the years? 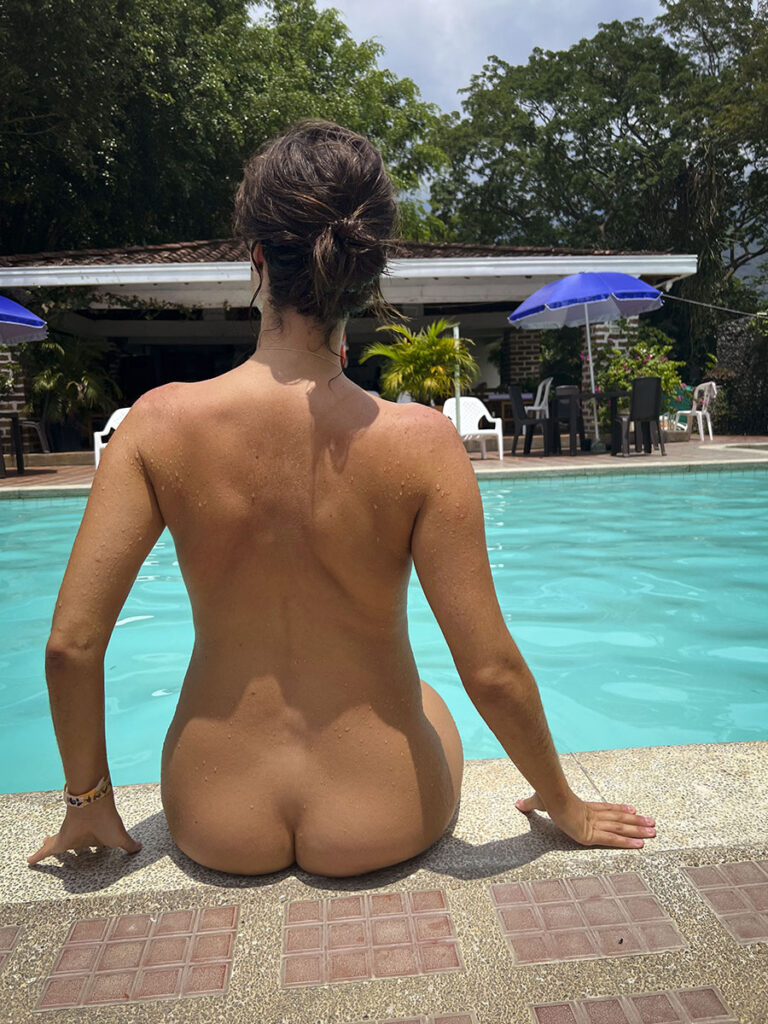 What we can learn from Latin American naturism

We definitely had a blast during the congress, that much is certain. Thanks to all the amazing people we met and the fun activities that were organized. And also from our blogger perspective, in which we constantly search for answers about how naturism can be improved. Therefore it was interesting to see how in a part of the world where nudity is definitely not as socially accepted as in Europe, where gender equality is still far from perfect, and where new movements are not often easily embraced, a modern kind of naturism is growing steadily.
To us, it feels like the way how naturism is practiced in Latin America today is a step that still has to happen in parts of the world where naturism has existed for more than 100 years. And it’s not stopping there, for a young movement, it’s much easier to take big leaps forward. This makes us wonder, might Latin America become the new trendsetter in naturism? Or will they slowly move towards traditional naturism? Or maybe something in between? We will definitely keep an eye on this part of the world because we can’t wait to see what’s coming next!

5 thoughts on “What can we learn from Latin American nudists?”