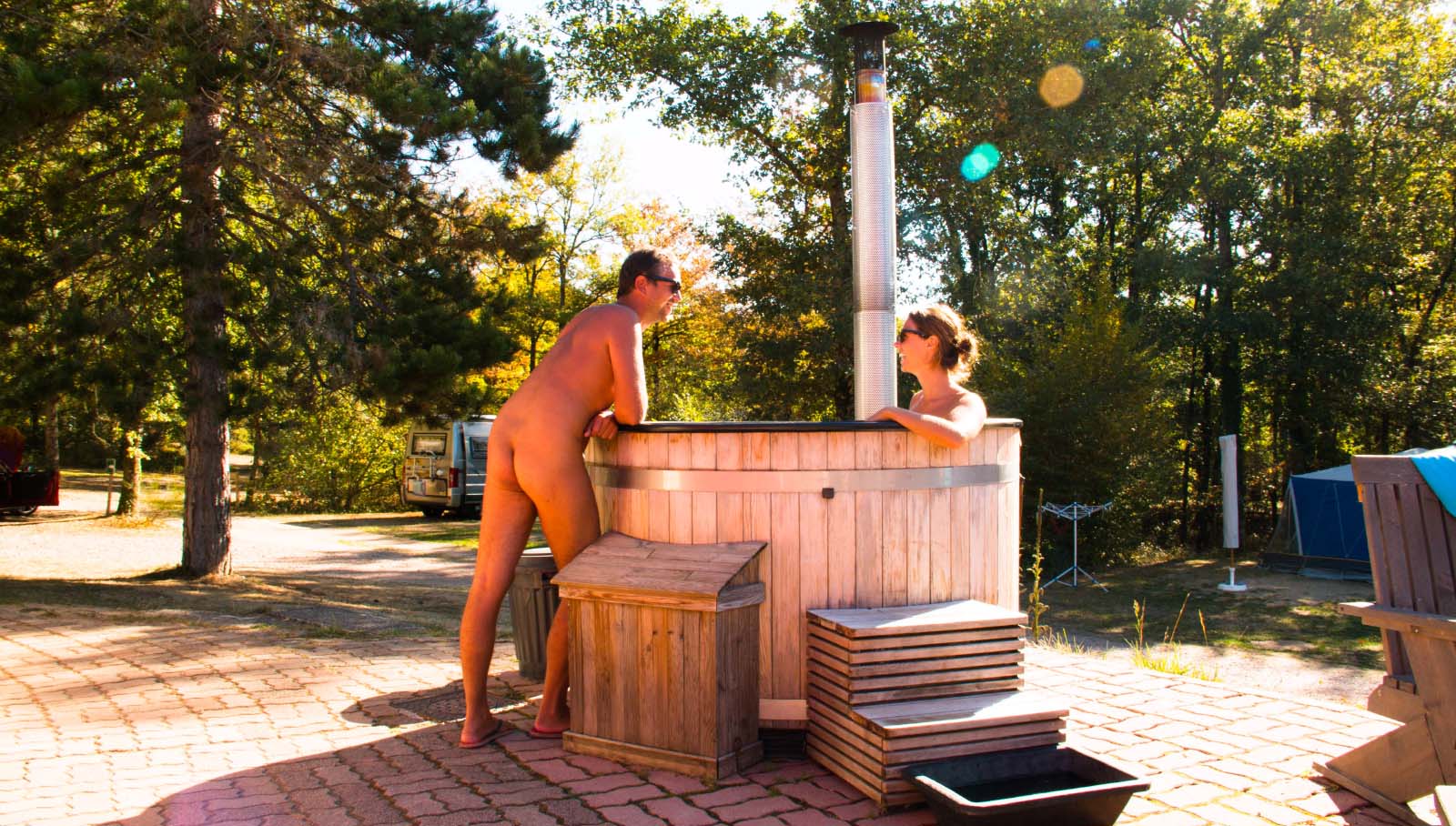 Normally, whenever a very exciting part of our trip is coming up, we like to make a big thing out of it. That’s how we introduced our big trip to the USA, meanwhile more than two years ago. And also the grand European part of our journey last year. Today, we’re at the start of (what we definitely believe) is going to be again a marvelous chapter of our Naked Wanderings journey. Something we would normally have told you about months ago. But it’s quite likely that this will be the first time that you hear about our Nude Tour de France.

Wandering (somewhat) naked around the world

To many of you, it may seem like we’re just aimlessly wandering around the world. At the very beginning of this journey, that was definitely true. We had no idea what we were doing. We just moved from one country to another, trying to find some naturist gems along the way. You can’t really blame us, we are from Western Europe. We are used that there’s a spot to get naked around every corner.
Until we ended up in Asia. A continent of which we had hoped that it would spoil us with naturist opportunities. We had visions of bathing nude in the river with plenty of friendly Sri Lankans, Malay, Indonesians, or Vietnamese. That didn’t particularly work out as expected. After a little more than a month, we had visited every naturist place in Thailand and the only one in Bali.
What we estimated as a nude Asian journey for at least 6 months, had to be cut short in a pretty drastic way. At least, if we wanted to continue to travel as nude as possible. We learned that we had to plan more carefully. Opportunities came and our journey continued. The world appeared to be very connected. A plane ticket, a couple of movies, and a nap brought us to new continents, with new naturist experiences.

How to get to Europe (on time)

Until international traveling came to an end. It’s a day that we will probably remember for the rest of our lives. We were in a small town in Cuba, trying to figure out how to get to the nude beaches when the Cuban prime minister announced that they were going to close the borders. We had about 48 hours to get back to Havana and off the island if we didn’t want to get stuck for months.
Getting stuck in Cuba wasn’t particularly on our “to-do”-list. But getting stuck in Mexico didn’t really sound like such a bad idea. Especially in our beloved Zipolite. The original plan to check out the nude beaches of Cuba, then visit some amazing clothing-optional resorts in Jamaica and having a quick visit to The Cypress Cove and Haulover Beach in Florida before heading over to Europe in early May, just vanished. Instead, we were back in Mexico, the country we had just left a week before. And we had no idea where to go next.
Honestly, we didn’t think that the quarantines would take that long. A couple of relaxed weeks on the nude beach of Zipolite and we would be on our way again. Easily getting back to Europe for the summer. But weeks became months. April became May and then came June. Just when we had gotten used to making decent planning, it wasn’t possible to plan anything anymore.

Why we are naked in France, once more

If there’s something we’ve learned as naturist travelers, it’s to never miss a European summer. After all, Europe is the continent with the most options for naturists and summer doesn’t last more than a couple of months over there. Half of June, we had to make a decision. If we wanted to keep wandering naked, we just had to find a way to get back to Europe. Some airlines still had planes in the air, so that wasn’t such a big problem. The main question was: What do we do when we get there?
We had done very little research and the original plan to cover many European countries wasn’t very doable anymore. On top of that came the risk of getting stuck somewhere. The borders are open for the moment, but for how long? What if we covered the main naturist places in one country and then travel would become, once again, not more than a pleasant memory?
A couple of restless nights and long talks later, we came to the solution: France. The country that we lovingly call the “Queen of naturism”. Yes, it would be the third time on this journey that we would find ourselves in France. While we could be exploring unknown territory instead. But if sudden quarantines would turn up again, thanks to the many naturist resorts in France, we would be able to quickly plan a detour and still continue traveling without clothes.

Maybe you’re familiar with the cycling contest “Tour the France”. As the name suggests, the cyclists ride around France, in many different stages, covering the most impressive places that the country has to offer. That was going to be our new plan. With the only difference that instead of cycling we would travel by rental car, we would stay in a tent instead of hotels and we would focus on naturist destinations.
It’s a plan that we came up with only weeks ago. All that we had learned about decently planning our trips had become unnecessary. We just didn’t have the time to plan it all. Just like at the beginning of our journey, improvisation and flexibility would be key. We’re going anywhere the French naturist wind takes us. Some places we missed last year appeared first on our new itinerary. And the rest we’ll figure out along the way.
Yet, we do think that this will be a very cool part of our trip and also that it has to be announced properly. So here we go: We have big news everyone! We are going to… wait for it… FRANCE!
Was that convincing enough?
We sure hope so, because it’s going to be an awesome couple of months. That much is sure. Back to the origins of naturism, sleeping in a tent and living nude.
Check out our itinerary regularly to see where we are going and make sure to connect on Instagram, Twitter, and Facebook for all the behind the scenes material. And of course, you’ll read lots about naturism in France on our blog!