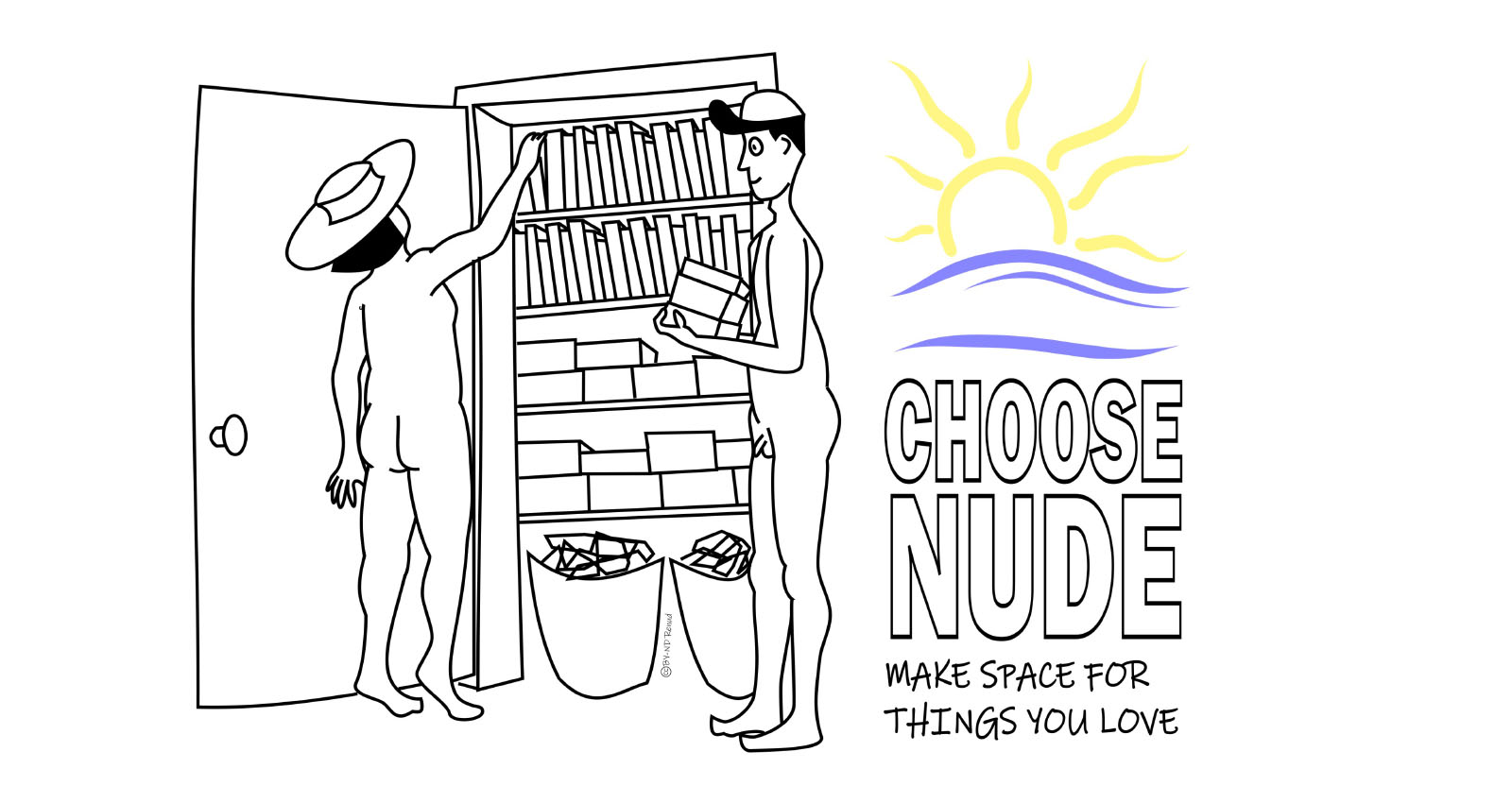 When we traveled through Greece, a couple of years ago, we met up with Ralf who owned a small naturist guesthouse near the coast. Ralf had moved there some years before from Germany with his family. For many Germans, nudity is about as natural as having a beer with a bratwurst. But the Greek culture is more conservative and Ralf adjusted to his surroundings. The beach down the road had a small secluded part behind a rock, and as naturists living under the Mediterranean sun, this was the perfect spot for the family to go nude sunbathing and skinny dipping without disturbing anyone else.
When a local fisherman spotted the family one day and undressed as well, Ralf had an idea. Why not make this small stretch of warm sand a nude beach? He gathered some wood, made one of those typical signs with a crossed-out bikini, and put it in front of the large rock. A new nude beach was born. Until about a week later, when the sign was gone. Ralf didn’t just give up like that and the next day he painted the crossed-out bikini sign on the rock. But once again, not many days later somebody had sprayed graffiti over it. 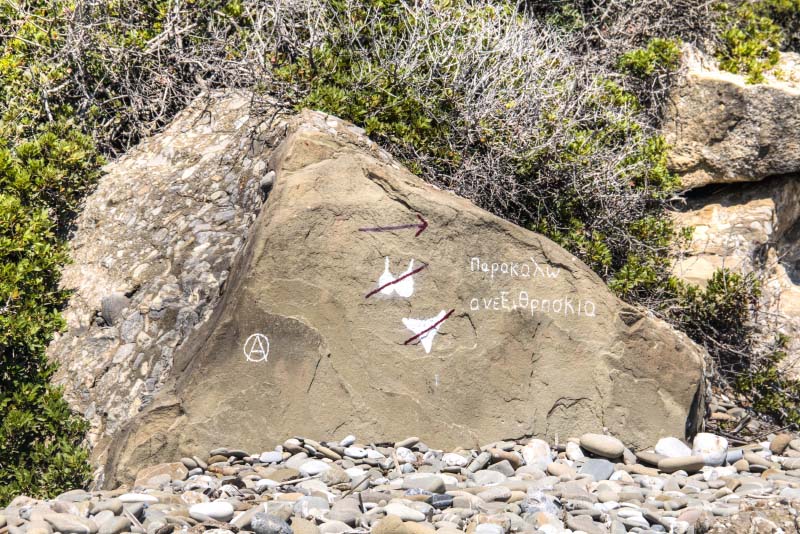 How to indicate an unofficial nude beach?

Apparently, someone in town was not all too happy with this new nude beach. Even though it was only an insignificant part at the far end. The family had already been sunbathing nude at that beach for quite some time and nobody had ever complained, so it’s not that a sudden riot could be expected if more naked people would join. But they obviously needed a more gentle indication.
We started talking. What could be a good symbol to indicate a nude beach, or any clothes-free place, without it being too much in the faces of the non-naturists? Which symbol would tell “insiders” that it’s ok to get naked here, without setting off the alarms of the “outsiders”? Is there, in fact, an international naturist symbol?
The INF-FNI logo came to mind. They are, in the end, the International Naturist Federation. But since their visions are often a bit questionable, we quickly let that idea go. Most of all, we wanted something inclusive. Unlike the crossed-out bikini which basically tells you that something is not allowed. We wanted a symbol like the rainbow flag for the LGBTQ community or the Om sign for those who are into meditation and spirituality. 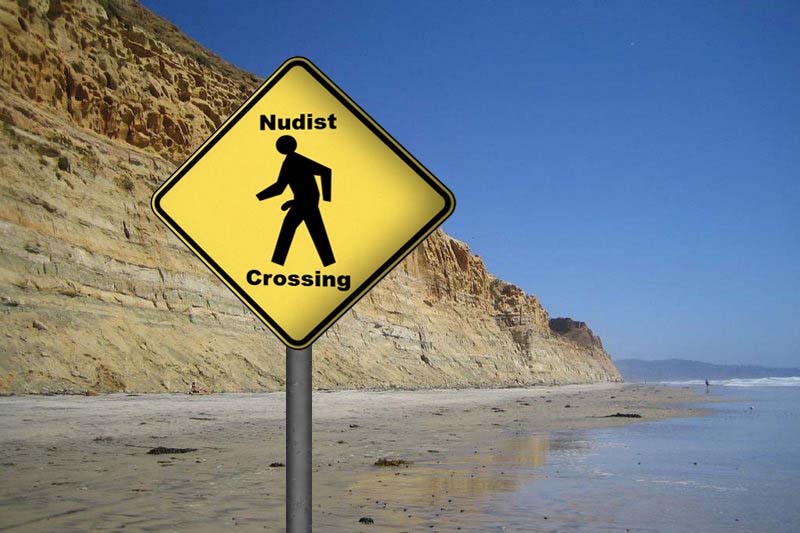 We never came up with a qualifying symbol with Ralf and both went our own way. Yet the idea had nested somewhere in the back of our heads. Fast forward to August 2020. Suddenly people on Twitter started talking about a new naturist symbol. Or at least a poll that was going on about it. While we hadn’t been able to come up with one symbol for naturism, Björ, interestingly also German, had made a list of about 25 possible symbols.
We were asked to pick our favorite. A second and third selection round would determine what could become the new naturist symbol. During the voting process, we kept Ralf’s little nude beach in mind. Which symbol should he paint? First of all, he needs to be able to paint it, not being a graphic designer nor an artist. So it had to be something simple. It also shouldn’t include nude bodies to avoid destruction. Our last qualifier was that it shouldn’t represent a butt because that’s just cheesy. We can’t remember which one we eventually picked, but it must have been pretty close to the symbol that finally got elected. 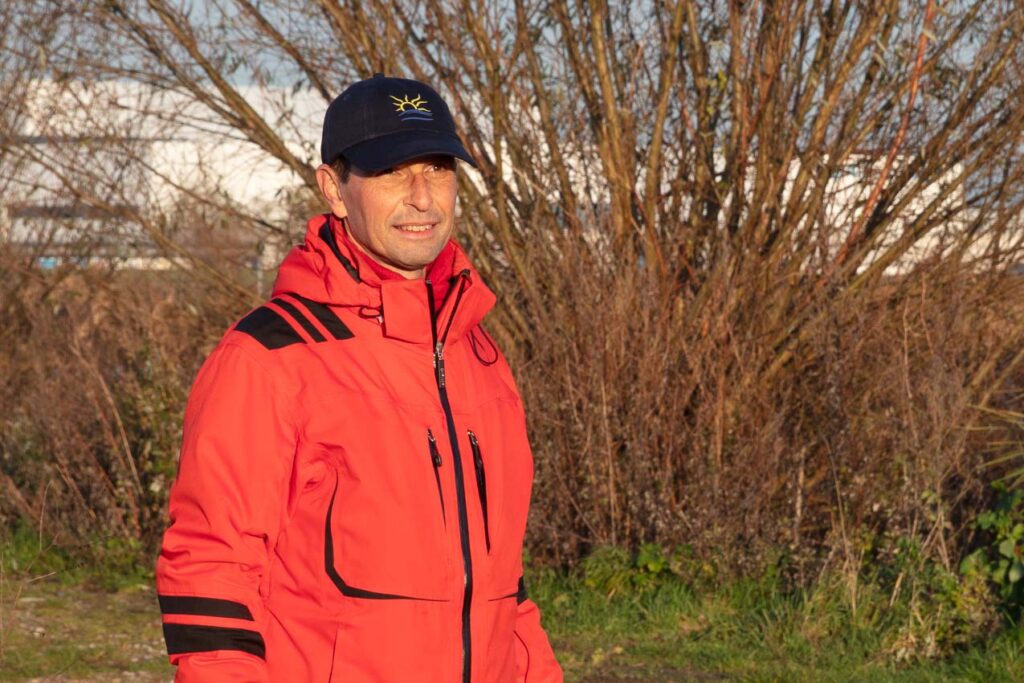 It’s not about how it looks

Honestly, we have to admit that we didn’t imagine the symbol to fly high. Not that we don’t like the idea, it’s just that social media tends to be way too volatile for things like this to actually stick. You can imagine our surprise when we saw the symbol coming back onto our screens over and over again. It became people’s avatar, it became a hashtag, it even became a tattoo. It became obvious that the symbol is here to stay, at least for a while to come.
Popularity always comes with a dark side, and soon we stumbled upon a Tweet with the question “What do you think about the naturist symbol?”. Nothing wrong with the question itself, but we were quite disappointed with the answers. Pretty much everyone talked about the design. Some praised it, many thought it looked old fashioned, boring, ridiculous. People seemed to completely miss what it represents. In the end, how much does it matter what the symbol looks like? It’s all about recognition. A three-year-old could have designed the peace symbol. The symbol for love is named after an organ and doesn’t look anything like it at all. 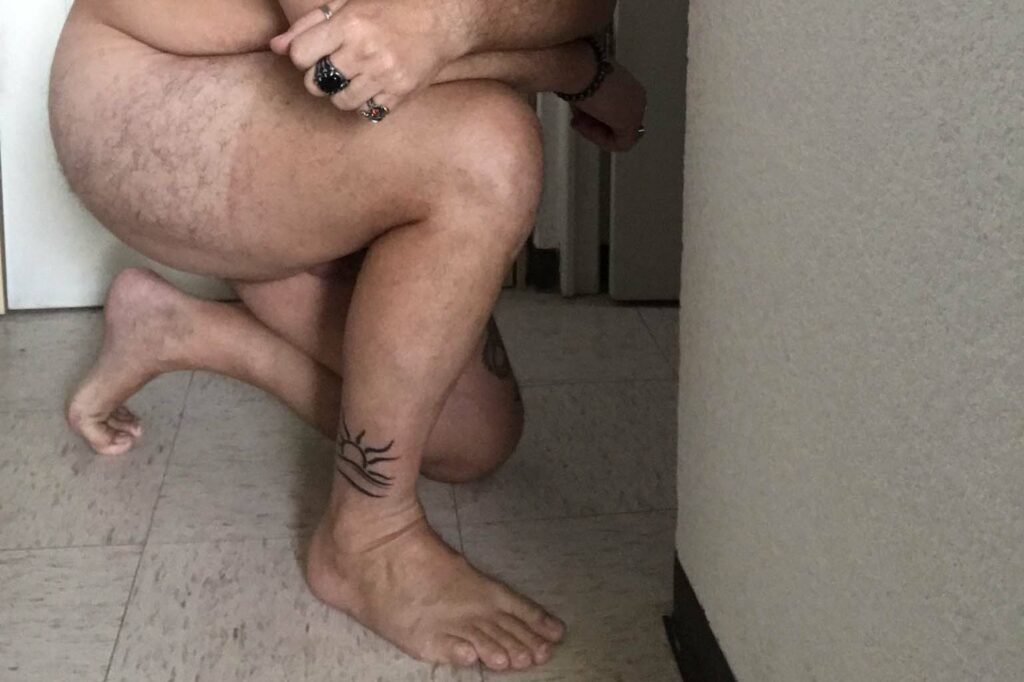 Embrace the naturist symbol or not?

One thing we don’t like about the naturist symbol is its name. The first thing we wondered was: What with nudists? What with all those people who don’t like to call themselves naturists or nudists, but just enjoy social nudity? What if Gilbert Baker, the gay man who first started using the rainbow flag, had introduced this symbol as the “gay men’s flag”?
But things evolve and if the naturist symbol keeps standing strong, we’re pretty sure that it will represent more than just naturism. More than just those who call themselves naturists. What’s most important, is that unlike those who criticize the symbol on social media (or on their Naked Wanderings blog), Björ, Erik, and who else is behind this, actually did something. They took matters into their own hands and created something with the goal to improve naturism. That alone deserves praise, support, and respect.
And we do hope that it sticks because it’s a way for naturists to recognize each other. It’s a way for places to announce that they are nude friendly. It’s a way to promote our way of living without being all in your face. And we’re sure that if Ralf still lives in Greece, he will paint the symbol on his rock. If he hasn’t already.
Read more about the Naturist Symbol on https://www.naturistsymbol.org
PICTURE CREDIT: Some of the images in this blog post are not ours and we’re very grateful to the creators for letting us use them. None of the images should be reused without approval.

5 thoughts on “A Symbol for Social Nudity”