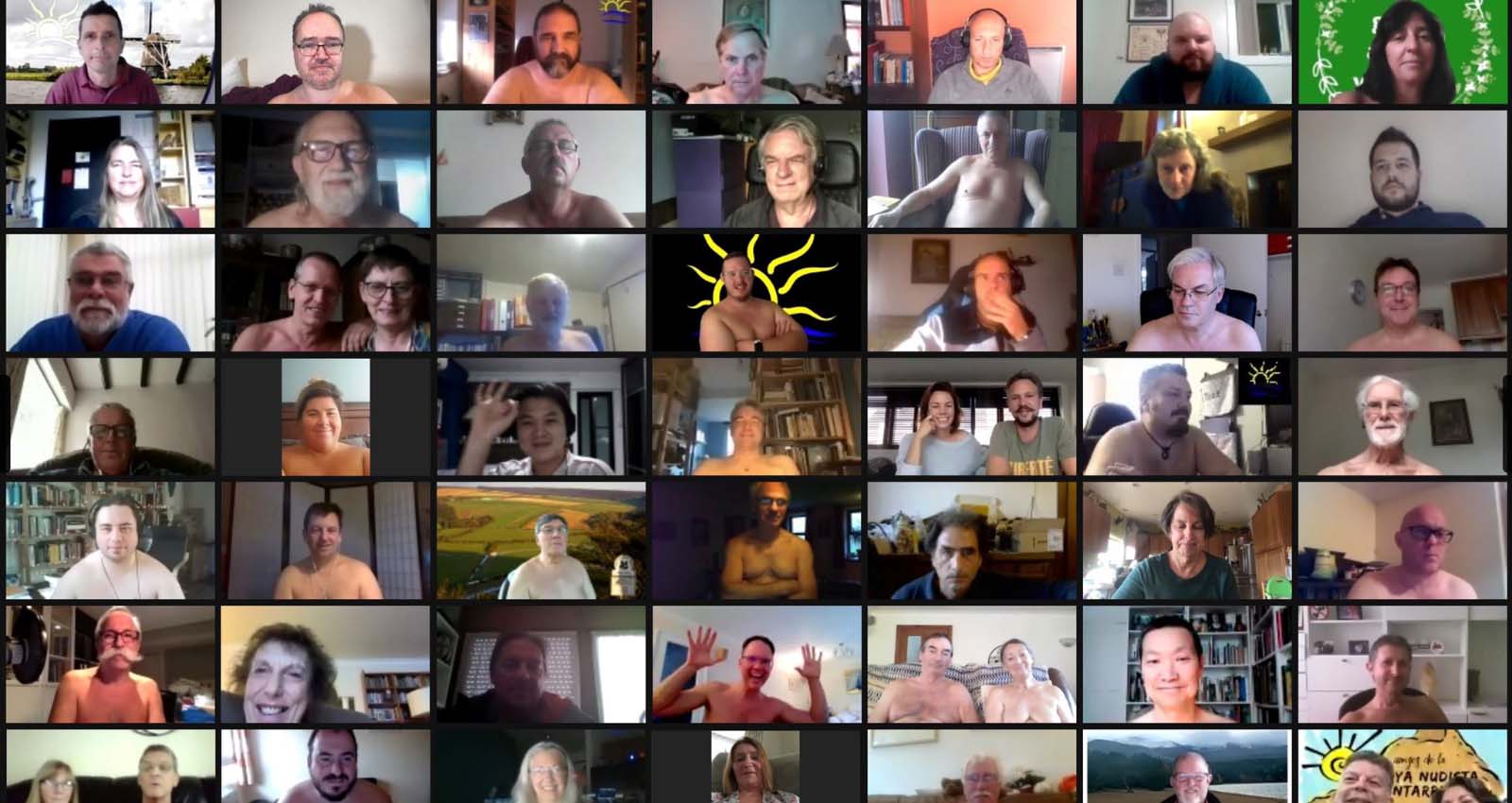 During the last several months, British Naturism has emerged as the pioneer of virtual naturist events. Online talks and workshops are organized on an almost daily basis during the covid pandemic and the cherry on the cake was their first Global Naturist Forum. Four sessions spread over two days, featuring naturist leaders and influencers from around the world.
With hundreds of participants during every session, it was definitely a success. It started off with the presidents of AANR and INF-FNI, the two largest international nudist/naturist federations, who shared their views about the current state of organized naturism and their visions for the near future. In the following sessions, individuals, naturist “influencers” and resort owners discussed the possibilities to grow and improve naturism. At the end, visionaries Stéphane Deschenes, Gregers Moller, and Edwin Kilby shared their ideas about a global and including future of naturism.

Who’s the naturist in the room?

During the first session, one of the panelists explained that there are two very distinct groups: naturists and so-called “nude bathers” (basically everyone who doesn’t comply with a certain set of requirements to be called a naturist). In her words: “These groups can live next to each other, but never together”.
Although we definitely disagree with this statement as a future vision, it was spot on if we look at where we are today. The online and offline discussions about the difference between nudism and naturism are endless. The USA actually has two different federations: one for naturists (The Naturist Society) and one for nude recreation (American Association for Nude Recreation). And lots of the people we met along the way who enjoy social nudity don’t want to be called naturists or nudists.
While everyone in the naked world shares the same ideas and values, the organization of it is scattered. In a movement where everyone is supposed to be seen as equals, some consider themselves better naked people than others.

How the naked world fell apart

Subgroups appear when people feel excluded. Back in the early days of naturism, the lifestyle was very restricted. You had to comply with a set of rules, values, and norms or you were not welcome at the naturist clubs. Pretty soon, people who also enjoyed non-sexual social nudity but didn’t really agree with the other requirements to be called a naturist, flocked together and became nudists.
What was already a minority, split up into two even smaller minorities. And then an interesting shift of mindset appeared in the western world. In the days when naturism/nudism/nude bathing/… was still often illegal and very well hidden, practitioners felt a strong need to belong. A need for a label that said that they were not creeps, weirdos, or perverts. Today, especially among the younger generations, the need for a label is largely gone. Instead, labels often feel suffocating.

Social nudity for every body

During the second session of the Global Naturist Forum, we looked at the possibilities to bring the naked world back together and to make it more inclusive for distinct groups like LGBTQ, BAME, women, youth, etc. How to unite such a diverse group of people who each has their likes, dislikes, preferences, and needs?
A key point was to embrace evolution. The whole world around us evolves, why should naturism remain the same as it was half a century ago? Not just in the sense of modernizing but also in embracing the different views, perspectives, and practices. Today, we often think in terms of “or”. We are a naturist or a nudist or a home nudist or a vacation nudist or a beach nudist or… What if we start thinking in terms of “and”? Can’t we be a naturist AND a nudist? A home nudist AND a vacation nudist?
Let’s face it, even the truest naturist doesn’t always get naked for the sake of connecting with nature. Sometimes she might just get naked for the comfort of not wearing clothes or to work on a tan. None of us is 100% one and 0% the other. The vacation nudist may also spend a lazy Sunday afternoon naked at home. The home nudist may also drop her clothes on a nude beach. If we would all admit that we’re a part of everything, we can start building on an inclusive future.

Global naturism (or whatever you want to call it)

During the last session of the Global Naturist Forum, we looked at how to implement this inclusive vision. The fact that the representative of the International Naturist Federation stated only a day earlier that this federation is meant to be for naturists and for naturists only didn’t particularly create a great foundation for improvement.
Additionally, social nudity is experienced in many different ways around the world. While we were discussing how to attract more young people, the president of the Thai federation mentioned that they have many young members and actually struggle to attract some elder ones. When the topic of gender imbalance came up, the Slovenian federation told us that 60% of their members are female.
This makes it obvious that strategies for including as many people as possible should be taken on a local level. On the level of national federations or even on the club level. Which brings us to the next question: Is there actually any use for an international federation?
The answer was yes. But not in the way that it’s organized today. The purpose of an international federation should not be to create rules and regulations. It shouldn’t tell national federations or associations which direction to follow and which tasks to execute. Instead, it should lead by example and vision and support the local organizations in their process to build a more nude-friendly world.
NOTE: This blog post is a mix of what’s been discussed during the Global Naturist Forum and our personal opinions.
PICTURE CREDIT: The images in this blog post are the property of British Naturism and should not be re-used without permission.