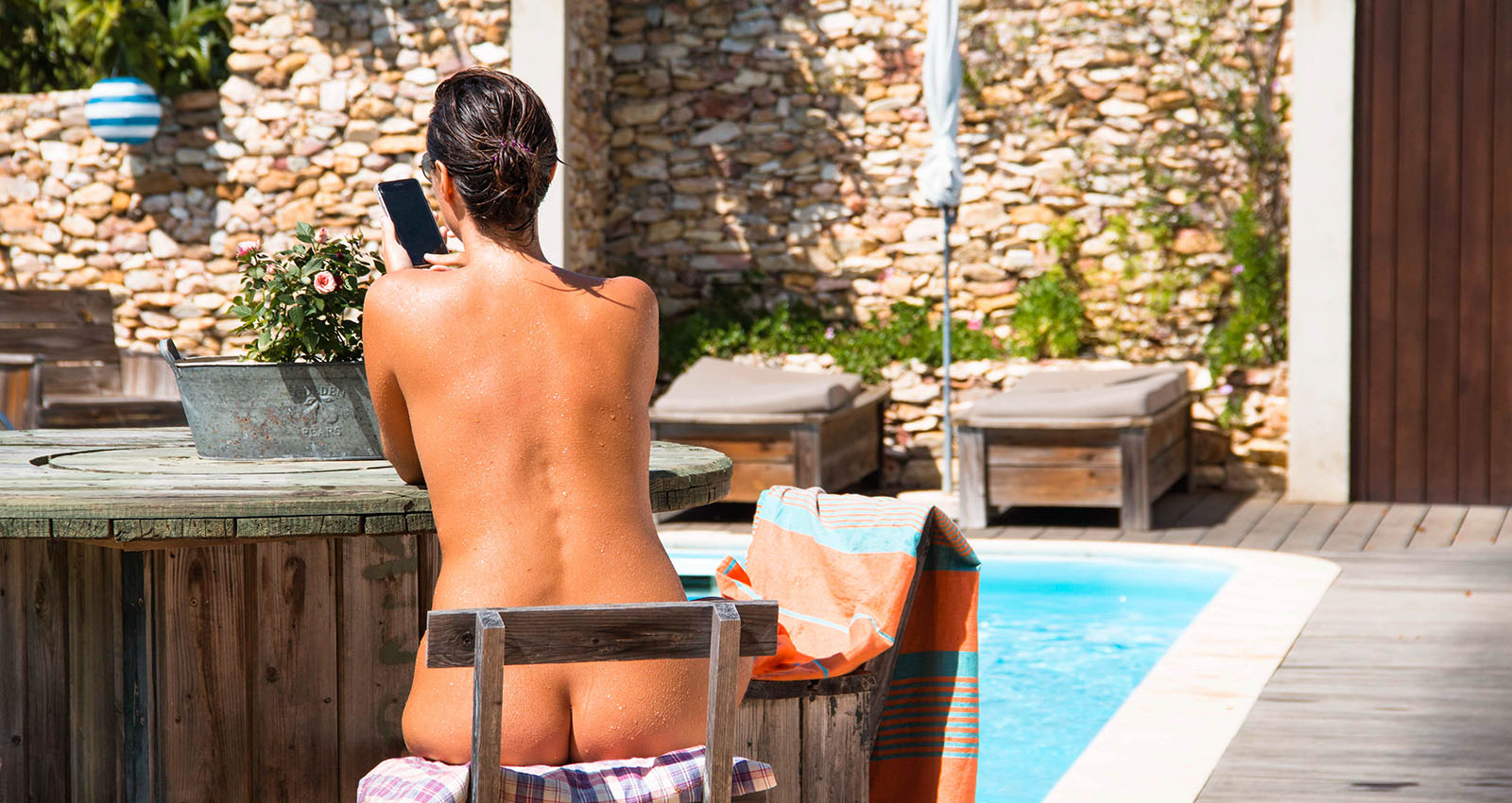 The other day we were invited by a friend to visit their naturist camp. Not the kind of campsite that we’re used to in Europe, that’s open throughout the season and where people come and go. It was more like a pop-up camp. A group of naturists rented out a whole, usually textile, campsite just north of Cape Town and turned it naturist throughout the weekend.
This is not uncommon in South Africa, last month we been to a “takeover” of a hotel in the Drakensberg mountains and just last week we talked to the owners of a textile guesthouse who told us that they would happily have naturists over if they rented out the whole place. As they only had 5 rooms, just a small group of naturists could do the trick. For some groups, a place like that would actually be too small. Like the group of naked campers who were with at least 30-40 people when we showed up.

It was a lovely sunny afternoon when we arrived at the camp and most people were in or around the swimming pool. Our friend greeted us and quickly introduced us to everyone in our near surroundings. We sat down, opened a beer, took a piece of watermelon, and started talking. This was already the third camp they were organising and we were interested in learning from their experiences.
You see, we strongly believe that there’s a high demand for large and small naturist events, but organising those always seems like such a hassle to us. You have to find locations, caterers, and activities. You have to make subscription forms, do promo, and maybe build a website. The prices for entry, camping pitches, food, and drinks need to be calculated. When we just start thinking about all those things, our encouragement drops to a below-zero level. But it doesn’t have to be like that.
In this occasion, the cost to rent the campsite was just divided by the number of guests. Everyone pays their share. The guests also bring their own food and drinks. And their own skills, one of the guests happened to be a DJ, another one knew a thing or two about massage techniques, and thus the activities just appeared out of nowhere.

Given our experience with blogging and social media, we were specifically interested in the branding and promotion of this event. Was there a website? Were there any flyers? Banners? What was their branding strategy? How did they get their name out?
Our first shock came when we asked one of the organisers what the name of this event is. He answered: “Well, it doesn’t really have a name, naturist camp or something”. The group didn’t really have a real name either, nor a website. They had no promo material whatsoever and there were no social media posts about this event.
From a marketing point of view, this seems like the completely wrong way to organise something. But in fact, they were using the best marketing technique there is: Word of mouth. And even better, the modern version of it: WhatsApp.

Just like in many other countries, South African naturists struggle with the fact that naturist places are quite few given the size of the country and are often far between. It’s not unlikely that the nearest nude beach or naturist resort is a day’s drive away. Naturists can visit those places once or twice a year for a vacation, but for those who like to frequently enjoy social nudity it’s quite impossible, or too expensive, or too exhausting.
What happens is that some naturists in the same area start organising their own small events. Maybe a pool party at someone’s home, or a braai (barbecue), or a game afternoon. A WhatsApp group is created to share the details about the event and the ball starts rolling. When the event is finished, the group remains active because it’s the perfect way to start talking about the next gathering. Maybe someone brought a friend who’s being added to the group along the way. Someone else met some cool local naturists during a recent vacation and adds them to the group.
This concept started pretty much simultaneously throughout the whole country, members from different groups get to know each other at a resort and add one another to their WhatsApp groups. Before you know it, a weekend camp can be organised for several tens of people. The only promo happens through the WhatsApp groups and since these groups have grown organically with friends of friends of friends, these events are only on a need-to-know basis. Which is an excellent way to filter out people with the wrong intentions.

We’ve seen similar WhatsApp networks before in Latin America, which even go cross-border. If you’re from Peru and want to meet some naturists during a vacation in Colombia, you just drop your travel plans in the general Latin America group. Then someone local can invite you to the group of Medellin, Cartagena, Bogotá, or wherever you want to go in Colombia, and you start receiving updates about all that will be happening.
When we think about it, this whole concept is not that different from how naturist clubs came into existence back in the day in Europe. A group of local naturists put some money together to buy or rent a place to have their weekly meetups. Having their own place was a necessity because it would have been totally impossible to find new places every week and communicate about them with all the members. The internet has changed this. Thanks to Google, it’s easy to find venues and book them, and thanks to online communication tools (like WhatsApp, Telegram, etc), you can let everyone know within the blink of an eye.
We wondered if these groups can eventually replace actual clubs, associations, and maybe even federations. No more membership cards, no more monthly newsletters, and no more agendas on websites that never get totally up to date. Just a number of WhatsApp groups on your phone that give you all the info you need. It seems like the perfect system, but it has a huge flaw.

What with the newbie?

This whole concept is based on an existing network of naturists. Friends of friends of friends. The reason why we’ve been invited to several really fun naturist events in South Africa during the last months is purely that we are very well connected in the naturist world. If the average Joe and Jane would travel to South Africa (or even live in the country), they would probably never know about the existence of these groups.
Naturist associations and federations play a very important role in this. The other day, we were at Sandy Bay, the local nude beach of Cape Town, with the Western Cape Naturist Association. They had a box of lip balm sticks with the association’s logo and handed those out to other people on the beach. For many, this was the first time they heard about the association. If they decide to become members, they will become part of the network. They will meet new people, who can introduce them to other people. They will be added to WhatsApp groups and be able to join events.

The future of organised naturism

In the early days of Naked Wanderings, we were among the strongest critics of naturist organisations. We thought that they were useless. We didn’t care for membership cards, we just arrived at naturist resorts, paid, and picked our campsite pitch. If a certain resort would refuse us for not being a member of a federation (which never happened), we would just have gone to the next resort. This is the European way, but only by travelling to other places around the world, we started realising the importance of organised naturism as a way to bring people into the network.
We’ve seen success stories and stories of failure when it comes to naturist organisations. They are often blamed for apparently doing nothing, but sometimes it feels to us like they are trying to do too much. If you rely on just a handful of volunteers, you can’t organise events, and create promo campaigns, and control memberships, and talk to the media, and…and…and… The work becomes too much, the expectations become too high, and in the end, everyone is disappointed.
If you’ve followed this blog for a while, you probably know that we like to guess what the future will bring. We believe in a naturist ecosystem where everyone has a specific task. There are the resorts that provide fun and safe places, there are groups that organise local events, other groups that take care of the nude beaches, bloggers and vloggers to promote naturism, and federations and associations that create the gateway into this whole network.