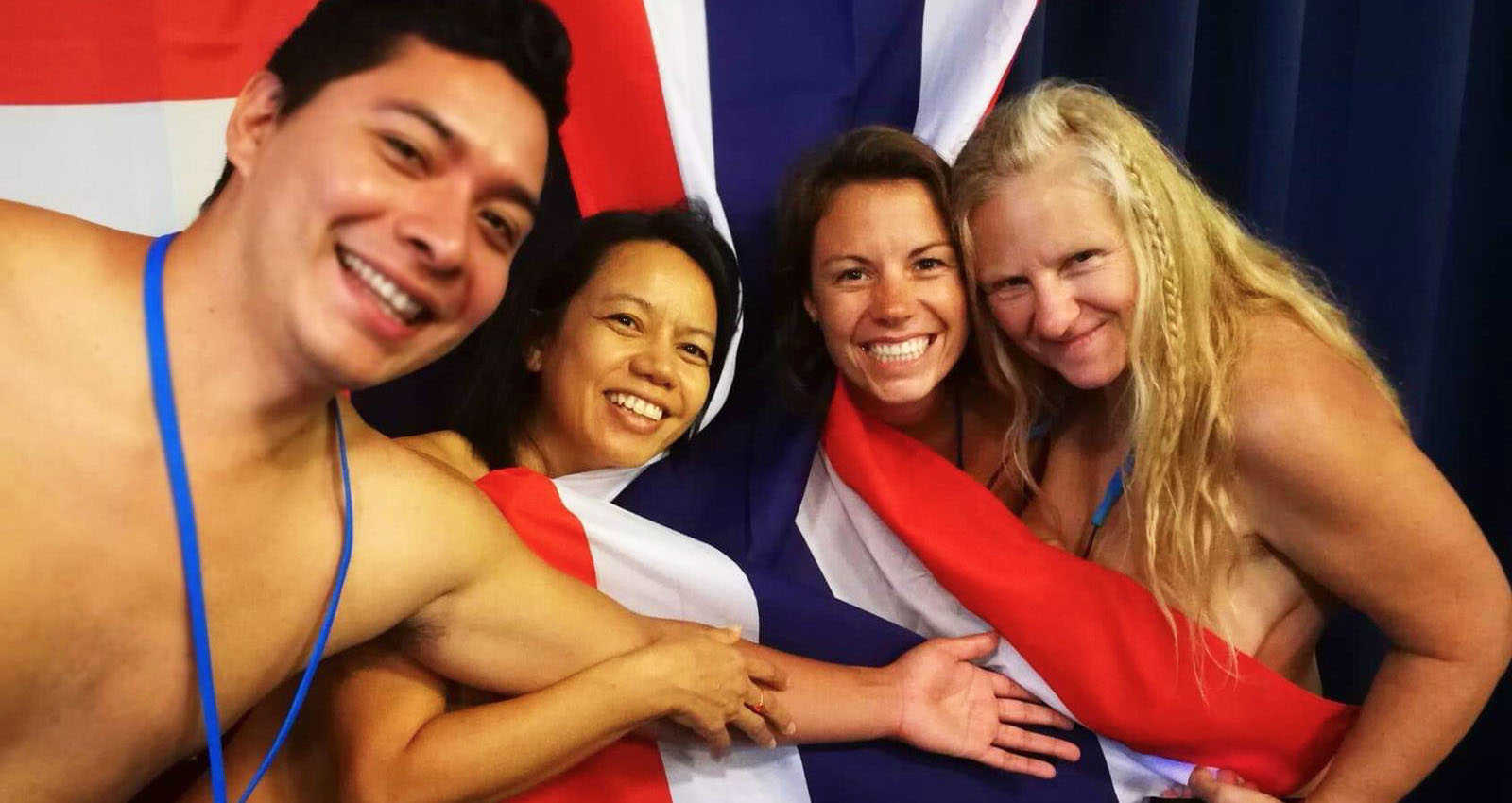 When we started with Naked Wanderings, we felt that there was a gap in the information about naturism that could be found online. There were static websites, often in need of an urgent makeover. You could subscribe to newsletters from clubs or federations. And there were not much more than a handful of naturist bloggers, whom we happily joined.
After more than 4 years of blogging on Naked Wanderings, we’ve seen many other naturist content creators come and go. Few managed to stick around for more than a while. One of the reasons is that being a naturist content creator takes a lot of time and effort for which the compensation is little to none. The friendly comments, the pats on the back, and the kind messages are heartwarming, don’t get us wrong, but they don’t pay the bills.

The internet has completely changed the way that we find information. We still remember the days when, if we wanted to learn more about a certain topic, we had to buy a book, a magazine, or at least a library subscription. When a 24-volume encyclopedia covered the bookshelves of many living rooms. Today, most of us have a small device in our pockets on which we can consult pretty much all of the world’s knowledge. For free, or so it seems.
But content is never free. In the past, we used to pay for information with dollars, euros, pesos, or rupees. Today, we pay by clicking on links, by looking at ads, and by giving small but very valuable pieces of personal information to the corporate world. Savvy content creators literally get rich while sleeping. Instagrammers with more than 100 000 followers charge up to $1000 USD for one sponsored post. Advertising companies regularly pay bloggers about $5 USD per 1000 page views. Similarly, YouTubers can earn about $5 USD per 1000 video views.
We’ll share some more numbers with you. Naked Wanderings gets between 250 000 and 350 000 monthly page views on average. The YouTube videos about naturism that Hector Martinez made, before his channel was banned, often got several millions of views. Yet, Hector nor ourselves ever made a single penny through mainstream advertising platforms. All because of nipples and butts.

We fall in a very unfortunate gray zone when it comes to earning money with naturist content. On one side, the advertising companies are terrified of every piece of bare skin. Staying away as far as possible from anything that has to do with nudity. On the other side, not a day goes by that we aren’t contacted by companies that sell porn or sex toys. Ready to put green bills on the table in exchange for promoting their products. But, of course, we rather stop blogging than advertise penis enlargers and fake vaginas.
Basically, the only way for naturist content creators to earn some income or at least offset their costs is via the traditional ways. By donations or paid subscriptions. But why would you pay for something that’s freely available? Without your donation, the Naturist Living Show will keep creating podcasts, Hector Martinez will keep making videos and we will keep writing blog posts. At least for a while to come. The thing is, unlike a book or magazine, you wouldn’t be paying for the content. You would be supporting what we stand for. Just like you probably wouldn’t join a naturist federation for its monthly newsletter or quarterly magazine. Instead, you support them for what they do for naturism.

There are different ways to support naturist content creators and all of us have our own preferred way. Patreon, a monthly donation platform, is becoming increasingly popular, but also the old fashioned donate button can still be frequently found. In many cases, you even get something in return. An alternative to the quarterly naturist magazine, so to say.

Hector was one of the first genuine naturist content creators to embrace Patreon. We said “genuine”, because just like there are many obscure naturist websites, there’s also a growing number of obscure Patreon accounts, promising uncensored and sexual content for your money. This kept many content creators (including ourselves) away from the platform at first, afraid that people would start questioning our trustworthiness. But Hector went for it and proved to the world that if you stick to your values, you can make it work on this platform.
➡️ Check out Hector’s Patreon

Stéphane Deschênes has been a naturist content creator from the very beginning. He started his Naturist Living Show podcast back in 2008, which happens to be the year that we took our first steps into naturism. It would take several years more before we would learn about the podcast though. Stéphane and his team have been publishing an episode a month ever since. But he’s a busy bee and when you do something for free, the resources are limited. Supporting the Naturist Living Show on Patreon would give them the chance to expand.
➡️ Check out the Naturist Living Show Patreon

We joined a Naked in Motion yoga class when we were in New York back in 2018. Willow, the founder, who we had wished to meet unfortunately wasn’t around because she was launching naked yoga in Boston as well. Meanwhile, also Seattle can now enjoy Naked in Motion classes. Naked in Motion is much more than just yoga without clothes. It’s about equality and body freedom. About learning to love your body and respect everyone else’s. Unfortunately, because of COVID, all live classes have been canceled and Willow is facing financial challenges. By supporting Naked in Motion on Patreon, you can help this project sustain.
➡️ Check out the Naked in Motion Patreon

Another strong promotor of body positivity through naked yoga is Sarah-Jane, aka The Naked Yogi. She helps people (re)connect with their bodies and to get rid of shame and negativity. Basically, if Sarah-Jane’s classes would be mandatory in high school, it’s likely that the world would look a lot better. By supporting The Naked Yogi, you can help her to create more content and help more people.
➡️ Check out The Naked Yogi Patreon

Many will agree that naturism is about a lot more than just being naked. It’s about liberation, about freedom, about confidence, about comfort, about friendship, and about many other blanks that you are free to fill with your own experiences. For Ben Brooksby, it’s about mental health. Ben has been suffering anxiety attacks since the age of 6 and with his Naked Farmer project, he wants to create more awareness of mental health issues and raise funds to support mental health professionals. You can support his projects via single donations.
➡️ Donate to The Naked Farmer

Just like ourselves, Brandan wasn’t all too happy about how naturism is often represented on the internet. With Get Naked Australia, he wants to completely reshape the naturist culture in his home country Australia and empower people to experience the benefits of naturism in its original setting; unspoiled nature. Within the first year, Get Naked Australia gained over 100 000 followers and people started sending in pictures of themselves, naked in Australian nature. Get Naked Australia doesn’t use the common donation tools, but you can support them by buying their quarterly magazine or some of their cool merchandising.
➡️ Buy Get Naked Australia Stuff

We met Liz and Blake a couple of years ago at nudist resort Olive Dell Ranch in southern California, where they live. At the time, they talked about doing more to promote naturism. It was an interesting conversation. They admired us because we had already taken the step to make our naturist lives public. We admired them because they thought about doing this when they were so much younger. Oh, how we wish that we had started Naked Wanderings a decade earlier… Anyway, not too much later, they launched the Our Naked Story Podcast. Showing the world the joys of nudism through the eyes of two early twenty-somethings.
➡️ Support the Our Naked Story Podcast

And of course, there is our very own Naked Wanderings. Our own platform with which we show the world the beauty and joy of naturism. We help people take the first steps into social nudity and help naturists and nudists find all the best places to get naked around the world. Naked Wanderings has grown so much over the years and if we’re not working on new projects, we’re definitely thinking about them. We believe in a bright future for naturism and naturists and with your support, we can do so much more than we already do today.
➡️ Check out the Naked Wanderings Patreon
There are definitely some more great naturist content creators that we missed in this list and many others yet to come. You can help us all survive and grow. And if we ever manage to make a difference, you will always know that it was partially thanks to you.