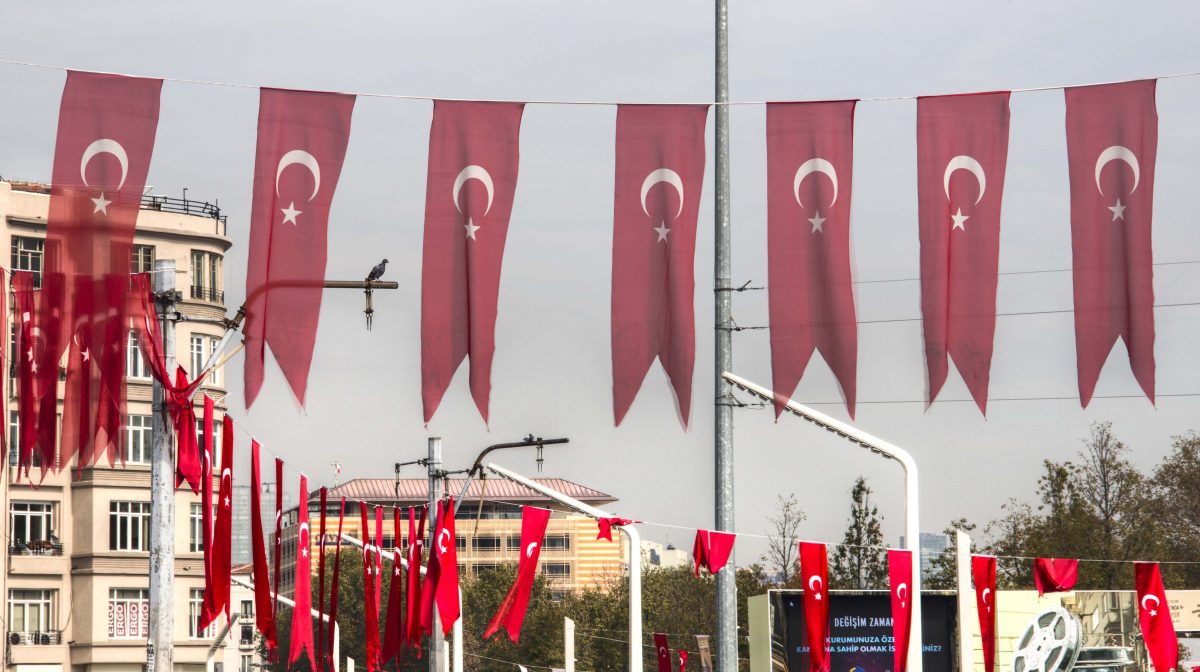 Our research for a flight to Sri Lanka that wouldn’t drown most of our monthly budget gave us Istanbul as the perfect place to fly from.
Istanbul.
Yes, we’ve followed the news recently, and especially the controls on internet censorship which the Turkish government is implementing worried us a little. Is nudism in Turkey even allowed? Will we be able to be nude outside of our hotel room?
What if they know about Naked Wanderings?
What if they know that WE are Naked Wanderings?
Not being allowed into the country was a risk we didn’t care so much about, being picked from the street, questioned, and possibly put in jail was a much bigger worry.
But badasses as we are we decided to give it a try. The flight was really a bargain and let’s face it, as long as we stick to the rules we still have the right to be nudists. Or nudist bloggers. Right?
The day before we were entering Turkey we noticed that our story got covered by a Turkish news site… Come on, what are the odds? So we have to admit that we were not 100% confident when we crossed the border and that we were quite relieved when nobody seemed to recognize us and the stamp was put in our passports.
We were in!
And while we were there anyway, we could as well try if we couldn’t get some nudie time…

We probably don’t have to tell you that the options for naturists in Turkey are more or less zero. Not only is it a Muslim country, but the current government also has a strong policy against public nudity, especially mixed gender.
This hasn’t always been the case, years ago when Western tourism started to get a foot on the ground in Turkey, the government had to be quite liberal about the prescriptions regarding clothing and especially bathing suits. They had to compete with Spain and the south of France, where topless sunbathing was a pretty normal thing to do those days, so they looked the other way when a woman decided to lose her top at the swimming pool of the resort and the staff was briefed (or threatened) not to stare, not to mention it and certainly not to touch.
It didn’t take long before nudists also found their way to the country and soon Patara beach and Butterfly Valley got recognized as unofficial nude beaches. And as it always goes, the local community started to give it a try themselves and more and more Turks embraced nudism.
This was not much appreciated by the government.
The opening of the first naturist resort in Turkey in 2010 was for them the perfect moment to make a stand. Within a week the place was closed down and the government announced that they would not embrace naturism. Ever.
Today, even though Turkey has become a very western country, public nudity is still a big no-no.
Other great activities in Turkey:
⭐ Cappadocia: Hot Air Balloon Flight
⭐ Istanbul: Dervishes Performance
⭐ Antalya City Tour and Duden Waterfalls 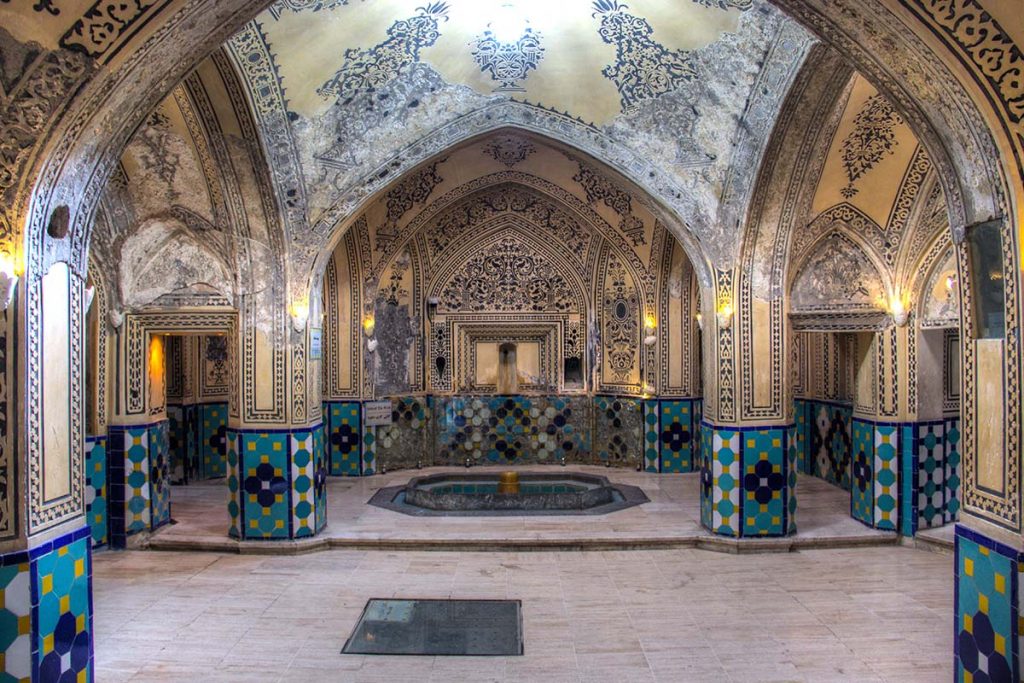 This decision might seem a bit surprising, given the fact that Turkey has a long history on social nudity (although gender-separated) in their hammams.
For those not familiar with the term, a hammam is a bathhouse, where people go to get washed. They exist from the days when there was no water supply to every house, so when your partner, your children, and your dog ran away from the smell of your feet, you went to the bathhouse.
For the poor, this was not much more than a cellar with a pipe leaking water, but for the more fortunate Turks, there were beautifully decorated places where one could spend the afternoon getting soaked, getting relaxed, and being washed (yes, if even you couldn’t stand the smell of your feet anymore, there was a guy who could wash them for you).
These bathhouses still exist and are on top of the to-do list of many tourists, not only will you be in a most beautiful environment, you have all kinds of wash and massage options. You’ll leave as a new, much cleaner person.
➡️ Click Here for the best hotel deals in Istanbul
➡️ Click Here for the best Airbnb rentals in Istanbul
Istanbul and many other cities around Turkey have bathhouses that almost exclusively cater to tourists. Before you enter, you’re given a towel to wrap around your waist so you won’t be completely naked, most visitors even shower with this towel, but few people will frown if you decide to leave it off.
This is the only legal way to get socially naked in Turkey. 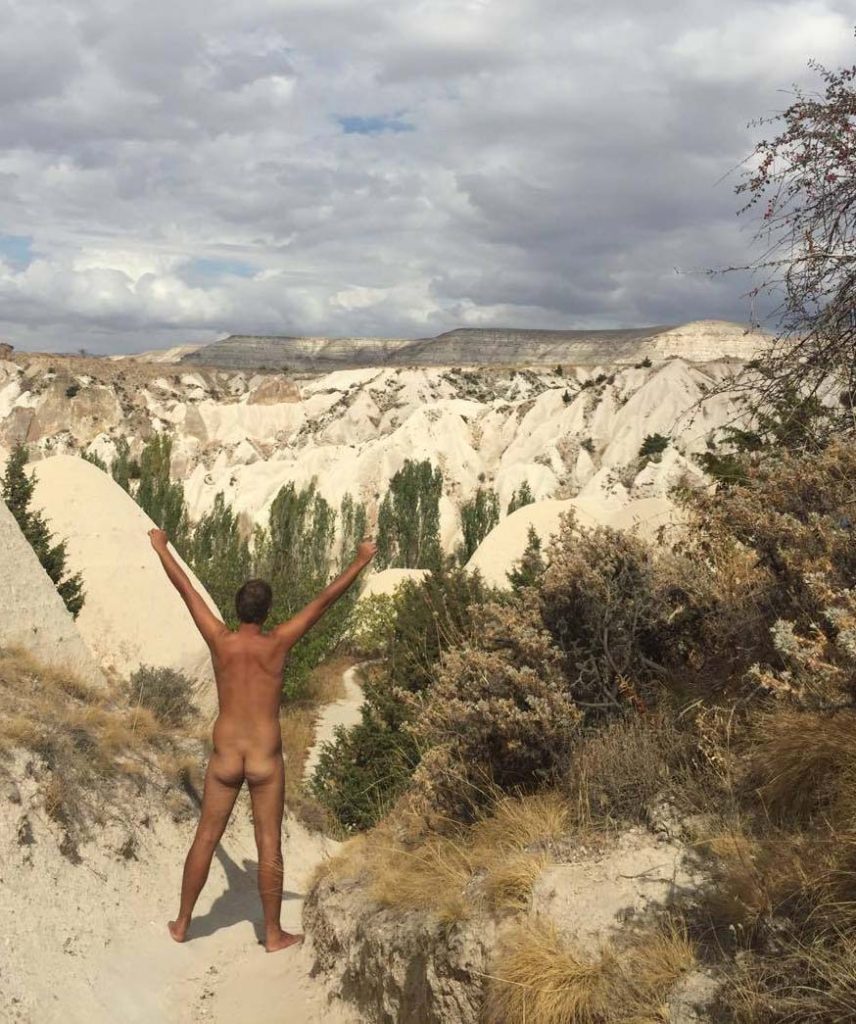 The not so legal way

But of course, Turkey is a big country and has a lot of nearly populated areas, so sometimes you just can’t resist. At least we couldn’t. Our hike through the red and rose valleys in Cappadocia was one of those occasions. Being in such a magnificent landscape with clearly nobody around was enough reason to bare it all. Well, at least for a short period because we were scared as hell of getting caught, but it was an amazing experience anyway.
➡️ Click Here for the best hotel deals at the Turkish Riviera
➡️ Click Here for the best Airbnb rentals at the Turkish Riviera
Turkey also has a very long coastline, which we couldn’t explore much due to a lack of time but which must certainly have some desolated beaches where pants could be dropped.
Just keep in mind that the government is very strict about this and that you can be put in jail. Other than that, especially in rural areas, the people might not appreciate your naked asses so please be careful if you decide to bare it all in Turkey!
➡️ Click Here for the best hotel deals in Cappadocia
➡️ Click Here for the best Airbnb rentals in Cappadocia
All in all, Turkey is an amazingly beautiful country which has lots to offer for tourists and which could offer much for nudists as well, if only it was allowed.
Think about naked hikes in Cappadocia, skinny-dips in the mineral lakes of Pamukkale, or naturist areas on Turkey’s magnificent beaches.
At the moment, it’s still a dream, let’s hope it becomes reality one day!

9 thoughts on “Getting naked in Turkey”