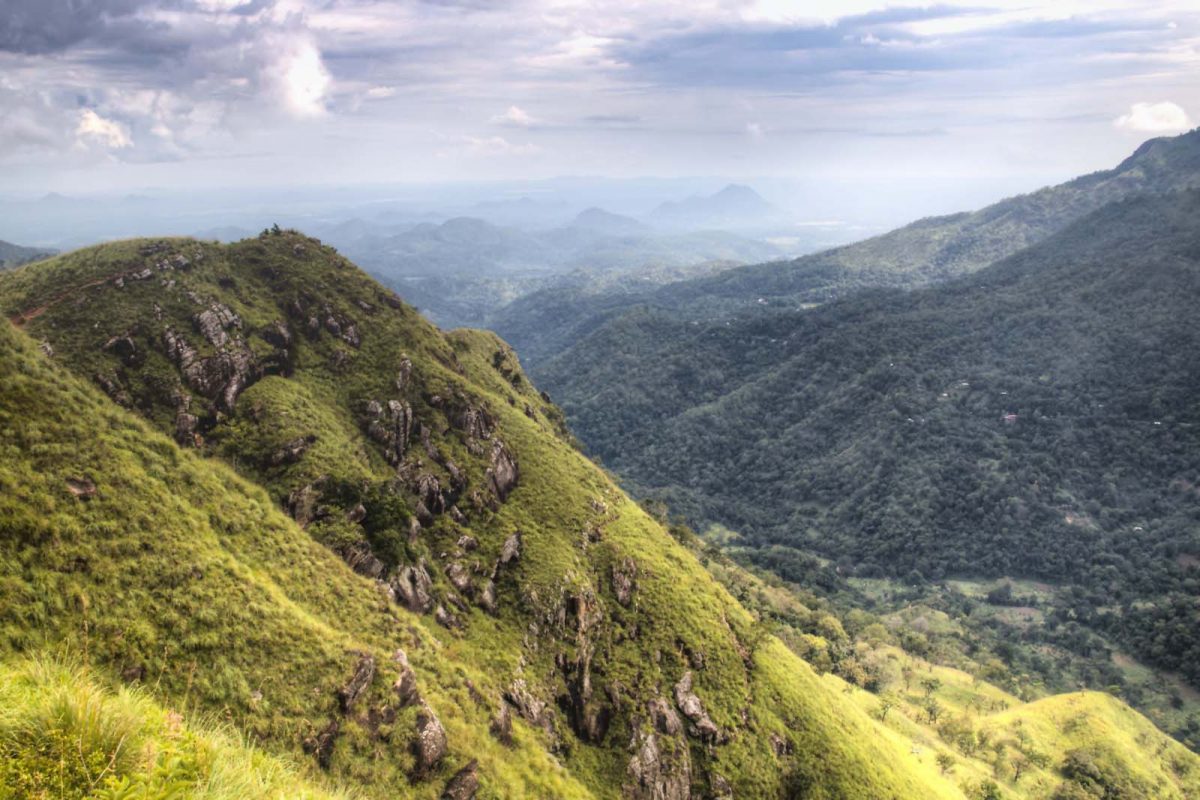 We used to do decent research before setting off to a new country, but once in a while, we let our expectations just lead us. Maybe we’ve gotten a bit lazy because of the length of our travels or maybe it was because getting naked in Europe was so easy. And let’s face it, what objections could the Sri Lankans have against our tanned behinds? They are such friendly people and they have the perfect weather for nudism, great temperatures all year round, lots of sunshine, and even when it rains one could perfectly enjoy some outdoor nudity. And their main religion is Buddhism, which happens to be a philosophy that is often adapted by nudists as well. But somehow we missed some pieces in our theory.
Long after we had booked our flight tickets to Colombo, we remembered that one of our first Naturist Talks interviews was with a guy from Sri Lanka. We really should’ve re-read this one earlier…
An in-depth Google search only confirmed the story of Madushan, these days naturism is completely not done in Sri Lanka. It’s against the law, there are no nude beaches, no nudist resorts, and no naturist federations. Our last hope was to find some underground nudist groups like there appear to be in India, but also that was hammered down. Nonexistent. These are going to be touch weeks when it comes to finding places to get some nudie time… But we knew from the beginning that Asia wasn’t going to be the easiest continent for our research, so we still carry hopes to find some nice deserted places.
The question we’re struggling with though is how this happened. Let’s get back in time
One of the first things our sleepy eyes noticed when we arrived in our guesthouse in Colombo at about 2 in the morning was an image of the Hindu Goddess Parvati. In these areas, Parvati is known as the wife of the God Shiva and the mother of Ganesha (the God with the elephant head), but what struck us most was that she was pictured with bare breasts.
Although we know from experience that art can be a tricky indicator, some of the most famous nude paintings in history were created in times when they put you in a madhouse if you dared to bare it all in public, it did give us a bit of hope.
So let’s dig a little deeper.
We don’t need to go all the way to the early beginnings, we’ve already talked about this topic some time ago in our own history on clothing. Shortly summarized: Some hunter got a bit cold, decided to use animal skin to cover up, apparently had a talent for fashion, and created the first fur coat. When we link back to Sri Lanka, it’s hard to imagine that the temperatures had anything to do with it. We can get chilly sometimes in the middle of the night, but in those days there was no airconditioning.
History taught us that without external factors like governmental pressure, the fashion industry, or religion, people seem to find it convenient to be naked when nature allows it. And so did the early Sri Lankans. 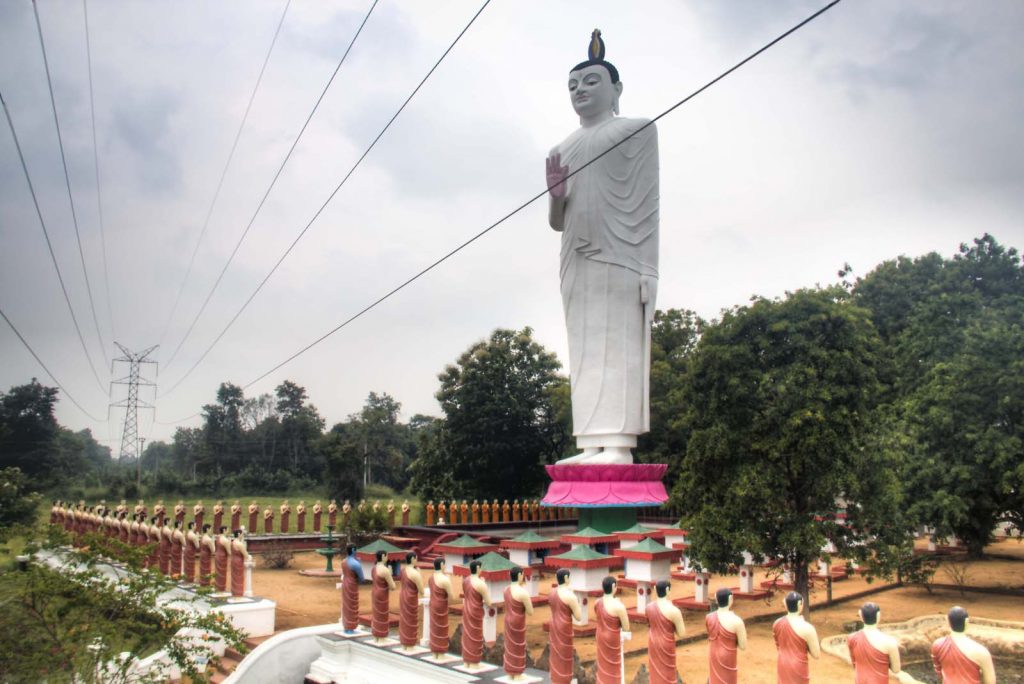 And then came the Buddha
We have always believed that Buddhism is a very accepting religion, one that allowed you to explore your inner self and to find out what works best for you. But our Google search told us another story.
Before his enlightenment, the Buddha was a follower of Jainism, a religion in which nudity was an important player.
The monk Mahàvira said:
“Nudity is useful for desiring little, for contentment, for expunging evil, for scrupulousness, for carefulness, for lessening obstructions and for arousing energy”.
Do we notice some similarities with nudism here?
Another of his ideas was: “I have nothing anywhere and, therefore, for me, there is no attachment to anything”. He and his followers practiced those principles by getting together twice a month and sleeping naked on the ground. An ancient nakation, so to say.
The Buddha didn’t like one little bit and said “Nakedness is unbecoming, unsuitable, improper, unworthy of an ascetic, not allowable and not to be done”. According to him, nudity won’t purify the soul and won’t get you in a better state of mind. Tell that to the woman who emailed us last week saying that nudism helped her a lot to cope with her stress… But in those days there maybe was no stress (and neither were there e-mails).
To be honest, we have our doubts if these were really the Buddha’s words and not something added afterward by some prudes, but if they were, he probably won’t be so happy seeing the rise of naked yoga these days. 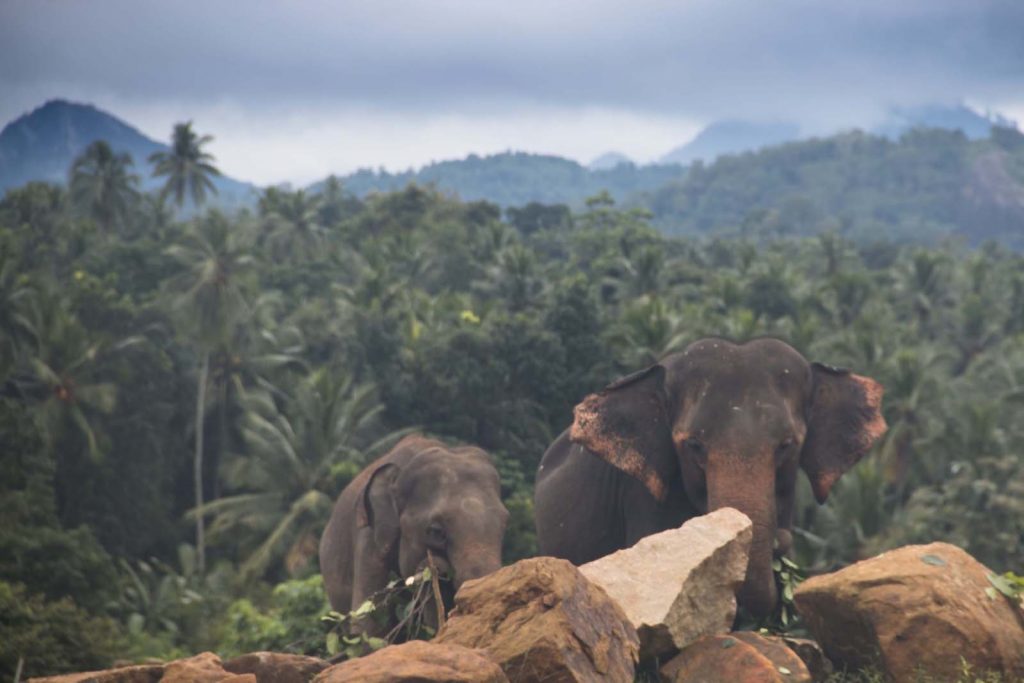 And then came the Europeans
Although the Buddha said that people were not supposed to be naked, many Sri Lankans considered this mostly something for monks and nuns and lived happily ever after with their naked asses tanning in the sun while they worked their lands.
But then some Portuguese boats appeared on the horizon, loaded with soldiers, weapons, foreign diseases, and Catholic missionaries who were determined to convert the local community to a religion which had condemned nudity ages ago. And then the Dutch came along who chased away the Catholics and left some Protestants (we have to mention though that except for Catholicism, freedom of religion was allowed during this period) and as the cherry on the pie came the British in the early nineteenth century.
The British were there to stay and they arrived right before what is known as the “black century for nudism in the UK”. You’ve guessed it, the Victorian era. The rules of one of history’s most prudish queens were implemented and a glimpse of skin was rarely to be seen again. 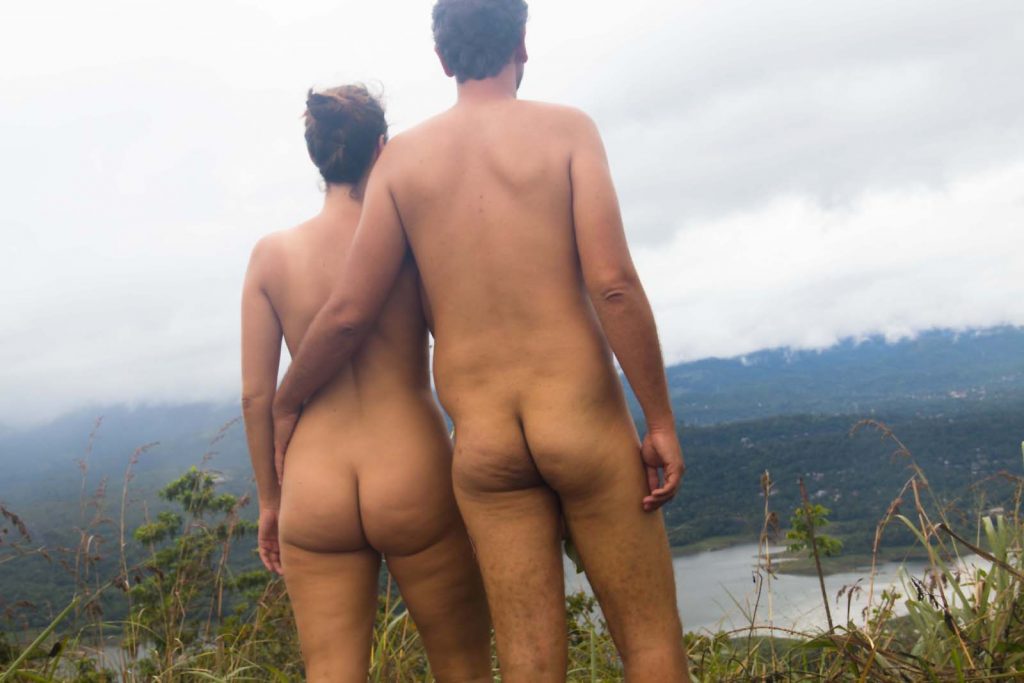 And then came Nick and Lins
The queen’s troops are long gone but the damage seems to be permanent. The combination of different religions and governmental influences has created an aversion towards nudity which will take a long time to reverse. Children at school are taught the sense of “lajjawa”, a combination of shyness, shame, modesty, and fear from a very young age, and any form of nudity in the media is either banned or sexualized.
When we look at the picture of the Goddess Parvati during our walks up and down the hallway, we wonder what she thinks of all this. She’s probably still devastated by the fact that some monks have scratched out every breast they could reach in the 5th-century wall paintings in Sigiriya about half a decade ago. But we resist believing that she gave up on her people.
So in her honor, and in the honor of nudism, and just because we like it so much, we will do our very best to let it all out here in Sri Lanka! Even though it will be a difficult mission.

15 thoughts on “A brief history of Sri Lankan nudity”