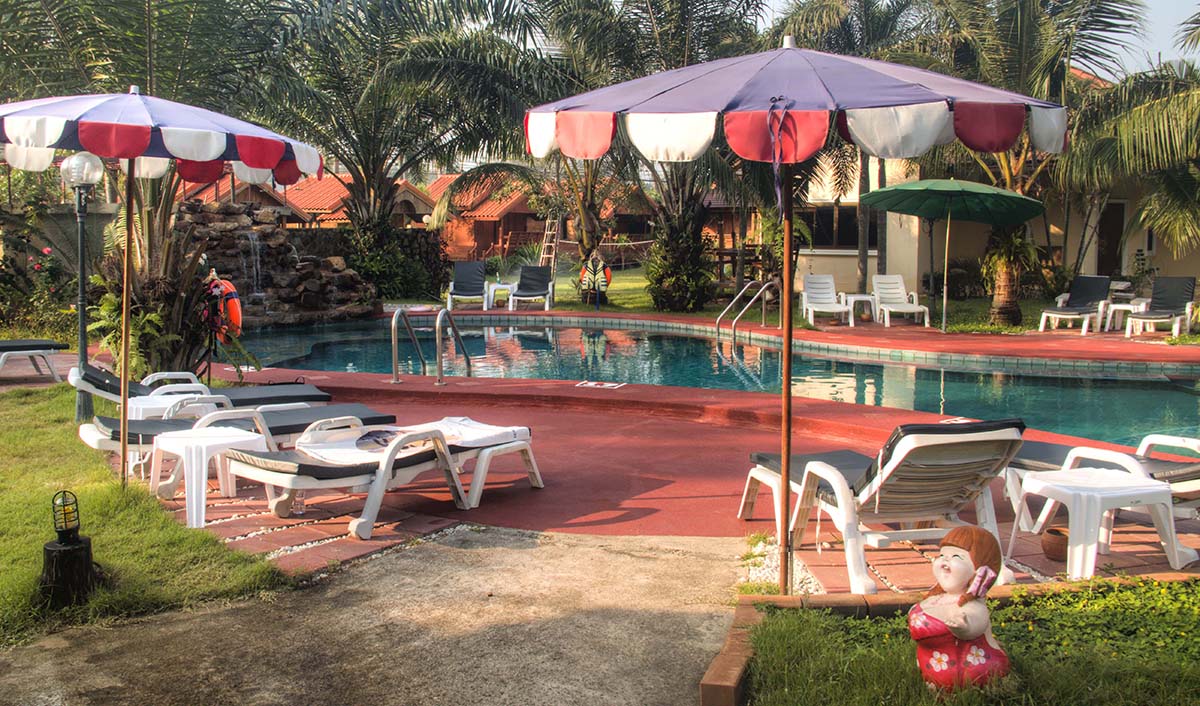 In a side road of the main motorway between Pattaya City and Sattahip, you will find the Phoenix Golf Club… Well, that’s pretty interesting if you’re into playing golf, but for us, this was only the sign to look at the other side of the road because according to our map this was where we should find Phuan Naturist Village, the latest addition to the growing list of resorts affiliated with Naturist Association Thailand.
And indeed, we saw the roof of some cottages popping up behind a large wall with a sign saying the name of the resort. We had arrived at our third naturist resort in Thailand: Phuan Naturist Village. We have to say that after our visits to Barefeet in Bangkok and Lemon Tree in Phuket our expectations were quite high at the time. But boy, were they fulfilled!
UPDATE: This resort is permanently closed.

How to get to Phuan Naturist Village

Pattaya does have a domestic airport but has no direct flights from Bangkok, the capital of Thailand where most visitors arrive, because of its proximity to the city. From other destinations in the country like Phuket or Chiang Mai, you could choose to fly directly to Pattaya, but those who arrive in Bangkok mostly opt to take a taxi from the airport which will set you down about 1500 baht (which is more or less 50 USD). If you’re traveling on a budget like ourselves, there’s a much cheaper option though. There’s an excellent bus connection between Bangkok’s Ekemai bus station and Pattaya which runs every 10 minutes.
From Pattaya City, it’s still 20 kilometers to Phuan Naturist Village, so unless you’ve brought your hiking shoes it’s better to take a taxi. Keep in mind that most taxi drivers in Pattaya don’t know the place yet, so either direct them to before mentioned Phoenix Golf club or, much better, print the Thai directions from the website. 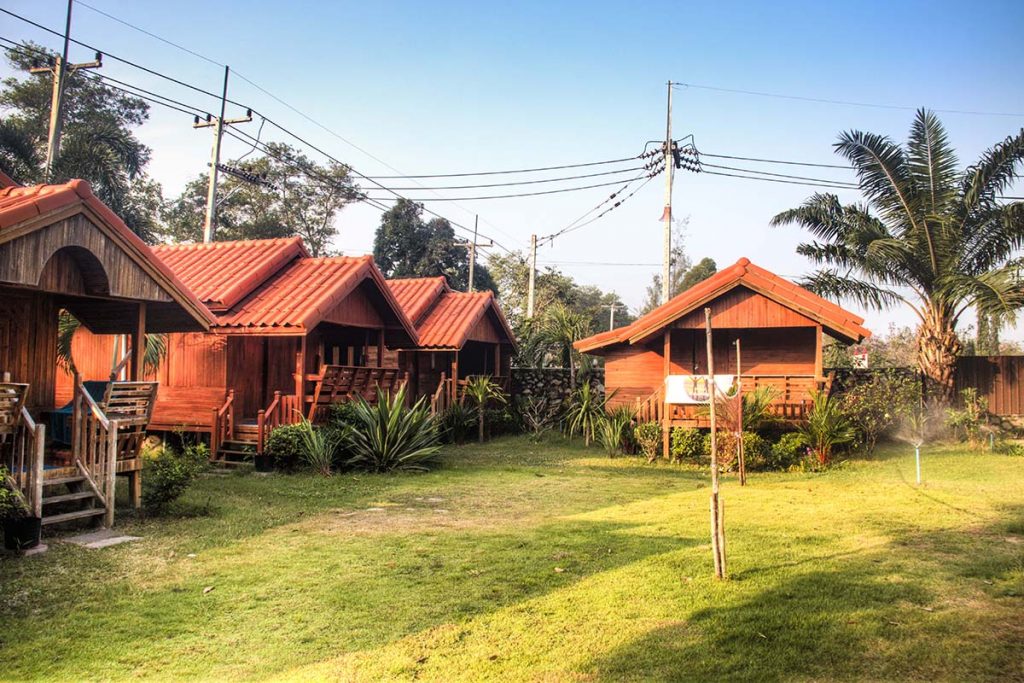 Where to stay at Phuan Naturist Village

At the time of writing (we have to add this because 2 villas can not be rented yet) we had the choice between a wooden bungalow, a room in a villa, or a complete two-bedroom villa.
We opted for the most economical choice: The bungalow. It’s a wooden cabin which looks pretty basic from the outside but does have all the necessary amenities like its own bathroom and even a TV and a small wardrobe. Although we have to say that we just LOVE this type of accommodation, we can understand that for some it won’t be sufficient. The bed is quite low to the ground and most visitors with a standard western height may not be able to stand straight while in the shower.
If you prefer to have that little more comfort (or space) in your room, we would advise you to pay the 500 baht more which will take you to a room in one of the villas. Or what the heck, this is your holiday and a whole villa might just make you feel the king or queen of Phuan Village! The choice is yours.

What to do at Phuan Naturist Village

Let’s start with the top attraction in this place: The swimming pool! Other than the fact that it’s beautifully shaped in the setting, it’s also the biggest naturist swimming pool you will find in all of Thailand. It’s still not an Olympic pool, but it’s getting pretty close.
That’s not all of the good news. A delicious breakfast is included in the room price (choice between “American” and “Thai”) and the restaurant is open during the day. Although they did not have their own cook while we were there, they will provide some great Thai takeaway food. Because of the available space, Phuan Village is one of the bigger naturist resorts in Thailand, there is lots of space to relax in the garden or around the pool. There are also plenty of board games, there’s a foosball table, a badminton court, a darts board, a small library, and a pool (the one with the numbered balls) table, all free of charge. 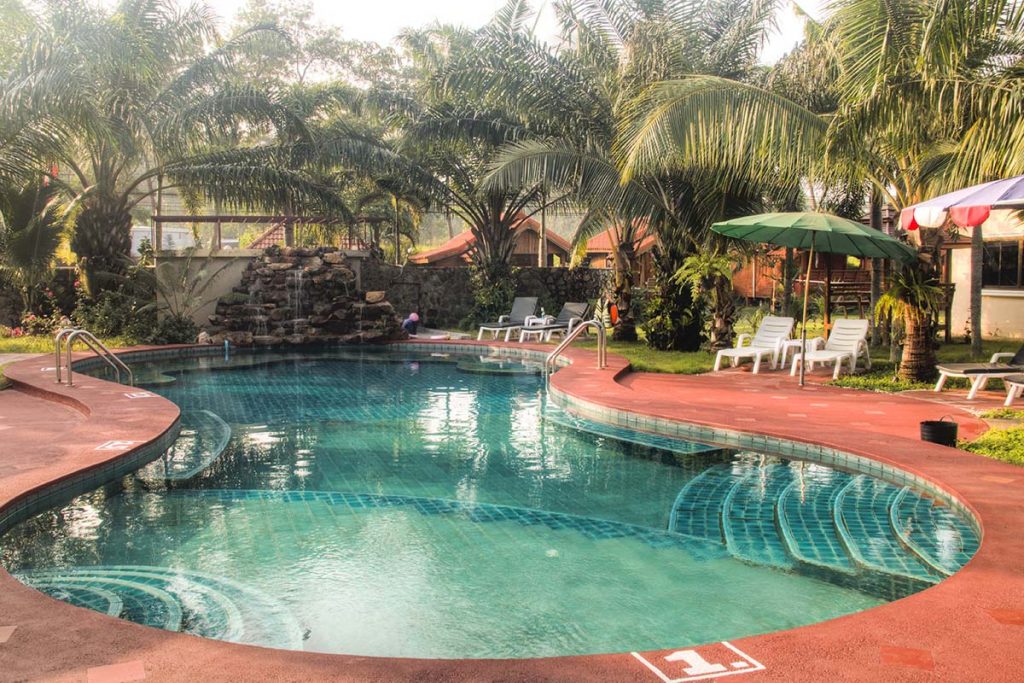 Although Phuan Village is on a side road of the main motorway, there is quite some traffic during the day. We felt that when we were relaxing near the pool, the noise was minimal but in the dining area, which is located next to the road, it could be disturbing from time to time. Luckily, during the evenings and the nights, the traffic was minimal. Our bungalow was just next to the main road and although there were free earplugs to use, we never needed them.
Phuan Village promotes itself as a family resort and we can easily understand why. There are enough facilities to keep yourself, your husband, and your kids busy for a couple of days. You’re outside of the hectic Pattaya city and yet you’re still close to some of the main family hot spots like Pattaya Airpark (2km), Dolphin World (3km), Cartoon Network Amazone Waterpark (10km), and Ramayana Waterpark (12km).
Even if you’ve left your kids behind at home or at some dark Pattaya go-go bar, you can enjoy yourself at the Ocean Marina Yacht Club (7km) or the Phoenix Gold Golf Club (500m). 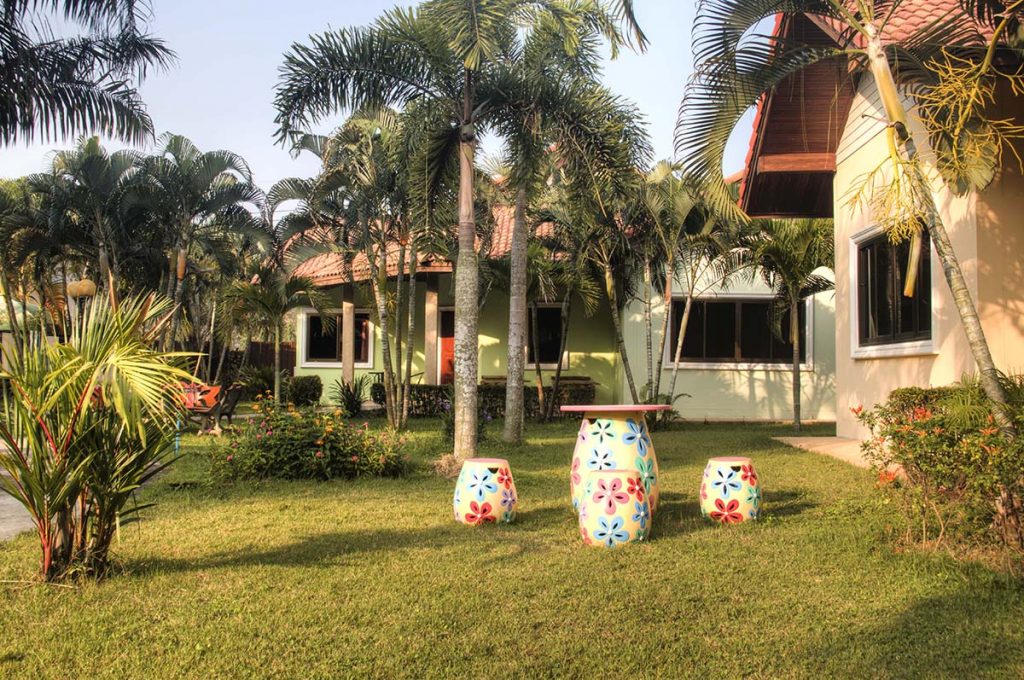 Ploy, the owner, is a very nice Thai lady who does her very best to make you feel comfortable at her resort. She will make sure you have the best time.
But one of the highlights of the crew though is the handyman. He’s the first one up in the morning and the last one who goes to bed. And he ALWAYS smiles. Legend says that he was hired to fix some broken lamps or whatever and because this is a nudist place he was supposed to work naked. He took off his clothes and started smiling. Since then he’s a permanent member of the crew and only gets (a limited number of) clothes on when he has to go to town. Just like Ploy by the way, during the five days we were there, the only clothes we saw her wear were an apron while she was cooking breakfast.
Next to Ploy and the handyman, there’s also a very nice girl taking care of the daily cleaning and another girl doing the (quite cheap, by the way) massages. And from what we’ve heard, there will soon be a cook as well. 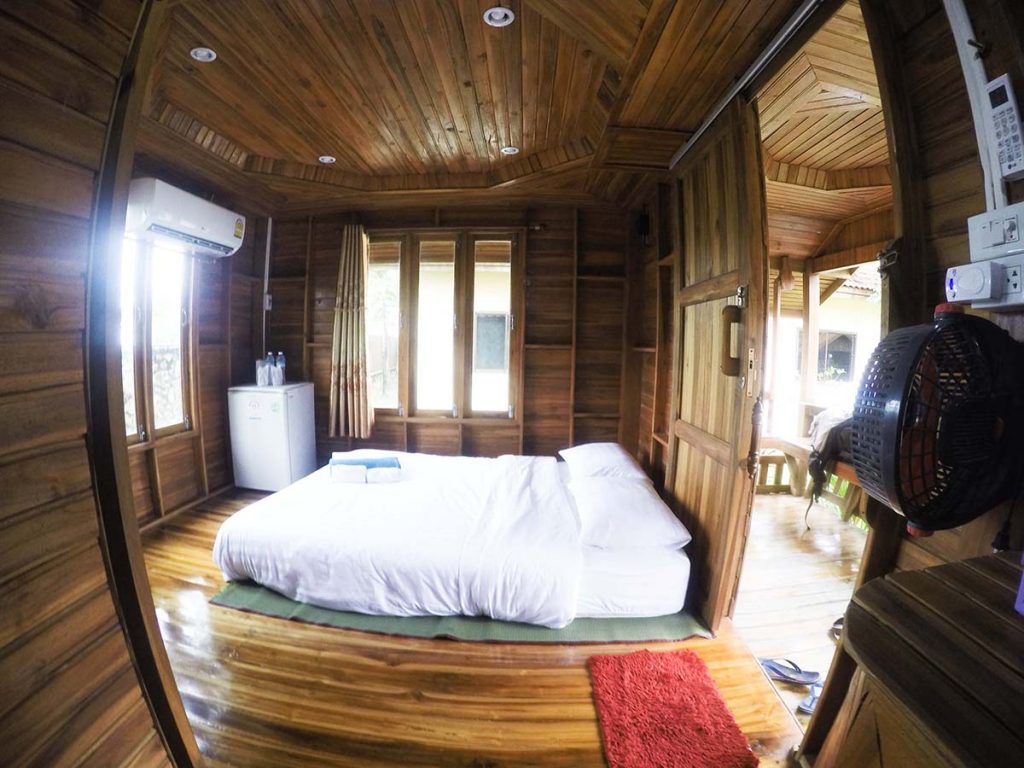 It was a bit sad to see that the number of other guests was quite limited while we were there. We’ve met a Dutch-Thai couple, a Dutch couple, an Indian couple, and a Thai couple. Other than that there were several day visitors.
And that was it. For such a nice and big place, we would have appreciated some more guests.

Phuan Naturist Village is clearly the new kid on the block when it comes to naturism in Thailand and it still has to deserve its name. Other than that it’s still facing a number of teething problems. But it is a place we strongly believe will be a success and therefore we want to do a big shout out: If you find yourself in the area of Pattaya or in Thailand in general and you’re looking for a place to relax in the nude for yourself, with your partner or with the whole family, go to Phuan Naturist Village, you won’t regret it!
More info and reservations: http://www.phuannaturistvillage.com
More photos: On our Facebook
Read more about this resort on NUDE
Disclaimer: We have been invited as guests of Phuan Naturist Village, but of course all opinions are our own. We are super confident you will love this place as much as we did!
Naturist Destinations ➡️ Thailand