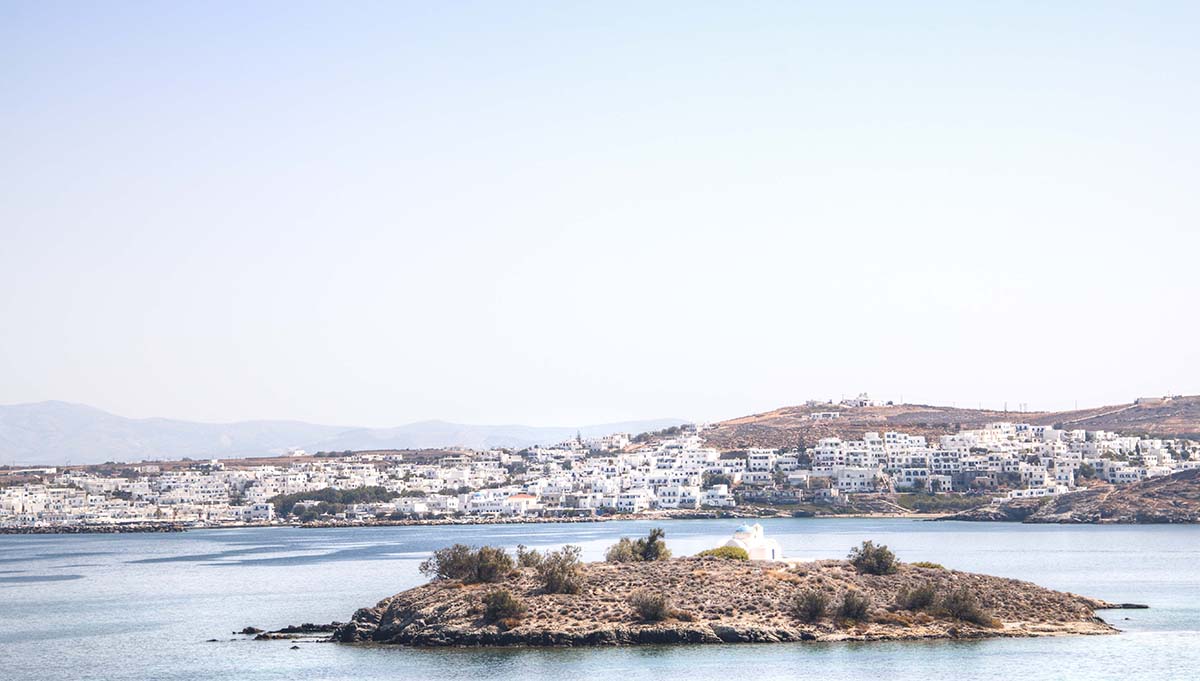 From our Naked Wanderings Cyclades Islands Basecamp on Antiparos with the most beautiful Greek nude beach, it was only a fifteen-minute ferry ride to the neighboring and much bigger island Paros. So on a nice Sunday morning, we woke up early, walked to the scooter rental shop, went through some useless price negotiations, and ended up with a black and blue 50cc beast. Only minutes later we embarked on the ferry with high expectations. If we had been able to find such a nice range of nude beaches on a small island like Antiparos, what would it be on its bigger brother?
We have to warn you, this is not a happy story.

The day did have a fabulous start though, our first destination on Paros was Lageri beach, located on the northeastern tip of the island. A pretty long ride when your beast rarely reaches 40 kilometers per hour (that’s downhill and backwind), but everything for a skinny dip, right? Another reason why we picked this place as our start point was because Captain Barefoot had been raving about it, writing about half a novel to describe the beauty of the beach. We’ll try to keep it a bit shorter.
What could have also been shorter was the ride there. We had to drive up and down from Xafira to Santa Maria twice before we eventually found the right road and after decently cursing the Greek government for not putting enough signs and the Creator for designing the island in such a complicated way, we parked the beast and walked to the beach (later we would find out that many others easily found Lageri beach, so another cause for the trouble could also be our miserable navigation skills, but that’s off-topic). Anyway, we found the beach and WOW! What a place! A long stretch of sand facing flat emerald green waters. It was like sitting next to the biggest and most beautiful swimming pool in the world.
➡️ Click Here for the best hotel deals on Paros
We were clearly not the only ones who thought so, as the beach was crowded. Surprisingly (in a good way) about 90% of the other visitors were nudies as well. We didn’t really expect this based on our previous experiences on Greek beaches, especially since the ratio on the official nudist beach on Antiparos was only about 50-50. In fact, it was nice to see that the main Lageri beach was almost completely nude and that the textiles resided in the nearby smaller coves. Our perfect world. The crowd was quite mixed concerning age and gender, but the majority of the other visitors did seem to be male couples.
So we spent about an hour and a half enjoying the sun, the sea, and the company of so many other nudies, but then we decided that we had to move on. There were many other places to explore.
A decision we would soon regret. 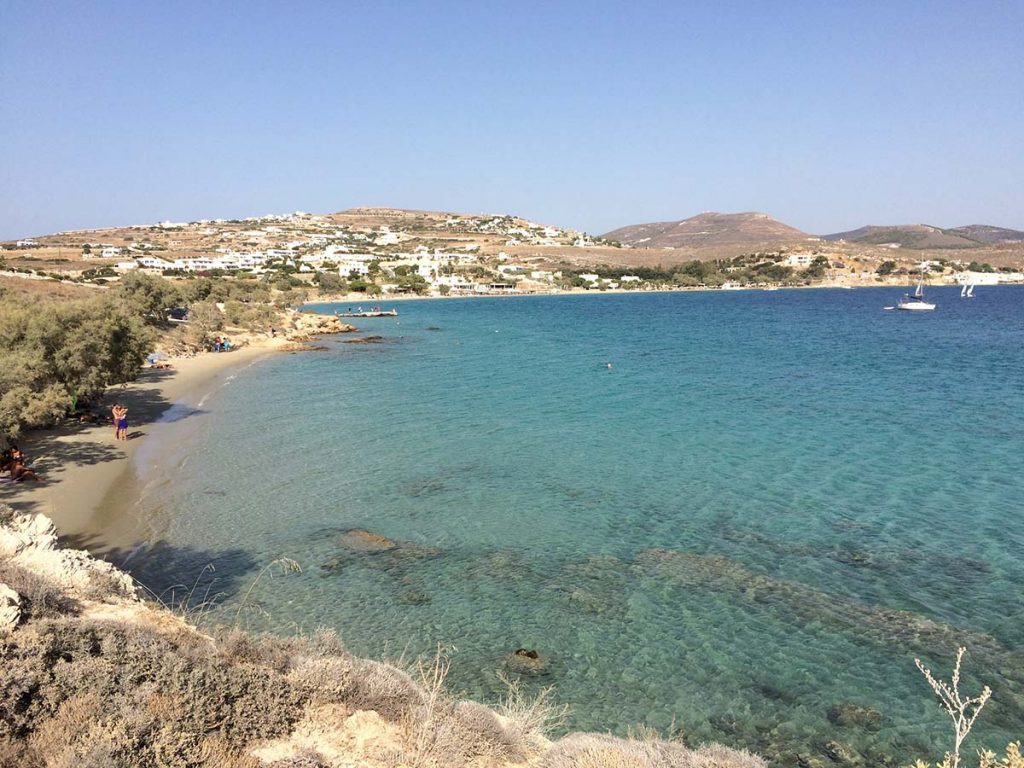 The not so nude beaches

The next stop on our list would be Tourkou beach, on the other side of the bay. We had been told that this beach is often referred to as Monastiri, but that we should not make the mistake to go naked on the real Monastiri beach. Little chance for that, when we passed that beach it was so crowded that no nudist would dare to bare. So we drove further until the road ended.
Now, where’s that Tourkou beach?
Nobody had told us that from the end of the road you have another walk of about an hour (one way) to reach the beach. It was around noon, the heat was kicking in and we started calculating. One hour to go plus one hour to return plus… even if we only go for a quick swim we’ll lose at least 2.5 hours. There were some more places on our map so we decided to check out those instead.
Fun activities on Paros:
⭐ Full-Day Boat Trip to Santorini
⭐ Day Trip to Mykonos
⭐ Full Day Sailing Cruise in the Small Cyclades
The next stop was the nearby Porto Paros. According to the Captain’s statistics, previous visitors had found a nudist ratio of something between 50% and 98%, which sounded very promising. When we got there, the nudist ratio was 0%. Not a single nudist. We found a crowded beach with textiles arranged like sardines next to each other and no possibility to get a quick naked swim away from the others.
So we moved on to Kolymbithres beach, still in the same bay and only a couple of kilometers more south. A beautiful place, recognizable by its huge rock formations. On the main beach, there was a beach bar and a couple of busloads of textiles, but we couldn’t imagine that we wouldn’t find a hidden cove between those rocks. And we found lots of those. Unfortunately, all inhabited by textiles, who searched and found a more serene place away from the loud music.
Again no luck. 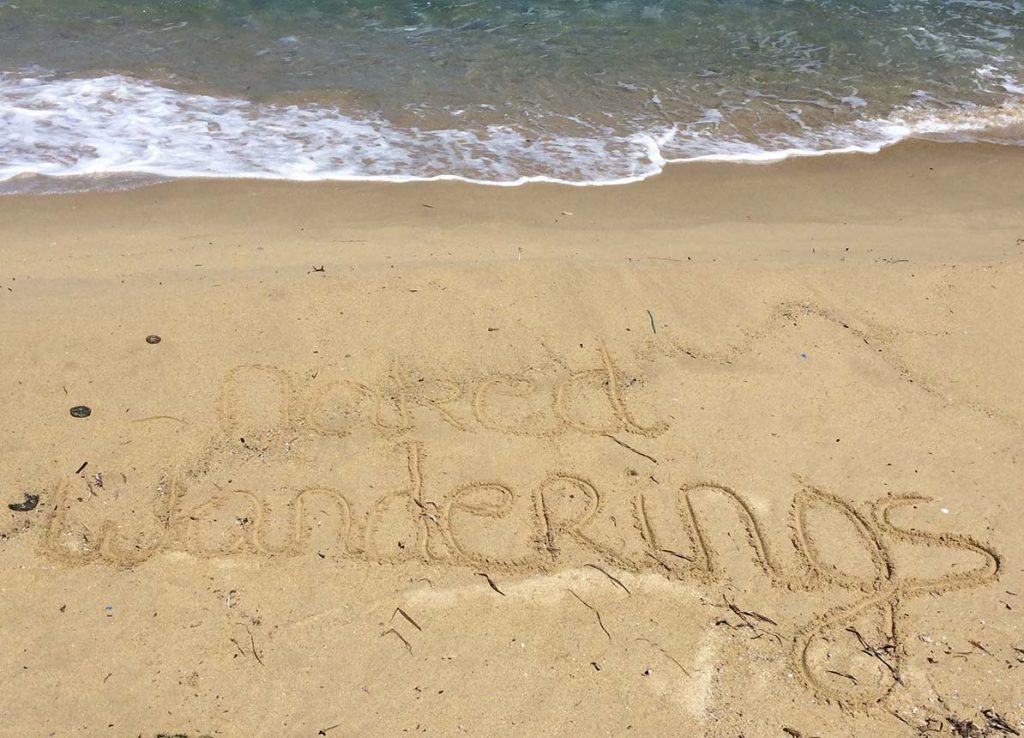 Back towards Paroika, the capital of the island, we had two more possible nude beaches on our list. The first one we decided to check out was Krios. Again we walked the whole beach, again we found a couple of coves, and again they were all taken by textiles and not another nudie in sight. At this point, we were becoming quite desperate and we wondered why the hell we had left Lageri beach so quickly. We could’ve spent all day among nudists on the most beautiful beach but instead, we were driving from one disappointment to another.
We decided that we wouldn’t get back on the scooter before we had been naked. A daring thought after our experiences of the last several hours, but sometimes you have to give faith a kick in the butt before it starts to listen.
So we walked. Past the main Krios beach, past several coves with textiles who we gave the evil eye and several mental curses which would make even the roughest sailors cry. And we walked further, past the church not caring about the distance even if we had to walk until sunset, when all the textiles went to their hotel rooms to change clothes, naked we would be.
Luckily we didn’t have to wait that long. Just before we arrived at Marsala beach we couldn’t believe what we saw. A small rocky cove with… wait for it… TWO NUDIES!
We can be pretty fast to get out of our clothes, but that moment we must have set a world record. We didn’t care that it wasn’t a really nice place or that the rocks were too hard and too pointy, we were naked at last.

After about an hour we decided that we had time to check out one more place and we picked Voutakos beach in the south-west of the island. We tried to get there, didn’t find the right road, drove up and down the wrong road several times, tried again but without success. The sun was about to set, we were getting hungry and we couldn’t be bothered anymore. We had tried. So we decided to go back to Antiparos, get ourselves a big souflaki, and eat it on the official nudist beach.
Were we disappointed because we drove so many kilometers for nothing? Not at all. We had a nice day, we had a lot of fun and we saw many beautiful places.
Were we disappointed because the Captain gave us wrong information? Certainly not. We knew that most of the info on Captain Barefoot dates from ten or fifteen years ago.
What did disappoint us was that so much had changed during those ten years. In the past, Paros seemed to have a lot of options for nudists, now we only found two of which the first one was the only decent one. Why have we all been pushed to the same beach?
We didn’t have enough time to make a statement, but if you ever find yourself on Paros for a couple of days, please reclaim our beaches!
Find the best nudist accommodation in the area on NUDE

1 thought on “Getting naked on Paros, Greece”