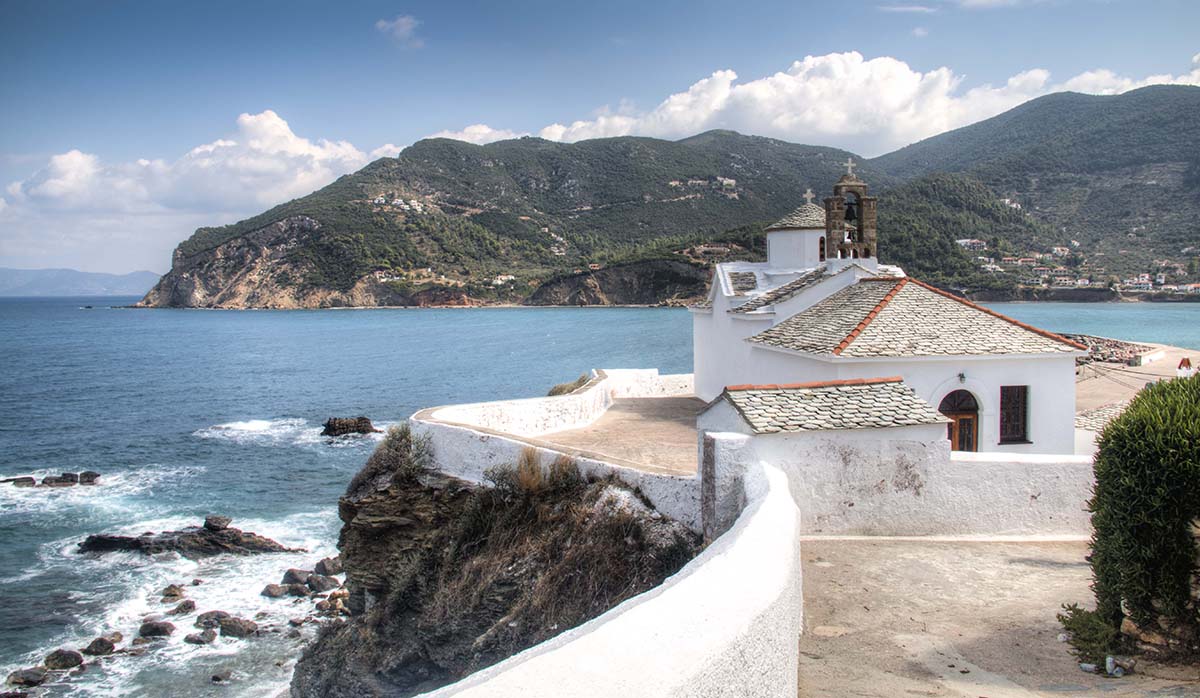 If you’ve read our last post, you already know that luck wasn’t on our side on Skopelos island, well, concerning weather that is.
But somehow we had expected it, it was already past the end of the season and autumn had to kick in one day. And it did. When we were on the island. After three days of waiting (no, that’s not true, we didn’t really sit there waiting but we enjoyed ourselves doing a lot of other cool stuff on the island) the time had finally come to check out the nude beaches that would be waiting for us in Skopelos.
Since Skopelos has no specific accommodation for nudists, we stayed in Rigas hotel in Skopelos town, where the manager was a great help with arranging our trip along the island’s beaches.
We made friends with a Greek-Czech couple who happened to have nothing to do that day and wanted to take us around in their car and off we went. We drove all the way from Skopelos town to Glossa and then slowly back to Skopelos stopping at every beach we spotted. We’re not going to list all of the beaches here, only the ones we found decent enough for a skinny dip. 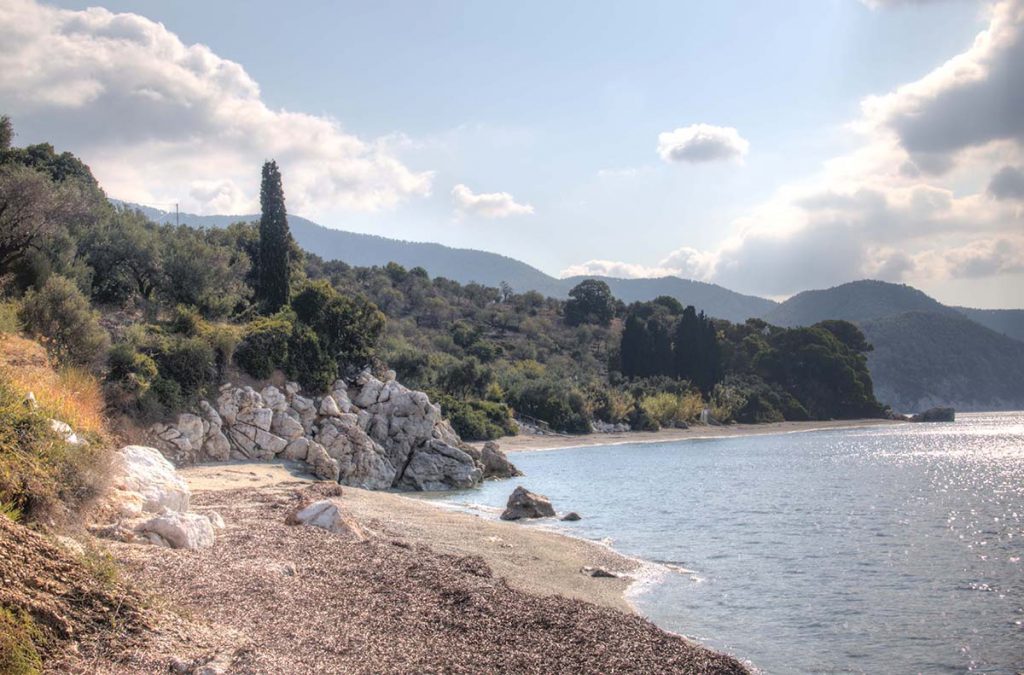 All beaches that are accessible by car are on the west side of the island, along the main road from Skopelos to Glossa. We were told that on the other side of the island there are even better beaches, but those re only accessible by boat. We were already lucky to have found friends with a car, but a boat they didn’t have.
Kalyves beach is the closest beach to Glossa town, along the main road take the turn off saying “Kalyves-Armenopetra” and follow the small road that turns into a dirt road. We took it all the way to the end with a Volvo V40, but our driver was Greek. If you’re not that confident on steep dirt roads, better park a bit higher and walk the last part.
At the end of the road, you’ll arrive at Armenopetra beach, which was completely deserted and no problem going naked on. But in high season that will not be the case. When facing the sea it’s better to start walking left, past a rocky part, and a small tavern towards some huge rocks where the sand beach starts. This is Kalyves beach. The part before the huge rocks is where the naturists are said to come, but there too was not a single soul on the whole beach. 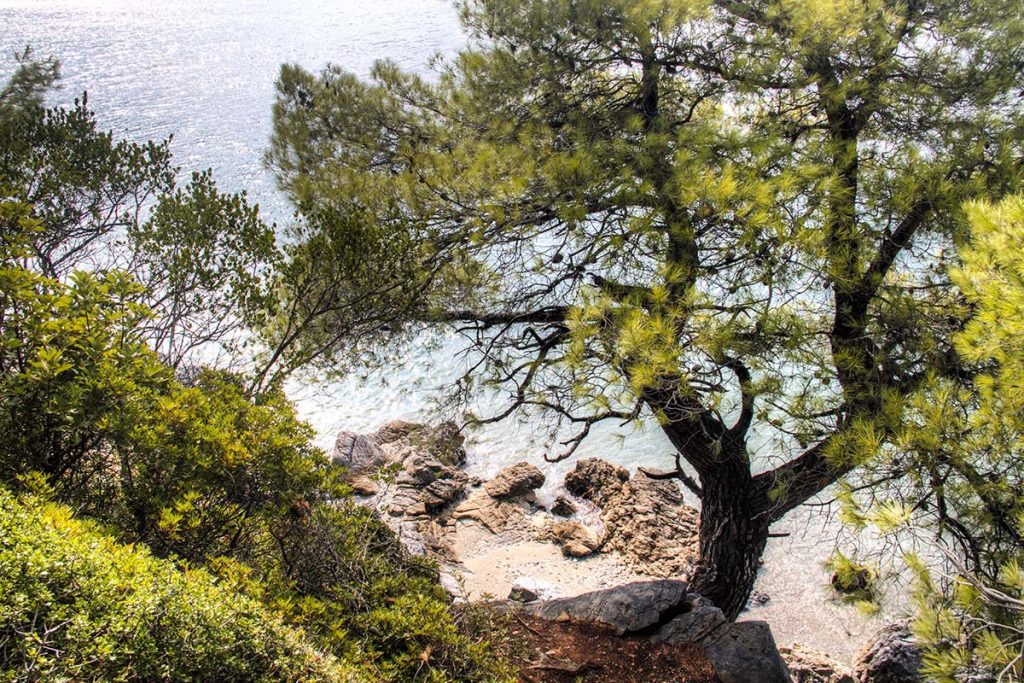 Panormos is one of the most famous beaches on the island, located in a beautiful bay with shallow green waters and easily accessed via the main road. Although the beach bar was closed for the season when we were there and the sunbeds and parasols were packed away until next summer, it was easy to see that this beach is a very lively spot during high season, so we didn’t really have big hopes on finding a place suitable for naturists. Until we started walking.
When facing the sea, we walked to the right until the end of the beach where we found a small path over the rocks and through the bushes. After a couple of minutes, we spotted two small couple size beaches down below which could be accessed from the path and a little bit further there was even a larger sandy beach which is probably empty as well for most of the summer except when the main beach gets too crowdy (read: in August). All along the path we also spotted some big flat rocks which would certainly be suitable for some naked tanning.
We walked back towards the main beach and went to the other side (when facing the sea to the left) and also there we found a path going into the woods and leading to large flat rocks where one as well could relax in the bare away from the crowds and the loud music from the beach bar. 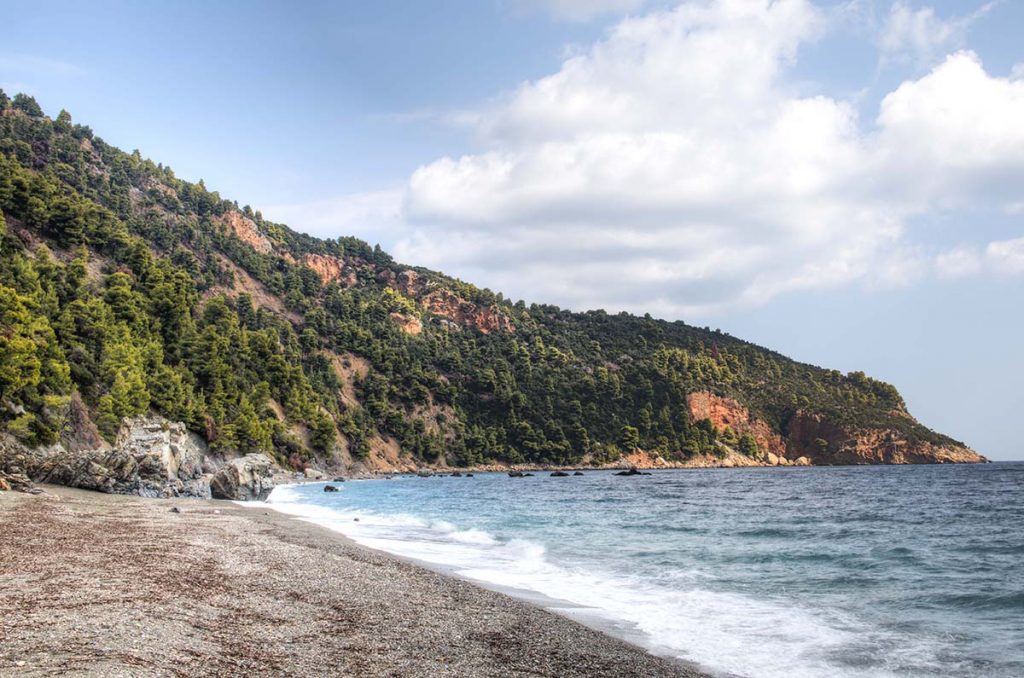 Almost at the end of our way back, only minutes away from Skopelos town, we went to the real deal, the official nude beach. We were happy that we’d first checked out the other places because if we’d come to Velanio first, we’d probably just stayed until sunset.
The place is a combination of three beaches: Stafilos, Velanio textile, and Velanio nudist beach.
Stafilos is the first beach you reach when you’ve taken the exit to the similarly named town and walked towards the sea. It’s a busy town beach complete with bars and sunbeds and loads of people (in summer, we imagine, when we were there, there was again nobody).
➡️ Click Here to find hotels near Velanio beach
When you follow Stafilos beach all the way to the left where there is (of course) a path leading over some rocks and you end up at Velanio textile beach. Also with sunbeds and a small bar which is rather just a kiosk selling beers and refreshments. As soon as you enter Velanio textile beach you see a bunch of huge rocks on the coast and you know that’s where you want to go. On one of the rocks, you see the sign “nude beach” and past that you’ll see a beautiful stretch of several hundreds of meters sand beach, blue-green waters surrounded by green hills.
You have arrived. 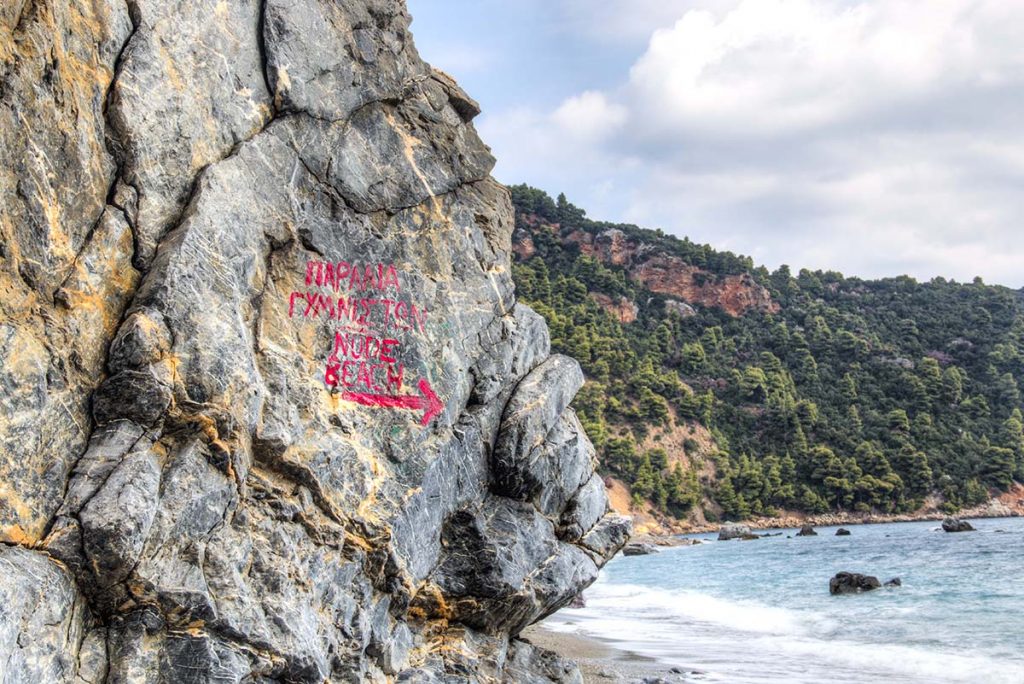 Except for accommodation for nudies, Skopelos has several nice things to offer for the naturist. The official nude beach is probably the best one and if the purpose of your holiday is skinny dipping and getting a tan, this might be the only place you want to go. Especially due to its proximity to Skopelos town. But for those who like to check out other places, Panormos and Kalyves beaches are well worth a visit. Maybe you do find a friend with a boat (or you have one yourself) and you can go nude on the other side of the island or maybe you can talk one of the local tour guides into taking you on a naked dive, hike, or mountain bike ride.
Our main advice for Skopelos island is to go either in the beginning of the season or at the end, when the majority of the tourists are gone you can get naked on almost every part of ever beach.
Find the best nudist accommodation in the area on NUDE

2 thoughts on “Getting naked on Skopelos, Greece”