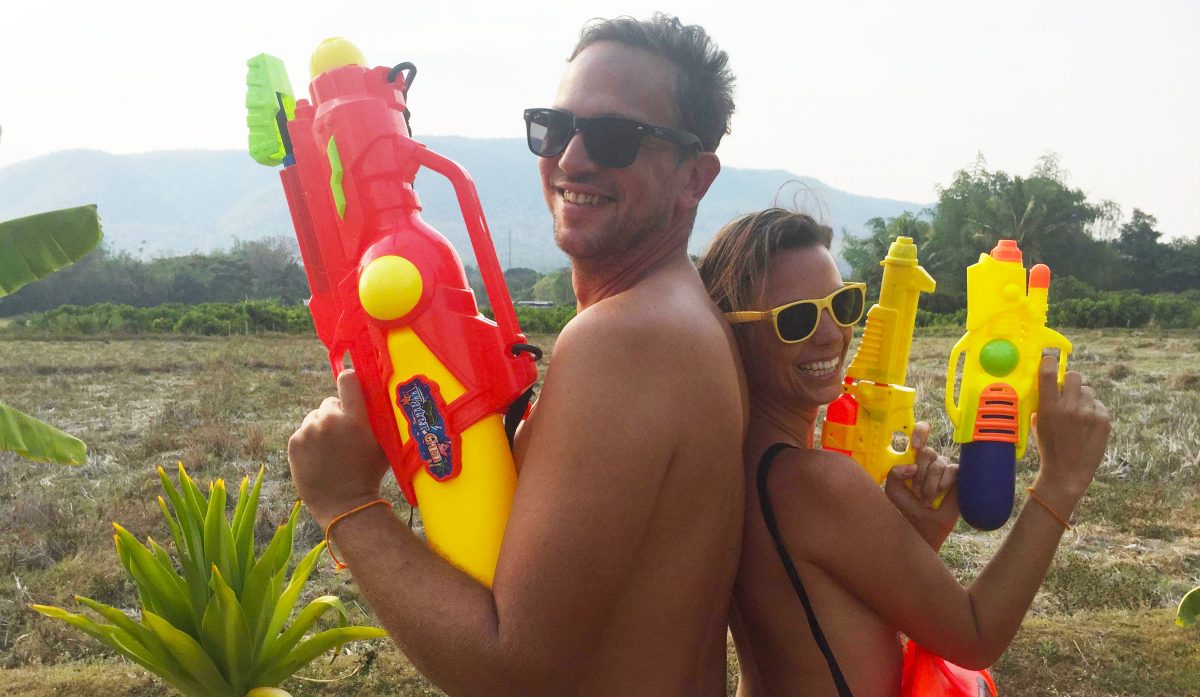 Have you ever heard about Songkran? Well, don’t worry if you haven’t, until a month of two before we also had no idea what it is.
Long story short, Songkran is the Thai new year. In fact, it used to be the Thai new year, because since 1940 the government has set the official new year’s date to the first of January, to be more aligned with the west. But yet Songkran is still celebrated all over the country and usually takes three to four days, between the 13th or 14th of April until the 16th.
Why are we bothering you with the details of an ancient Thai holiday?
Well, Songkran is also known as the “water festival”. Basically this means that there are three days in the year that you are allowed to (or actually supposed to) try to wet every human being that comes within the range of your water gun. Pretty cool right?
Water games are a lot of fun and you have to imagine that April is the hottest month of the year in Thailand with temperatures easily reaching 40°C (that’s over a hundred for you who use Fahrenheit), so we started thinking… What would be the best way to celebrate this? Naked of course! How cool would it be to celebrate a water festival in the nude? Soon we found ourselves writing an e-mail to naturist resort Oriental Village to ask whether they had a free room for the weekend. Luckily, there was one left.

Arriving at the nude water games

On Friday in the early afternoon, the first day of Songkran, we arrived at the Oriental Village. We walked up to the gate, rang the bell, and… wait for it… Nothing happened. There we were, standing in front of the gate. We rang again and again… Nada. Luckily we had been here before so we knew the workaround to give ourselves entrance.
Even behind the gate, there was complete silence. Nobody there, nobody to check us in, and nobody trying to get others soaking wet. Pretty disappointing, as you can imagine. 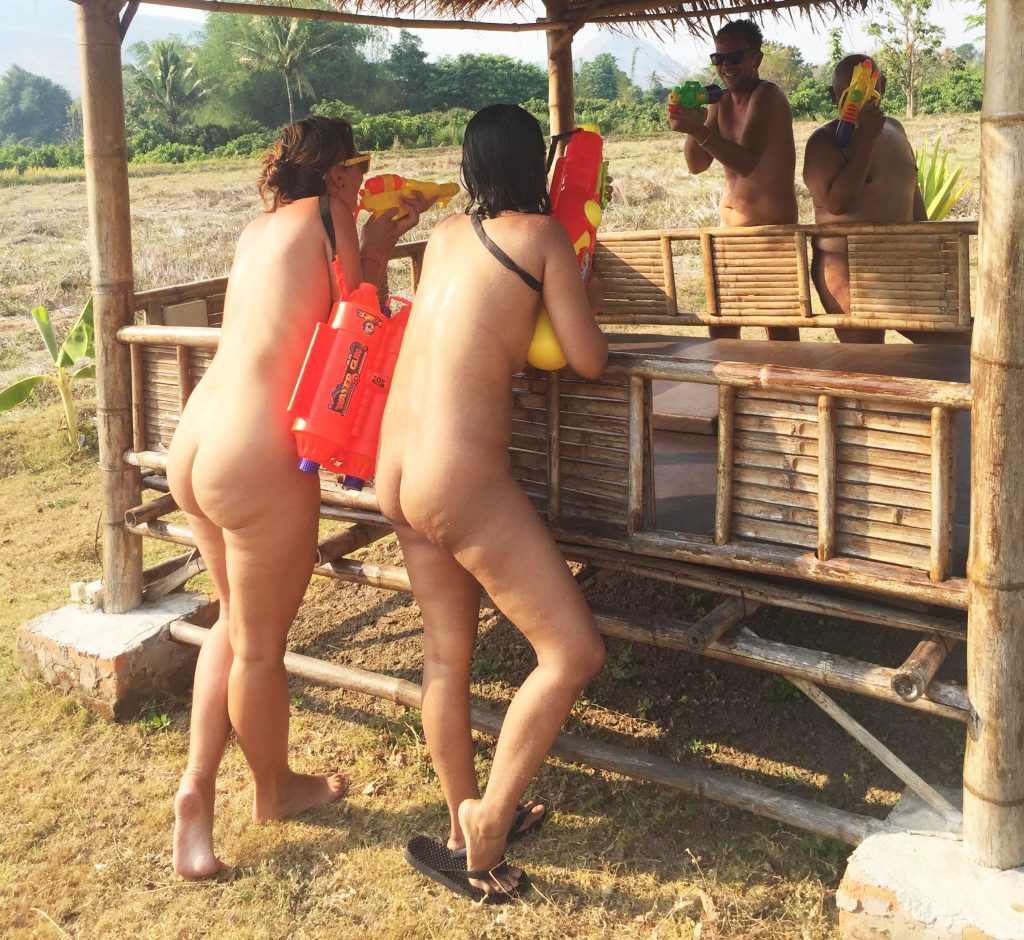 We walked further towards the swimming pool, still clothed, still carrying that heavy backpack, with the hope to find somebody who could tell us which bungalow we were staying in.
But then, from the corner of our eyes, we saw them coming… an army of naked people with water guns determined to attack the latecomers. We could run but we could not hide and soon we received our Songkran blessing. The game was on. Happy new year to us!

We celebrated our first day of the Thai new year the best way we could’ve imagined it. We were with family (well, actually a new, more international family consisting of French, Malaysian, English, and Australian naked family members), lazing around the pool, occasionally shooting some water at each other and if it took too long before someone finally shot us on that hot day, we just jumped in the pool to cool down.
Unfortunately, we had arrived just too late for the body painting part of the day (body painting on new year? Only at a nudist resort!), but we made up for that in the evening by eating twice as much of the delicious Thai new year’s dinner.
The next day, the fight was really on. Unfortunately this time it was with a little bit more clothes as we were going to hit the roads.
When you want to celebrate Songkran, you have two options. Either you stand by the road waiting for passers-by and then throw water at them, or you can load your car with all the water you can find and drive around town to aim at those waiting for you with their water guns. Since The Oriental Village is pretty much in the middle of nowhere, it would have been quite ridiculous and incredibly boring to be waiting for passers-by. So the back of a pickup truck was loaded with three tons of water, some buckets, about ten water guns, and the same amount of clothed nudies who were ready to give those Thais a nice bath.
This may all sound very childish and when we think about it, it actually was, but it’s soooo much fun! We were an army out there, two spotters yelling “left!” and “right” and a team of snipers trying to make the “enemy” as wet as possible, while getting immensely soaked ourselves. 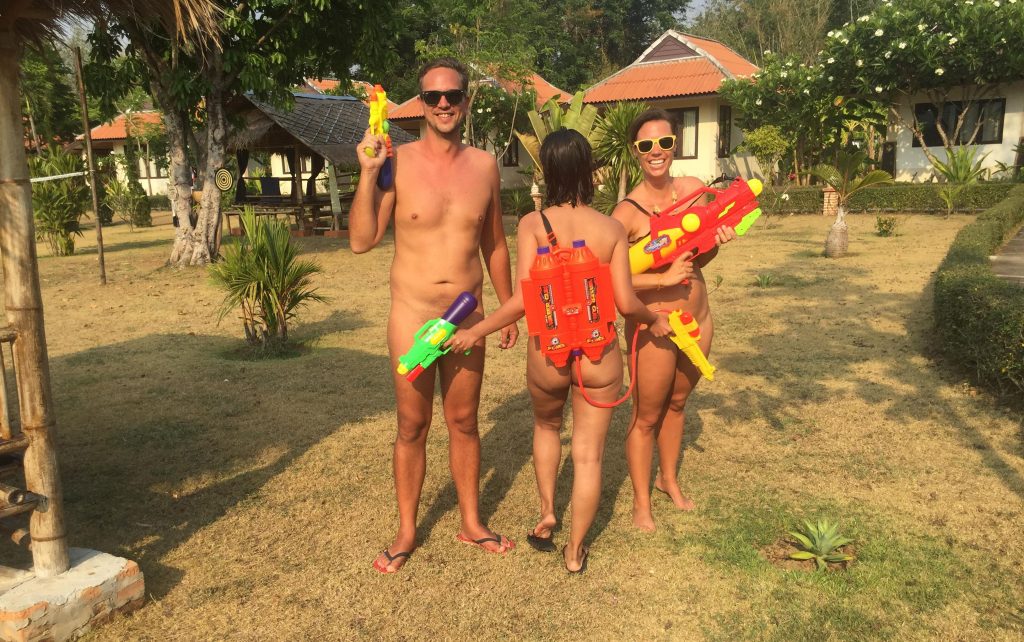 What does it mean to celebrate Songkran in the nude?

In the end, we believe that one of the things that make nudism such a special lifestyle is the social factor. Swimming naked is great, hiking naked is a lot of fun, not having to think about what to wear and not having to do laundry that much is just very convenient, but hanging out with other nudies and talking about their experiences and life visions is just the best.
By activities like the celebration of Songkran (even though part of it was done clothed), people are brought together even more.
This is nothing new by the way, we’ve already said the same thing that time when we had this incredible beach party in Greece, but every time we have such fun activities again, we are reminded of the fact that this is the way forward for nudism. We need more naked beach parties, we need more Songkran celebrations, we need more games, gatherings, tournaments, festivals, whatever… As long as it brings people together.
Because nudism is something we do together and it rewards us with friends for life.
Naturist Destinations ➡️ Thailand