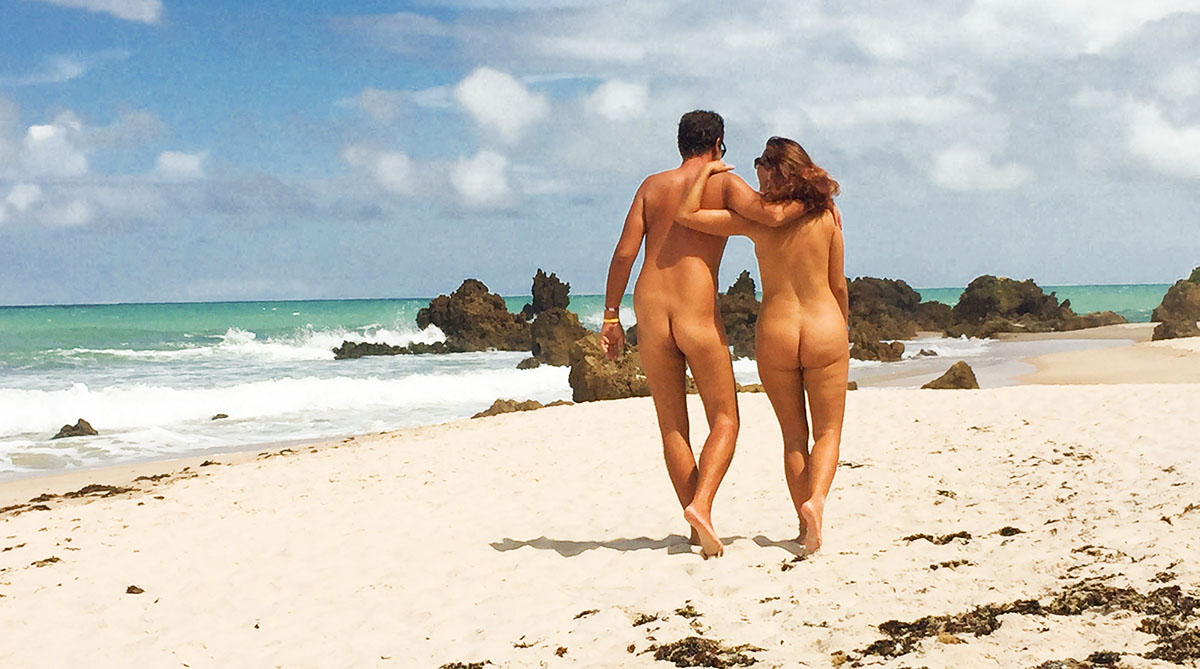 After spending three months searching for the best nude beaches and naturist resorts in Brazil and visiting more or less all of them, we can tell you that we learned quite a bit about nudism in Brazil. It’s been an interesting journey, that’s the least we can say. We met some wonderful people along the way, engaged in living the nudist lifestyle, and in promoting nudism throughout the country. And we found some differences with how nudism is experienced in Brazil in comparison with other parts of the world.
For us, our nude trip through Brazil has been a huge success and we can certainly recommend everyone to give it a try as well.
To get you started, here are 8 tips that will help you have the best nude time ever in Brazil! 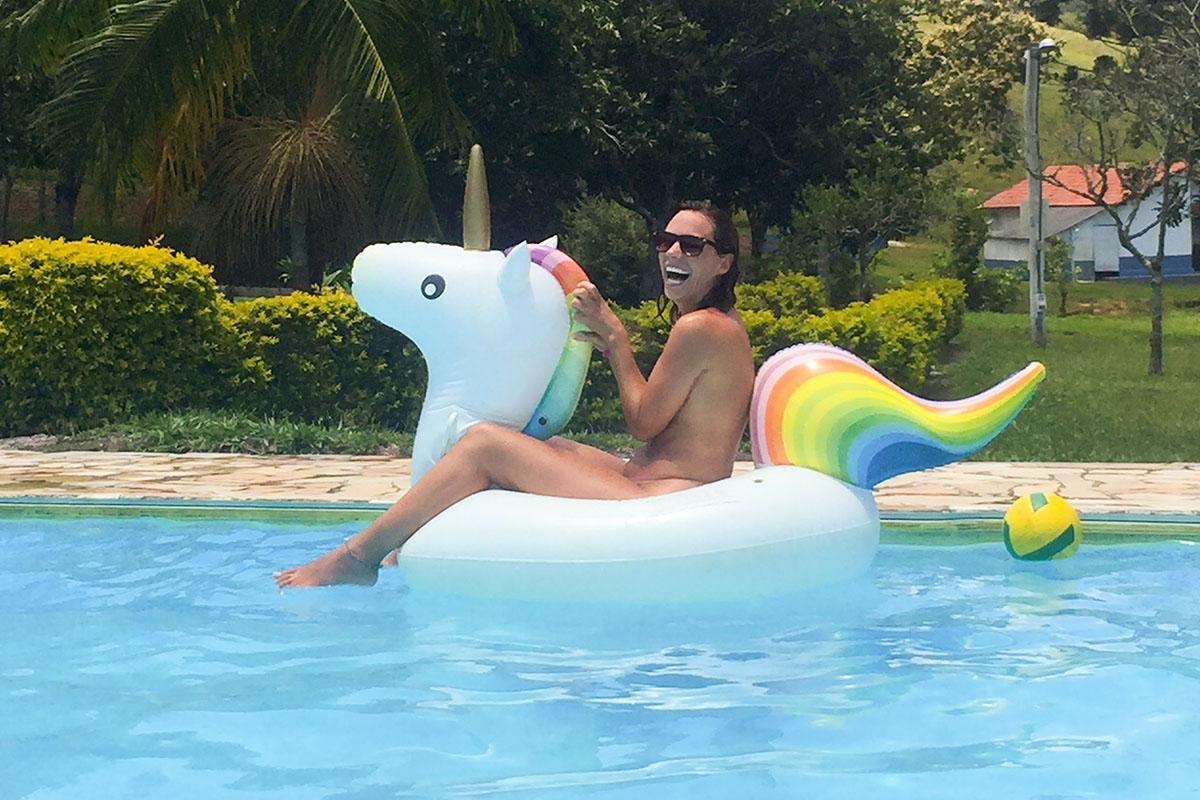 Just the other day we saw a picture online of three nude Brazilian women on a beach. Someone had responded that they couldn’t be nudists because they had tan lines. We understood the comment because we knew that this person was from northern USA. He came from a place where you will only get a tan when you’re actually sunbathing and as a nudist you sunbathe in the nude of course.
In Brazil, things are slightly different though. Most of the year the sun is that strong that you’re likely to get some tan just by getting the newspaper. We’ve spent a lot of time naked in Brazil and yet we kept gaining tan lines as well just from the time in between. Additionally, the bathing suit is considered casual clothing in most of Brazil. It’s very common to go shopping, walking, or even to the bank in a bikini. That’s where those tan lines come from of course.
So don’t be afraid to visit a Brazilian nude beach if you have tan lines, you’ll certainly not be the only one.

2. Bring your own booze

Brazilians like to drink during their free time and especially a visit to the beach will rarely happen if there are no beers to be had. Brazil is also the only country which we ever visited where literally every nude beach has at least one bar. Often even several. Buying your drinks the whole day at the bar comes with a cost of the course and if there’s another thing we can say about Brazilians is that they are quite inventive.
While we were visiting the nude beaches in Brazil, the beach bars were mostly filled with tourists. Nudists from Brazil bring their own styrofoam cooler filled with lots of ice and cold beers. So why not do like the Brazilians and save yourself some money by bringing your own cooler? 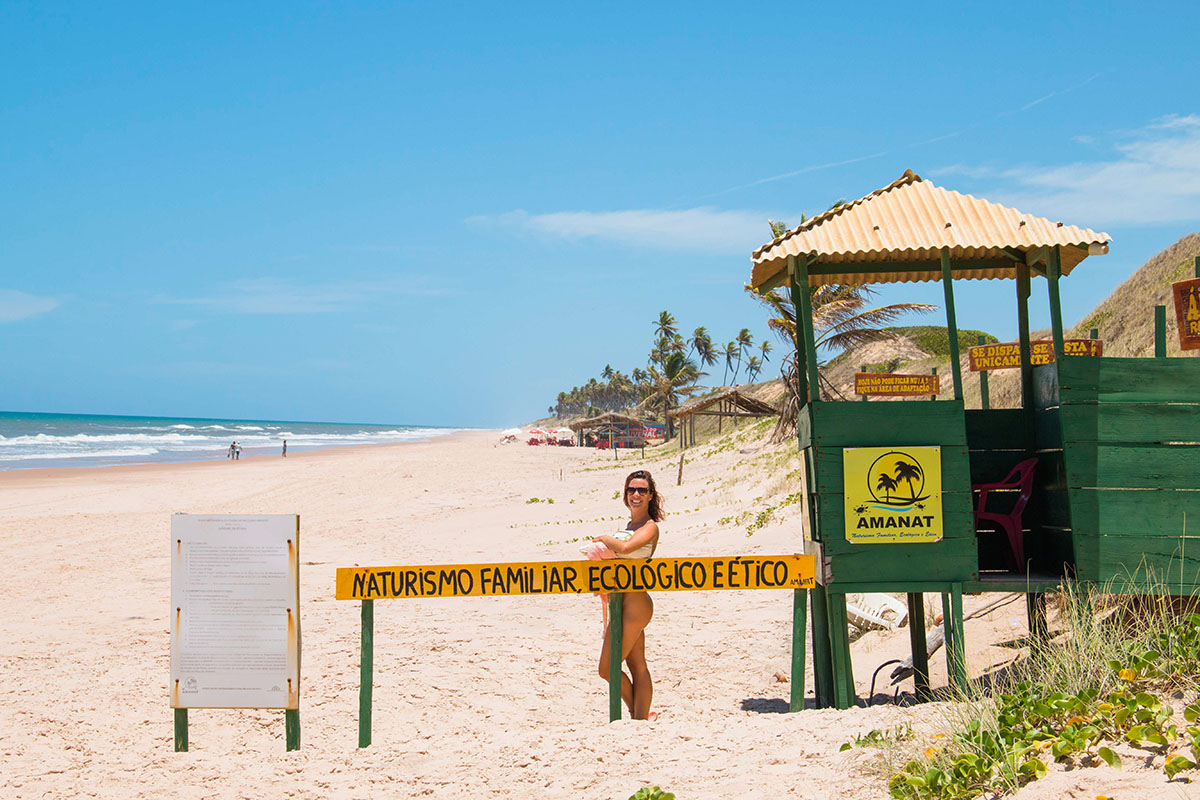 The pubic haircut which isn’t more than just a small vertical line is called the “Brazilian” in many parts of the world. But it’s a misunderstanding that all Brazilian women (or men) have one of those. If you happen to have a Brazilian, that will be totally fine. But if you prefer any other kind of shaving or no shaving at all, it won’t matter a single bit.
Just like everywhere else in the world, nudists in Brazil come in all different kinds and shapes and the same counts for their haircut down below.

Brazilians in general are fun, friendly, and curious people. This certainly counts for the Brazilian nudists as well. Something we noticed was that few of them master any other language than Portuguese. Luckily, Brazilians also happen to be patient and understanding so the language barrier never caused us big problems and was rather a source of funny conversations with lots of gestures. From both sides.
To win the appreciation of the Brazilians or to break the ice for any conversation it’s always good to learn at least a couple of words in Portuguese like “Hello” (Olá), “Thank you” (Obrigado/da) or “Where’s the nude beach?” (Onde fica a praia nudista?).
This will also help you to get to the right beach and the right kind of drink. 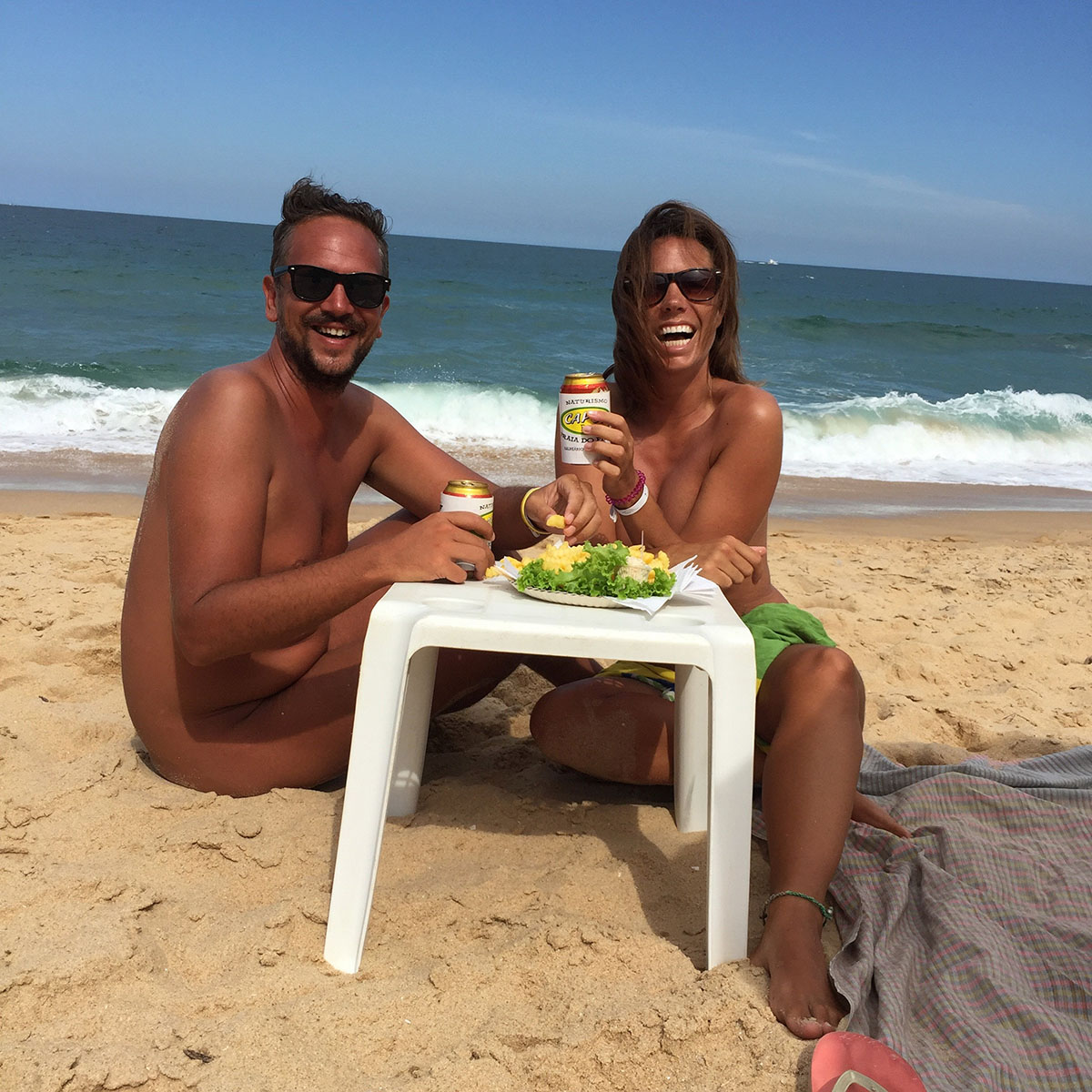 Public nudity is not as integrated in Brazil as many people think. We know, this is hard to believe when you see the pictures of Carnaval in Rio de Janeiro where the amount of female nipples almost outnumbers the number of feathers. But that’s Carnaval. Although Carnaval is an important part of many Brazilian lives, it’s not life itself. Probably the best example of this is that topless sunbathing is forbidden by law in Brazil and doing so will have you end up in serious trouble and with an empty wallet.
The only places where the Brazilian female nipple can be let free is at the nude beach and therefore it’s not uncommon to see women on nude beaches who are still wearing panties. For the western nudist, this might seem a bit awkward or unfair towards men, but we actually noticed some advantages. One is that nude beaches in general tend to attract quite a lot of women who like to sunbathe topless, so often there’s a great male/female balance. Another one is that it makes the step towards “real” nudism a lot smaller. More than once we’ve seen a woman enter the nude beach and go topless. After some time she would look at all the nudists and get rid of her panties as well.

Compared with Europe and the USA, nudism is still quite a young lifestyle in Brazil. While in the west there are many comments about how youth has become prude (with which we don’t actually agree, by the way), in Brazil it seems like the prudes are mostly found in the elder generations. We have been to few countries where the younger nudist generations were so much represented.
Nudism in Brazil is also becoming a more and more family-oriented lifestyle. That’s not really a surprise. Young couples try nudism, get hooked to the lifestyle, and when they have children they take them as well.
In Brazil, it doesn’t really matter how old or young you are to try nudism. There will almost always be others your age. 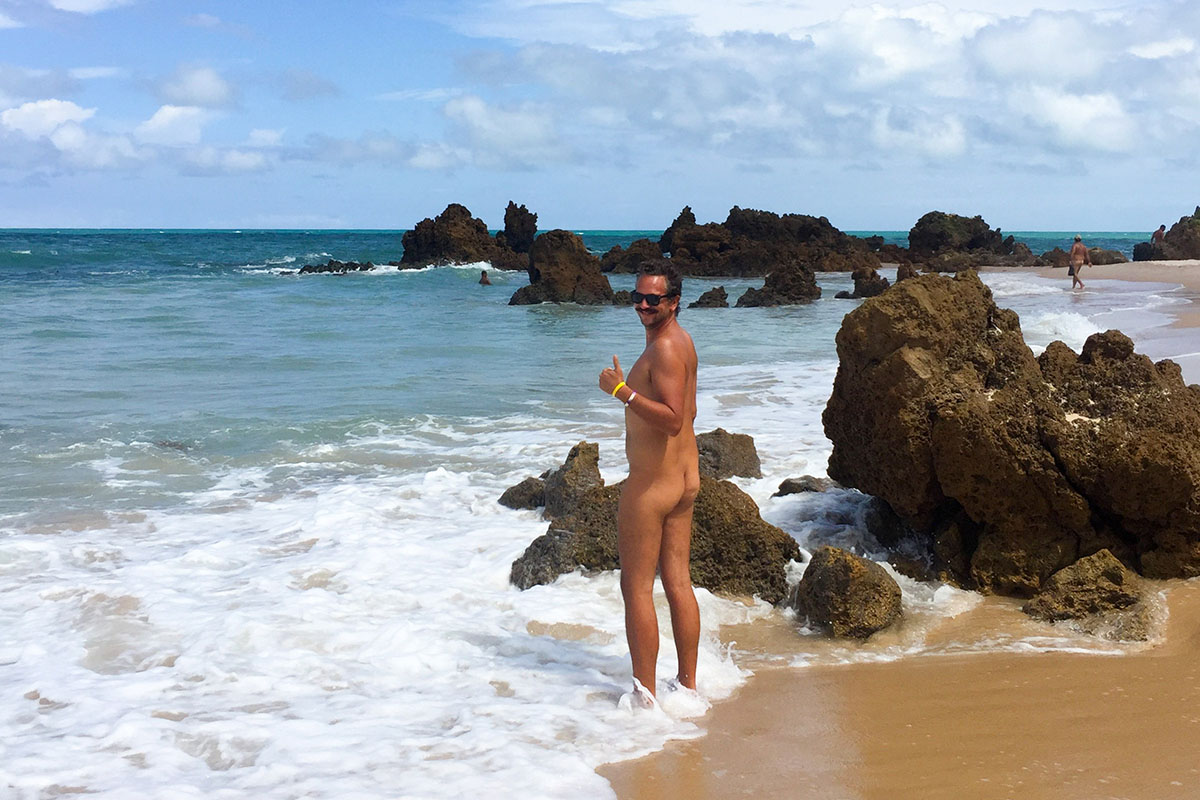 In Europe they are called “swingers”, in North America, the term “lifestylers” is more common. Basically these names are used for couples who enjoy swapping partners, often at places where social nudity is also common. But it goes further than that. Some lifestylers are monogamous but get excited by having sex when there are others around. Some get turned on by seeing others have sex. In any way, none of those practices are appreciated in genuine nudist resorts or at nude beaches.
There are special resorts where social nudity is allowed along with switching partners, exhibitionism, and voyeurism. We call them “swingers resorts” or “lifestyle resorts” but in Brazil, they got the unfortunate name “liberal naturist resorts”. Unfortunate, because it has nothing to do with genuine naturism/nudism and it does give naturism a bad name.
So before you book at a naturist place, make sure that it doesn’t say “liberal”.
All resorts in our blog post about Nudism in Brazil are not liberal resorts, we can vouch for that.

Brazilians love taking pictures and take lots and lots of them. Especially selfies. We often thought that the reason why some are carrying two or three smartphones is just to make sure that they have enough memory to store all those photos.
While taking selfies at nudist places is still a bit taboo in the west, it appeared to be very accepted in Brazil. Of course, the worldwide nudist etiquette also applies in Brazil and photos of others without their consent should not be taken. But don’t be surprised to see lots of nudists posing naked for the camera at a Brazilian nude beach.
We found some amazing nudist places in Brazil and had some of the most memorable nude experiences. We’re sure that if you learn a couple of Portuguese words, remember not to go to liberal places and bring your tan lines, beers, kids and whatever pubic haircut, you’ll soon find yourself taking topless selfies before you bare it all and have an amazing Brazilian nude time!
Naturist Destinations ➡️ Brazil

8 thoughts on “8 Tips for going nude in Brazil”