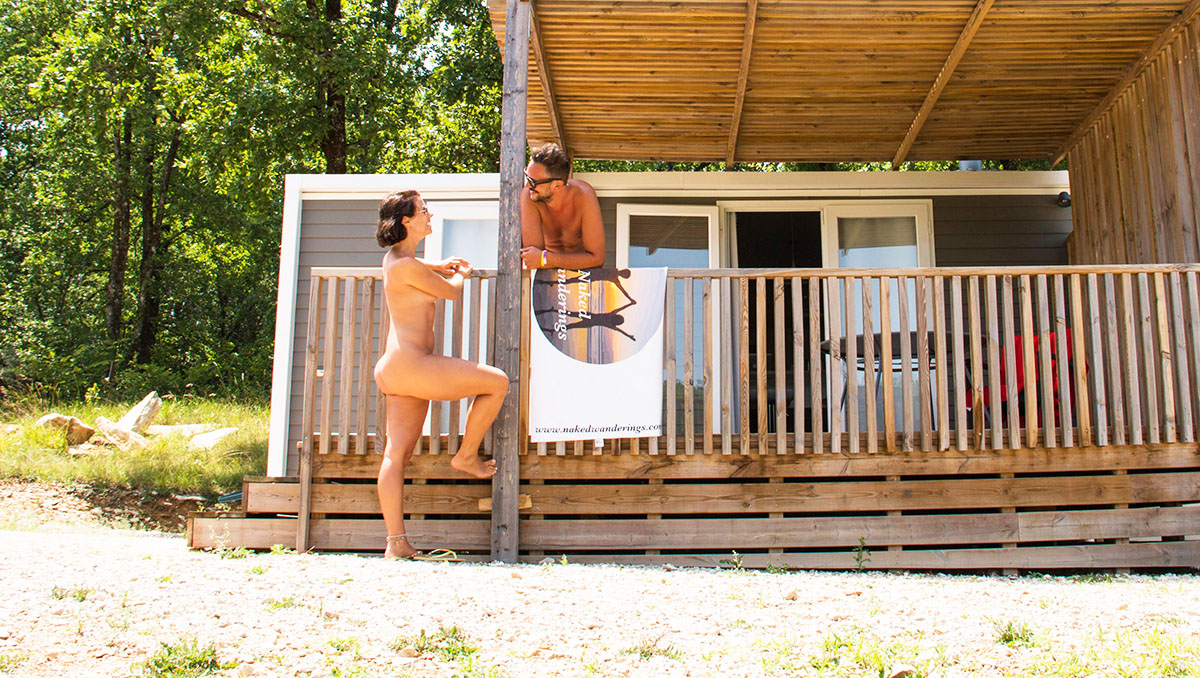 There are many reasons why people are reluctant to engage into nudism. We believe that the number one reason, with head and shoulders, is how even the idea of being nude makes them feel uncomfortable. Basically, it comes down to shame. And basically, many of the other reasons people come up with like jealousy, religion and modesty also come down to the same thing. We don’t really like how we look. We have all these little or big things we prefer to keep away from the eyes of the outside world.
Many people don’t see this as a life changing problem. We got used to dress to impress and hide our vulnerabilities with clothes and accessories. Or sometimes we use the most simple trick of them all: We turn off the lights. Several researches have shown that more than half of the people only have sex in the dark. Millions rarely or never see their partner in the nude at all. For us that’s quite unimaginable, but then again, it’s each their choice. However, when this has a negative foundation, like fear or shame, it’s something that could be important to overcome. Becoming comfortably nude might be a huge improvement for the rest of your life.
It also becomes an issue when your partner appears to be a nudist. When your nudity (or lack of it) becomes an important factor in your relationship. In the past we’ve written blog posts like Help! My Baby is a Nudist in which we explain what nudism is all about. Or How to Tell Your Significant Other where we talk about bringing the nudism subject on the table.
This post is different. This one is for those who struggle taking off their clothes. Among others or sometimes even when they are on their own.

Step 1: Start alone and face yourself

Nudist partners can be a bit pushy. And we’re certainly not just talking about men here. We’ve met several women around the world whose husband didn’t want to hear anything about nudism and who were trying to convince him. Anyway, every time you make a small step towards becoming comfortably nude, the last thing you want is a thumbs up, a pat on the back or a “good for you baby, good for you!”. So it’s better to take this first step all by yourself.
When was the last time you had a good look at your body? As in a real good look, not just a quick flash in the mirror while jumping from the shower into a towel. Now is a good time to do so. Get undressed, stand in front of the mirror and take the time to look at yourself.
We’re not going to set up some body confidence course in which we would ask you to do this twice a day and say something positive about yourself. Although these things certainly wouldn’t hurt. The main idea of this step is that when you want to become comfortable naked among others, you have to become comfortably naked in front of yourself first.

Chances are that this first step has not gained you much more confidence. It could well be that it was more like a slap in the face. You’ve just been confronted with what you’ve been trying to hide and ignore for many years. This has been just another confirmation that in reality you look nothing like the average person you see in magazines or on TV.
Please re-read that last sentence we just wrote. There’s one big mistake in it. Can you find it? It’s the word “average”. The bodies you’re so used to see in the magazines are not average. These are professional models. And not only that, in the large majority of the cases they are photoshopped as well. It’s time for a reality check.
The average height of an adult American female is about 5 feet and 4 inches (162.5 cm). Her weight is 166 pounds (75 kg). The average American male is about 5 feet 9 inches (175 cm) and weighs 195 pounds (88.5 kg). That doesn’t really sound like those magazine models, does it?
If you’d like to know the statistics about your own country, check here the average human weights and average human heights for your country.
There’s a lot more interesting data to be found online. For example that the average breast size in Europe is a B, in Asia it’s an A and in the USA it’s an F. The average penis size is about 3.5 inches (8.8 cm) when flaccid and 5.1 inches (12.9 cm) when erect. It’s estimated that 80% of all people have stretch marks. And we can keep going on like this for every part of your body you may feel insecure about.

Step 3: Learn to be nude

This may sound a bit weird, but being nude is something you actually have to learn. It’s a habit you’ve forgotten since about the day you turned three years old. Luckily, it’s much easier than learning how to get dressed. There are no sizes to remember, no models that may or may not suit you and no colour combinations. The only thing you have to learn is to understand that you actually look great naked.
When we walk on a textile beach, many times we think that a person would look so much better without clothes. This is not a sexual thought and neither are we talking about 21 year old super models. The very large majority of people just doesn’t look good in bathing suits.
Learning to be naked is something you can only do by practicing. Start walking around naked in the house now and then. Stop wearing a towel or putting on clothes when you walk from the bedroom to the shower to the toilet or to the kitchen for a midnight snack. Try some moves when you’re naked. Do some yoga poses or a happy dance. Try cleaning, chilling, reading, gardening, dish washing, whatever possible naked.

Step 4: Involve someone you trust

If you’re in a relationship and especially if you’ve been trying to be comfortably nude because your partner is a nudist as well, now is the time to announce what you’ve been doing when he or she was away. Forget the thumbs up, your new found progress will be greeted with awe and amazement.
It’s time to start doing things in the nude together. This might be the most fun step of all, so make sure to enjoy it to the fullest. Sunbathe in the garden together in the nude. Watch TV together in the nude. Clean the shower together in the nude. Have private nude dinner parties. Tell everyone you’re going away for the weekend but just stay two full days naked at home.
For singles this step might be more difficult because you’ll have to find a friend or family member who’s comfortably naked as well. If you don’t find someone like this, no worries. Then just forget about this step and move on to the next one.

Step 5: Getting naked among strangers

Many think that this is the hardest step, but we don’t really agree. If you’ve been through all four of the previous steps, this one won’t be much more than a next phase. It is a bit of a weird step though, that much is sure. Because when you think about it, how many people have seen you naked during your life? How many naked people have you seen? Chances are that one visit to the nude beach or nudist resort will double, triple, decuple or even centuple that amount.

It’s much less scary than it actually sounds. Because there are a couple of things you have to keep in mind:

✅ Although many others will look very body confident, they all had a first time nude experience too.

✅ Everyone is different, but when you look at the statistics of Step 2, they’ll all be average in a way.

✅ Most of the others have seen hundreds if not thousands of other naked people. There’s no way that they will think you look any worse or better than anyone they’ve seen before.

The most important part of this step is to find the right place your first time social nude experience. Check out our Complete Guide for the First Time Nudist for good tips and tricks.

Step 6: Test what you like to do in the nude

It’s a misunderstanding that all nudists want to do as much as possible naked. Some of them certainly do. But the large majority picks their spots and activities. This is one of the main reasons why some people who enjoy nude beaches or the naked spa are afraid to go to a naturist campsite or nudist club. Because they think that they will be expected to do things in the nude which they don’t really want to do.
Nude sports is a good example. It’s not because you’re comfortable spending an afternoon baking on the nude beach that you’ll suddenly also like a naked run or nude volleyball tournament. Nude yoga is another one. We also found our first nude yoga experience quite ehm… in our face. We definitely understand that for many nudists, nude yoga is one step too far.
Last week we’ve met a woman who has been a naturist for more than five years but still doesn’t like to go naked to the restaurant of the naturist campsite. And that’s perfectly fine. Take your time to see which activities you enjoy being nude and which you don’t. If you don’t like them because of body issues, you might want to push yourself a little and who knows you’ll gain even more body confidence. But if you just happen not to like them, don’t force yourself.
Each nudist place has different rules about when you’re supposed to be naked but at the large majority you definitely have some options for a comfortable nude experience.