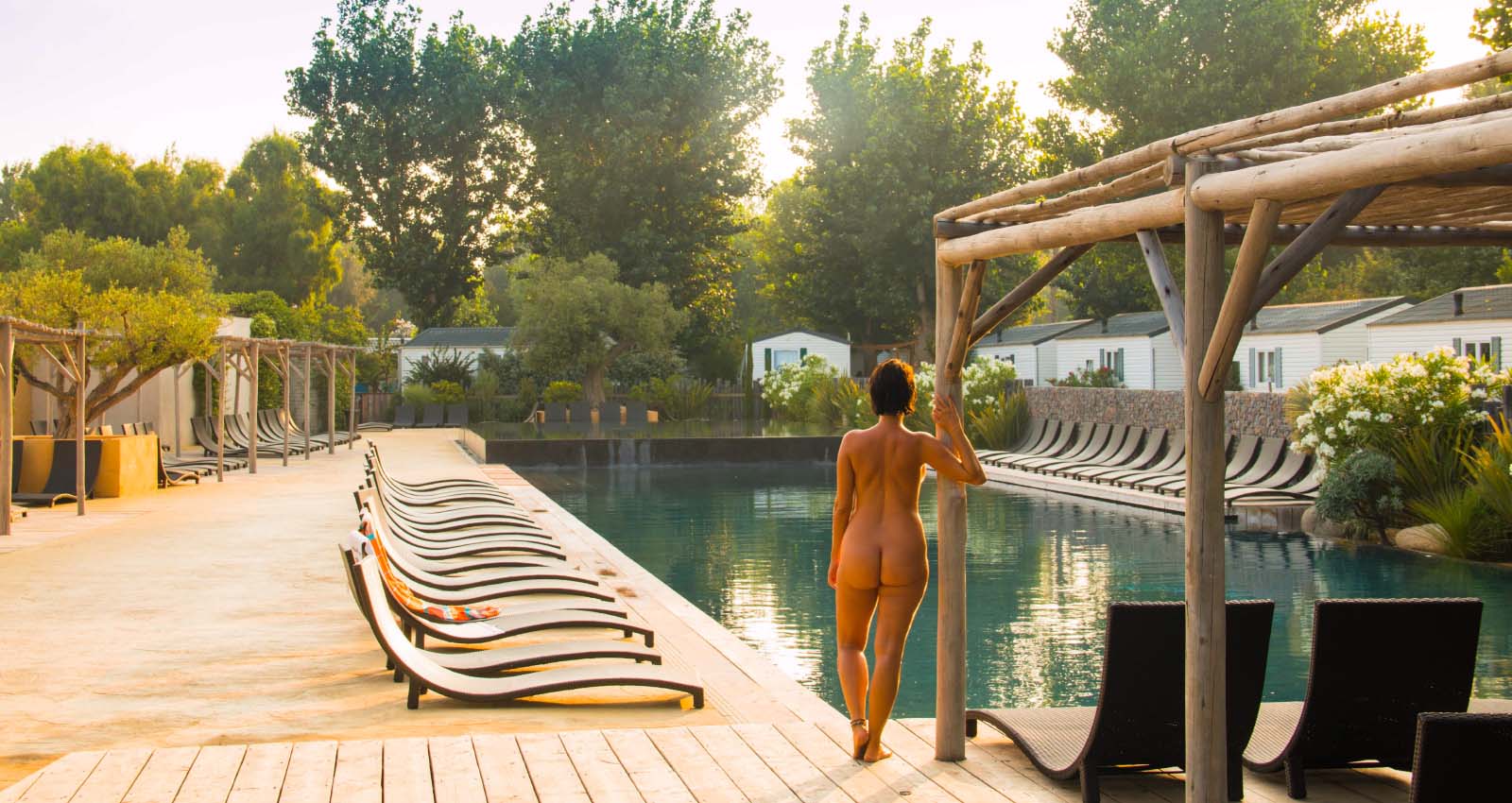 For many European naturists, including ourselves, a visit to the spa was the first experience of social nudity. This isn’t a coincidence. The step to try a nude spa is just a lot smaller than a visit to a naturist club or resort. While the latter encourage nudity, bathrobes and sarongs are embraced at the spa. Nudity is only obligatory inside the pool, the jacuzzi, and the other facilities. If you prefer some covering when walking from one spot to the other, that’s perfectly fine.
Spa centers typically receive a much wider range of guests than naturist venues. Because the focus is less on being naked and more on relaxation, many visitors of spa centers don’t call themselves naturists or nudists and feel little (yet) for exploring other nude options. For naturists, the spa is a welcome alternative when the temperatures drop and outdoor nudity isn’t very pleasant anymore.

What is a spa center?

When we explain the concept of the European spa center (also called wellness center, thermal baths, or even sauna), we often compare it to a water park, but for grown-ups. Instead of big slides and rapids, you will find pools, jacuzzis, saunas, hammams, and often a huge variety of massage services and treatments. Spa centers vary a lot in size. Some receive hundreds of visitors per day and take several hours to try all the facilities. Others prefer to keep it cozy with fewer facilities and guests.
In all spa centers, relaxation is the ultimate goal. A couple of hours or even days away from the outside world. A paradise of peace and quietness. Although many spas do allow children (if you can keep them quiet), you’ll find that most of the visitors will be adults.

Where can you enjoy a nude spa

As mentioned earlier, the nude spa is mostly a European thing. In fact, it’s only popular in a handful of European countries. Although we said that the spa has by definition little to do with naturism, it doesn’t seem like a coincidence that spa centers are especially popular in countries with a sprawling naturist community.

Being the birthplace of naturism and not particularly known as a country with year-round excellent weather, it’s not a surprise that Germany has a very popular spa culture. Because the Germans tend to be very open-minded towards nudity, spa and wellness centers in the country are by default nude obligatory and mixed. Unless otherwise stated.
One of the world’s most famous spa resort towns is Baden Baden in the north of the Black Forest. Because of the hot springs and thermal waters in the region, Baden Baden has been a magnet for spa aficionados since the 19th century. The options for spa vacations are plenty and for every budget. Top of the bill is the luxurious Brenners Park-Hotel & Spa.
Spa retreats are also very popular in the south of the country, especially in the region around Munich and the Bavarian Alps. Das Tegernsee resort at less than an hour’s drive from Munich is known for its excellent spa facilities but maybe even more for its amazing views.

Also in Austria, your birthday suit is the official dress code at the spa. Spa resorts are spread around the country and provide lots of indoor and outdoor facilities. Even during the coldest winter months, the outdoor pools and jacuzzis remain popular. What’s more relaxing than lounging in a hot pool while looking over the snowcapped mountains, right?
A top favorite is the Tauern Spa near Salzburg which covers more than 20 000 square meters and has both textile and nude areas. Other popular picks are the Narzissen Vital Resort, the Aqua Dome Therme, and the Falkensteiner Hotel & Spa Carinzia.

Nude spa in the Netherlands

According to a recent survey, 2 million Dutch have enjoyed social nudity before. The country definitely has its fair share of naturist clubs, campgrounds, and nude beaches, but many went full monty for the first time at one of the spas. Most spa centers in the Netherlands maintain a no-clothing policy, but some have bathing suit days. In those days, bathing suits are allowed and in some cases even mandatory.
Top spa resorts in the Netherlands include Fort Resort Beemster, which is set in a luxuriously renovated fortress, and Wellness Resort Elysium, one of the largest spa centers in Europe.

During the last decades, a relaxing spa and wellness day has also become a popular pastime of the Belgians. Both nude obligatory and bathing suit obligatory spa centers exist in Belgium, so it’s important to check this upfront if you prefer to spend your time clothes free. From our experience, the largest and nicest spa centers in Belgium are all obligatory nude.
The most popular spas in Belgium are Thermen Mineraal, Thermen Londerzeel, and Thermen Dilbeek. But there are several other great options.

Nude spa in the UK

It has always surprised us that, given the typical weather, the nude spa isn’t all that popular in the UK. The current uprise of naturism in the country will hopefully change that, as we’re pretty sure that there are many British who would also love to get naked on a rainy day. One very popular nude spa in the UK is Clover Spa in Birmingham.

While Germany, Austria, the Netherlands, and Belgium definitely provide the most variety of nude spa centers in Europe, also several eastern European countries maintain a spa culture and have embraced social nudity. Habits and local customs may differ from country to country or even place to place. So it’s always best to check upfront whether nudity is allowed and in which areas. If you’re visiting with your partner, you also want to check if the facilities are mixed gender.
In Poland, spa centers can be found in most large cities. Aquapark in Wroclaw is a huge textile water park for families but has a large nude spa section as well. Other popular choices are Cezar, which is part of a naturist domain, and Termy Krakowskie.
The Czech Republic has several spa resort towns, of which Mariánské Lázně and Karlovy Vary are the most popular. Aquapalace hotel in Prague has its own spa complex called Sauna World.
Another great spa resort town is Bešeňová in Slovakia, with its popular water park. There are several hotels inside the park, of which Hotel Galeria Thermal Bešeňová is especially popular among spa visitors. Other great choices in Slovakia are Aphrodite Palace and Thermia Palace Ensana.
Hungary has a long time spa culture as well and nudity is quite common. Many spa resorts in Hungary do have gender-separated facilities though. The wellness facilities of Bükfürdő Thermal & Spa are mixed.
The thermal waters and hot springs of Slovenia are yet another option for those looking for a spa getaway. It has to be mentioned though that the local etiquette dictates that nudity is common (and often obligatory) in the sauna and hammam. In other facilities, you may be required to wrap a towel around your body. Popular locations are Terme 3000 and Thermana Lasko

The concept of the spa center, with many different facilities, didn’t really become popular in the Nordic countries. What those countries do have, is a long-lasting sauna culture. Especially in Finland and Sweden, sweating it out in the sauna is a popular pastime. Saunas are also seen as a social place and often have space for up to 50 people. It’s very common to visit the sauna with friends, with the family, and with colleagues. It’s even said that some of the largest business deals are made among naked sweaty bodies.
In Finland, women and men go to the sauna separately whereas the saunas in Sweden are often mixed gender. In both countries, it’s considered an honor to be invited to the sauna and you better make up a good reason if you’re planning to decline the invitation.
Maybe the most idyllic spa in all of Europe is the Blue Lagoon in Iceland. Unfortunately, bathing suits are mandatory here. This is something we found pretty weird during our visit to Iceland because the Icelanders didn’t seem to have a particular aversion to nudity. In fact, most of the public swimming pools only have communal dressing rooms. So it’s perfectly fine being naked among each other while dressing/undressing and while taking a shower, but to enjoy the baths you’ll need a bathing suit.
Even though some textile is mandatory, The Blue Lagoon is definitely a recommendation. It can easily be visited from the capital Reykjavik or for the ultimate experience, you can stay at The Blue Lagoon Retreat right inside the domain. And who knows, maybe they’ll drop their clothing policy one day and allow us to drop our clothes as well.

29 thoughts on “European Countries with a Nude Spa Culture”