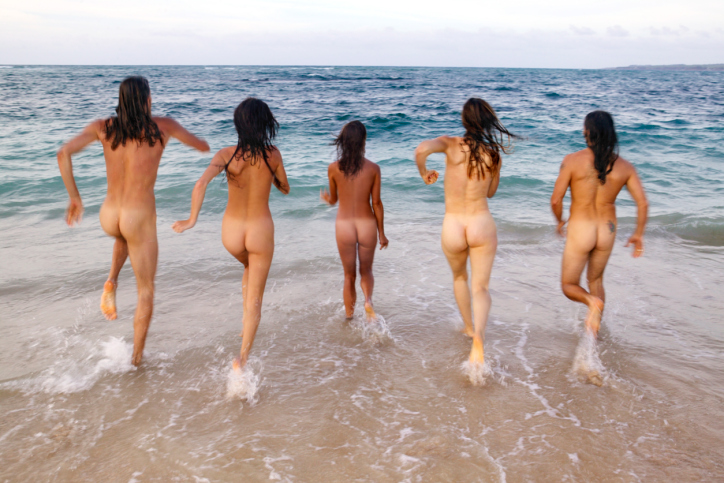 In some of the first articles on this website we told you how our first nudist experience and how we accidentally went to a nudist campging. This is pretty much how we rolled into it. At the time we didn’t ask ourselves too many questions about this. It was what it was, we had found an alternative lifestyle, a nude lifestyle, and we enjoyed it. Only later, after talking to several other nudists and after reading about it on the web, it occurred to us that we were actually pretty lucky because we were born in a country where nudism is quite accepted and because we both stepped into it together. We hear so many stories where one partner really had to convince the other to give nudism a try, sometimes resulting in a life long nudist couple but other times the answer would remain a plain “No” and so there was one more closet nudist. Or worse.

Many reasons to become a nudist

In several other articles we’ve tried to give you some reasons to engage into nudism. 7 Reasons to become a nudist is such an example, but also in Undress to destress or Improve your body acceptance by going nude we’ve been talking a lot about the advantages of being a nudist.
All of the philosophies which you can find in above articles are not ours alone of course. But because we strongly believe in them, we’ve brought them to you in our own words.
Sometimes, however, a smart mouth will ask us: “Yeah, yeah, we know about the feeling of freedom and the equality and the lack of tan lines and stuff like that, but tell me, why did YOU decide to be nudists?”
And they don’t want to hear the stories about how we accidentally rolled into it, they want to know why we stuck to it, why we got interested in nudism, to such an extend that we even started blogging about our naked lifestyle. 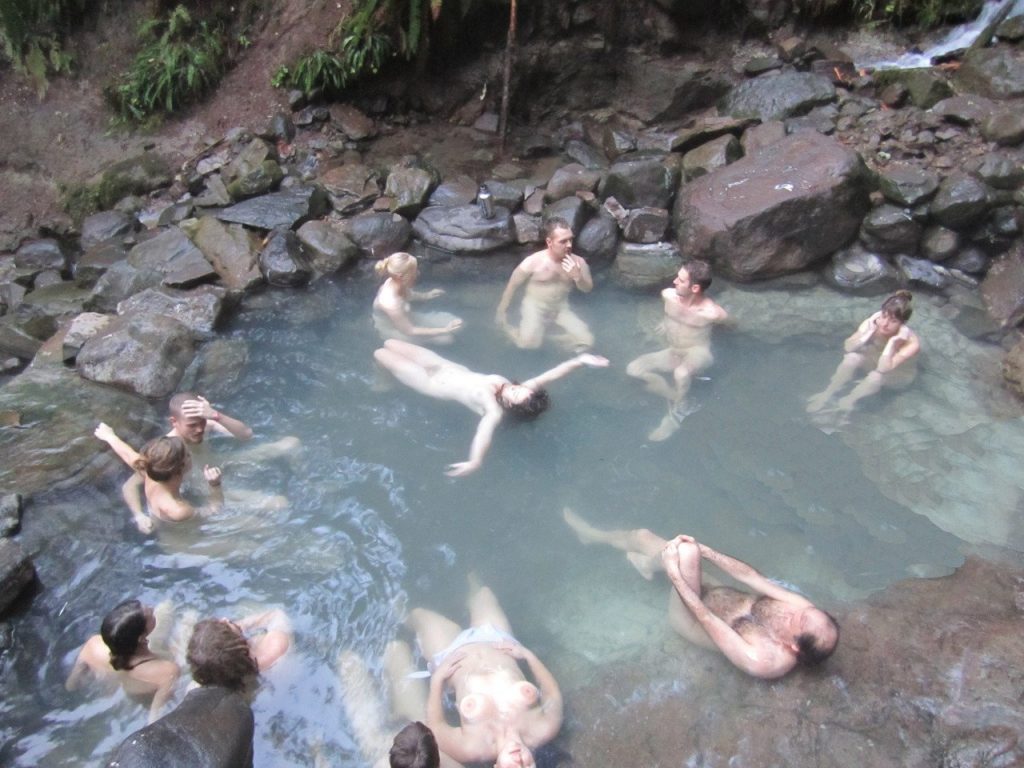 Our story begins in a small town

We were both born in middle class families in small town Belgium. (no, we’re not going to bore you with all details of our life, this is just an introduction, please sit through it). We had loving parents, went to decent schools, got to study, found good jobs and soon afterwards we met each other and fell in love.
All of our friends and family could easily see how this story would proceed, soon we would buy a house, get married, have children, pay a lot of taxes and live the standard life. But somehow that’s where it went “wrong”…
We like to think that what attracted us to each other was that we didn’t share the same idea of life as the others. We didn’t want the life that everyone else has, we wanted to get something more out of life, or at least die trying.
That’s about the time when we stumbled into nudism, which must have been around 2010. Now the question is whether the reason why we were open to nudism, which is even though we live in Europe still not the most common thing to do (“Hi mom, I didn’t like tennis anymore so I decided to give nudism a try” said no one ever), was because we were looking for something different or did we start thinking about a different lifestyle because we experienced nudism? We don’t know. Both things happened around the same time so it could be either one.

In any case, our minds changed, our visions broadened, we felt an unstoppable urge to get out of our comfort zone and nudism seemed to be what satisfied this urge. We were don’t something else which (at least from what we knew) most of our friends didn’t do. We lived a part of our life naked. NAKED. Can you imagine? In this clothed world where people spend amazing amounts of money on clothes, we decided to spend time in the nude.
Because, even though many nudists swear that there’s nothing more normal than the naked body, the first couple of times you go nude among others your blood starts pumping and your brain goes overtime. Your whole life people have been telling you that your body is some kind of sacred temple, only to be seen by your lover and maybe your closest relatives. And there you are, exposing your own body and the one of your partner to complete strangers and meanwhile seeing tens or hundreds (or if you happen to be in Cap d’Agde thousands) of naked bodies yourself. One can’t deny that it does something strange with the mind. Certainly at first. 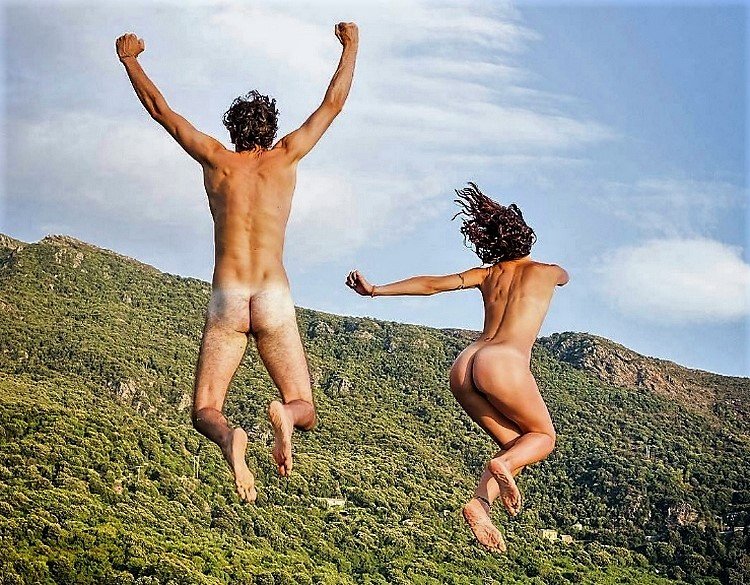 Learning the values of life

It was about the same time that we started traveling. At first because we read about backpacking and it sounded like a cool thing to do when you’re young and don’t have children. Soon came a second trip and a third one, long story short, at the end of 2012 we left our family, our friends and our homeland behind and got a one way ticket to Argentina. Only to return after a year.
During those trips we met so many great people from all over the world that we started questioning our own beliefs. Back home we were used to value people based on several superficial ideas: which country they’re from, which religion they believe in, the colour of their skin or how much money they earn. Those things are said to build your identity, but only to a certain point. When you think about it, what does “country” even mean? Borders are just the results of a war between two or more power-hungry individuals long time ago. To us, it didn’t mean a thing.

The values of nudism

Nudists basically share the same ideas. Of course they don’t all think the same as we do (boy, that would be boring) but they share an open mind. Yes, there can be real patriots, yes, there can be devout Christians, yes, there can be billion worth CEOs among them, but they won’t value you differently because you are not the same and look through those superficial prejudices. They will share their ideas and be open to yours, which is the source for great conversations. 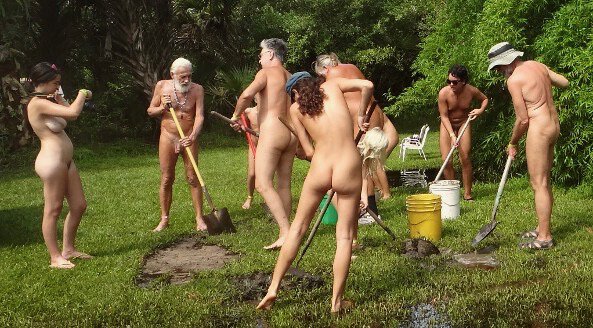 If you want to live a life with your eyes open you have to step out of your comfort zone. You have to forget everything that has been narrowing your mind for the last twenty, thirty, forty years and start seeing things with a new perspective. But in our society these ideas often lead to loneliness. Among nudists you won’t be lonely. There are millions of nudists around the world who share the same ideas, who’ll appreciate you for who you are and not for how you look, who enjoy the feeling of the sun on their skin and the grass between their toes, who got out of their comfort zone to live a life more complete.
And, of course, you do get an amazing tan!
Picture credit: The photos in this post are coming from Google and Twitter. If you find one of yourself and you don’t want it to be on our blog, let us know and we’ll remove it.

15 thoughts on “Why we chose to be nudists”