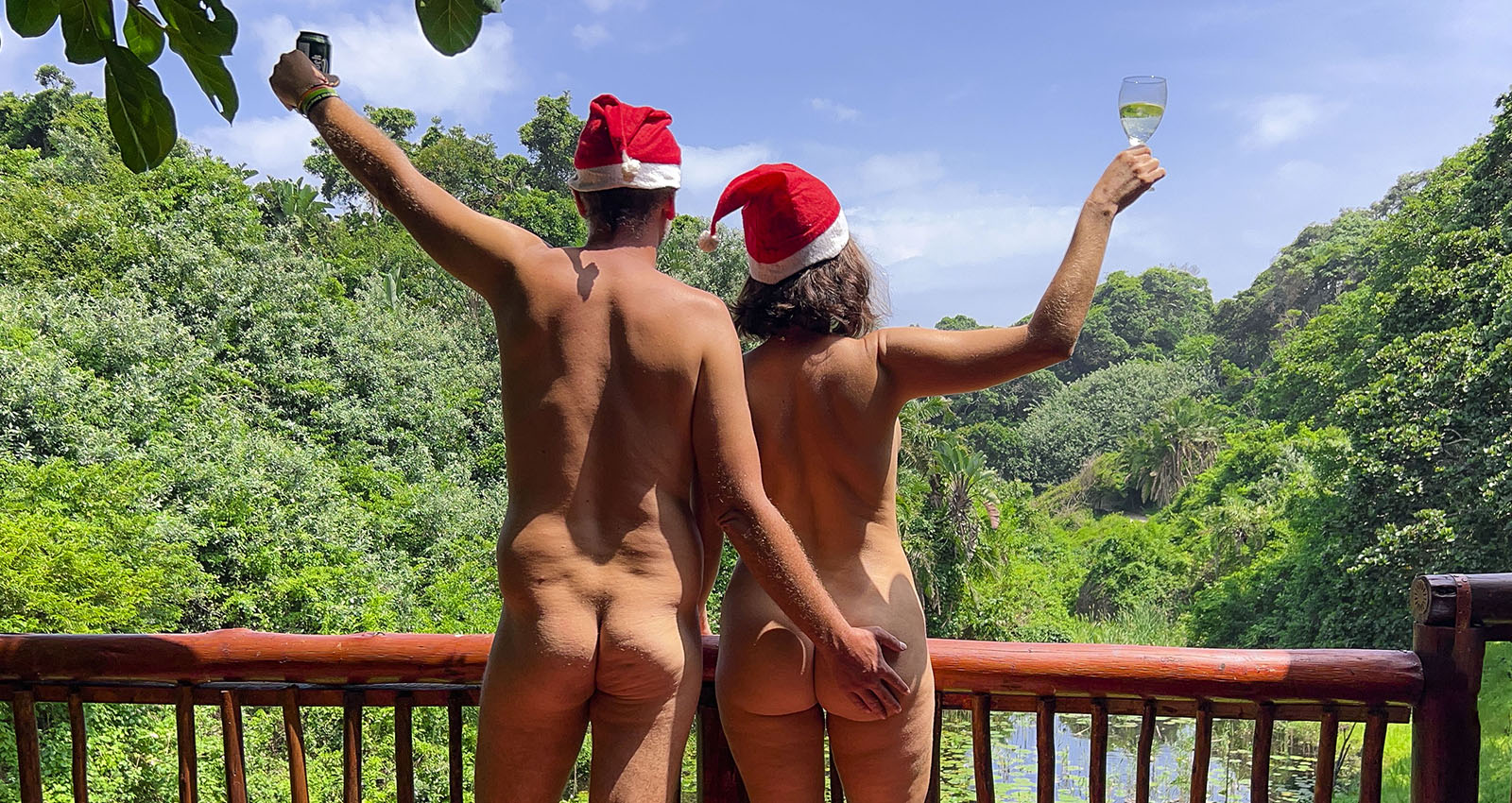 Welcome to the 6th New Year’s blog post that is appearing on this website. Who would have guessed this when we wrote the first one back in 2017? At the time, we were just two backpackers who had started a simple website to share our opinions about naturism and our experiences at the naturist places that we visited. We had planned to do this for a year or maybe two until we ran out of money and had to return to our office jobs again.
Who would have guessed that in 2023 we would still be on the road? Who would have guessed that we would be writing another New Year’s blog post from a terrace with a mountain view in South Africa? We definitely did not, and yet here we are. So many things have happened during those years, good things and less good things. Ups and downs are part of life and it makes no difference whether you’re an accountant, a doctor, or a naturist travel blogger. But this year has been one with very highs and very lows for us.

When travel was finally back

Nothing has played with our minds and moods as much as COVID. It made us realise that we should not take travelling freely around the world for granted, it pulled our budgets into a deep red zone, but it also gave us lots of inspiration for new projects. It’s quite fair to say that without COVID, we would not be making YouTube videos today.
Every summer, the pandemic seemed to be at its end, the world opened up again, and we made lots of plans. Just to see them evaporate again during the winter months when closed borders and lockdowns found their way back into our lives. The first months of 2022 were different though. Suddenly the pandemic seemed under control and there were no new travel restrictions. We were ready to roll… quite literally.

While bars and restaurants were closed and the outside world seemed a very dangerous place, we spent a lot of time on YouTube. We were learning to make videos and looked for inspiration wherever we could find it. We followed numerous travel vloggers and got hooked on the Van Life vlogs. Freedom has always been very important to us, and living in a moveable home just seemed to be the ultimate liberating experience (after naturism, of course).
So as soon as we knew that travel was not going away again any time soon, we rented a van in the Canary islands. What an experience was that! We just parked on the beaches for the night, we showered outside under a hose, and there was no more packing and unpacking because our home and our transportation were the exact same thing. We also learned that living in a very small space is not as romantic as it seems, especially on a cold day. We had to live with a minimum of stuff and had to become quite inventive. But it was a blast, and “buy a van” became a bucket list item.

After being stuck in Europe for more than 2 years, we could not wait to get on a plane and cross another ocean again. The choice of where to go actually came to us when we were invited to the international congress of Latin American naturists. You can’t imagine how good it felt to be back in Colombia. Partially because we’d already fallen in love with the country years ago, but also because finally, it felt as if the world was at our feet again. Nobody was going to stop us now, we were really travelling again.
There isn’t really a lot of naturism in Colombia and other than during the congress and a re-visit to the country’s only nude beach we had to keep our clothes on. But that didn’t matter. We had our backpacks on our backs and discovered colonial towns, high mountains and colourful deserts. Maybe it’s because we’ve already been to Colombia several times, or because we were enjoying the high of travelling a bit too much, but somehow we let our guard down. And that’s when things tend to get nasty. During one of our last days in the country, we walked back home after dark and ran into two masked guys with knives. Seconds later we had less money and fewer iPhones.

And then it got really bad

It’s hard to explain the shock of being in an armed robbery. We felt stupid, we felt scared, but we also realised that we were lucky. In the end, everything we lost was replaceable. But it felt like the worst thing that could ever happen to us. If only that were true. We returned to Belgium because Lins’ dad had to undergo surgery. A standard procedure with little risk. Nevertheless, it did go wrong and several weeks later he was gone.
For the first time ever, we didn’t feel like travelling anymore. It was the last thing we wanted. We just wanted to be close to our family. They say that all wounds heal over time, but we can tell you that not much had healed when we did decide to hit the road once again. It was rather that we came to the realisation that travelling is our life. We are not made to be stuck in one place. If we wanted to get better mentally, we had to start moving again. So we went to our safe place: France.

During the COVID years, we’ve spent every summer in France. It’s just such an easy country for naturist travellers. The naturist resorts and nude beaches are abundant. You don’t need aeroplanes to get from one place to another and even if they would close down the province borders, there are still enough naturist things to do in the province where you happened to end up. Except for a “hard lockdown”, not much could stop us from creating naturist content in France. And since it’s a neighbouring country of Belgium, we would never be more than 10 hours away from home in case we would have/want to return.
For three months, we made a big trip that took us to the very south of France as well as to the island of Corsica and we probably didn’t spend more than a day or two at non-naturist places. This summer was the first time when we felt the effect of being naked in nature so strongly. Maybe it’s also because we came from such a dark place, or because we were finally doing again what we like to do most, but we started smiling more often.

We even started making long-term plans again. With all the travel restrictions coming and going during the last years, we just travelled wherever the wind took us (read: where it was sunny and where there wasn’t a lockdown going on). Now it was time to take travelling seriously again. We wanted to go everywhere. And that became the new plan.
We don’t like to rush through places, so we gave ourselves 18 months to try naturism on every continent in the world (except for Antarctica). As winter was fast approaching in the northern hemisphere, we figured that we needed to start somewhere very much down south. South Africa had been on our bucket list for a while, so this was the perfect timing. And that is how we ended up writing this New Year’s blog post from a terrace with a mountain view in South Africa.

The big plan has just gotten started and if all goes well, you’ll find us popping up on most other continents during 2023. If all goes well because if there’s one very hard lesson we’ve learned the last year is that we shouldn’t take things for granted. There are many things that we can’t control, many changes that we need to accept whether we like it or not.
For us, 2022 has been a year of extreme highs and lows. Of great happiness and sadness. That is how life works, and we’re grateful that we’ve found the strength to see the forest for the trees again. And that is what we like to wish for you as well. The strength to cope with whatever is going wrong with your life and to keep remembering that after rain always comes sunshine. We hope that you have a healthy year ahead of you and that you get the chance to do the things that you love with the people that you love. Because that’s what life is really about. Oh yeah, and that you can do those things naked, because life is better without clothes!
Happy 2023 Everybody!

6 thoughts on “The year of big ups and downs”