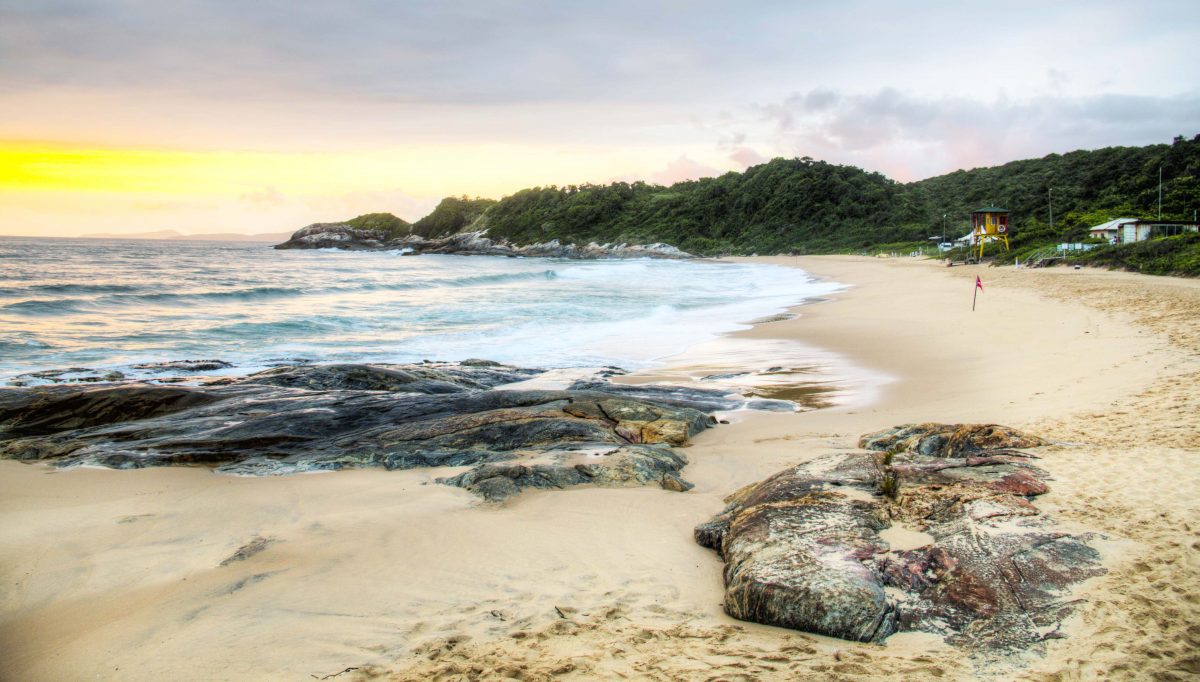 Praia do Pinho in Brazil’s Santa Catarina state at somewhat 80 kilometers north of Florianópolis is a huge milestone for naturism in Brazil. It’s often considered Brazil’s first naturist beach (although opinions tend to differ), where social nudity was practiced before it was even legal in the country. The first naturists were spotted at Praia do Pinho in the early eighties.
By 1986 a local naturist association AAPP (Friends of Praia do Pinho) was founded by several visitors among whom Celso Rossi. A name that might sound familiar if you’ve read our review of Colina do Sol as well. AAPP was the first naturist association in Brazil and from it grew two years later Brazil’s national naturist federation FBrN. So we think it’s fair to say that Praia do Pinho has been the spark for the development of countrywide naturism.
We couldn’t wait to drop our clothes in such a historically important place. 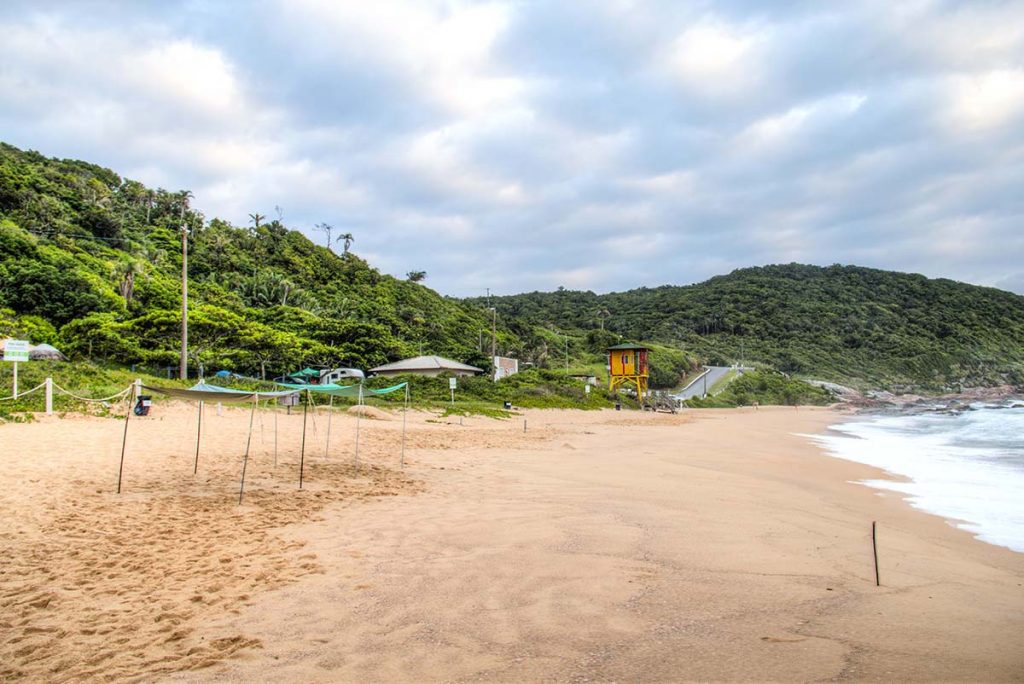 Praia do Pinho is one of the few city beaches of Balneário Camboriú. A famous vacation destination for many Brazilians from Santa Catarina or the nearby states. One of the first things which surprised us was the proximity to the city and how easy it was to get there. From Balneário Camboriú you can take the city bus 106 which has a stop right at the entrance of Praia do Pinho.
The nearest international airport is Hercílio Luz in Florianopolis which has connections to Argentina, Chile, Paraguay, and many destinations within Brazil. Coming from other countries it’s best to fly to Rio de Janeiro or São Paulo and get a connecting flight to Florianopolis from there.
The easiest way to get from the airport to Praia do Pinho is by Uber. The ride should cost you something around 35-45 USD one way. The coastal road is very pretty and if you like to explore more of the region it’s certainly interesting to rent a car at the airport. For us, RentalCars.com had the best deals for Florianopolis.
In case of a self-drive, just follow the BR-101 from Florianopolis direction north and get off in Ilhota to take the coastal road that passes the beaches. Praia do Pinho has a huge sign, you can’t miss it.
The cheapest way to get to Praia do Pinho is by bus. There are several direct buses leaving the bus station in downtown Florianopolis to Balneário Camboriú. From outside the bus station of Balneário Camboriú you can take city bus 106 which will drop you off at Praia do Pinho.
For more info about finding the best airline deals, bus tickets, and car rentals, check out our Resources page. 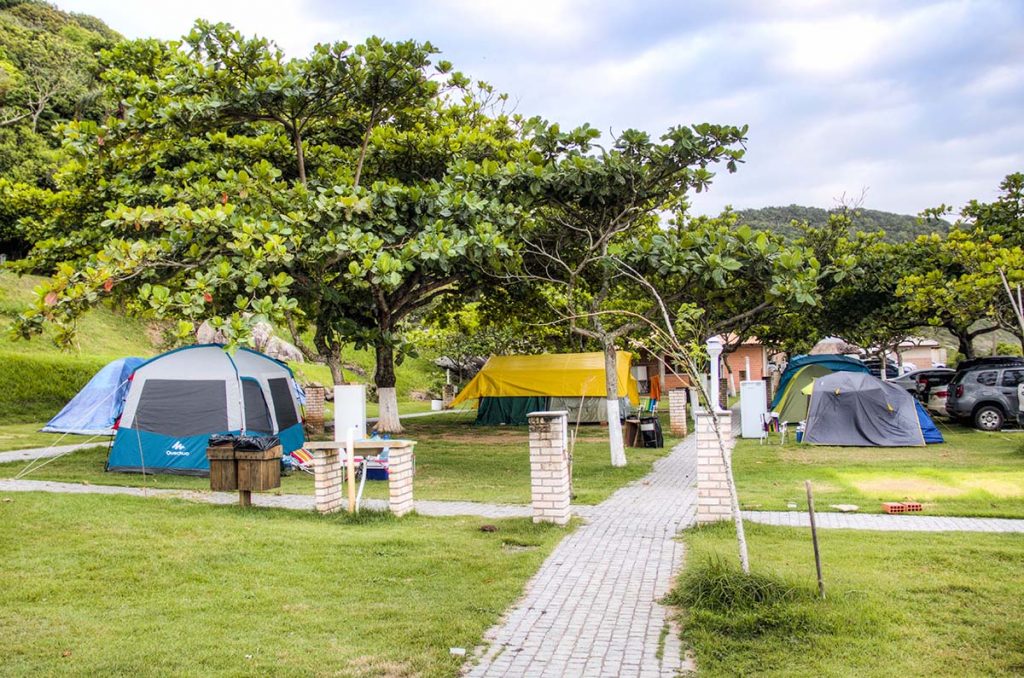 The goal of the AAPP (Friends of Praia do Pinho association) was to have a dedicated coastal area where naturists from all over Brazil could enjoy social nudity. Of course, these people had to stay somewhere.
What started as just a camping area has now grown to a 200 pitches large campground with all the necessary facilities. For most visitors of Praia do Pinho, camping is still the most preferred accommodation.
For those like ourselves who don’t travel with a tent, there’s the pousada which has 4 different types of rooms with different facilities depending on your budget. We had the chance to stay in one of the luxury apartments which have their own bathroom, air conditioning, TV, fridge, and ocean view.
For a campground feeling but with more luxury, you could also opt for the Chalet which is located on the campground but has a real bed, bathroom, TV, and air conditioning. 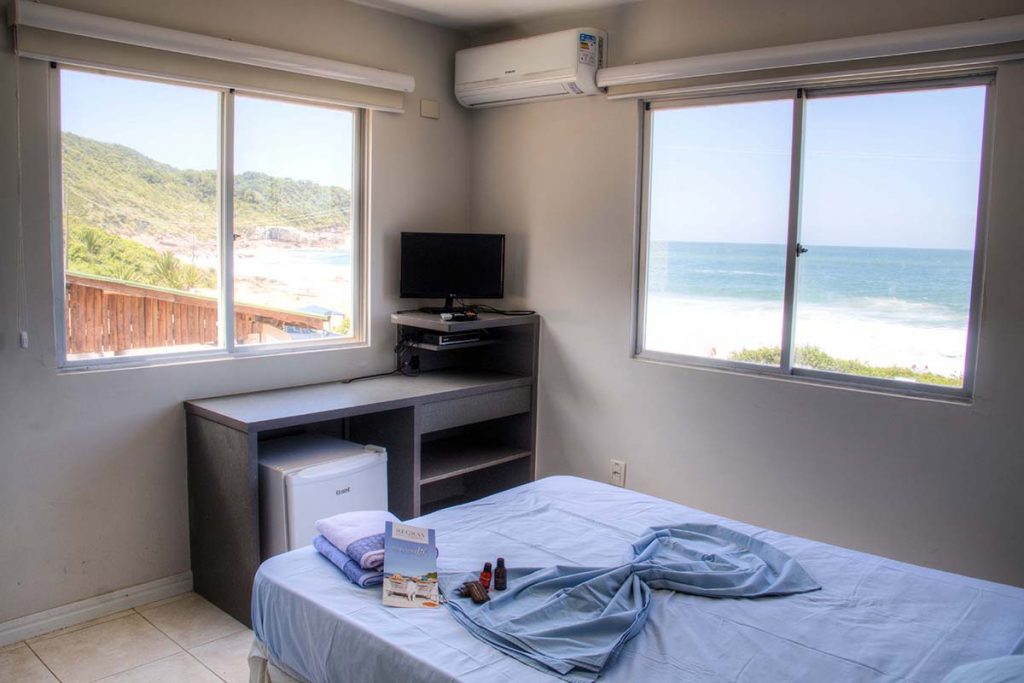 The number one reason why people visit Praia do Pinho is of course its magnificent nude beach. A 500-meter strip of white sand and emerald-colored ocean where most of the visitors spend their days in the nude. On this beach nudity is mandatory. Umbrellas and beach chairs can be rented for about 10 USD per day.
All other parts of the property are clothing optional. There are two restaurants/bars, one right on the beach at the side of the campground and the other one near the parking lot. Both serve food and drinks on the beach. The campground restaurant serves different types of seafood which we found rather expensive for Brazil, the other restaurant focuses more on fast food (they do serve some of the best Xis we’ve ever had).
Facilities on the campground include two communal shower blocks, a communal kitchen, and 220V electricity. Wifi is available for about 5 USD per day. 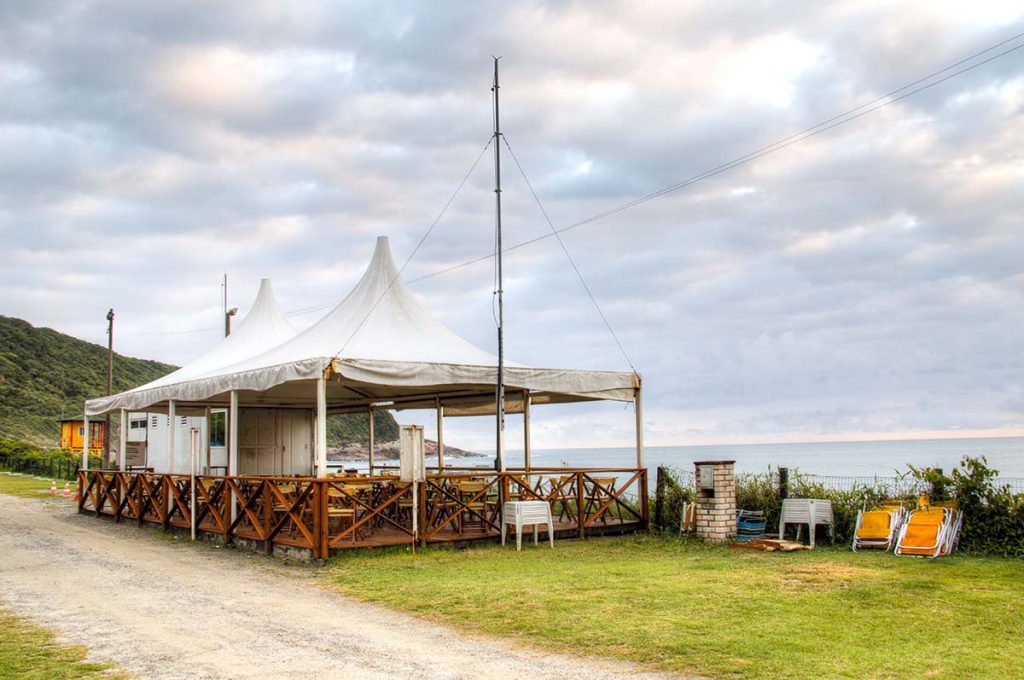 The beaches around Balneário Camboriú are purely magnificent but unfortunately, Praia do Pinho is the only one where you don’t have to worry about clothes. If you don’t mind wearing a bathing suit for a day, Taquara beach and Praia do Estaleiro can be reached by a (steep) half-hour walk and both have several options for lunch and dinner. And of course, you can take the coastal bus to visit some of the other beaches too.
The mountain cable car between the city and Morro da Aguada is a favorite activity for visitors to the region and gives spectacular views over the beaches and the city.
Balneário Camboriú is also a great place for shopping or dining out.
Further away but certainly possible on a day trip are Florianopolis and the wonderful Ilha de Santa Catarina which has its own clothing-optional beach called Praia da Galheta. But be careful, while we were there, about 85% of the others decided to go for the clothed option…
West of Balneário Camboriú is another interesting place to visit for a day, called Blumenau. A German city surrounded by Brazilian jungle. For the complete experience, make sure to visit during Oktoberfest or Sommerfest when you can watch Brazilians dressed up in lederhosen dancing to German folk music. We have to admit, it’s pretty weird. Luckily there’s lots of beer. 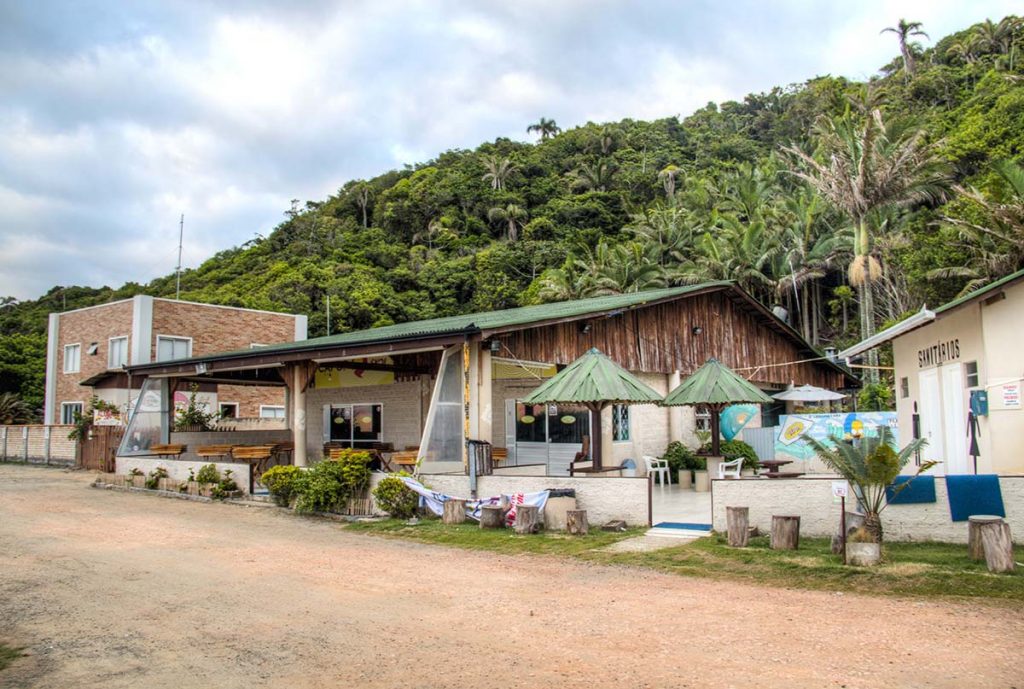 Praia do Pinho is known for its professionalism and that comes a lot on the staff. These people are running a business and making sure that their visitors have an optimal stay. From the receptionists to the bartenders to the lifeguards, they treat everyone in a respectful and comfortable way and make sure that the rules are followed. On our first morning, we were out taking pictures around 7 am while the beach was still empty but it didn’t take long before someone from the staff came over to mention that taking photos is forbidden on the property. Knowing that they’re so closely taking care of Praia do Pinho does provide a comfortable environment for the guests. 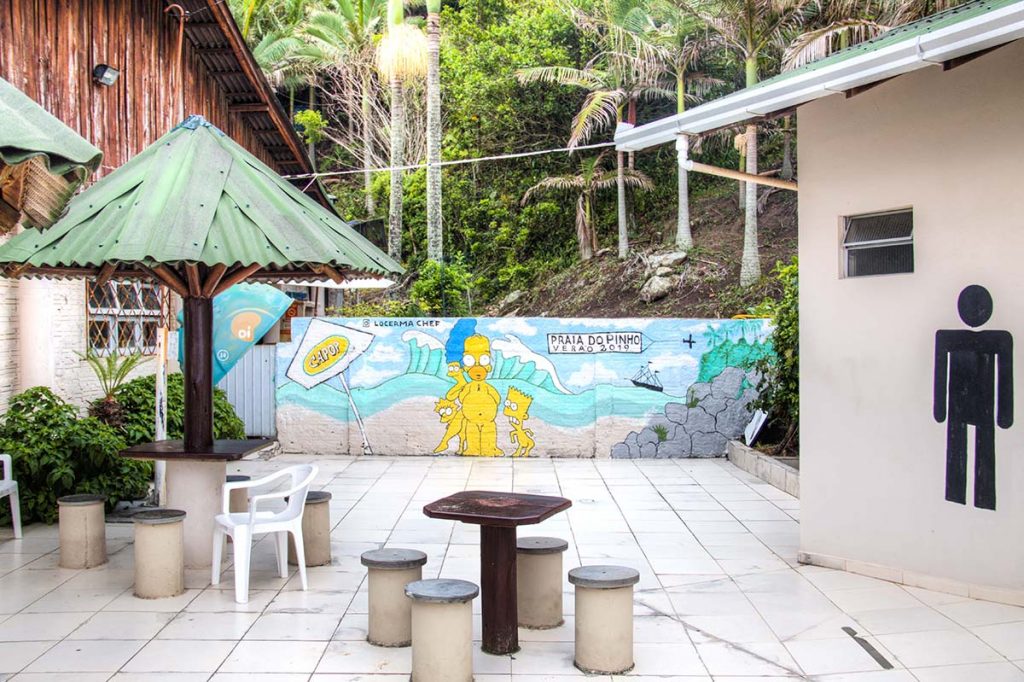 Just like at Colina do Sol, we were surprised about the variety in age, gender, shapes, and colors of the naturists. We do hope that this is something we’ll notice in all of Brazil. Another thing that surprised us was the number of visitors. Because we were there from Monday to Thursday we hadn’t expected so many other naturists enjoying the nude beach. Many were staying at the campground or the pousada but we also noticed quite a lot of day visitors, either staying in the city or living nearby.
Most of the guests come from within Brazil or from Argentina.
While we were at Praia do Pinho the majority of the guests were couples or small groups of friends. Of course, the timing could have something to do with it, children have to go to school during the week. 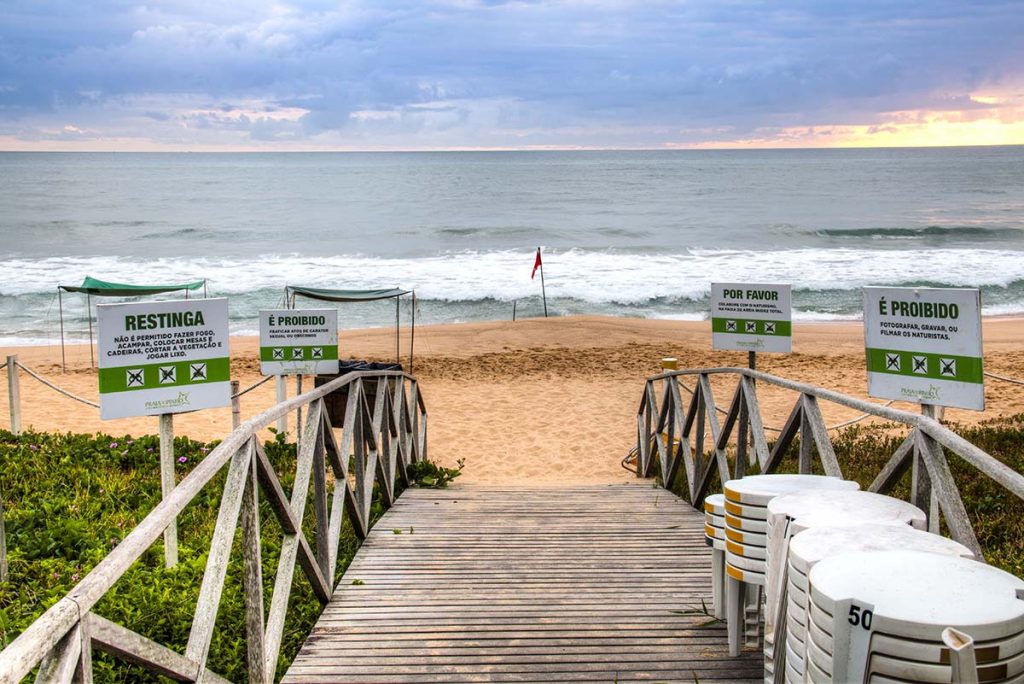 If you’re looking for a great nude beach vacation in southern Brazil, you should already be booking a spot at Praia do Pinho. Its wonderful beach and relaxed atmosphere will certainly give you a great time.
Read more about Praia do Pinho on  NUDE
More info: http://praiadopinho.com.br
More photos: On our Facebook
Disclaimer: We have been invited as guests of Praia do Pinho, but of course all opinions are our own. We are super confident you will love this place as much as we did!
Naturist Destinations ➡️ Brazil