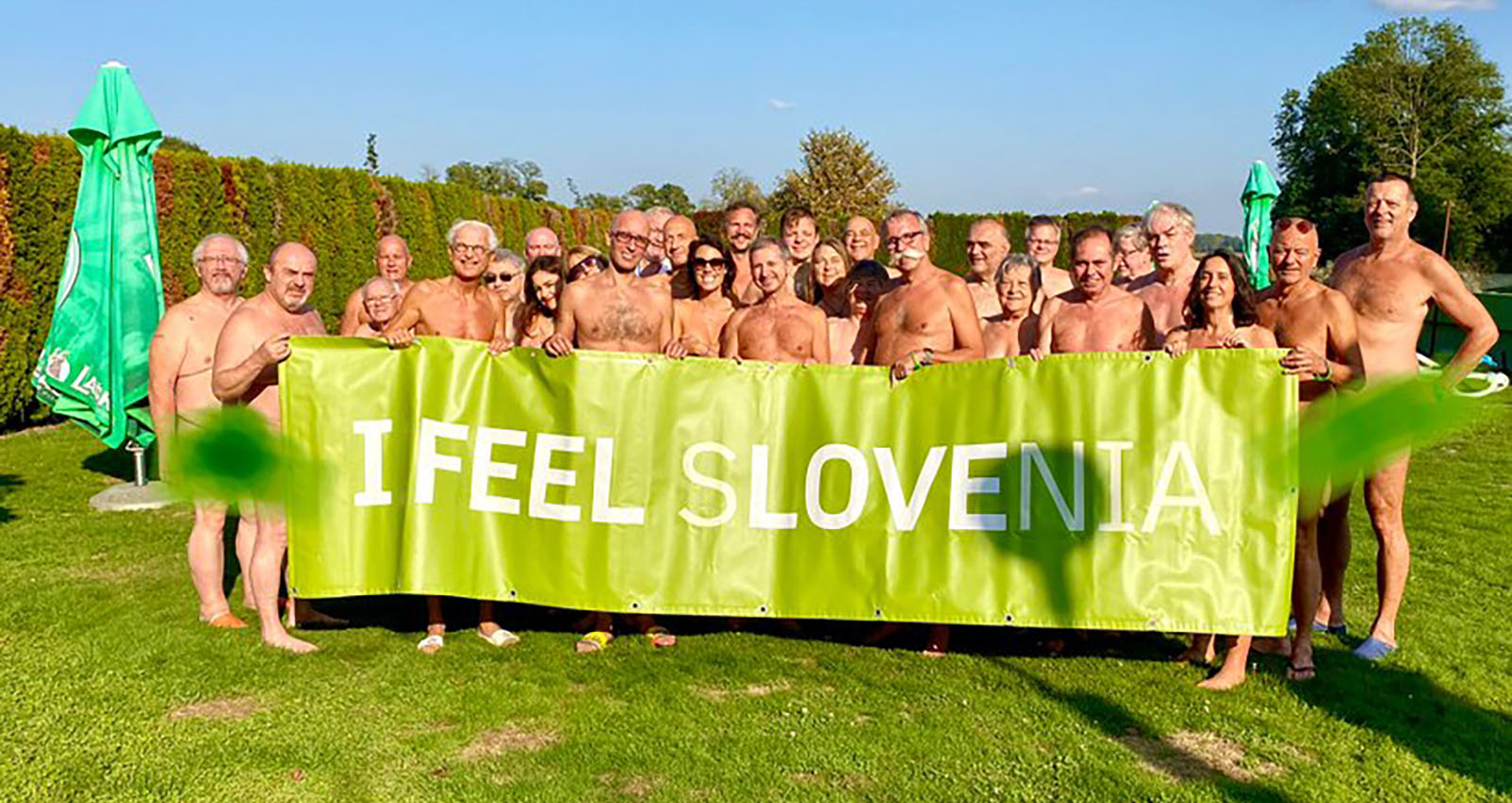 Back in 2018, we attended the World Congress of the International Naturist Federation (INF) for the first time. We had little to no idea about how organized naturism works, but we figured that this was the event that we had to attend if we wanted to be inspired. It turned out to be quite a disappointment. Instead of hearing about great plans and visions to make the world more naturist-friendly, we mostly spent our time listening to political debates, bureaucratic discussions, and several fights. Tears were more common than smiles. This was not what we had imagined at all.
Yet, in October 2021, we boarded a flight to Slovenia to attend the next World Congress of the INF… 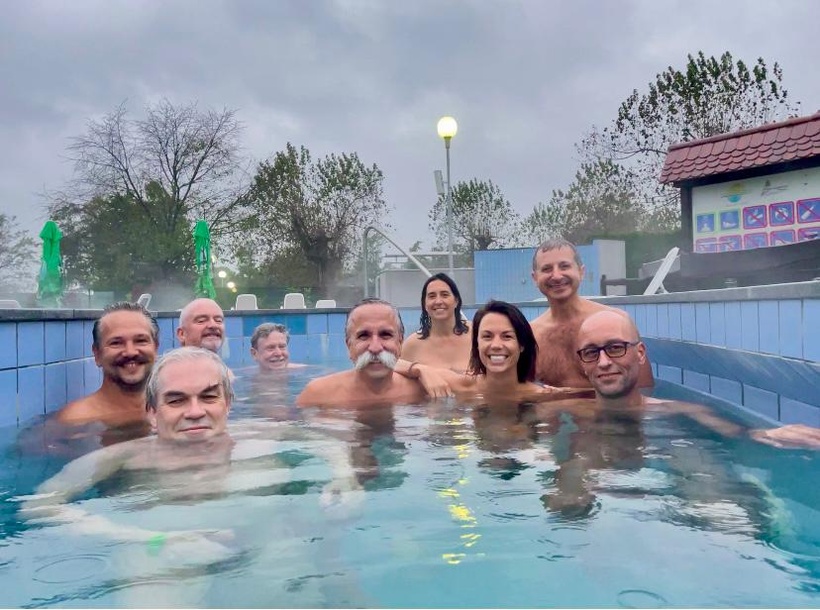 Why did we go back?

What had upset us the most in 2018 was maybe not that things weren’t exactly going the way we had wished them to go, but mostly that it didn’t seem like this would change anytime soon. Instead of looking for ways to bring the INF (finally) into the 21st century, it seemed like they were doing everything in their power to keep things the way they have been the many decades before.
This year, we finally had hope for change as a new candidate for the president position had appeared seemingly out of nowhere. Stéphane Deschênes is not just the owner of Bare Oaks Family Naturist Park in Toronto, Canada. If you’re following what happens in naturism on social media, it’s quite unlikely that you’ve never seen his name pass by. He has his own Naturist Living Show podcast and sticks his mustache in everything that has to do with naturism. Especially if it’s something new or modern. To give you an example, when Naked Wanderings was not more than 6 months old and still very unknown, Stéphane had already found us and asked when we would be coming to Canada.
For us personally, Stéphane Deschênes was the person who we wanted to lead the INF. And we were not alone. Many naturist federations agreed that change was urgently needed and that Stéphane would be the right person for that. Especially non-European naturist federations. Unfortunately, many of these federations were not able to attend the congress due to the ongoing COVID travel restrictions. As we were already planning to visit the congress and watch from the sidelines, we figured that we could as well give those non-European federations a voice and a vote. Long story short, we were sent to the congress as delegates for the South African Naturist Federation (Lins) and the Australian Naturist Federation (Nick). 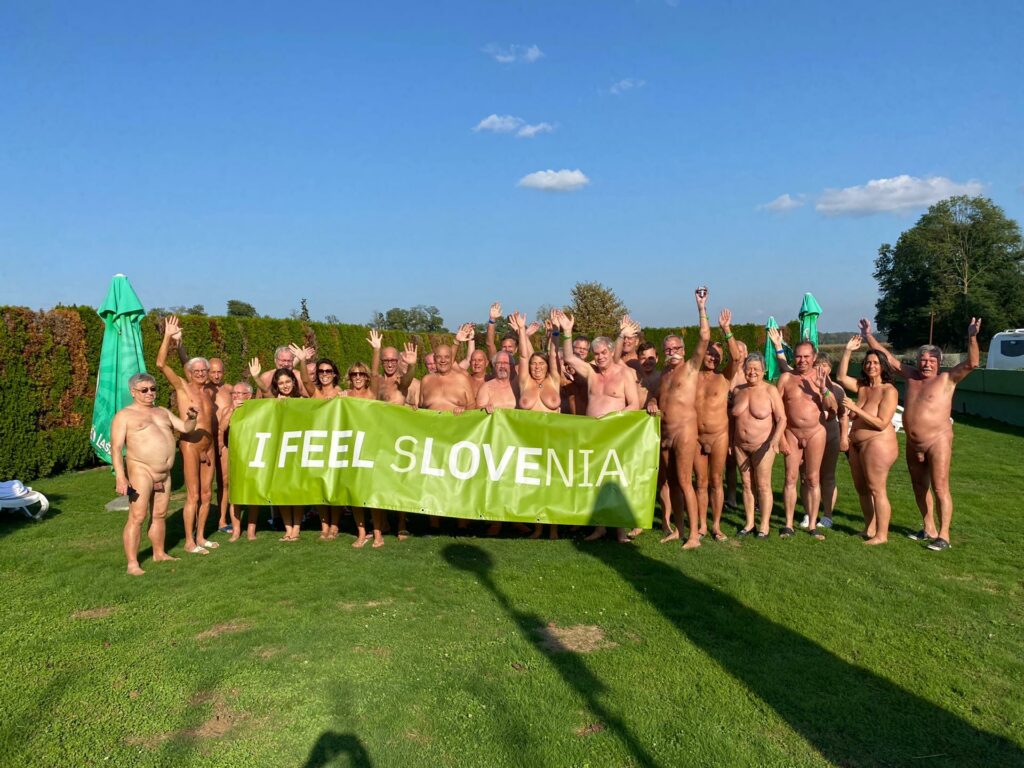 What is the INF board?

Just like every organization, the INF has a board. This consists of a president, a secretary, a treasurer, an assessor for European countries, and an assessor for non-European countries. In recent years, two more board functions were added: Protector of Naturism and Social Media Manager. Each board member is elected for a 4-year term.
This board doesn’t have (or isn’t supposed to have) all that much power though because the real driving forces behind the INF are the naturist federations. The federations pay for the memberships and get to vote on possible changes, ideas, improvements, etc within the INF. This brings us to the INF World Congress.

What is the INF World Congress?

Every other year, delegates from every INF-affiliated naturist federation gather together for a 3-day congress somewhere around the world. During this congress, half of the board members are being elected (to maintain continuity, only half of the members are elected during one congress, the other half during the next congress, and so on) and different motions and discussion points are being discussed and voted on.
Every federation has a number of votes, depending on its number of members. It may seem unfair that certain federations get more votes than others, but also the financial participation to the INF is member-based. So the more members a certain federation has, the more membership fees it has to pay to the INF, and the more votes it gets during the congress.
So the World Congress is where all the important decisions are being made and where the federations share their dreams and visions about the future of worldwide naturism. Oh no, sorry, we got carried away by our own dreams and visions for a moment. As mentioned earlier, most of the time during the congress is spent on discussing (in our opinion) details like whether a sentence in the statutes should say “and” or “and/or”. 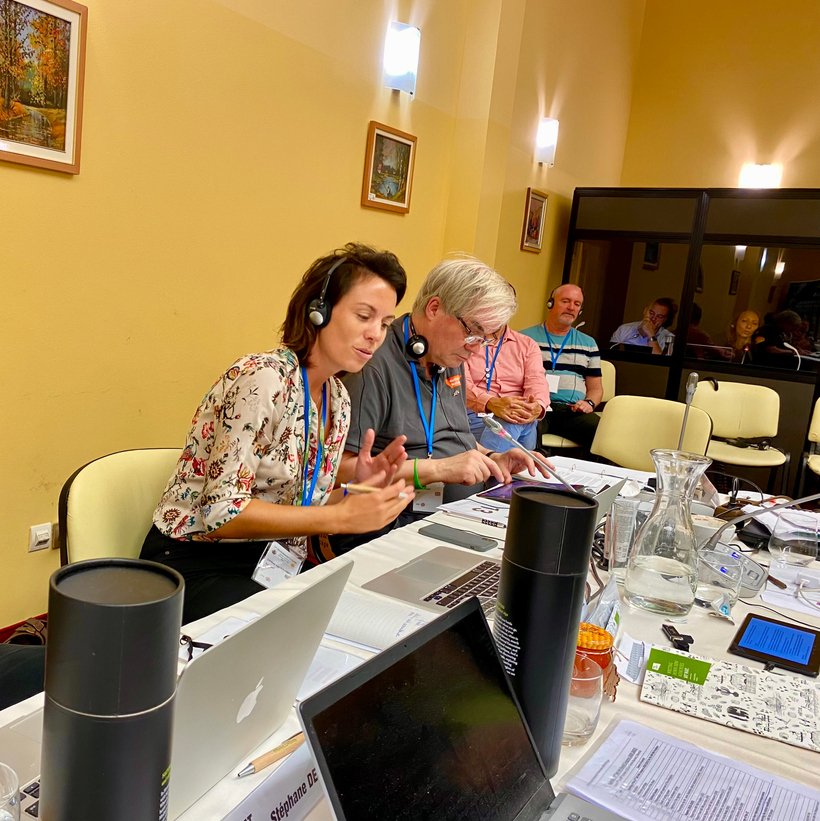 When the Dutch raised their voice

At the start of the World Congress in Slovenia, it didn’t seem like anything would be different than the previous congress we attended. It didn’t take long before we were dragged into the first endless discussion about a certain point in the statutes (we’re only writing this blog post a week after the congress and we can’t even remember anymore which point we were talking about).
Much to our surprise though, also what may have been the wisest words during the whole congress were said during these first moments when Christine Kouman (delegate for the Dutch Naturist Federation NFN) took the mic. We didn’t write down the exact quote, but it was something like “Aren’t we just trying to apply patch after patch on something that is thoroughly broken? Shouldn’t we look at the bigger picture instead of the details?”
At the time, we didn’t completely realize the impact of those words, but thinking back to the congress now, it could well be that Christine had right there and then set a foundation for how the next days would go.

Now don’t think that the atmosphere at the congress completely changed just like that. We did keep talking a lot about details in the statutes and did spend much more time than we wanted to on things that appeared to be not much more than quick fixes. But it seemed that most delegates tried to think in constructive long-term ways that would benefit international naturism rather than about the things that would be most beneficial for their own federation or members.
We’ll skip the boring stuff and move forward to the final day of the congress. A moment we – and probably most other delegates – had been looking forward to: The election of the new president. This was the only function that had two candidates, so for all other board functions that were up for election, the current board member was just automatically re-elected.
We could argue that changing only one member of the board – even though it’s the president – probably won’t change all that much. But the message that this election would send to the outside world could not be underestimated. It was all a question about whether a change could be expected from the INF or whether everything would remain what it has always been. 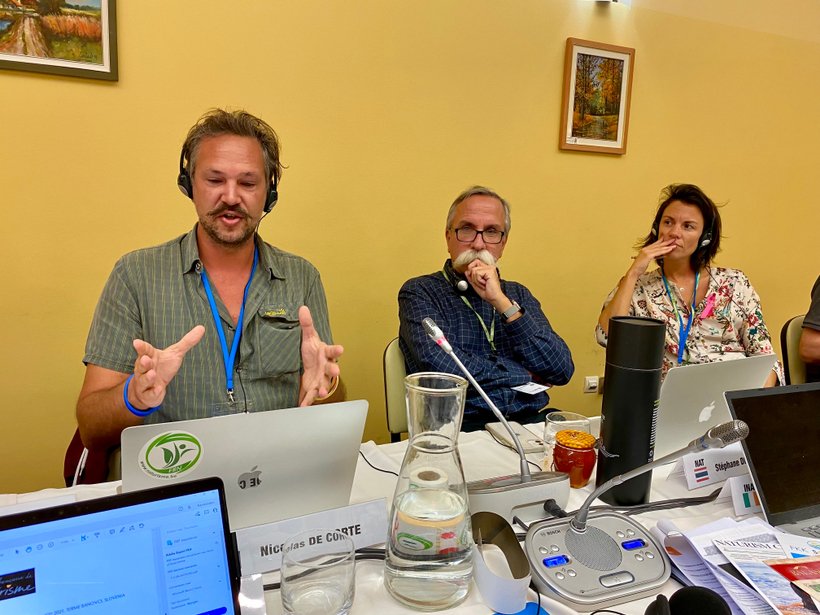 For us, it was a no-brainer. Change needed to happen now. The INF had to modernise. Stéphane had to become the new president. Everybody realized this, right?… Right?
The more people we talked to during the congress, the more obstacles we started to see. We have known Stéphane for many years, we talked a lot and we know what his ideas and visions are. But that’s not the case for many of the other delegates. Some barely knew Stéphane by name. Or didn’t know him at all.
We also realized that not every federation had the same views for the future as we did. Some liked the way things are today. Some didn’t feel the need for change. What seemed so obvious to us, was a rather daunting thought to others.
And then there was the transition. You can’t take over a president function just like that. Official documents need to be created, legal entities need to be contacted, signatures need to be put, banks need to be informed, and probably many other bureaucratic actions need to happen of which we don’t have a clue. If this election would turn hostile, the transition process could take a long time and cost lots of money. Even though some delegates tended to vote for Stéphane, they also questioned whether it was all worth it. Did they really want to vote for a president who would spend most of his time buried in paperwork? 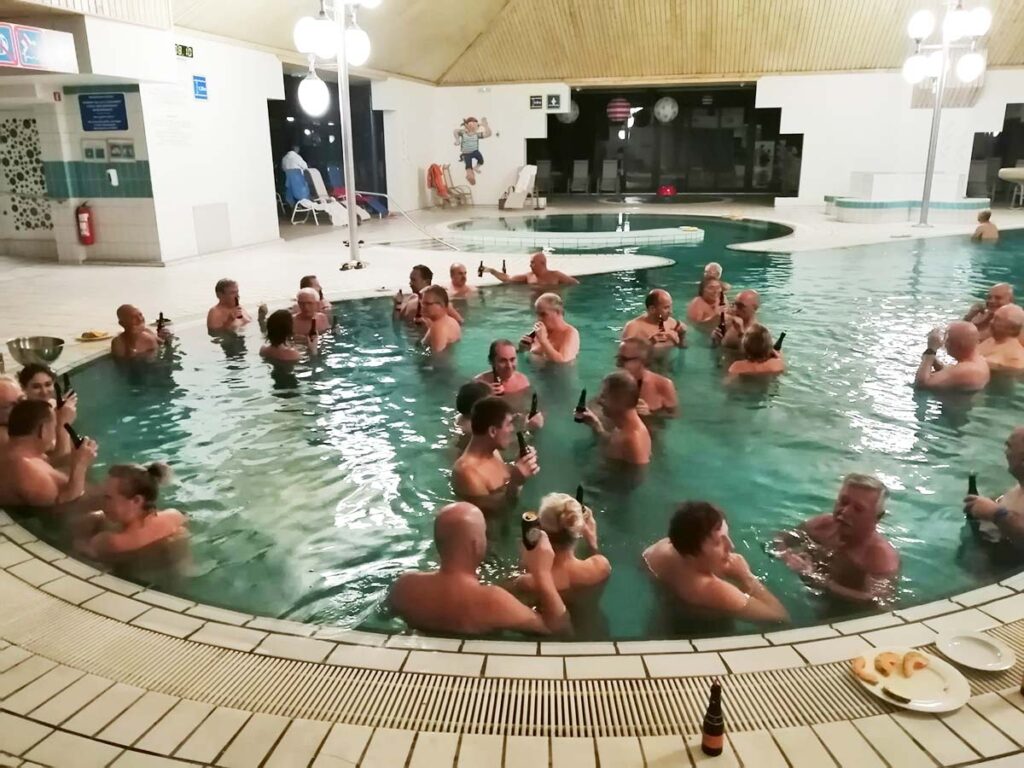 And then the INF suddenly got two presidents

We – and probably every other delegate – started guessing on the votes. Federation X has so many votes that will definitely go to Stéphane. Federation Y has so many votes that will go to Sieglinde. Federation Z… You get the idea. It became crystal clear that the Dutch Federation (which is the largest in the world and has the most votes) would eventually make the decision. Whoever they voted for would be elected the new president.
And then something happened.
Right before the voting, Christine (Dutch federation) took the mic again and dropped a proposal that left everyone astonished for a moment: “What if we went for a transition period with two presidents? After this period, Sieglinde could resign and Stéphane – if re-elected – would remain the INF president”.
Everyone was stunned. Not just because this was never seen before, not just because nobody knew how this would be organized, but most of all, because it sounded like an excellent idea. There was little doubt that this could be the perfect solution and the thriller election that we were all fearing never took place.

Why we believe in the concept of two presidents

It took us a while to get adjusted to this idea as well. For months, we had envisioned Stéphane being the one and only president of the INF and now he had to share the seat with the president that we actually wanted to move aside.
But then we started to see the advantages. This would give all federations the chance to get to know Stéphane, without having to put all the power in his hands. And it will be up to him to prove what he’s worth. As Sieglinde will also remain president, the board can count on her 13 years of experience in the function and her knowledge of the organization. Which will facilitate the transition enormously.
Most of all, both the federations who want things to remain the same and those who want change now have their own president on the board. This might be a unique opportunity to bring both sides together and work on a vision for the future that everyone can agree with. In the end, the INF is a federation of federations. Of ALL federations. And only if they are all looking in the same direction, there will be a bright future for worldwide naturism.
IMPORTANT SIDE NOTE: Although we participated at the INF World Congress as delegates of ANF and SANNA, please know that this blog post is about our personal experiences and ideas.

12 thoughts on “When the INF-FNI Suddenly had Two Presidents”