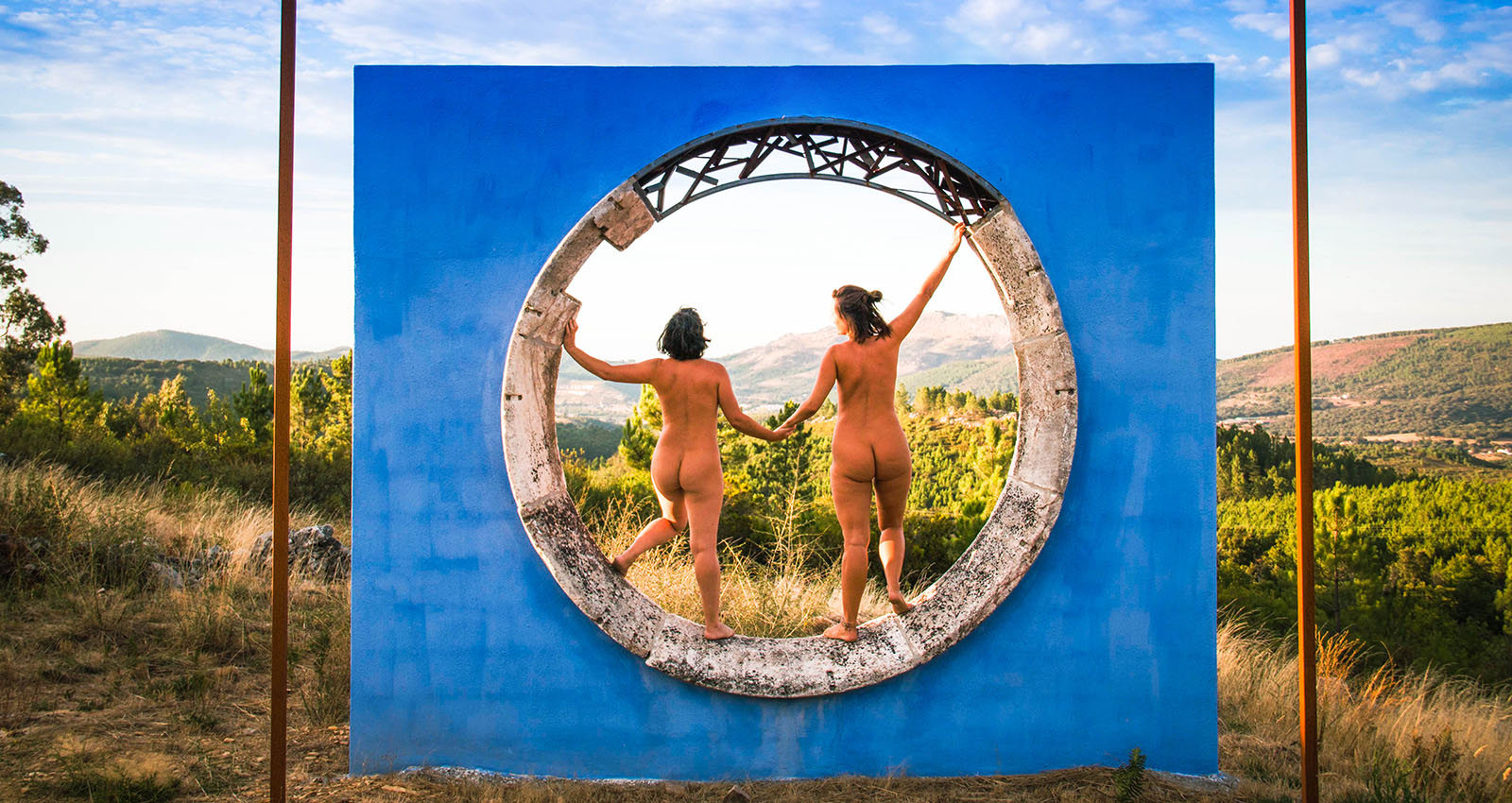 We’ve been publishing blog posts for more than 6 years now, and for the last 2 years, we also dove into creating videos. The one thing that put us in newspapers around the world though were the pictures that we shared on Instagram. We never really considered this, but our concept of self-censorship was exactly what the media loved. Nudity sells, that much is sure, but full-frontal nudity is something for magazines on the top shelf. We gave mainstream media the opportunity to illustrate stories about naturism without shocking the average Joe.
We chose our coverup strategy in order to be able to use social media, and by no means do we want to force this idea upon you. It’s totally fine to take fully nude pictures, we take them too, and it’s also totally fine to not put your photos on the internet too. We live in a digitalized world and these days we have hard drives to keep our memories, so we don’t need to rely uniquely on our brains anymore. Over the years, we’ve gained quite some experience in taking naturist pictures. Experience that we like to share with you. No matter if you want to take “Naked Wanderings style” pictures or prefer to go full monty.

For a very long time, cameras were a big NO at naturist resorts. These were camera-free places, where everyone could be comfortably naked, knowing that they would not end up in someone’s photo album or worse, on the internet. Today, it’s hard to imagine a world without cameras, but we remember our teenage years when we could just get completely wasted at a party and not receive the proof the day after via WhatsApp. Those were good days, but they are gone. We know it, and so do the owners of naturist resorts.
Most resorts still implement quite strict rules when it comes to photography. Some will not allow cameras in the common areas, some create special “picture points”, some will give you stickers to put over your smartphone camera(s), and so on. Everyone solves the photo risk in their own way, so before you start taking pictures at a naturist resort, it’s best to always look at the rules to figure out what’s allowed and what’s not.

Keep people around you informed

As (most) nude beaches are not privately owned, nobody can enforce such rules. Sometimes you may see an information board stating that no cameras are allowed, but what actually happens when you do start taking pictures all depends on the local laws. Of course, you want to avoid running into trouble altogether, and from our experience, the best thing you can do is just talk to the people around you before starting to point your camera in all different directions.
You may have the best intentions, but for others, it’s often hard to estimate how wide the angle of your lens really is. Phones these days come with pretty spectacular lenses and you can’t expect others to just know that yours is not set to ultra-wide. By talking to others, you also build trust. Just by saying “I’m just going to take some pictures of my wife, and don’t worry, you won’t be in there”, you can take much suspicion away. You can also show them your shots afterwards.

Unfortunately, the camera fear among naturists is not ungrounded. There are people who take pictures with the wrong intentions. Who try to take secret snapshots for their own pleasure or to share with others. The thing about secret pictures is that they are… well… secret. Those people will try to hide their cameras to avoid anyone noticing them.
You might think that in order to not disturb anyone, it’s better to take some sneaky shots, but that could seriously backfire. We’ve learned that it’s much better to have your camera in full sight. In fact, we used to have a big DSLR camera to take our pictures that was quite impossible to hide. When that thing broke down, we moved to a more compact version that was also good for vlogging. We can tell you that we feel less certain taking pictures with the small camera at naturist venues than with the large one.

Every photo enthusiast has heard about the “golden hour”, that time of the day when the sun is low enough to shine a golden light over the earth which is beautiful in pictures. There are 2 golden hours a day: Just after sunrise and just before sunset. We highly recommend using these times because they can take your photos to a whole other level.
An additional advantage of taking pictures just after sunrise is that, when you’re at a naturist place, most other naturists will still be fast asleep. So you can take pictures everywhere without having to worry that someone might accidentally pass by.

In portrait photography, one of the golden rules is to have the camera at eye level of the model. When your model is standing up, so are you. When your model is sitting on the beach, you also want to get lower. If your subject is lower than your camera, it’s going to look like a midget. If you put your camera too low, it will create a certain powerful feel. In fact, maybe this is exactly what you’re looking for, some politicians only have their pictures taken from a lower angle.
The lower angle actually can look kinda cool, but be careful. It also tends to emphasize your lower body parts. A good example is those naturist morning coffee pictures that look like they’re more about balls than anything else. We imagine that it might be difficult to find a spot in your kitchen where you can put a camera on eye level, but we’re pretty certain that this angle is sometimes also chosen intentionally. But they’re not fooling anyone.

One of the reasons why we developed our own style of naturist pictures was to create something different than the typical naturist photo: A naked person standing still, facing the camera, arms next to the body. As if they’re about to undergo a medical exam. The message they wanted to spread was probably “I’m naked and I’m not ashamed of it” or “This is what a normal body looks like”, but we thought (and still think) that this was not the best way to make naturism look interesting or fun.
Adding some movement to your pictures can definitely help with this. After all, naturists are people who do things naked, not people who stand still in front of a camera. With hundreds of gigabytes fitting on a minuscule memory card, you don’t need to take the perfect picture right away. Just keep shooting and something good will come out eventually. People sometimes ask us what the secret is behind taking those carefully covered pictures where something is always in exactly the right place. This is our secret… We just take hundreds of pictures.

Learn a thing or two about your camera

From the most basic smartphone camera to the most sophisticated DSLR, every camera has settings that could significantly improve your photos. In just a couple of hours, you can read up about ISO, shutter speed and aperture. You can learn how to make your backgrounds more or less blurry, how to add colour, etc. Thanks to technology and artificial intelligence, cameras are getting better and better at these things, but a bit of knowledge of your camera could make a great photo from a good one.
While you’re at it, you might also have a look at some editing tools. Photoshop is the most popular one, but also the most expensive. Most smartphones these days have free editing options included. This could help you cut out unwanted individuals from your pictures, and tweak the colours so they look like the golden hour even if you were a bit late.

Be careful what you do with your pictures

In this last paragraph, we’d like to talk about two very unrelated things. Number one is storage. With our smartphone turning into a camera, it became so easy to take pictures everywhere and have access to them all the time. We hardly ever think about all the memories that will be lost if something happens to our phones. Until it does. When we got robbed in Colombia, we could have lost thousands of pictures. Luckily we had them all on backup. This is something to seriously consider if you also take the majority of your pictures with a phone.
The other thing is the web. Remember the saying: What’s on the internet, stays on the internet. In a brave mood inspired by a great naturist vacation, you may decide to put a nude picture on the internet. When you change your mind after a couple of days, you take it down again. But you have no idea who may have taken a copy that could pop up somewhere else. We don’t want to scare you, we just want to make sure that whatever you put on the internet actually belongs there.

8 thoughts on “How to take better naturist pictures”