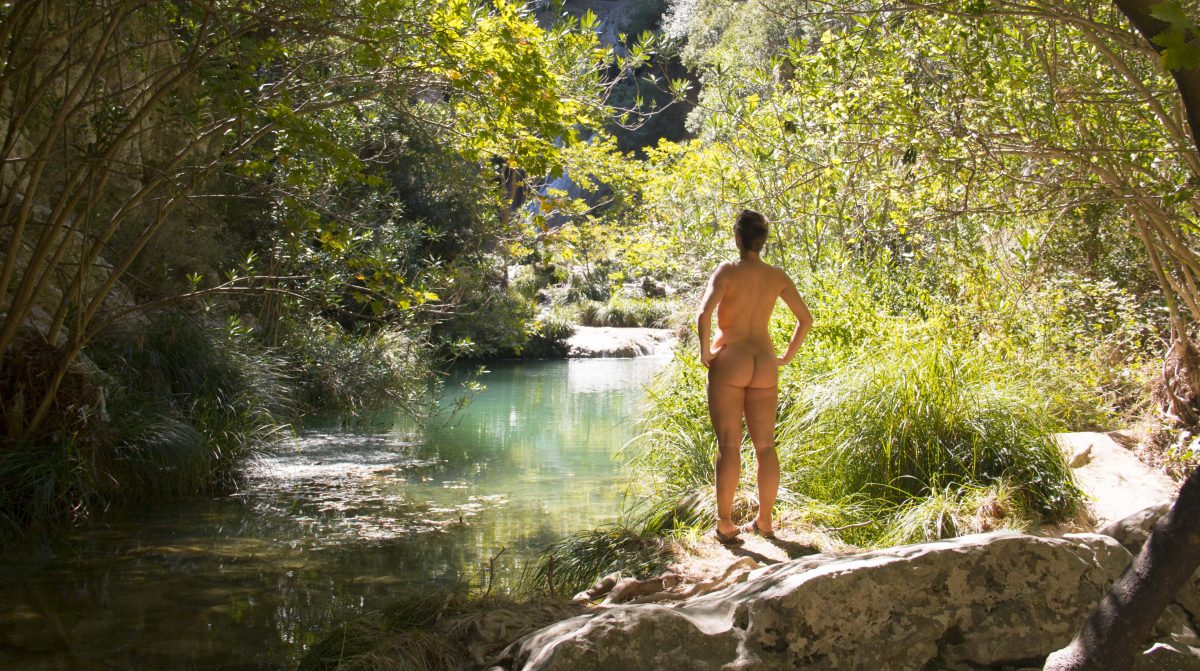 As the end of the summer, and thus the end of the naturist season as well, in Greece was fastly approaching, we had to evaluate our options for the next ten to fifteen days. Our main plan was actually to head north, in the direction of Thessaloniki, and try our luck for finding some last Greek nude beaches over there, but then our eye fell on an entry in our Google search saying Kalokeri Villas. Well, it was mostly the word “villas” that got our intention because we had no idea what “Kalokeri” means (meanwhile we know that it means “summer holiday”) and a villa was a type of accommodation that we still had to cross from our list.
So we went back the same way we had come only weeks ago, we’d been to north Peloponnese, east and south-east Peloponnese, but for some unexplainable reason, we never considered visiting the south-west of the peninsula. Until now. While we were there of course we wanted to check out whether there were any nude beaches in Messinia as well. And guess what… There were! And something even much cooler!
If you like to spend your days in the nude, Kalokeri villas is a great option and in the best location to visit the surrounding naturist opportunities. On this part of our trip, we left Captain Barefoot behind, not because he failed to give us accurate info in the past (although he did, we forgive him) but because we found a way better guide, a real-life one: Ralf.
Ralf is the owner of Kalokeri Villas, a long time naturist and connaisseur of the naturist opportunities in the whole area. Our new best friend. 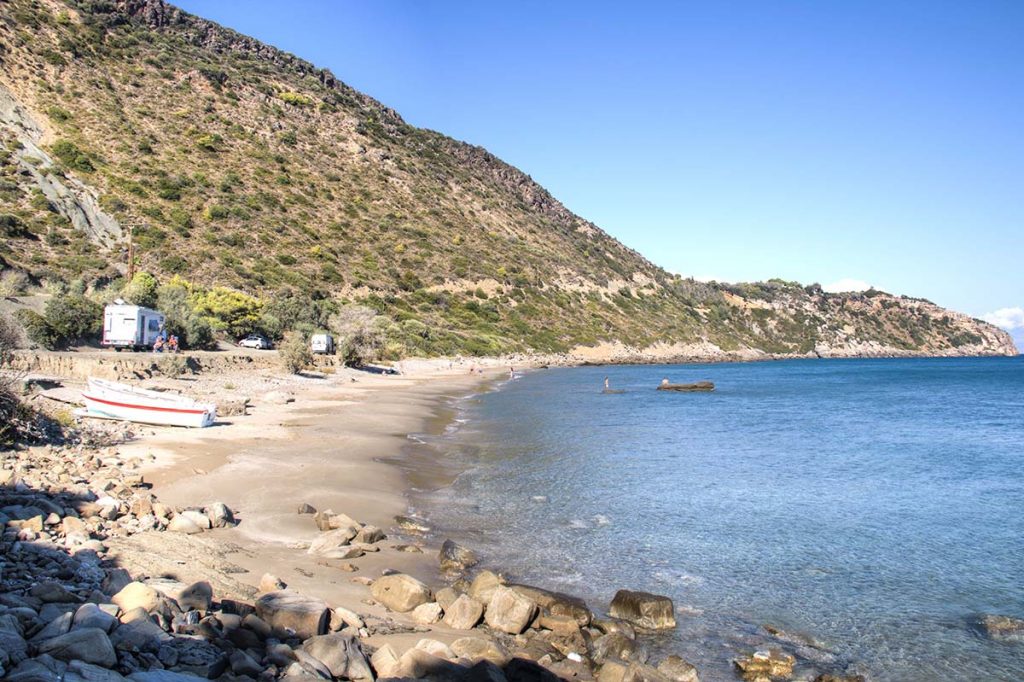 If it hadn’t been for Ralf, we would’ve already been set on the wrong foot. There is a town in the area called Kalamati, this is not where Kalamati beach is located. Kalamati beach is in a town called Faneromeni (well actually between Faneromeni and Vromrovresi). After being a while in Greece, we already knew that the Greek like to make things complicated, but from time to time they still surprise us. As if they find much joy in confusing the passing tourist or maybe it’s just because they wanted this beautiful beach all for themselves.
The latter we would understand, there are so many beaches in Greece polluted by beach bars, deck chairs and all the crap people tend to leave behind, that the locals might want to keep this pristine beach all for themselves. But they shouldn’t leave their sleep for us, we’re naturists, we care about their beaches. 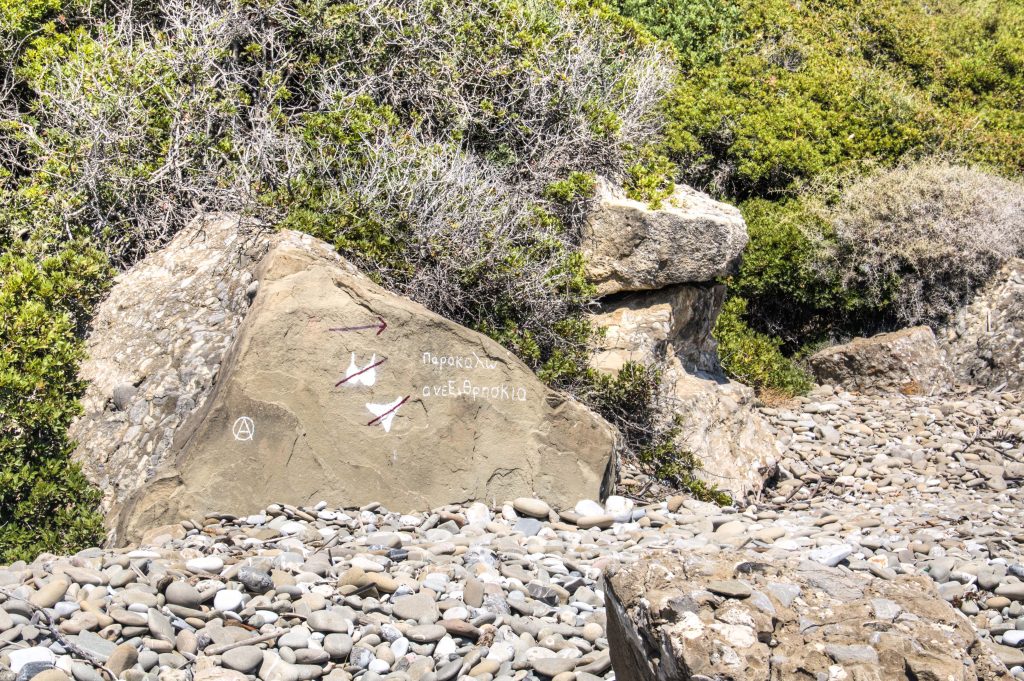 Kalamati beach is a short 15-minute walk down (but a steep 45 minute walk up) from Kalokeri villas, in a small bay at about the end of the road down from Koroni, which is 15 minutes away by car. The surrounding mountains, the view over the bay, and the shallow blue-green waters make the idyllic image complete. A great spot for an afternoon in the sun, or maybe better for a morning as in the late afternoon the wind tends to come up and gives you a decent sand shower.
If you’re on the beach watching the sea, walk to the left where you’ll see some big rocks on the beach. One of these rocks has drawings of a bikini crossed through. That’s where you want to drop your own bikini. 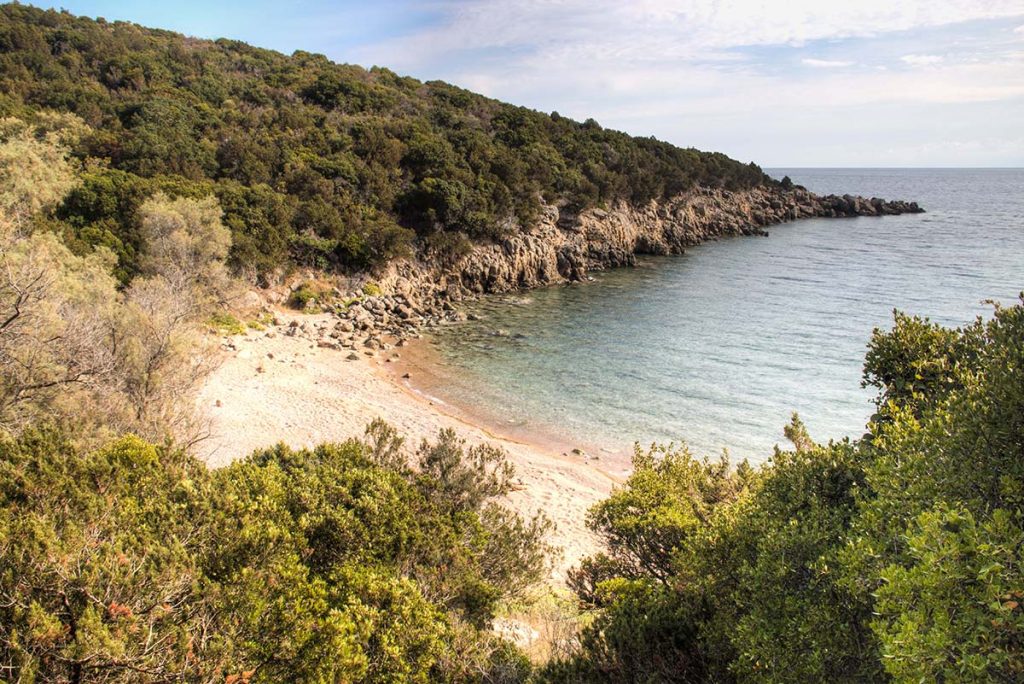 Even more idyllic but way more difficult to find are the Marathi beaches. On the main road near Finikounda you have to take a small side road. This will take you several kilometers on a very scenic but quite frightening mountain ride until you have to turn right on a dirt road. But this description won’t get you anywhere, without decent GPS coordinates or a guide like Ralf you’ll probably never find it (at least we wouldn’t). The last part of the dirt road is pretty heavy and should not be accessed without a 4×4, it’s better to leave your car at the beginning and walk the last kilometer.
➡️ Click Here for the best hotel deals in the area
If you’re reading about Marathi beach, they’ll tell you that there are two beaches, big and small Marathi. Both can be seen from the way down and look incredibly Caribbean. Since we got there at the end of the holiday season, both beaches were more or less deserted and we have to tell you, it did have a certain Blue Lagoon feeling being there all by ourselves. Both beaches are considered unofficially naturist except for August when they are flooded by local visitors.
When you happen to be there in August, or when you like exploring hidden places, we have a tip for you. If you take Ralf from Kalokeri Villas with you, he can take you to two nearby beaches that aren’t on any map. One is actually quite large and could easily fit 20 to 30 people (if they can find it) and the other one is just perfect for less than ten visitors.
A big advantage at these unknown Marathi beaches is that they consist of very little stones, so if you decide to take a nap on a windy day you won’t wake up under a pile of sand like a mummy in one of those bad horror movies. 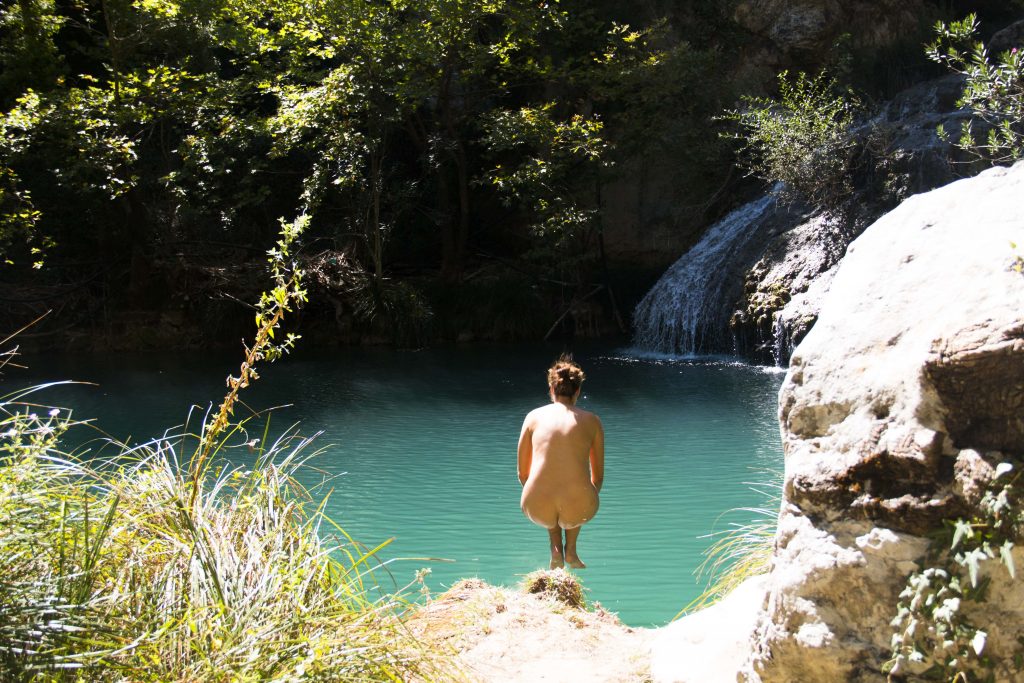 “One more thing”, the late Steve Jobs would have said if he had written this article. Indeed, we saved the best for last. Our trip along the Balkans has taken us to so many incredibly nice beaches, but we rarely got the opportunity to get naked somewhere else in nature. Ralf and his family decided to provide us this variety and took us to Charavgi where the Polylimnio waterfalls can be found. Now don’t expect an impressive waterfall, the highest noticeable one is maybe about fifteen meters but instead, you’ll find a variety of beautiful lakes (if we had done better research upfront we could’ve known as the name literally means “many lakes”). If you’ve ever visited Croatia, Polylimnio Waterfalls can be considered the little sister of Plitvice lakes.
Next to several small lakes and rivers along a walking trail, there are two bigger lakes which are suitable for swimming. Ninety percent of the visitors only go to the lower lake, so the top lake is perfect for skinny dipping. When we were there we were the only nudies around and we did have some passers-by who took the effort (more about that soon) to get to the top lake. But none of them seemed to care about our nudity.
Now there is a catch. On the beaches, the naturist part is often the most difficult to reach and at Polylimnio Waterfalls this is no difference. The path from the bottom lake to the top lake requires some pretty nice climbing, and we don’t mean a 20% steep hill. There are iron poles attached to the rocks and ropes to hold on to and you will need both hands and feet if you want to make it in one piece. Quite an adventurous walk, so to say.
But Greece wouldn’t be Greece if you could not cheat. For the less adventure-minded there’s a side road leading towards the top of the hill and from there it’s only a fifteen-minute (much easier) walk to the top lake. There are no signs pointing this way, so you’ll have to ask around how to get there.
In any case, we considered this one of the highlights of our trip around Greece and a must-do if you find yourself in the area. Although we love beaches, skinny dipping in an emerald green lake in the middle of nature is a whole other experience.

Other naturist options in Messinia

Like everywhere in Greece, naturism is pretty much accepted on every beach as long as you don’t mingle too much with the crowds. If you have a boat it’s easy to find yourself an empty cove but even on foot, you can get lucky. Except for August most of the beaches in the area are not very crowded so it’s often not that hard to find an empty spot where you can get naked.
This part of Peloponnese is not very densely populated and covers huge parts which are nothing more than nature, ideal for hiking. Because you’ll rarely encounter anyone on the mountain dirt tracks, it’s a pretty good place for a naked hike as well. Just keep in mind that the local villagers may not appreciate your nudity so bring something to cover up fast if someone would come your way.
Find the best nudist accommodation in the area on NUDE

4 thoughts on “Getting naked in Messinia, Greece”