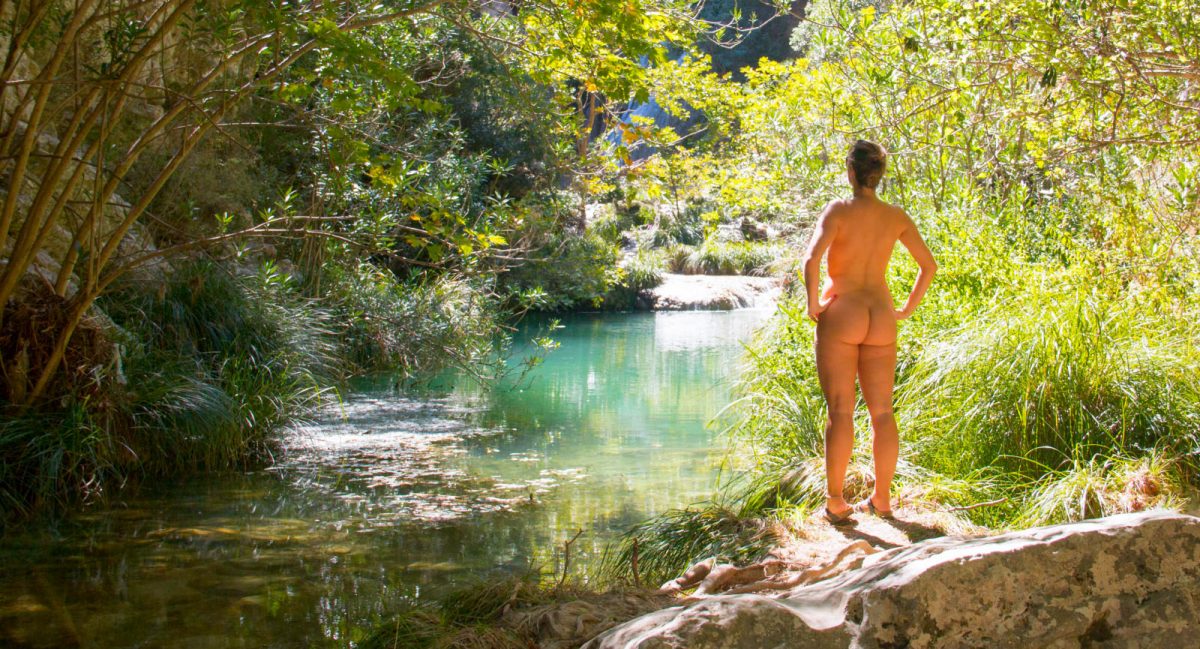 Ecological awareness, climate change and global warming have been hot topics for quite a while now. We would almost dare to call it a trend. It’s a bit sad when important things like those need to be hyped before people start thinking about them. Nevertheless, we’re happier that something like respect for the planet becomes trendy than let’s say Pokemon or Dr. Martens boots.
Naturists, in general, do take the condition of the earth and the human influence on it quite serious already. It’s in our mantra: “Respect for oneself, others and nature”. That’s why our nude beaches tend to be, especially at the end of a busy day, much cleaner than the surrounding textile beaches. Taking care of the environment is not something you do when you find the time for it. It’s not a hobby. It’s a state of mind. Something we also take along when we go on vacation.
With the following tips, you can make your naturist vacations even more eco-friendly than they already are.

Whenever your destination is more than a couple of hundreds of kilometers away, flying will always be the fasted option. With the uprise of low-cost airlines, it’s often also the cheapest way. It happened to us several times before that our train ride to the airport turned out to be more expensive than our flight. And flying has become super easy. With online check-ins and tickets on our smartphone and automatic passport controls, flying has actually become a very convenient way of traveling.
But it’s a disaster for your carbon footprint. So it’s important to always consider your options. Do you really have to fly? Can’t you get there by train or bus or Blablacar instead?
If flying does appear to be the only decent option, keep following things in mind:

✔️ The less you pack, the less weight on the plane, so the less carbon emissions it produces. You’re a naturist, why do you need luggage anyway?

✔️ Avoid stopovers. Not only will this make your journey shorter (so less fuel is used), also a lot of the carbon emissions come from takeoffs and landings.

✔️ Consider flying with an airline that is part of a Carbon Offset Program.

✔️ Choose economy class. Business-class airport lounges require the use of huge amounts of water and produce huge amounts of waste. Do you really need that during the limited time you’re going to spend at the airport?

✔️ Check out these 7 tips for zero-waste air travel.

Of all the animals we could pick from, we decided to like the one that requires a lot of resources to grow. We love a piece of a cow on our plate. How about letting your travels be the perfect reason to reconsider this? To check out what else is on the market. Maybe something that doesn’t drink 100 liters of water a day and produces as much methane as half a car.
It’s easy to blame everything on the cow and of course there are several other factors to take into consideration. Where does your food come from? Did it have to travel half of the globe to arrive at your plate or was it brought from down the road? And how about fish? Is it overfished? Does the fishing process make lots of collateral damage to other, inedible species?
We’re not telling you to become a vegetarian, but considering the origin of your food does help. A good rule of thumb is to eat what the locals eat. Buy from local markets and eat local specialties. Not only do you help the earth, but you might also learn some great new recipes as well.

Checking out the wildlife is often part of a vacation. Some wake up early in the morning to spot tropical birds, some take safaris to see the mighty big five and some take diving classes to check out what interesting species live below sea level. That’s all great and definitely a source of beautiful memories. Some, however, prefer the easy way and want the animal to be presented to them.
Shady tour operators found out that if they can make the animals reliant on humans, it takes much less effort to show them to the lazy vacationer. As a result, thousands of supposedly wild animals are now being fed or put into cages for our pleasure.
Always remember that we’re talking about WILD animals. They are supposed to be wild. They shouldn’t be begging for food so you can take a closeup picture. Lots of ex-wild animals have gone through a life of torture and famish before you get to see them.
Having your photo taken with a sedated tiger in a way too small cage in Thailand isn’t cool. It’s just very sad.

4. Bring your own bags and bottles

Single-use plastic has become a problem around the world. It’s the crown jewel of our throw-away mentality. We drink from plastic cups so we don’t have to carry them along. We buy plastic bottles because they’re light and can’t break. And we put our groceries in plastic bags because we’re too lazy to bring our own bags. Hell, let’s put two plastic bags in one so we’re sure it won’t break.
Why should we care? We recycle, don’t we? Someone somewhere will do something good with all our leftover plastic. That might be true but some of it will always get lost and end up in the ground or the sea. Plastic can take up to 1000 years to decompose. If you want to leave a souvenir for future inhabitants of the earth, please pick something else.
Another problem is that in lots of countries “recycling” is little more than a vague exotic term. We can’t blame those people but we can help them. Bringing a textile bag and your personal drinking bottle requires very little effort and just calculate how much plastic you’re not using.

Nude hiking is becoming increasingly popular and there are few other ways that can bring you this close to nature. You and the wilderness, both in all its purity. Because nude hiking is not legal everywhere and because we prefer to avoid encounters with clothed hikers, it’s often tempting to get off the beaten track.
The reason why many natural areas have hiking trails is not only because you wouldn’t get lost or because you’d have a rather comfortable path to walk on. It’s also meant to keep the hikers away from everything else. There’s quite some chance that next to the path are protected or endangered plants, you don’t want to trample on those, do you?

6. No chemicals in the water

Some of the most important assets of our vacation survival bag are sunscreen and mosquito repellent. Those two tubes are lifesavers. Or at least holiday savers. From morning to evening we cover ourselves with thick layers of cream that keep UV radiation and annoying insects at a distance. Comfy? Yes. Clean? Not so much.
The chemicals that are often used in these products are dangerous for most of the marine fauna and flora. There is a direct link for example between oxybenzone and octinoxate (two chemicals used in sunscreen) and the degradation of coral. The best thing you can do is to make sure that you only put natural products on your skin, that’s a lot healthier as well. If those are not available, make sure to wash the products off before going into the water. The showers on the nude beach aren’t exclusively for washing off sand, you know.

Blog posts like this one tend to make us feel bad about the steak we just had, the plane we just took or the plastic water bottle we just emptied while there’s perfectly clean water coming from the tab. Luckily, there’s a way to ease our mind. We book at an eco-resort and our ecological footprint automatically reduces. Unfortunately, that’s not always how it works.
Although there are definitely eco-resorts where the main focus is on the conservation of the surroundings, it’s also a very loosely used term. There are no rules to call yourself eco-friendly. Some think that it’s enough to have a solar panel on the roof and some birds in the tree to call themselves an eco-resort.
Therefore it’s important to check whether they have official certifications or possible recycling programs. If their website doesn’t mention this, ask for it. If they say they do but you find out that they don’t, complain about it. What if you would book at a nudist resort and everyone would appear to be clothed, you wouldn’t be too happy either, would you?

8. Don’t shower for an hour

Only 3% of the water in the world is fresh water. About two-thirds of that exists in frozen glaciers or in other places where we can impossibly get it. Which leaves us with one percent for 7.7 billion people. A lack of fresh water will become one of the world’s major problems very soon.
Given that the average shower produces about 8 liters per minute, if 25 visitors of the naturist resort would all shower one minute less, together they would save 200 liters of water. That’s the daily quota for a family in a Delhi slum. But it’s a good thing that you’re only showering. The average bathtub contains more than 200 liters.
Again you can help with only the slightest effort. Take shorter showers and turn off the water while you’re shaving, shampooing and brushing your teeth. Always pick communal showers over private ones. The showerheads may produce the same amount of water but the resources needed to clean communal showers are much less.

9. Turn off lights, TV and A/C when you leave

Although electricity is a much cleaner form of energy than gas or petrol, it still needs to be produced somewhere. Windmills and hydroelectric dams still need to be built and maintained. Even the solar panels of the roof of the eco-resort need to be cleaned one day or another. It doesn’t really matter where the energy comes from, it’s always a good idea to be careful with it. Especially when you don’t need it.
A TV doesn’t need to play when you’re not in your room and neither is there a need for light. And A/C… well, after a hot day at the beach it’s very pleasant to arrive in a cooled down room. But it just isn’t worth it. Most of the time it takes less than 30 minutes for the A/C to cool down your room. That’s just enough time for a beer in the bar. So turn off your A/C when you leave in the morning, turn it on again when you come back, wait in the bar until your room is cool enough and you can tell everyone that you’ve been saving the planet while drinking beer.