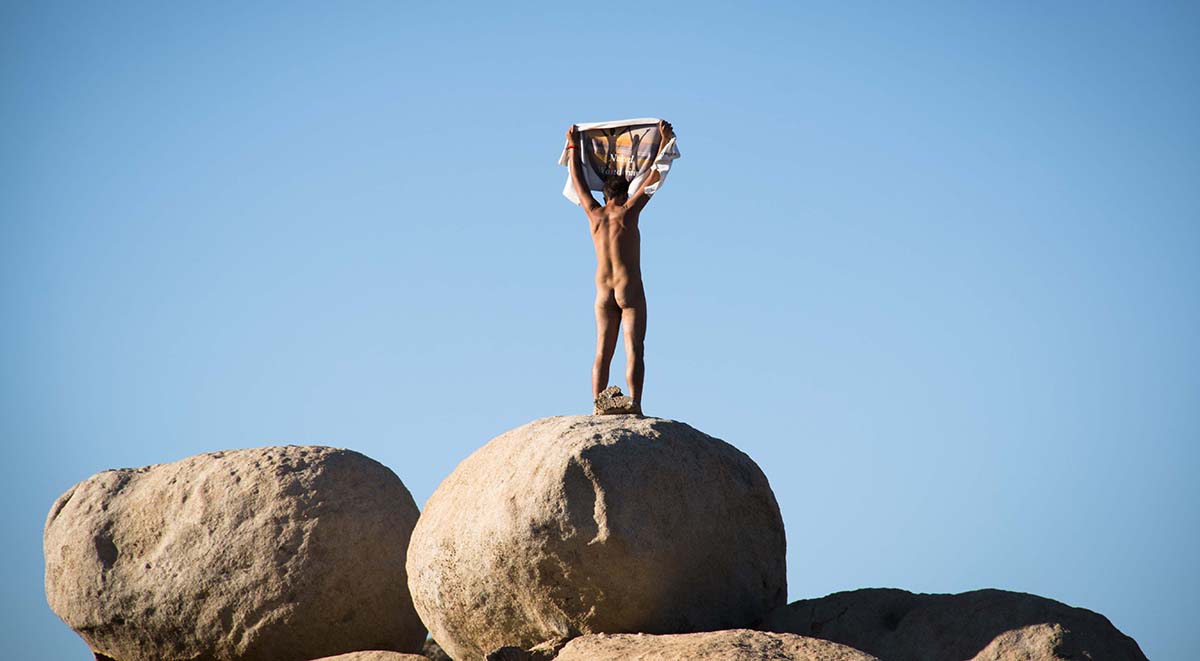 Last week we’ve written this whole article about the first steps into nudism for women. With the whole cultural background thing it is a fact that these steps are often considered more difficult to make if you’re a woman, but men have their issues too. Yes, in highschool we did shower together with twenty of other teenagers, but those days are long gone. For years and years we’ve rarely seen another human being naked if it wasn’t our partner and now we have some doubts. Our bodies aren’t as tight as they used to be, our muscles sank in this comfortable layer of what we like to call “the good life” and then there’s that other part…
Let’s start with some penis talk.

1. Is my penis large enough?

So few will admit it and yet so many who worry about this. We like to call “him” our manhood and the larger he is, the more manly we are, right? So the last thing we want to happen is to be the guy with the smallest penis.
Well… All of that manhood stuff is pure bulls… (sorry, we’re in the USA at the moment, we can’t say those words out loud anymore). The size of your penis does not make you more manly, does not make you a better lover and does not make you more sexually attractive. At least not at a nudist place.
We’ve really seen all shapes and sizes and chances are really really low that we haven’t seen several that were pretty similar to yours.

This might be the most discussed topic when it comes to male nudism, what do you do when things start to go up? Opinions about this differ, some say that it’s sexual and that you have to hide it, others say that it’s a natural thing and nothing to be ashamed about. There’s no right or wrong here, it all depends on how the persons around you think about the subject. So let’s go for the general consensus among nudies.
First of all, getting an erection at nudist places is very rare. We’ve seen thousands of male nudists in our lives and only a handful of upward going penises. So don’t worry too much about it. If it does happen, turn on your stomagh, cover up with a towel or get into the swimming pool. You could also pretend that nothing happened, but do realise that it might be interpreted wrongly.

Enough penis talk but yet another difficult subject.
Many nudist venues are not very keen about receiving single men. This might seem pretty discriminating and in fact it is, but single men have two major disadvantages. One is that there are many more single men interested in nudism than single women and those places like to keep a male/female balance to keep things comfortable for everyone. The second reason is that if bad things happen, they’re most likely to be caused by single males. So a negative stereotype has been created over the years which is hard to get rid of.
Our best tip: Don’t e-mail the place you want to visit, but give them a call. Explain your situation, answer their questions and you may be much more likely to get accepted.

4. How to behave as a single male

We know that also this is discriminating and that many nudists will be furious because we’re writing this, but it’s the truth. As a single male it’s better to watch your steps a little bit. Don’t get all paranoid, it’s not like the whole place will see you as a pervert, but keep a couple of things in mind. For example, don’t place yourself in between women, try to get to meet the other men first. And certainly don’t place yourself in between the children!
Although what you’re about to say may be 100% genuine, try not to complement women too much about their looks as this can be easily interpreted wrongly. And most importantly (but maybe also the most difficult), act normal! Don’t go sitting in a faraway corner because you don’t want to disturb anyone else, but try to engage in conversations. Try to make friends, but focus on the other men first.
Oh and another good tip: In volleyball it’s common to give your partner a smack on the butt if he or she scored a goal. If it’s not your wife, don’t do so.

Because of this whole single male issue and the quotas that nudist venues often use to maintain a balance, your best chances are at the bigger places. In our experience, most of the very large campgrounds and resorts always have enough guests to somehow keep some balance and they rarely bother about a man more or less.
Another option is of course the public places. On nude beaches for example, nobody is in charge or will tell you that you’re not welcome. On the other hand, unless you’re a very social being, on public places it’s much harder to make friends.

We’re not the biggest fans of nudist federations and clubs, but we believe that for the single man they do have some advantages. Being a member means that the club or federation has already met you or at least knows who you are. The membership card is like an ace during poker. It doesn’t mean you’ll get into all nudist places, but it’ll certainly give you an advantage over those who are not members. Also, pick an active club. Some clubs are just there taking your money and giving you a card while others do their very best to organise activities to bring people together. Pick one of the latter and you’ll soon have a lot of new nudie friends.

Again, there’s that stereotype and although we surely don’t agree, we do want to give you some tips to work with it. Yes, if you’re coming with a friend, many of the others may think you’re gay. But so what? You’re not here to find a one night stand, are you? (if you are, nudist places are not the best hunting ground, we can tell you that). Others will be much more likely to strike up a conversation when it’s the two of you and even if they wouldn’t, at least you’ll have someone to share the experience with. But don’t come as a group. Single men may be sometimes frowned upon, groups of single men are even less accepted.

It’s a common misunderstanding that single male nudists don’t have a relationship. It does happen that their wife or girlfriend is not interested. Neither is she in football or in getting wasted at the local bar, but that’s never an issue. When she’s not interested in nudism, this means that you’ll have to go as a single man. You can try to convince her, you can try to make her read all articles and magazines and websites about nudism you can ever find, but sometimes she just doesn’t want to take the step.
In such a case, don’t, and we repeat, DON’T drag her into it as a surprise! This is not a joke. The chances that she’ll say “oh, well, we’re here now, let’s give it a shot” are very very low. There may be tears, there may be shouting, there may be stuff thrown to your head and if you’re really unlucky you’ll have the divorce papers tomorrow. Trust us, surprising someone into nudism is similar to getting a face tattoo when you’re drunk. It rarely works out well.

9. Towel, sunscreen and a good book

Yep, we’ve mentioned this one in last week’s article as well and we’re mentioning it again just because it’s sooooo important! When you’re at a nudist place, you always have to sit on a towel. And yes, as a first timer you will forget about this, but as soon as you notice, please correct yourself.
We weren’t going to talk about penises again, so let’s just tell you this: An overdone sausage doesn’t ruin a BBQ, but it will certainly ruin yours. Especially if it’s your sausage. The same thing counts for those hams, by the way.
And a good book, we’re still huge fans of reading at a nudist place instead of looking at cats and kids on Facebook or checking out the latest football stats. They’ll still be there when you get home, don’t worry.

21 thoughts on “9 Tips for the First Time Naturist Men”