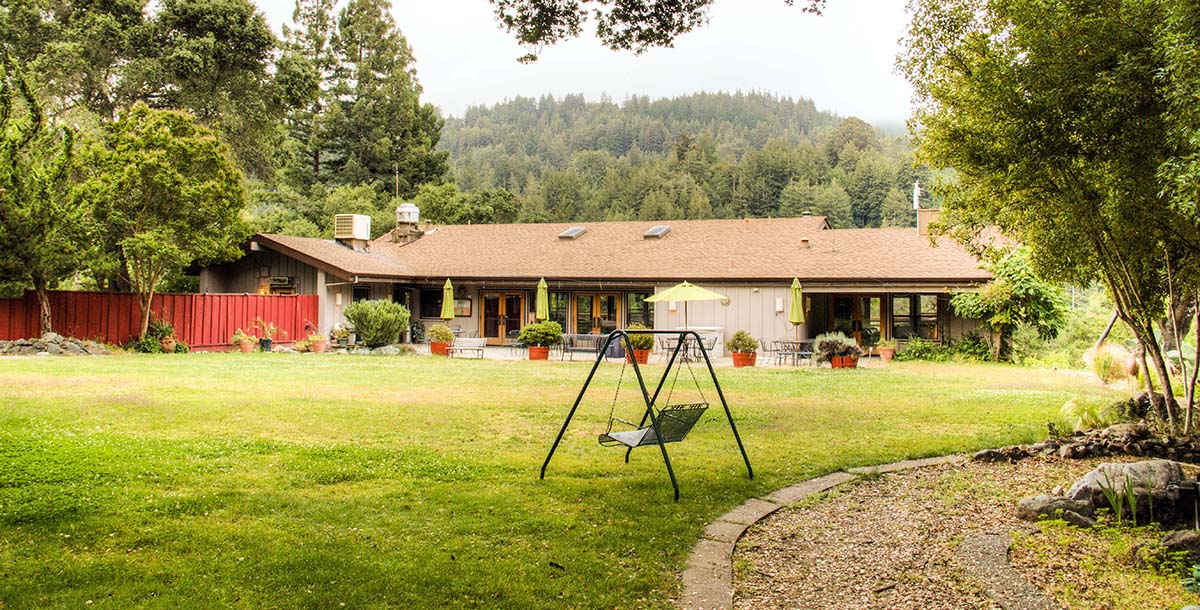 After spending almost a month in California we kind of thought that we had seen it all. We had visited Deanza nudist resort in the desolated desert near the Mexican border, we had gone hiking naked towards Deep Creek hot springs, we stayed at two magnificent bed and breakfasts in the two equally impressive cities Los Angeles and San Diego, we stayed at the top notch luxurious nudist resorts Terra Cotta and Desert Sun Resort in Palm Springs and we had experienced a European style spa at Living Waters.
Really… What more could a single state in the USA have to offer?
Apparently a lot. Welcome to Lupin Lodge!

How to get to Lupin Lodge

By spending so much time in the southern part of California, we had gotten pretty used to the sight of sand, rocks, cactuses, and Joshua Trees. Only when we were driving towards Lupin Lodge, which is located right in Silicon Valley, and huge pine forests started popping up at both sides of the road we realized that this was going to be yet another unique experience. The flora was beautiful and promising road signs telling us to watch out for deer, bears and several other types of forest wildlife made us dream of the American woods as we had seen them on National Geographic Channel.
Lupin Lodge can be found in the middle of one of those forests and with “can be found” we don’t promise you that you’re actually going to find it. Our GPS pretty much knew the way but when we drove up and down the road we couldn’t spot a single sign indicating the entrance of the resort. So we drove back a little slower and then we drove up again, even more, slower and that’s when we finally spotted a very small sign with the house number and the logo. We had arrived. 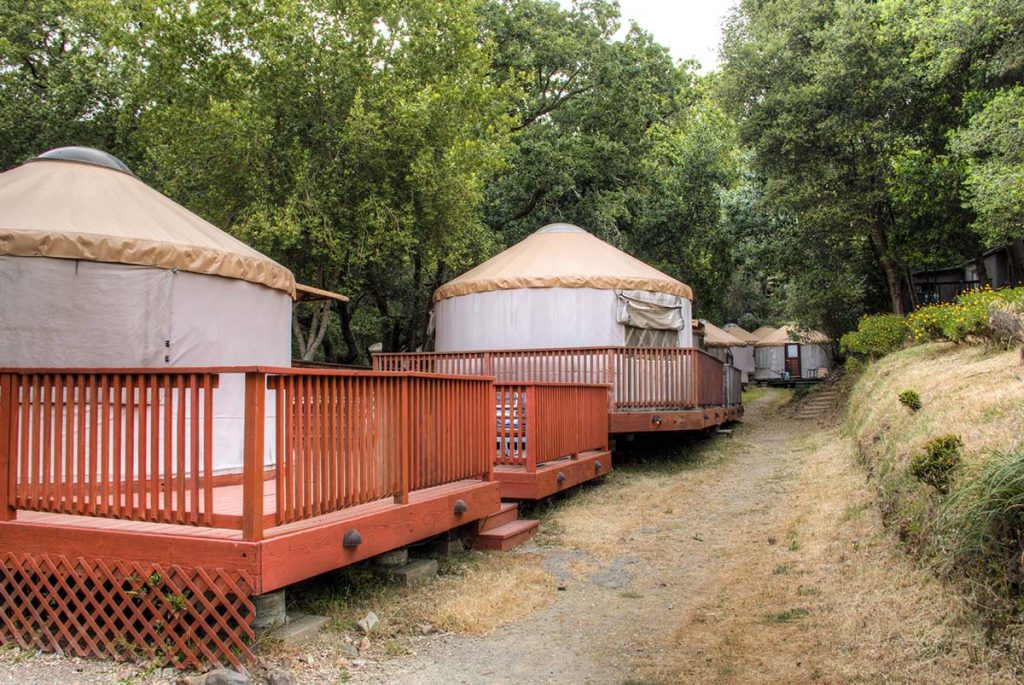 Where to stay at Lupin Lodge

Ever since we’ve seen a documentary about Mongolia (yep, we do watch a lot of National Geographic), we’ve been wanting to spend a night in one of those typical yurts. But of course, the nudist options in Mongolia are little to none. Luckily, we’ve got this chance at Lupin Lodge as it is their standard type of rental accommodation. A real yurt!
The experience probably wasn’t exactly the same, there wasn’t a yak in front of our door when we woke up the first morning but instead there were a couple of deer which are kinda close if you haven’t put in your contacts.
The advantage of staying in a yurt in the hills near Los Gatos instead of one in the Mongolian highlands is that the Californian ones come with extra advantages. Wifi, for example, electricity and a very much appreciated electrical blanket. The coolest thing of a yurt however is that the top of the tent is open (well, in plastic) so you can see the stars from your bed without having to worry about mosquitoes or freezing to death. 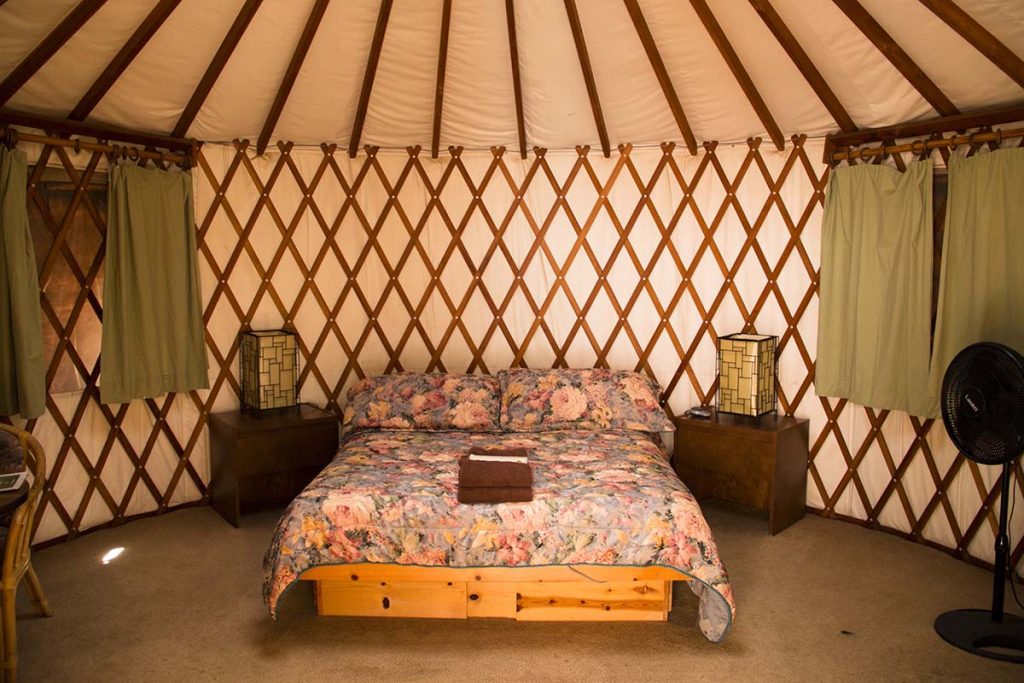 What to do at Lupin Lodge

Lupin Lodge suffers a bit from what we like to call the “old club syndrome”. Years ago it was probably one of the fanciest places around but today it’s a bit in need of some basic maintenance. On the other hand, if there’s a place that can get away with this it’s probably Lupin. Just like at DeAnza resort, the fact that it’s a bit run down adds somehow to the atmosphere, although a little maintenance certainly wouldn’t hurt.
But everything is available for you to have a great naked stay in the woods: A huge swimming pool, a very nice hot tub, a volleyball field, a restaurant, and several activities organized on a weekly basis.

The major reason why we ended up at Lupin Lodge was that we wanted to participate in the Bay to Breakers event in San Francisco. Bay to Breakers is a 12K run through the city which is a lot more about getting dressed in the most ridiculous way than about actually running. Every kind of suit is allowed, even your birthday one. Walking naked through San Francisco was an opportunity we didn’t want to miss but unfortunately, the temperatures were that cold that Nick chickened out (and that’s the last thing we want to hear about this).
Side note: We have to congratulate Lupin Lodge about the great organization to bring the nudist troops towards what they renamed to the Bare to Breakers.
Bay to Breakers or not, San Francisco is always great for a day trip, and if you’re luckier with the weather than we were you might even add a day on Baker Beach, the city nude beach, and have a picture taken of your naked behind with the Golden Gate Bridge in the background. Other great day trips include the city Santa Cruz, the beaches near freeway one (where you might find an empty cove suitable for a skinny dip), searching for Mark Zuckerberg in Silicon Valley to give him the middle finger for blocking you again and if you wake up very early you can even make it to Yosemite National Park and back. 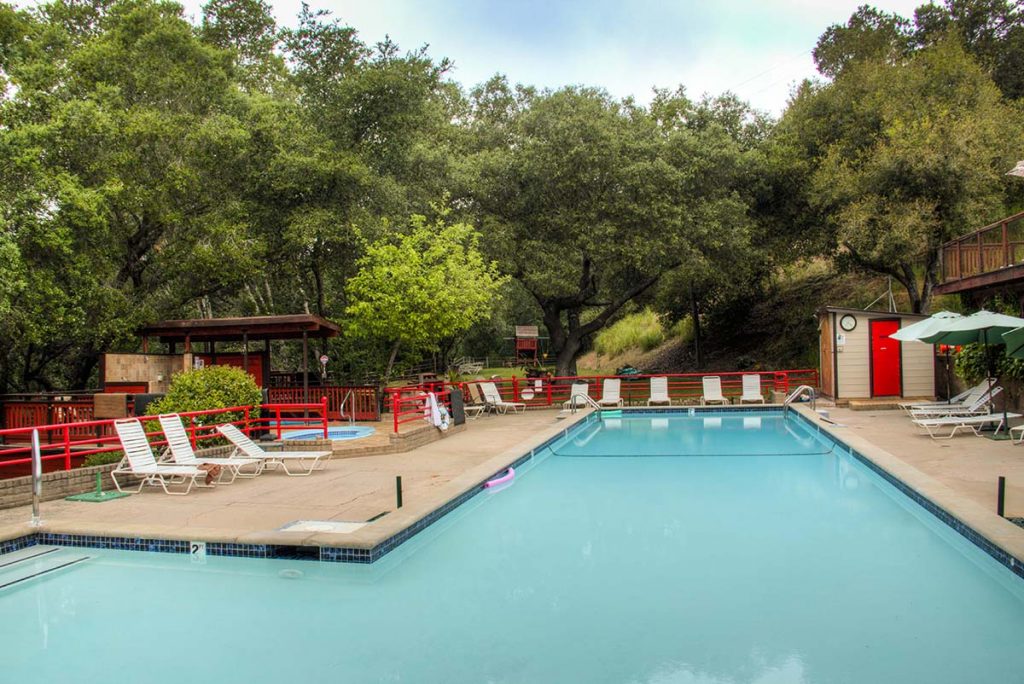 Other than at the fancy resorts in the Coachella desert, the staff at Lupin is not wearing any kind of uniform so it’s hard to figure out who’s actually working there and who’s a guest. But then again, sometimes it looks like everyone is a bit of both. One person who’s certainly part of the staff is Michelle, who took very good care of us and gave us her favorite yurt. Someone else we’d like to mention is the tall guy whose name we unfortunately forgot but who made sure that the transport to Bay to Breakers and back went fluently and who took very good care of all the participants. Thanks a lot, man (or need we say “dude” in California?) 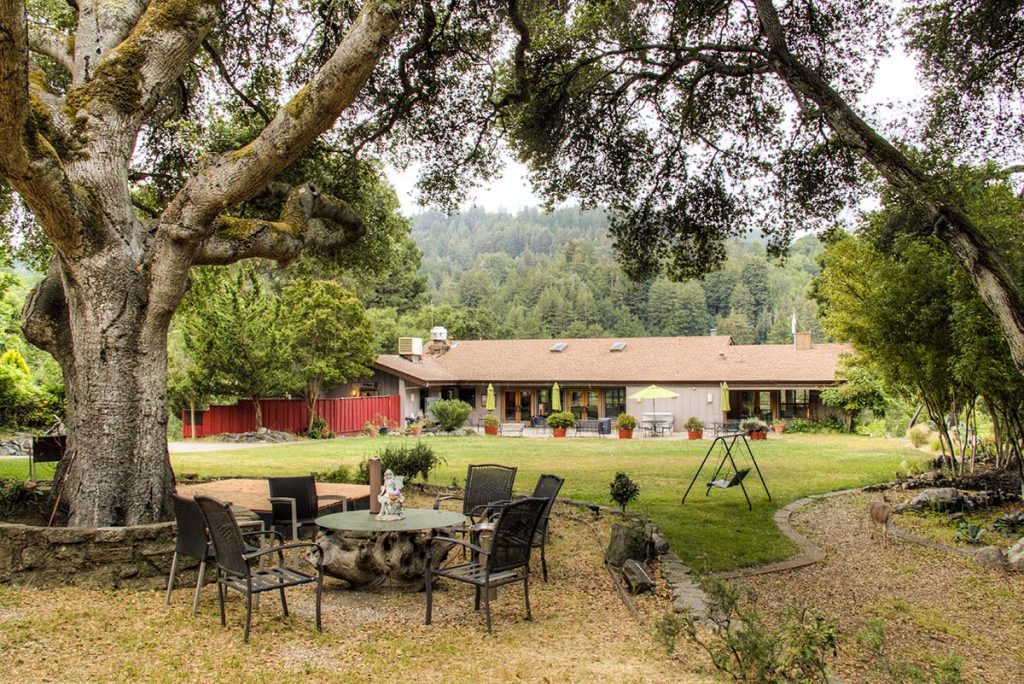 When we were there, the guests were an interesting mixture of young and old, couples and singles, participants of the Bay to Breakers, and random nudies who like to spend their naked time in the woods.
If you believe that nudism (or naturism) is all about getting back to nature, Lupin is probably one of your better choices for southern/central California and if you also like to pretend that deer are actually yaks, it’s certainly where you want to go.

At the time we were at Lupin we were pretty much in a hurry. Our visit was last minute added to our itinerary because we wanted to run naked through San Francisco which didn’t really work out the way… Ssssssst! All we want to say here is that we regret that we could only stay two nights. Next time we’ll certainly book for a whole week.
Read more about the Lupin Lodge on NUDE
More info and reservations: Lupin Lodge
Disclaimer: We have been invited as guests of Lupin Lodge, but of course all opinions are our own. We are super confident you will like this place as much as we did!
Naturist Destinations ➡️ USA ➡️ California