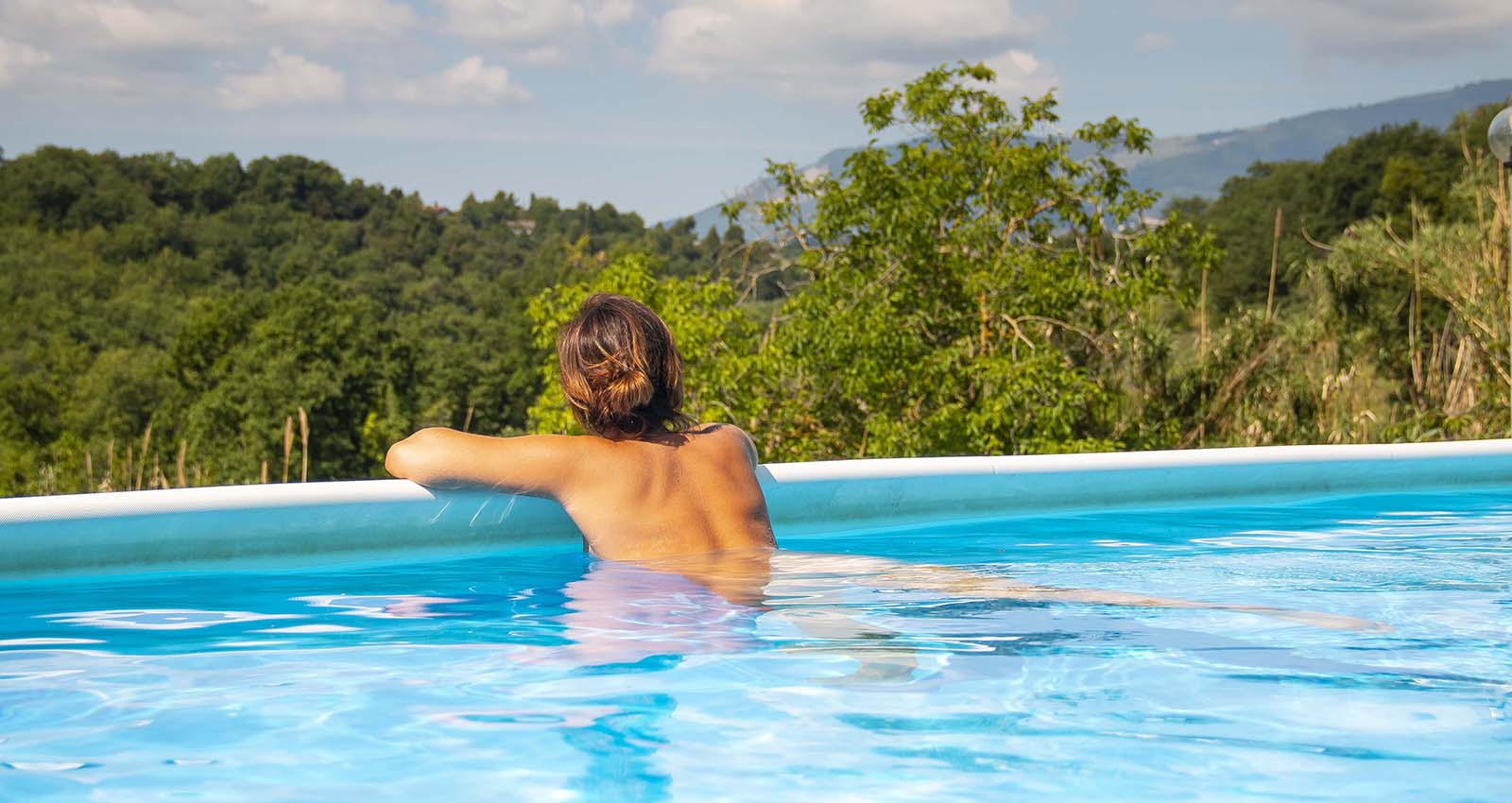 Throwback to last summer when we did an epic naturist road trip in Italy, from the very south of the country up to the very north. An amazing experience that we won’t easily forget and that we often like to think back about. Just because it keeps putting a smile on our faces. The other day, when we mentally did the trip once again, we came to an interesting realization. Of the 7 naturist resorts that we had visited, only 3 were Italian-owned.
This simple fact could lead us into a discussion about the geographics of naturism, but let’s keep that for another blog post. We don’t want to picture this as a negative thing either, because most of the non-Italian resort owners we met had been living in the country for over a decade and became quite Italian themselves. But if you’re looking for a true Italian naturist experience, you just have to go hang out with the Italians. And guess what, we know just the place for you: La Sorgente. 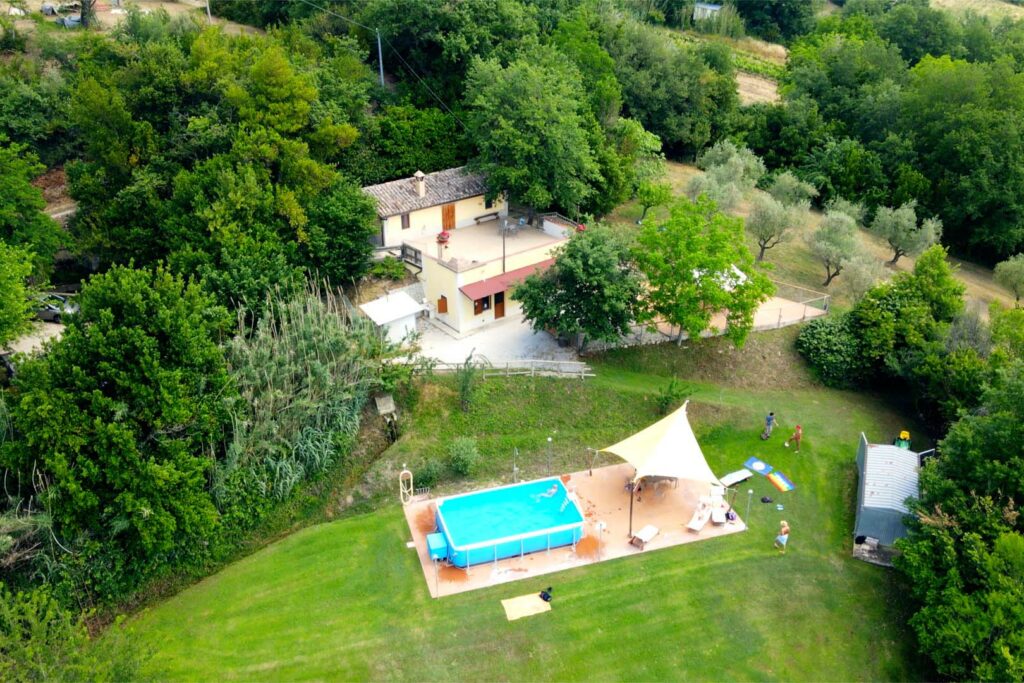 How to get to La Sorgente

La Sorgente is located in the Abruzzo region, which is if you look on the map, right east of Rome. On the Adriatic coast. If you’re driving in from the north of Italy, you want to get on the E45/E55 highway which will take you all along the coastline and is exotically called the “Autostrada Adriatica”. Once you get to Pescara, you want to switch to the SS602 local road towards Catignano. Just before you get to town you should start seeing signs towards La Sorgente.
Coming from the south of Italy, you can either choose to take the E45 via Naples, get off in Cassino, and take a number of scenic roads through national parks from there. Or you can get on the coastal highway E55 that passes by Bari and Foggia. As you may realize by now, a GPS is probably the best solution. Just follow the direction of Catignano and you should be able to find La Sorgente. Even if you miss the signs, it’s a small town and people on the street will most likely be able to get you to the B&B.
Italy has an excellent train network, so we can highly recommend doing a part of your journey by public transport. The major nearby train station is Pescara which has direct connections to all major cities in the north and south. To give you an idea, the train from Milano (very north) or Lecce (very south) doesn’t take more than 4 hours. From Pescara, you’ll have to rent a car or take a taxi for the last 20 kilometers.
Pescara also has an airport. Other than some domestic destinations, there are flights from Brussels, London, Krakow, and several other European cities. If you don’t find a decent flight to Pescara, it’s better to fly into Rome which is just a 2-3 hour drive away.

➡️ Check out our Travel Resources Page to find the best deals.. 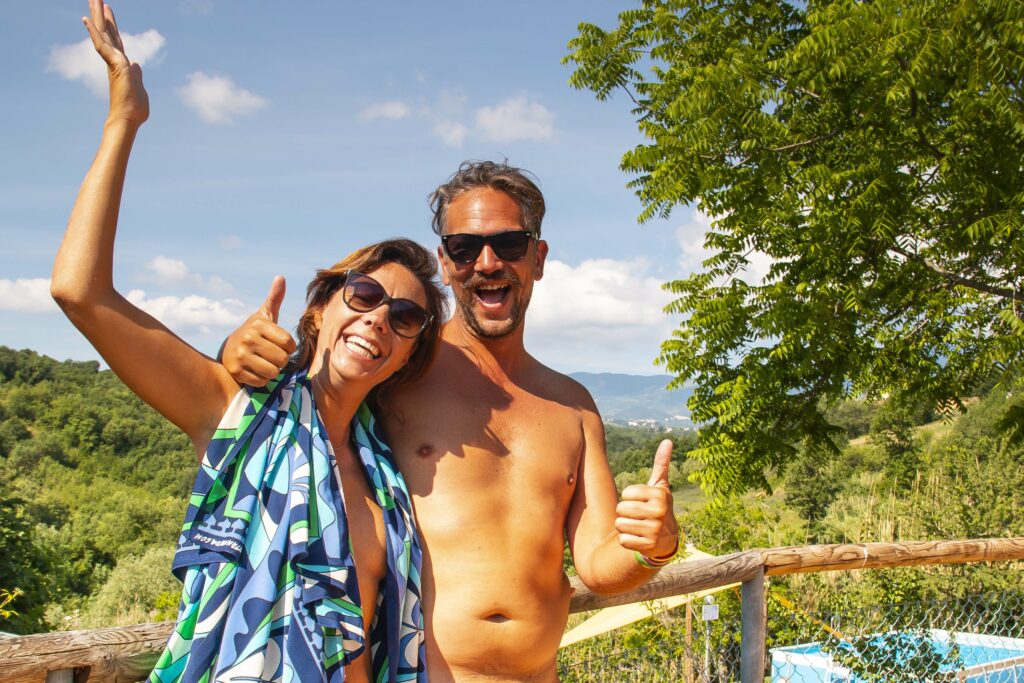 Where to stay at La Sorgente

La Sorgente is a small B&B with only two rental apartments, conveniently called the “Lower apartment” and the “Upper apartment”. We’ve stayed at the lower apartment, but also got the chance to have a look inside the upper one and we can tell you that both look very similar. Both apartments have a large bedroom slash living room, a fully equipped kitchen, a private bathroom, and a very large terrace.
The whole building used to be the old family house and is in the typical style of the region. Didn’t we mention something about a true Italian experience in the introduction?

What to do at La Sorgente

As you may expect from a bed and breakfast of this size, this is not the kind of place where you’ll be surrounded by loads of other guests or where you’ll find an abundance of facilities. For us, La Sorgente is where you come to escape the busy life and just relax, where you downshift a couple of gears and enjoy the sun, nature, a good book, and of course, the many Italian delicacies.
The “recreation part” of the property can basically be divided into the huge lawn where you can sunbathe and where you’ll also find the swimming pool. Further down the hill is the “forest part” which is an excellent getaway from the warm afternoon weather and where you can doze away in a hammock.
To get a better idea of what the property looks like, we recommend you to watch the below video.

What we’re about to say next might disturb some Italians, but when we were in Abruzzo we often felt as if we had found “the real Italy”. Many people know the enormous WOW-factor of Tuscany, the excellent food of Apulia, the canals of Venice, and the historical treasures of Rome, but those places also get overrun by tourists throughout the whole year. What we found in Abruzzo seemed like the Italy that nobody else had found yet.
The area around La Sorgente is dotted with tiny villages where shops selling homemade products largely outnumber supermarkets. Being an agricultural region, you’ll also find many wineries and olive oil producers that are still completely family-run and where you can get products that you won’t be able to get anywhere else in the world. Not even anywhere else in Italy.
More nature can be found in any of the three national parks of Abruzzo, like the mountainous Gran Sasso National Park of which it’s said that it’s the only place in Europe where you can ski while looking over the sea.
If you’re more into coastal nature (or sunbathing), the Adriatic coast is not much more than half an hour’s drive away. Here you’ll find picturesque fishing villages, an endless coastal cycling road, and the Lido Punta Le Morge nude beach. Also typical for coastal Abruzzo is the Trabucco, fishing machines. None of these are still in use, but some can be visited to get a demonstration of the ancient fishing techniques. Most others have turned into the most picturesque restaurants.

Back to where this blog post started. Dario and Lina are not just Italian, but also Abruzzian (is that a word?). Anyway, they are from the region and it often seemed like they know literally everyone and everything in the area. That’s a big advantage if you want to get to know the insides of Abruzzo. They brought us to places that the regular tourist would never find and pointed us towards restaurants, where few non-Italians have ever eaten.

As mentioned before, La Sorgente is a place where you come to relax and not one to have big parties. Although that too comes with a side mark. Dario and Lina are active members of ANAB (the naturist association of Abruzzo) and their property is sometimes used for get-togethers of the association members.
This was, for us, once again a great chance to learn more about Italy and about Italian naturism. By just hanging out with the naturists of Abruzzo (who are, by the way, some of the most welcoming people we’ve met during our road trip). And as it always goes in Italy, you can’t really meet people without sharing food and drinks. Where most other cultures shake hands, the Italians put a full glass and an overfull plate in your hands. We’re not complaining though.
Also important to mention is that pets are very welcome guests too. We can’t really remember whether Dario and Lina run an animal shelter, work at one, or support one, but that doesn’t really matter. Just know that they love animals and are happy to receive yours. 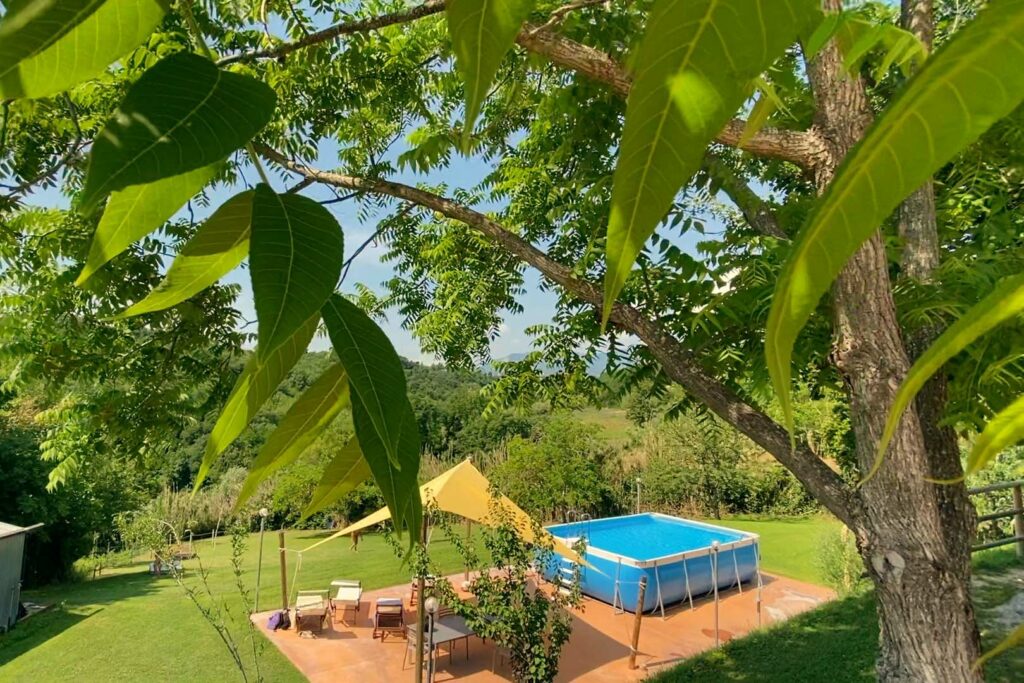 As there are only two apartments, it’s recommended to organize your stay upfront. Especially if you’re planning to visit during the summer months.

You can make a reservation via:

Languages: We recommend calling only if you speak Italian. If not, it’s better to use email or the contact form on the website.

If there is one thing we’ve learned during our road trip, it’s that there’s not just one Italy. Instead, there are lots of different kinds of Italy, which are all alike in a way, but also have many differences. We don’t want to tell you to stay away from Florence, Venice, and Rome, certainly not. But we will always remember our stay at La Sorgente as one of our most genuine Italian experiences. And we were naked most of the time, how cool is that?