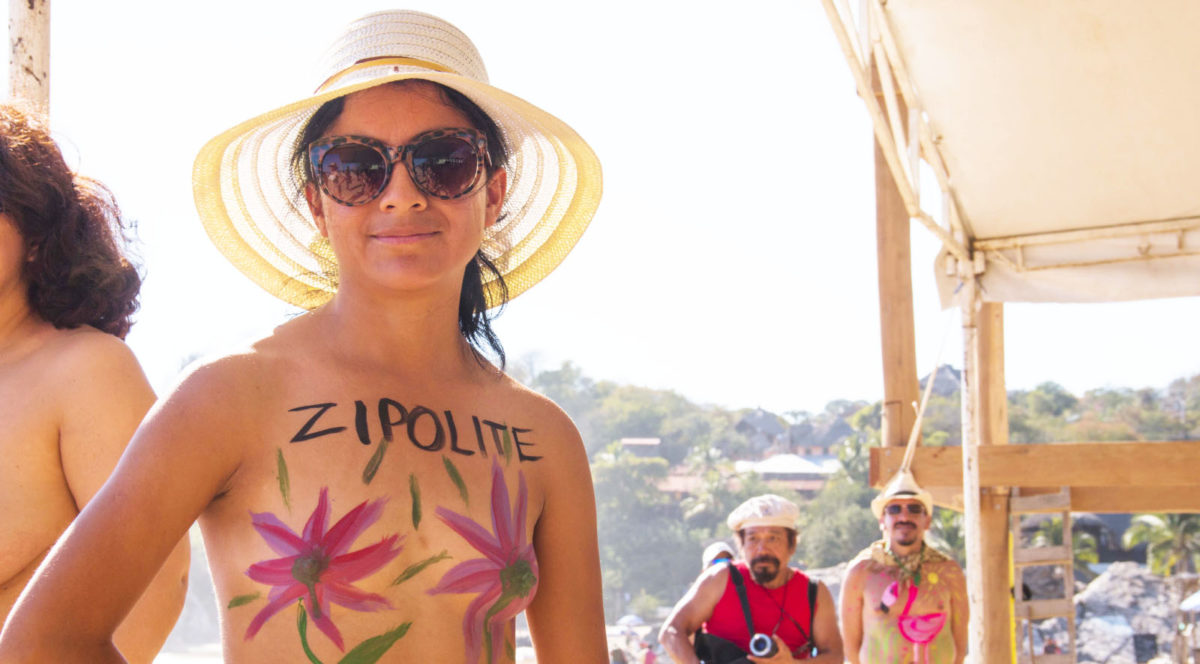 Ever since we fell in love with Zipolite in Mexico, we knew that this was a place to which we wanted to return. Especially since we also found out that this sleepy beach town does not only have a magnificent nude beach and several nudist resorts but is also home to Mexico’s popular nudist festival. Zipolite kept popping up whenever we asked ourselves the question “Where will we go next?”. The Zipolite Nudist Festival gained a very prominent place on our bucket list. It became one of those nudist events we just HAD to attend. And this year, the time had finally come.
A couple of months ago, we’ve already published a guide about everything you need to know before attending the Zipolite Nudist Festival. In this guide, we already explained what the festival is all about and how it became that popular in only a couple of years. We’re not going to repeat all of that. Today we are going to tell you how we experienced the festival. 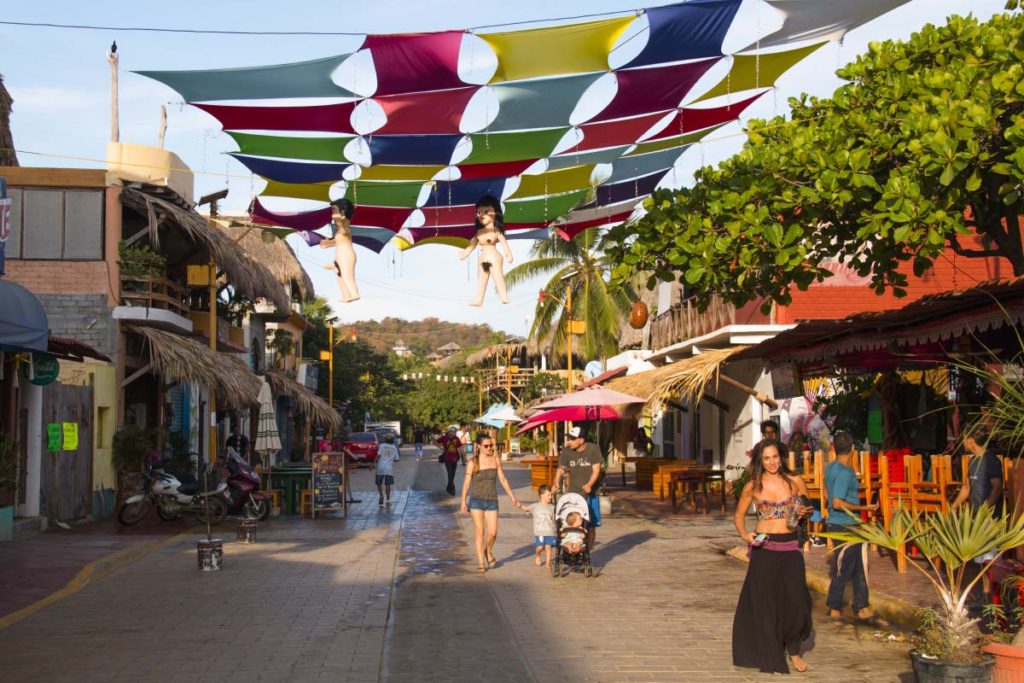 Honestly, we weren’t all too confident when the moment to return to Zipolite came closer. Of course, we had been looking forward to this day for a very long time. But on the other hand, the Zipolite we had fallen in love with was the one of 2 years ago. Meanwhile, this Mexican nude beach town has become increasingly popular, among both national and international nudists. Another aspect was that the last time we visited Zipolite, we were here in the shoulder season. The (figurative) heat of the high season was long gone, while the (literal) heat of the hot wet summer months still had to arrive.
We had fallen in love with a sleepy beach town, where we could spend endless hours on the nude beach, with not more than a couple handful of other friendly nudists. Where we could sip cheap beers and cocktails. Our own little paradise. Today, things would be different. We would arrive at the busiest time of the year. In fact, the three days of the festival bring in more than double as many visitors as any other given day.
A lot of weight fell from our shoulders when we arrived in town early in the morning. Zipolite was pretty much the same as we had left it 2 years ago. The same bars, restaurants and clothing-optional hotels in Zipolite were still there. The prices hadn’t skyrocketed. Some new buildings had popped up here and there and the number of other tourists was clearly more than we remembered. But definitely nothing shocking at all. Although we had barely slept on the night bus, smiles appeared on our faces when we wandered the empty main street at 7 am and tipped our toes in the warm sand of the beach. We were back. 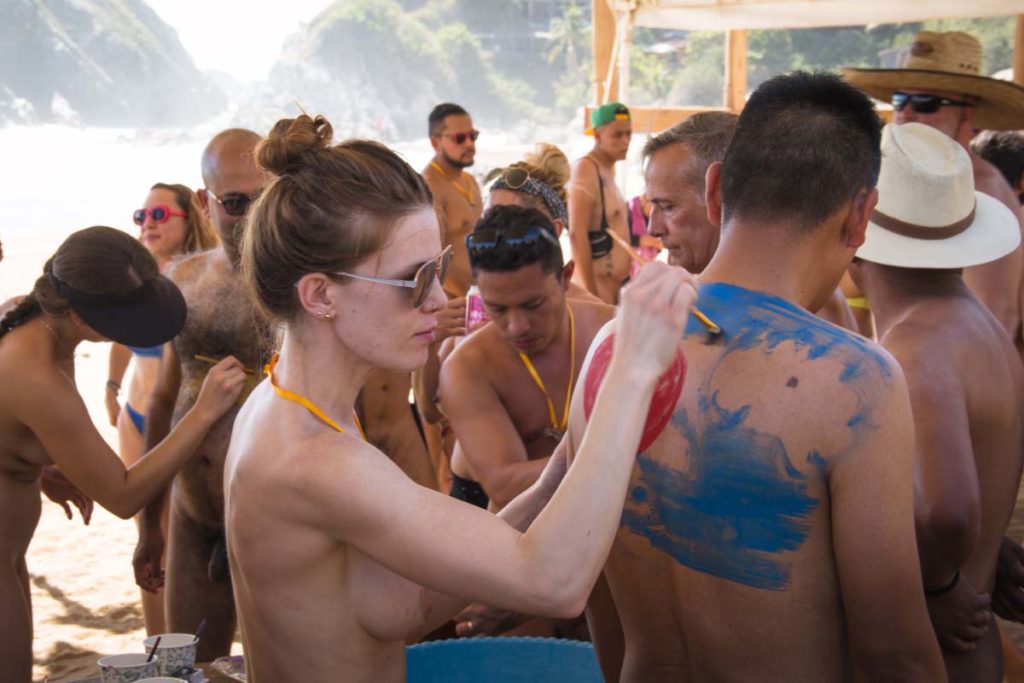 Getting ready for the Zipolite Nudist Festival (T-minus 1 day)

Although we had arrived in Zipolite a week from the start of the festival, and although the organizers were expecting about 8000 visitors this year, nothing in the village gave a single clue that something was about to happen. Nobody was putting up fences, setting up stages or dragged around sound systems or screens. The only indication could have been the constant influx of more and more visitors in town. More and more nude people on the beach. More and more people selling all kinds of souvenirs and bracelets on the main street during the evening.
Another sign was the much-expected exhaustion of the only ATM in town. Forcing us into a shared taxi towards nearby Puerto Angel to stack up on pesos. The ATM in Puerto Angel wouldn’t last very long either. When we went for another “money run” after the festival, not a single peso came out and we had to go all the way to Pochutla.
Anyway, the festival was about to start the day after and still there wasn’t a single sign of anything about to happen any time soon. If we didn’t take the many nudists and empty ATM into account. 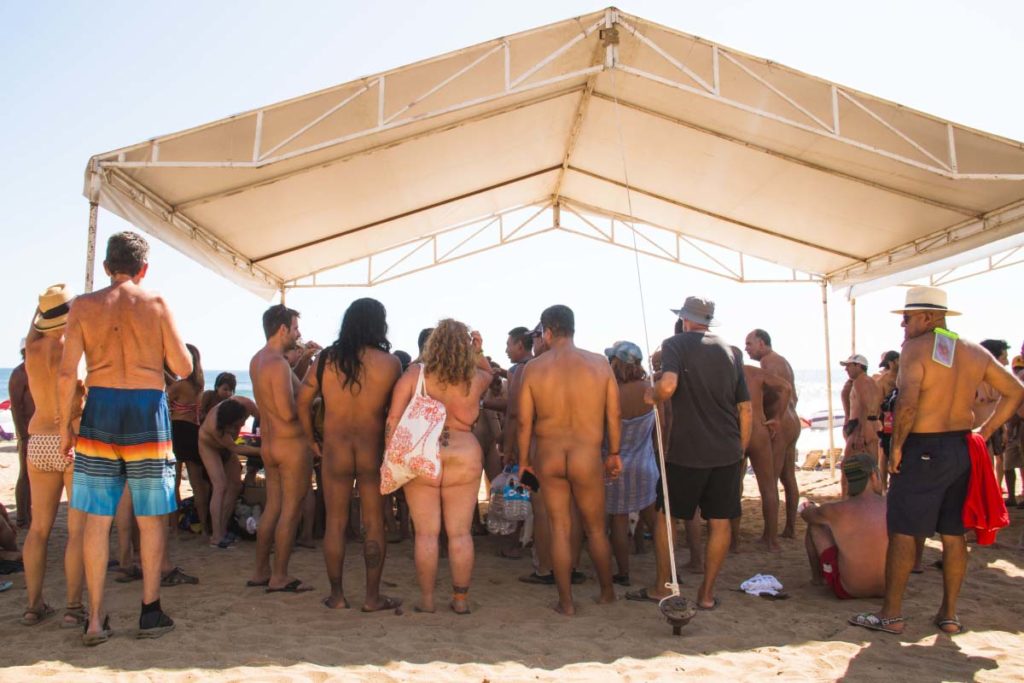 The Zipolite Nudist Festival typically takes three days, Friday to Sunday. Yet when we saw the activities schedule, apparently the start was this year on Thursday. For us, that Thursday started like any other day in Zipolite. Waking up, open the door, notice that it’s another beautiful sunny day and go to one of our favorite breakfast places. That’s when we got a real sign that the festival was about to start. We couldn’t get any coffee…
As of 9 am, the whole town was disconnected from the power grid. Reason: They were setting up the stage. A morning without coffee is definitely not our preferred morning. But at least things got moving.
Meanwhile, lots of our friends had arrived as well. There were Hector Martinez and his future wife and a whole group from Bare Oaks resort. Friends from Mexico, California, New York and Vancouver and new friends that we had made the previous days on the beach. We were all ready for the festival to start. But that didn’t really happen. 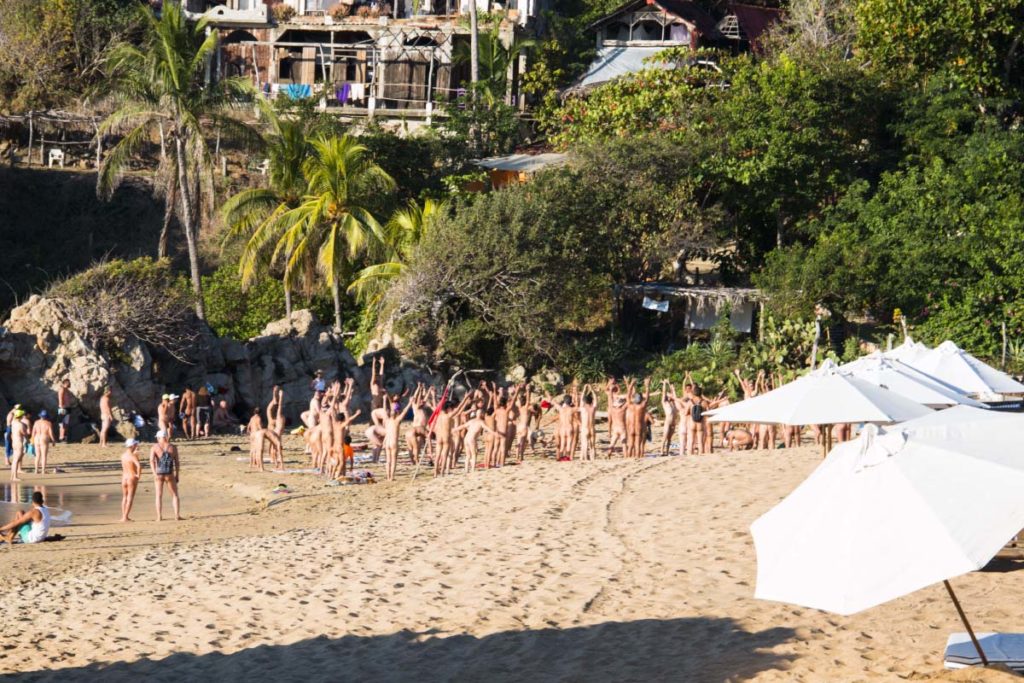 The Thursday of the festival means not much more than that the organizers and volunteers get together for beers and pizza. This is something we learned during the real first day of the festival. On Friday. Meanwhile, streams of visitors kept coming in. While most of the international nudists (like ourselves) arrived several days before the festival, many local nudists just came for the weekend. Zipolite was becoming very crowded.
Since the festival was the main reason why we came back to Zipolite, we had decided to enjoy it to the fullest. We would participate in every activity. So on Friday morning, we arrived at about a quarter past eight at Shambala beach for the morning yoga. Genuinely surprised by the number of people that had already started with the session. How on earth did this happen? We were only 15 minutes late and this is Mexico. The country of “mañana”. Soon we would learn that this was indeed an exceptional case.
Learning from our mistake, we arrived at the meeting point for the volleyball tournament at a quarter before 10. There were no organizers, no volunteers, not even a volleyball net. Not even a ball. 10 am came. So did 10:15 and 10:30. Not a single sign. When we messaged one of the organizers for a status update, he told us that they were trying to locate the net. Something that apparently took a lot of time. By noon we gave up. Later that day we would hear that the tournament actually did take place, at 2 pm at a whole other spot on the nude beach.

The volleyball tournament appeared to be a portent for the remainder of the festival. Some activities did happen at the announced time and place. Yet, the majority kept moving in time and space or never happened at all. Except for the main stage, which had bands and DJ’s programmed every night that actually showed up and did their thing pretty much on time.
All of this may sound like a huge failure of the organization and the beginning of an unfortunate downward spiral. At least, that’s what we thought when neither the volleyball tournament or the flying of the kites got off the ground. Only during the second day, we realized what the Zipolite Nudist Festival really is about. We had completely given up on trying to attend activities, but instead, we just spent our time on the nude beach. Meeting up with old friends while making new ones along the way.
In Mexico, as well as in many other parts of the world, nudist events are typically happening on a small scale. 100 participants, maybe 250. A nudist event with 1000 participants is in most places considered a huge success. The Zipolite Nudist Festival had 8000 visitors. Few nudists have ever had the opportunity to be in one place with so many other nudists. Have ever had the chance to meet so many other nudists in real life. The majority of the visitors didn’t really care about the activities at all. The social aspect is the most important and guaranteed the success of yet another edition of the Zipolite Nudist Festival. 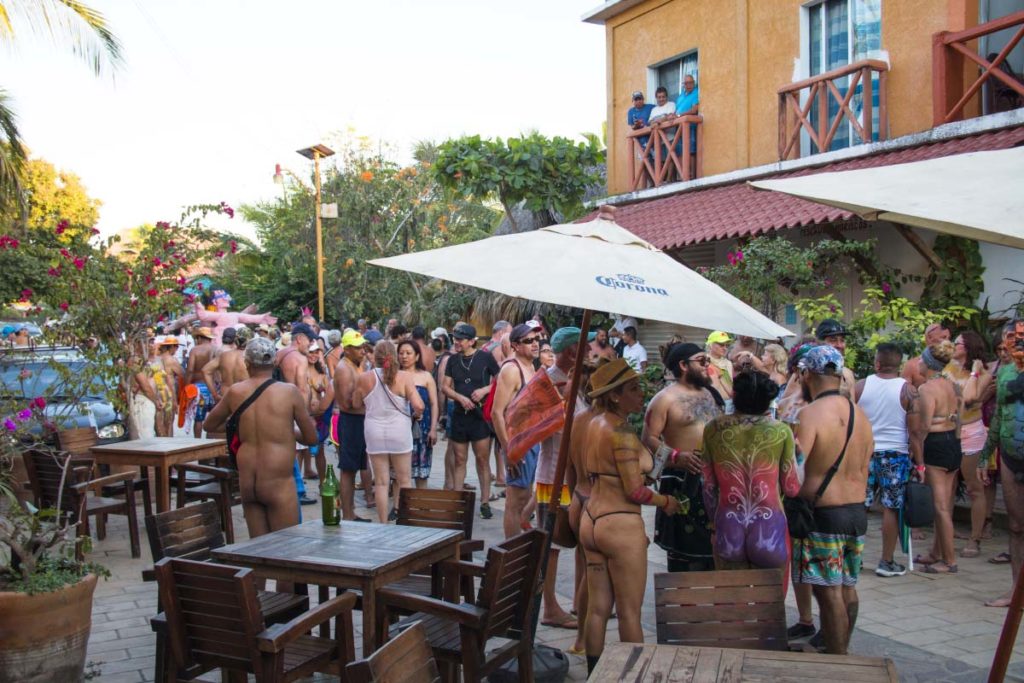 When the festival is over (T-plus 7 days)

The nude masses disappeared as quickly as they had arrived. One week after the festival, not a single sign was left of one of the largest nudist events in the Americas. Most of our friends have left and Zipolite is back to its original self. A sleepy Mexican town that happens to have an amazing nude beach.
One of the most memorable activities during the festival (which actually did happen) was the “Calenda”. A walk from one place in town to another, a typical thing that Mexicans do during any kind of festival. Although it’s made very clear that nudity in Zipolite is only allowed on the beach and in the private places that agree with it, for many, the Calenda was the perfect opportunity to push the limits. During the walk, nude bodies could be seen wandering through town.
We’re still not sure whether this is a good or a bad thing. Of course, it would be amazing if Zipolite became a real nudist village. Allowing nudity all over town. But on the other hand, most of the town’s inhabitants are not nudists. They (or their families) have been living here from way before Zipolite became a nudist destination. They already let us use their beach without clothes. Should we really ask for more? Risking that at one point they’ll say “that’s enough with the naked people, go do your thing somewhere else!”. 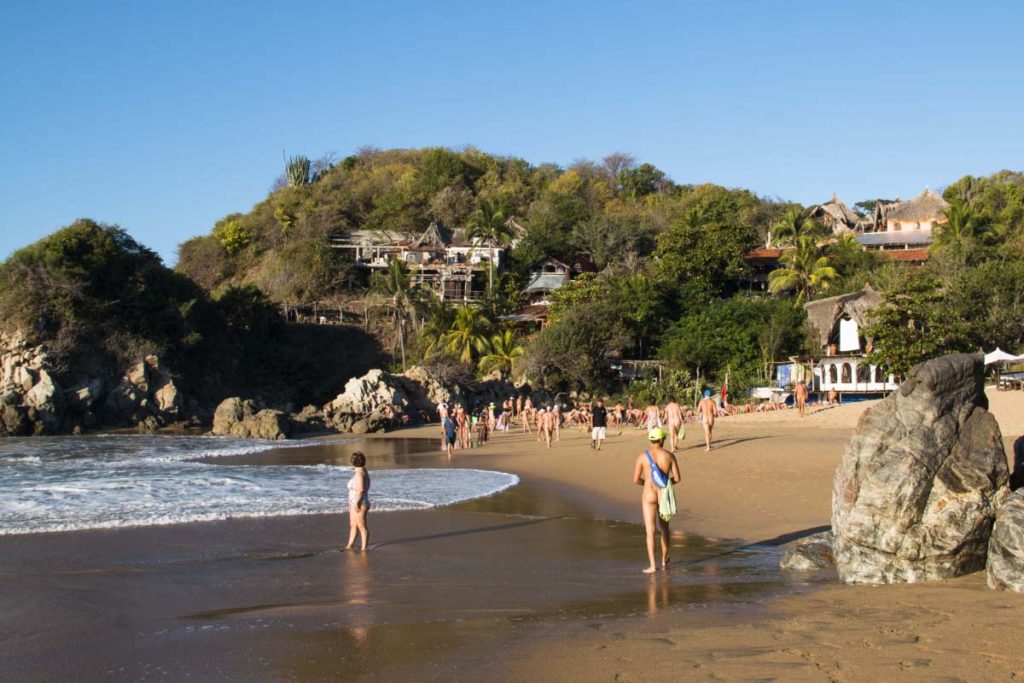 The festival was very high on our bucket list, if not number one. Now the question arises whether we’ll keep it there. Whether the first couple of days of February will become permanently blocked in our calendar for years to come.
Today, we are not sure about this. Although the festival was an unforgettable experience, this was not the Zipolite we fell in love with. Although we got the chance to see many of our nudist friends from all over the world, we shouldn’t need a festival to catch up with them.
Today, the Zipolite Nudist Festival is added to our “been there – loved it – but done it” list. But that’s today, only T-plus 7 days. And we’re still in town. Sooner or later, when we’re in faraway places, we might start longing for Zipolite once again. And the nudist festival might be the perfect reason to return.
Naturist Destinations ➡️ Mexico ➡️ Zipolite

2 thoughts on “The Zipolite Nudist Festival 2020: Our Experience”