It was a sunny day with not a cloud in the sky when we arrived in the beautiful Andalucian city Granada. Don’t you like it when a blog post starts like that? But wait. It was late January and Granada is in the mountains. A clear sky doesn’t mean much in such a context. This was exactly what we found out when we got off the bus and immediately dove into our luggage to search for the warmest piece of clothing that we could find.
We had definitely left the warmth of the Costa del Sol behind us as soon as we had driven inland. But that didn’t really matter. The highlight of our stay in Granada was an indoor activity anyway. And one that until recently we would have never believed that it was possible.

Do we really want to wear a bathing suit in a spa?

As Belgians, we are lucky to have a sprawling spa culture. One where bathing suits are not allowed (except on a handful of specific “bathing suit days” per month). It’s a tradition that has blown over from Germany and is currently also common practice in The Netherlands, Austria, and several Eastern European countries. But as soon as you enter France or any of the more southern countries, a naked spa is something you’ll only find at a naturist resort.
When we were researching what to do in Andalucia, many travel blogs told us that a visit to an Arab bath was a must-do on our itinerary. They are a part of the Moorish history that is still standing strong and are often located in scenic locations with traditional decorations. The idea was tempting. We love a day at the spa. But the thought that we would have to wear clothes was quite discouraging. Once you’ve tried bathing naked, there really isn’t a way back to the swimsuit.
The thought of soaking in warm water, getting steamed up in a hammam, and maybe a good massage didn’t leave our minds though. So we started looking at the websites of different Arab baths around the major cities of Andalucia. That’s when our eye suddenly fell on the magic words “sesiones nudistas”. Nudist sessions. Apparently, there was a place in Granada called Baños de Elvira, which organized naked sessions twice a month. A few days later we would find ourselves searching for clothes in the bus station of Granada, only to take them all off again a couple of hours later. 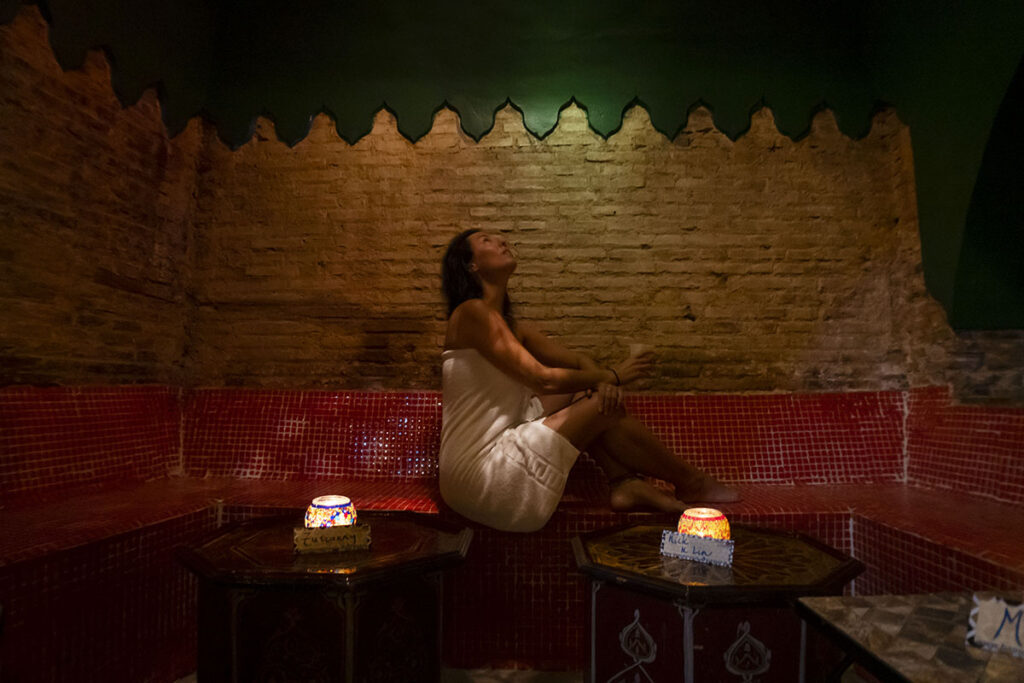 A spa all for ourselves

Baños de Elvira is an established name in the Arab bathing culture in Andalucia. The place is a combination of a Spanish hostal with a traditional bath. When we emailed the owner to make an appointment for the spa, he easily convinced us to stay at the hostal as well by telling us that we could then just go from our room to the spa wrapped in a towel. That way we wouldn’t even have to think about clothes.
We were definitely going to have a unique experience here, one that we wouldn’t want to miss for the world. But also one that we really wanted to share with you, our readers and viewers of our videos. This is where the main difficulty of being naturist content creators popped up again. We imagine that the bathing suit-wearing visitors of these baths would probably not be all too happy with us running around with cameras. On the naked days, this would definitely be a big NO.
We explained this situation to the owner. We told him how we would love to make videos and take pictures to share with you. He came up with a solution. Just before opening time, we could get the bath an hour for ourselves to film. A couple of days earlier, we had still been considering whether we wanted to go to a bathing suit obligatory Arab bath. Now we would not just be able to visit the bath naked, but we would also have the whole place for ourselves. 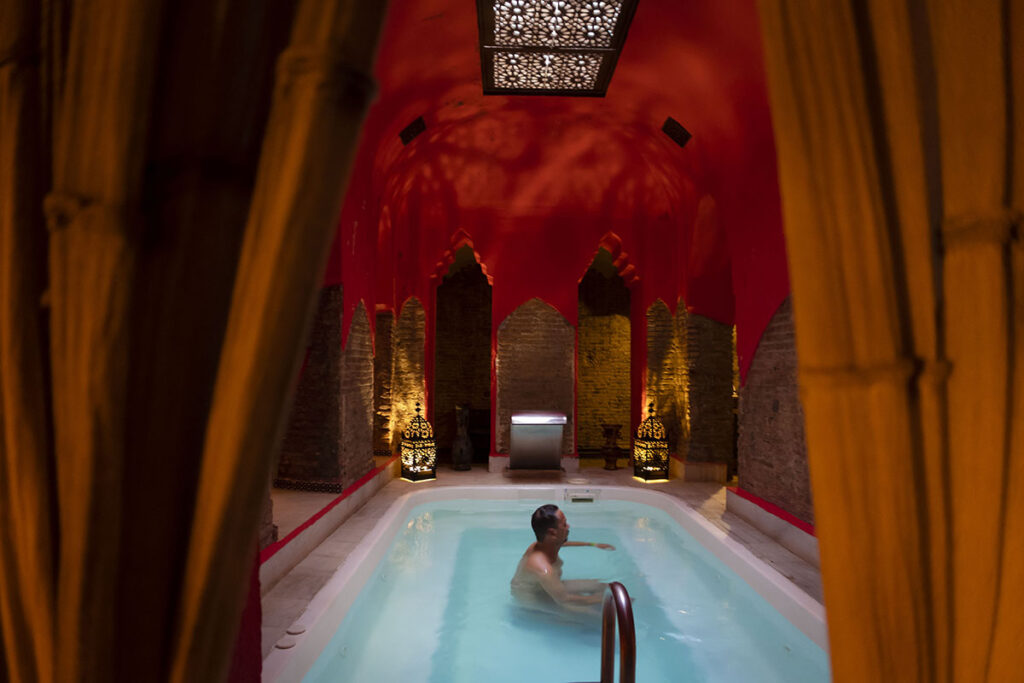 We could try to tell you what the bathing house looks like and how we kept ourselves busy during that morning hour, but you better just watch the video for that. Shortly summarized, it was a great experience. The bloggers had been right that this is something not to miss when you’re in Andalucia, and we were so happy that we could enjoy it in our own clothes-free style.
The real naturist session, however, would follow that same evening. Then we would have the chance to experience what it really feels like when there are other guests (and no cameras). There were 3 other couples that evening, which doesn’t seem like much but if you know that the maximum occupancy is about 10-12 people at a time, this was almost a full house.
What really amazed us though was that all the other couples were more or less our age. This shouldn’t have come as such a surprise because also in Belgium the spa is more popular among younger people than the nude beach or the naturist campsite. But yet, it was something we didn’t expect. Does this mean that clothes-free communal bathing could also be a trigger for the uprise of social nudity in Spain? We can only hope so. 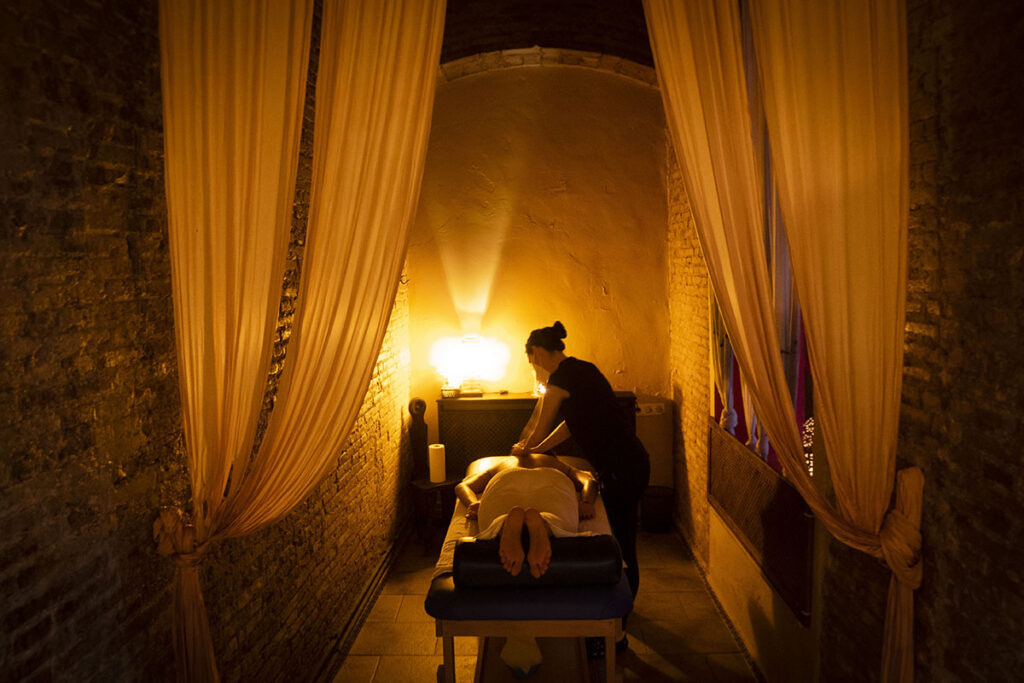 At the time of writing, Baños de Elvira has “nudist sessions” on two days per month, every first and third Tuesday. So if you want to experience this as well, make sure to plan your trip accordingly. As far as we know, this is the only place in Andalucia where you can experience an Arab bath session without having to wear a bathing suit.
More info can be found on their website: http://www.banosdeelvira.es
That day, Granada was catapulted into the top of our favorite cities in Spain. Not just because of the naked Arab bath experience. It’s such a beautiful city, rich in history and culture, and with excellent food. Our visit to Baños de Elvira was just a very big cherry on the cake.

2 thoughts on “Naturism in an Arab Bath in Andalucia”