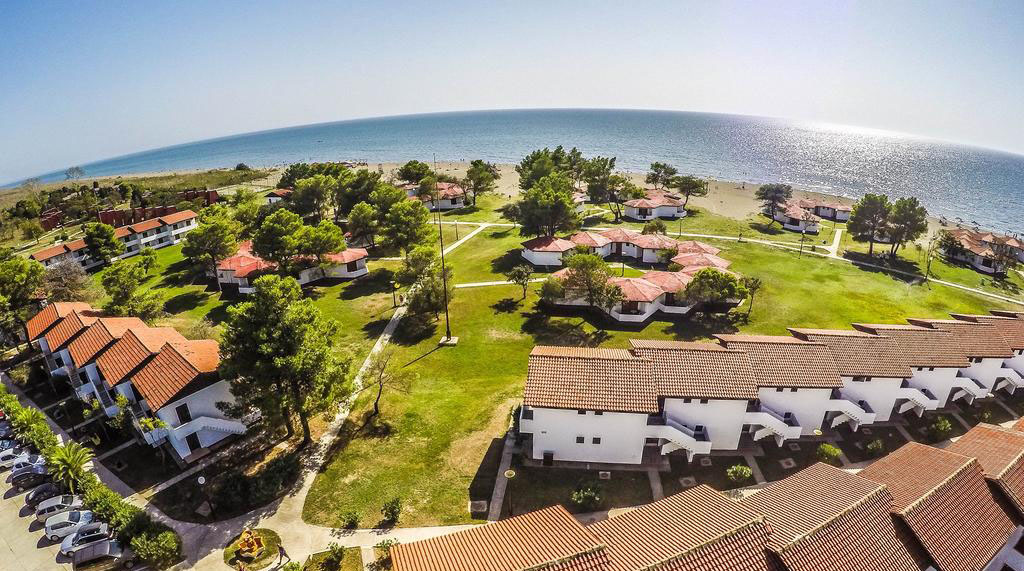 Talking about a culture shock… The difference with naturist campsite Full Monte, our previous stop in Montenegro could hardly be any bigger. Only the morning before we had packed our tent from the shady spot overlooking a flower garden and now we had arrived on… well, the best way to describe this campground is just “a field”. Maybe we had been spoiled at Full Monte, but our first impression of the FKK Campground on Ada Bojana island wasn’t exactly spectacular.

How to get to FKK Campsite Ada Bojana

Ada Bojana is an island, on one side there’s the Adriatic sea and the rest of the place is surrounded by a river. So technically it’s indeed an island, but one you can access by crossing a small bridge.
The island is located next to the border of Albania, so to get there you have to take the main road from Ulcinj to Skhoder (the Albanian city, not the lake) and follow the signs from there. If at a certain moment you feel like you’re in some kind of no man’s land, you’re on the right way.
Once you get closer to the island, you’ll see the big signs at the side of the road advertising the FKK campground and when you actually crossed the bridge, just keep driving and you’ll end up in the camp. 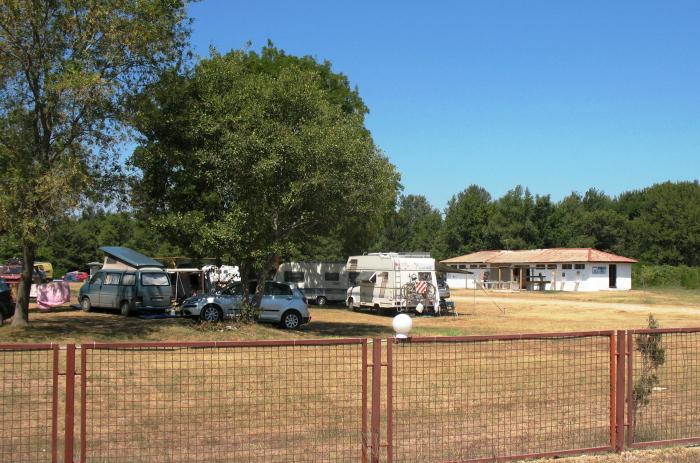 Where to stay at FKK Campsite Ada Bojana

The place is literally called a naturist campsite, but it caters for all kinds of visitors. On the part closest to the sea, you can rent apartments or very strange-looking iron huts. We decided to stay on the other part of the camp, the “real” campground, the field.
Ada Bojana island was the first place where nudism got a foot on the ground in former Yugoslavia, and the whole place looks like since those days not that many investments have been made. It’s all a bit rundown.
The naturist campsite is a huge grass field with in the middle a big shower slash toilet block. And that’s it. There are no marked spots, so you can put your tent, camper, or caravan wherever you like, which gives the place something wild, something lawless. It did remind us a lot of a festival campground, including loud music and drunk voices during half of the night and the smell of human waste in the morning.

What to do at FKK Campsite Ada Bojana

This part of the review will be pretty short, unfortunately. There are a shower and toilet block with about 10 open showers and 20 toilets. In the showers, you’ll get warm water if you wait long enough and if nobody else is showering at the same time. In the toilets you’ll get toilet paper is you’re lucky and if the cleaning lady likes you.
Oh and there’s wifi. For one Euro you’ll get 12 hours of internet connection. But before you start thinking about watching the latest episode of Game of Thrones, know that you’ll get what you paid for. Little. At the moment of writing, we’ve been trying to connect to the wifi for about 45 minutes without success. We hope to be able to check our emails and maybe post a picture on Instagram before we run out of time.
There’s also a mini-market on-site where you can buy food and drinks. 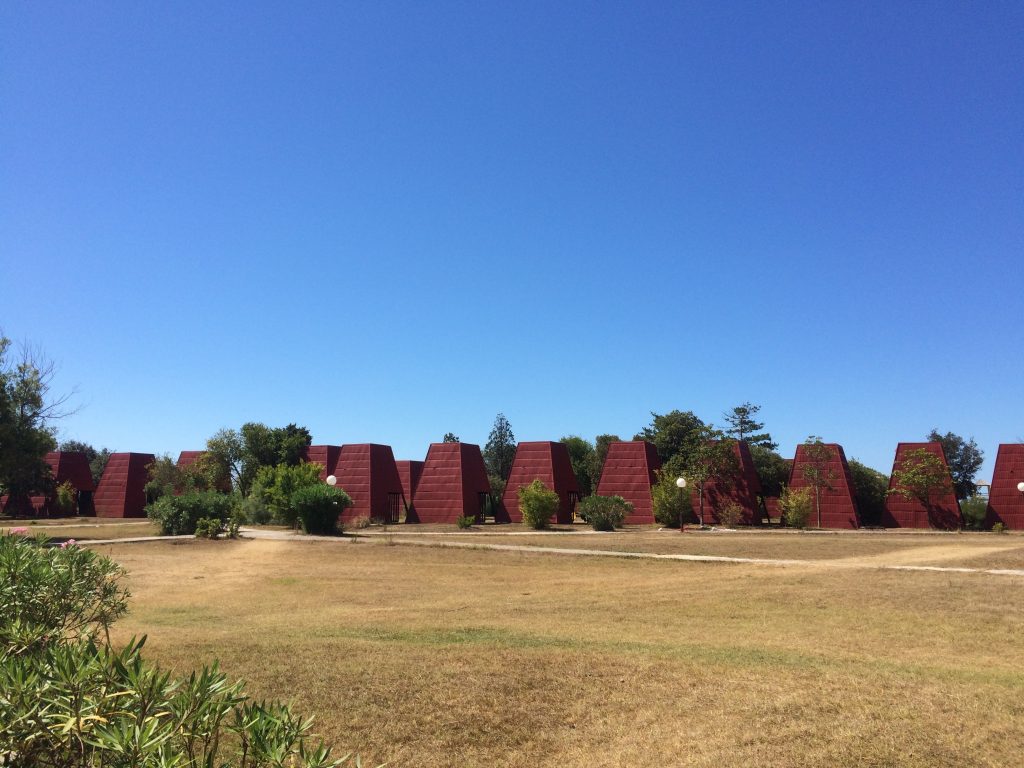 The main reason why someone should consider staying in this place is that it’s the only naturist campsite option on Ada Bojana island. We’re not going to tell you very much about the island right now because we’re planning to write a separate post about it, but we can already say that it’s certainly worth the visit.
Other than the island, the city of Ulcinj is very nearby and if you don’t mind driving a little further, you could do a day trip to Bar, Montenegro’s capital Podgorica, Lake Skhodra, or even the city of Skhoder in Albania.
But most visitors don’t bother leaving the island and prefer to hang around a couple of days enjoying the nude beach and the relaxed atmosphere.

In the beginning, we found that the staff was pretty rude, or just bored. But probably the guy behind the counter was just having a bad day. Afterward, we did get plenty of information and the receptionists were always helpful. One guy even picked us up when we were hitchhiking back to Ulcinj. The guys running the mini-market were an exception, they were grumpy every time we went to buy something.
And then there was the cleaning lady!
She’s an elderly woman who lives in the shower block (we kid you not) and spends her days cleaning, hanging around, and playing with the cat. On the first evening of our stay, Nick accidentally entered the wrong door when searching for the showers and stood in the middle of her “living room”. The woman was surprisingly calm given the fact that there was a naked (and half-drunk) man in her house at 10 pm and guided him to the right door. Since then we have a connection and she waves from far away whenever she sees us. And in the morning she gives us a fresh roll of toilet paper. 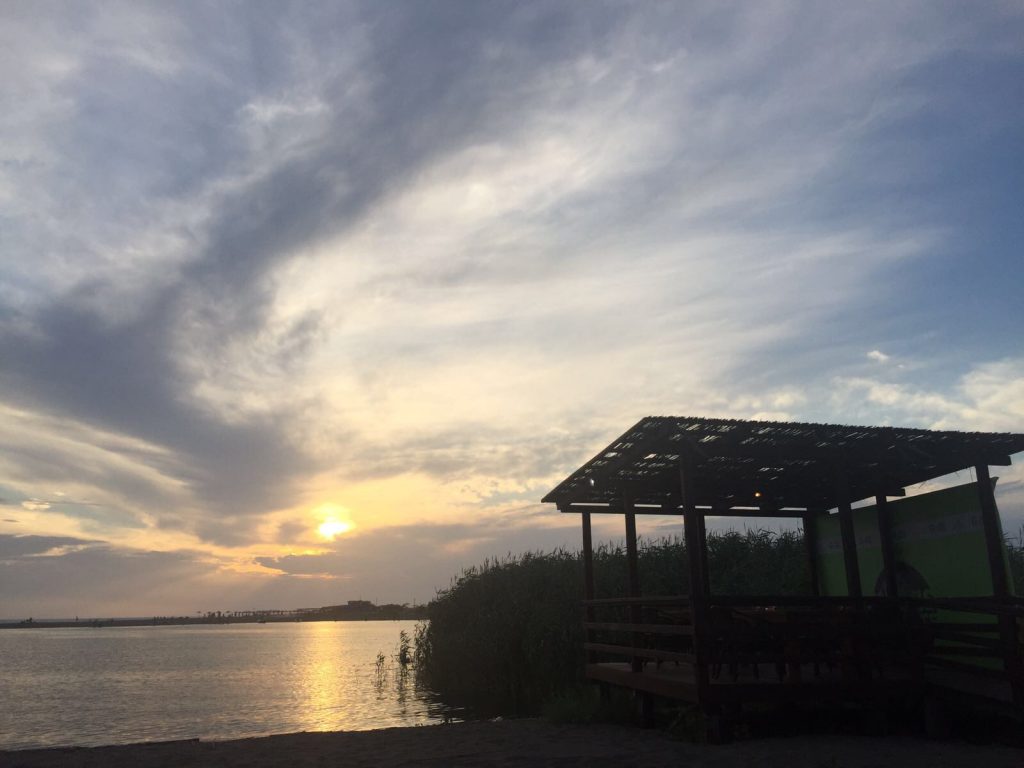 Even though it’s called an FKK campsite, certainly not all guests are nudists. We would say it’s about 50-50. The main reason for this is that the island, next to its nude beach is also a famous spot for kite and windsurfers or for groups of friends to hang around on the beach for a couple of days. Since the FKK campground is the only place where you can camp on the island, everyone is of course staying there.
But nobody seems to bother. The nudists are nude, the non-nudists are clothed and everyone lives in harmony next to each other.
Somewhere along the way from Herceg Novi to Ada Bojana we seem to have crossed an invisible tourist border. Where in Herzeg Novi the majority of the tourists were Western Europeans, there are few of those left at Ada Bojana. We did spot an occasional German or Swiss license plate, but most visitors come from other Balkan countries. The place is popular among people from Montenegro, Bosnia, and Serbia.

If you’re the type of traveler who goes camping for the atmosphere at the campgrounds, this place is nothing for you. The only reason why people come here is that it’s the only option to camp on Ada Bojana island. And the management seems to know this, why would they do any investments if people will keep coming anyway. The camp really has the possibility to be turned into a nudist’s heaven, if someone wanted to invest the money.
Read more about this place on NUDE
More info and reservations: FKK Resort Ada Bojana
Naturist Destinations ➡️ Montenegro