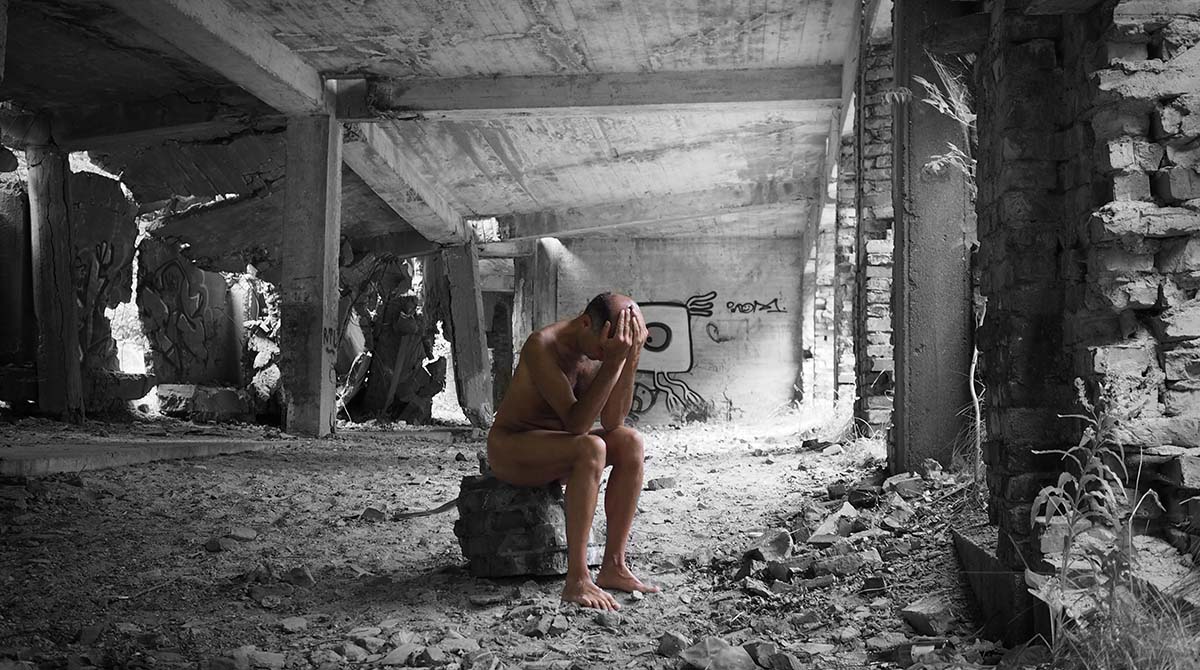 Naturism is a wonderful lifestyle that started in Europe but is now expanding towards the whole world. Most of the time we share our own views on the different aspects of nudism but once in a while we like to pass the mic to hear about how someone else’s experiences.
Our guest for today is Alex from Germany.

Hello Alex, tell us something about yourself

I am 49 years old, married, father of two kids (17 / 15 years) and the four of us live in the south of Munich, Germany. I studied Physics, even earned a PhD, but turned then away from research and have now spend about 20 years as a product manager in the telecom industry. The benefit of being in such a highly competitive industry is that work life is very modern and dynamic.
I am into photography and love to travel to foreign countries with my family, and enjoy the opportunities offered through business trips like Japan or Iran. We just talked about what our favorite destinations were, which included Australia, Georgia and Israel. We also do a lot of sports nowadays.
As it is tied to my nudist life I mention that I suffer from a chronic disease called “Alpha1-Antitrypsin deficiency”. That is a rare disease, which typically affects the lungs, but in my (even rarer) case the liver. I am engaged in a patient group and founded a local self-help group. 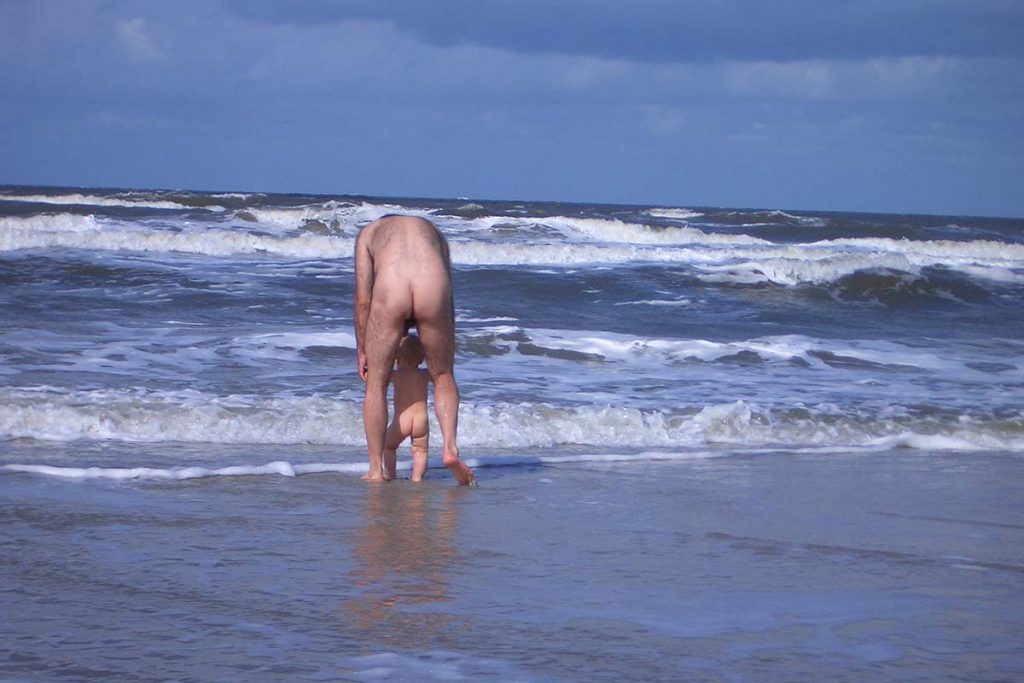 That story starts like many others – my parents took me as a child in summer to a nudist beach, but with starting puberty I became too much ashamed of myself and so they stopped going there (sorry for that!). By the age of 17 or so I felt very unsure about myself. I registered the looks of the others as my body hair was really untypically strong. But one day I was too tired of suffering and went to a lake with a nudist section to fight fire with fire. Crazy idea. In the beginning it was terrible, but after laying on my towel for some 20minutes I cooled down. Then I started to experience that the other nudists did look at me, but in a different way than others. I did not feel any special. This group of people felt a lot more relaxed than the crowd in the public baths. Being outside in the nature was also much more appealing than avoiding to step in ice-cream or being stuck with a loud group next to you.
Well, outside of the nudist area I was still too ashamed to spell out that I go there. After many years of this secret life, I put this picture up in our flat together with other impressions of a stay at the North Sea. Of course, it drew attention and earned smiles from friends. Remarkably only our female friends reacted – the men pretended to not see it, which I still do not understand, but anyhow. The secret was no longer a secret. And there was no problem about it.
A kind of outing was my participation in the Spencer Tunick photo shoot in Munich. I was looking forward to the experience of being painted all over and participating in an art project. But 6 weeks before that I found myself for a week in intensive care. I lost more than 10kilo and suffered a lot. But I wanted to return to life and the event was a good deadline to work against. – I thought that I would be one of hundreds, but I needed to learn that Spencer came with assistants who took a lot of making-of pictures. And right in the first pose a photographer took a full front shoot of me. In the first moment I thought I’d drop dead. But actually all the adrenalin washing my body also gave me strong feeling of being alive! I recognized that I recovered. I was where I wanted to be. And this photographer selected me, not the guy left to me or the lady right to me. I was for the first time really proud of my body and understood how much I can rely on it, and that I need it. On the open air after-party they displayed exactly this picture with a projector – and I became even more proud. 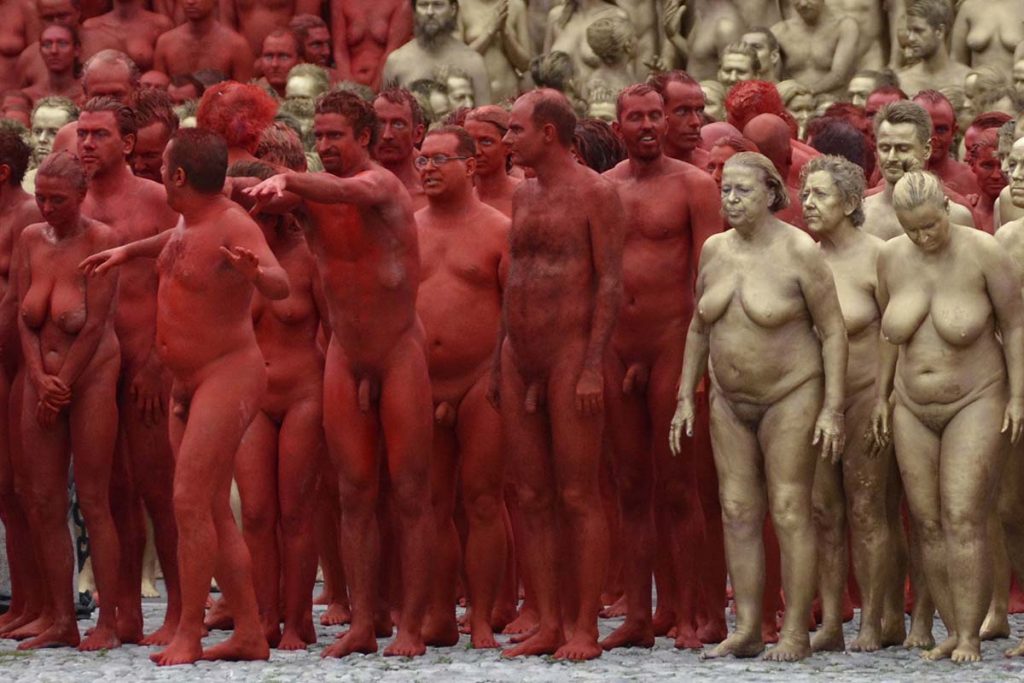 That is a question I got recently asked in an interview! Yes. I did dare to go into that situation. An English film production team did look for a nudist to give an interview in the English Garden about the nudists there. These 2-3min would run as a part of a travel series where they want to highlight the lifestyle of different cities opposed to the typical go-to-sites. The concept did sound interesting and the fact that a famous actor Sir Tony Robinson (for the ones who haven’t heard of him before: He started his career in a movie with John Wayne and became famous for being e.g. the sidekick of Mr. Bean) was making the interview made me believe this is a unique opportunity, a challenge, but also a potentially rewarding new experience and a good way to give credits to the city of Munich allowing nudism in its centre. 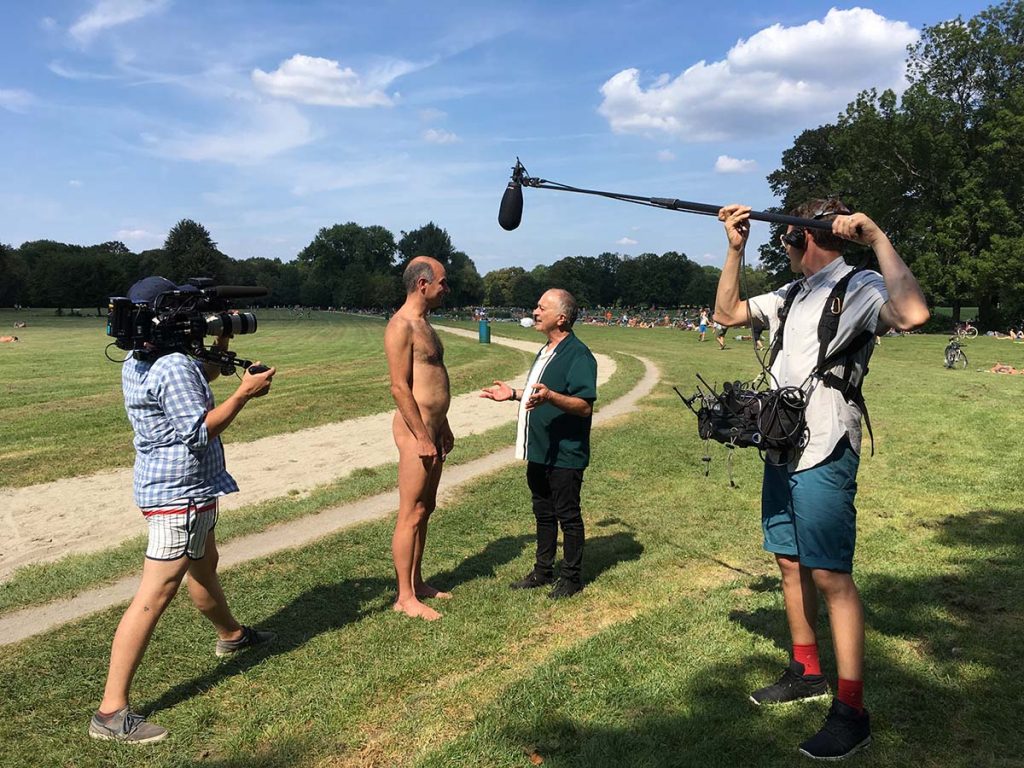 Back to the question: Naturism is allowed in Germany. There are places, where it is specifically allowed, and then there are places where it is tolerated. In general, you are allowed to be naked – until someone complaints. Well, respect for the others is the limit to the freedom you have. I experienced nudists always as respectful and sensitive people.
My favorite place for being nude is the river Isar in Munich and the Baltic Sea. This summer I went skinny-dipping and swimming by going for nude jogging on the shore at sun rise. There were already strollers, most of them spent a friendly “Hello” and smile, others covered up. I did also my Yoga/Pilates in the buff. And need to say, doing sports naked is great. Either you spend a fortune on high performance textiles to enjoy a good body climate, or trust in what nature gave you – the skin. It does actually better! 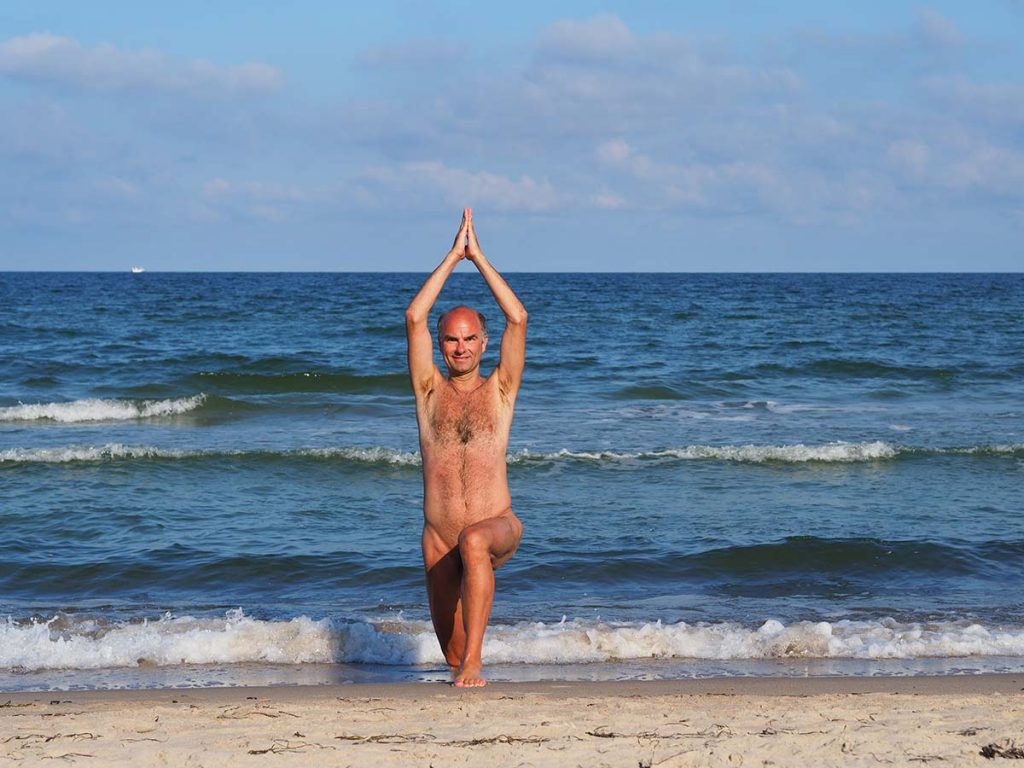 In the interview I introduced myself being a nudist – which was a pretty liberating moment in my life saying that while being naked on TV. But otherwise I stay away from the almost ideological debate about nudism vs naturism. I agree to your view that there are so many forms of nudism as there are people.
The German language gives actually two more options! “FKK” as a short form of “Frei Körper Kultur”, translated literally: “Free Body Culture”. Originally it was called “Nacktkultur” or “Culture of being naked”. I like this term better as it brings it to the point. However, it did embarrass too many people so it got changed to FKK. Remarkably you can use it in German language also as a verb “I am doing FKK”. Sounds like bureaucratic language, doesn’t it? OK, I accept the benefit of being language wise more neutral.
To me the best word is the Bavarian “Nackerter” or “A naked guy”. It comes with a twinkle in one’s eye, which makes it sympathetic and it does not imply anything besides say that there is a person being naked. That’s all. And that’s enough. 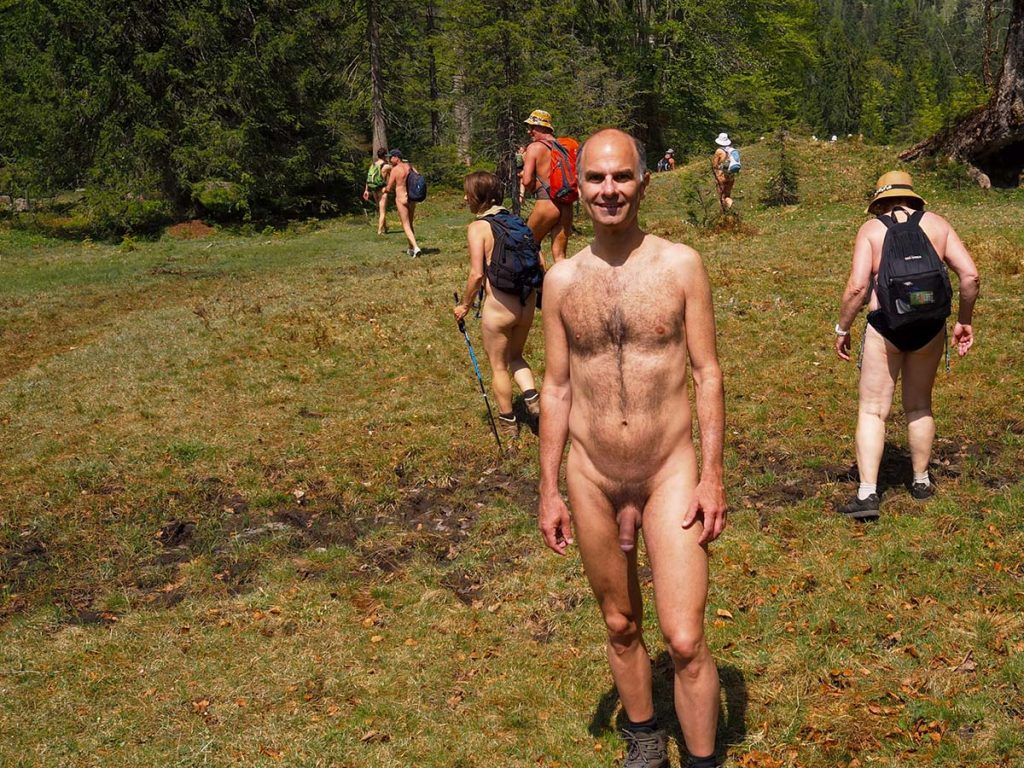 Actually not, but that applies to other situations as well. To change that I joined an online group of local naturists. I joined them on a naked hike in the alps. That was a full day 15km tour, going up and down 700m. We were a group of 26 nudists with a good mix of age, gender and freshness/history in nudism. I was positively surprised how easy it is to talk to other naked people, not only about our joint passion, but also about life in general. You can get personal much quicker than in clothed conditions. My wife was actually not sure what to think about this before, but as she saw how relaxed and happy I returned she accepted me joining the group also in future.

Just try it! Look for a nice place. Listen to your inner voice, if you better do it on your own, if there should be other people around you. Or if you want to be tied into a group activity like a sauna. Take your time. Everybody will accept you as you are! Nobody expects anything from you. You cannot do anything wrong.
But – you will face yourself! That is never easy, but if you manage to stand your own reflection, you will reward yourself by getting emotionally more stable and more self-confident in all situations of life.

Thank you so much for your participation Alex!

1 thought on “The Naturist Talks: Alex from Germany”