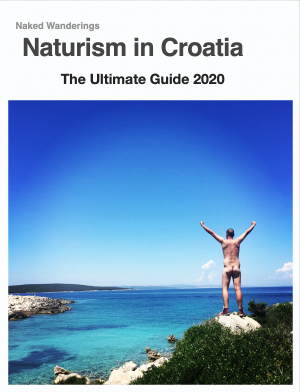 Made with love by naturists for naturists.

Explore the naturist options in Croatia

Naturist camping in Croatia is almost as old as naturism itself. From way back in the former Yugoslavian times, nude beaches in Croatia were crowded by both locals as tourists.

Today this results in some of the most beautiful naturist resorts and clothing optional resorts in Europe.

Large naturist campings (or FKK campings as they are often called here) are spread along the coast and especially at the islands and the Istria peninsula.

Then there are some of Europe’s most amazing nude beaches, spread along the coasts of Istria, the mainland and the Croatian islands.

Because of its location and its mild climate, Croatia is a popular destination for naturists from Slovenia and Hungary as well as Germans, Austrians and Dutch.

Ancient cities and natural beauty also make Croatia interesting for naturists who don’t want to spend their whole holiday with their naked behind on the beach.

How this guide will help you

✅ Get an accurate map with all the naturist resorts in Croatia.

✅ Get an overview of the best nude beaches in Croatia, and tips for nearby accommodations.

✅ Get detailed information about every naturist resort in Croatia, including availability and contact info.

✅ Read complete reviews of the naturist resorts that we personally visited.

✅ Get ALL the essential information about visiting Croatia. How to get there, what to eat, the best time to visit, visa regulations and much more.

✅ Find the best resources for organizing your vacation to Croatia.

✅ Get lots of insider tips and tricks to make your naturist vacation in Croatia one of the best ever!

Extras in this guide

💚 A complete review of camping Baldarin on Cres island

💚 A detailed overview of the nude beaches on Murter island

💚 A detailed overview of the nude beaches in the Dubrovnik Rivièra

💚 How to have naturist vacations on a budget

Made with love by naturists for naturists.