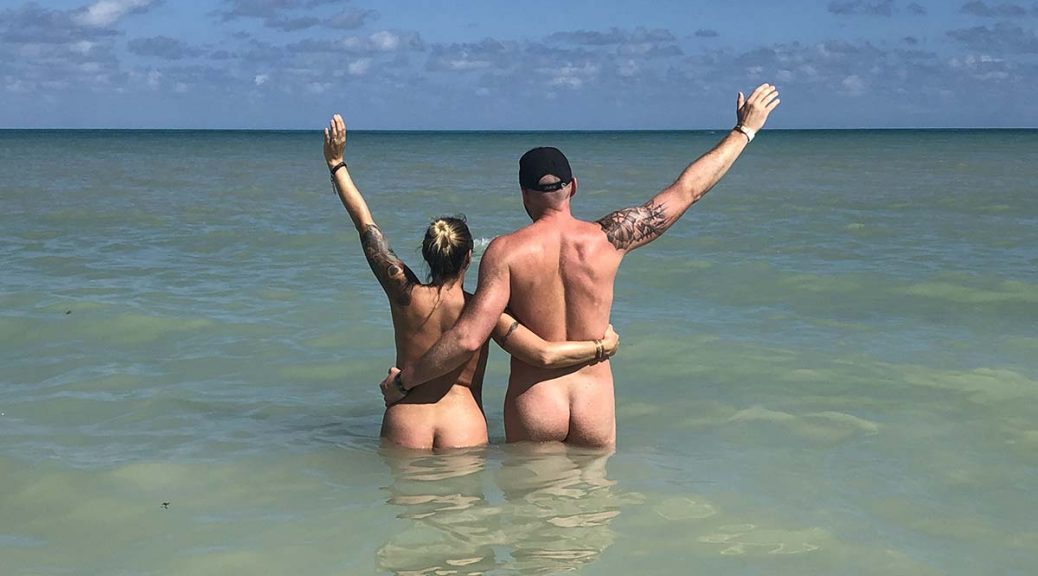 Naturism is a wonderful lifestyle that started in Europe but is now expanding towards the whole world. Most of the time we share our own views on the different aspects of nudism but once in a while we like to pass the mic to hear about how someone else’s experiences.
Our guests for today are Chris and Rhonda, naturists from Canada.

Hi Chris and Rhonda, tell us something about yourself

We like to consider ourselves a still somewhat “young-ish” couple from Alberta, Canada. We’ve known each other for over 20 years, and have been very happily married for almost 7 now, which has led to a fun, but often a bit crazy, family of 5. Health and fitness is a priority in our home because we like to keep active, but we also have to keep up with the kids! We both work full-time jobs, but our schedules often leave us lots of time to enjoy our lives. Camping, ATVing, fishing, travel, etc keeps us out of the home most of the time, except during these ruthless winter months! Can’t wait for some heat! We’re very happy with where we’re at in our lives, and enjoying every bit of it! 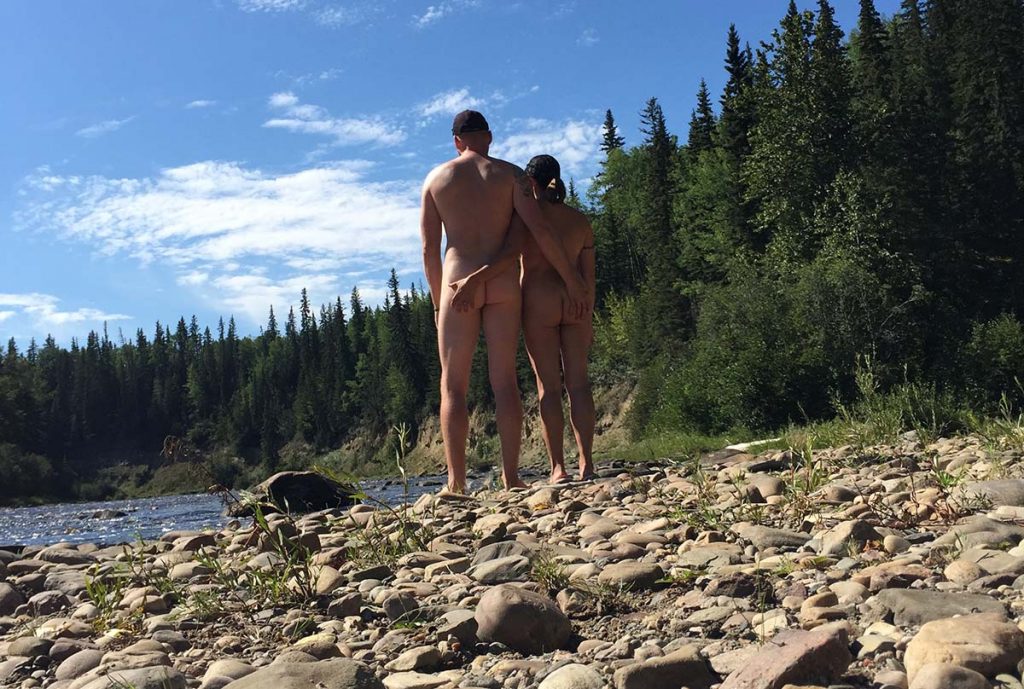 Personally, I grew up in what I would call a “nude-friendly” home. I had never even heard the words “nudist” or “naturist” until I was in my early teens, but it was just a practical thing in some instances. As kids, if my brother and I were down at the river, or wanted to go play in the rain or something, it was just common sense to take off our clothes. Naked time was enjoyed even more when being babysat by my German grandparents. Not sure if they preferred a nude lifestyle, or if they just didn’t want to do laundry before sending us home, but it’s definitely something that stuck with me!
Rhonda had previously enjoyed top free tanning, if the area was secluded enough while camping or boating, but had never really dipped a toe in the “nudie lifestyle” until our honeymoon in Jamaica. Thankfully, she was very open to trying it out, and took to it like a fish to water. That was the beginning of our nude travels, and we TRY to enjoy a trip at least once a year. 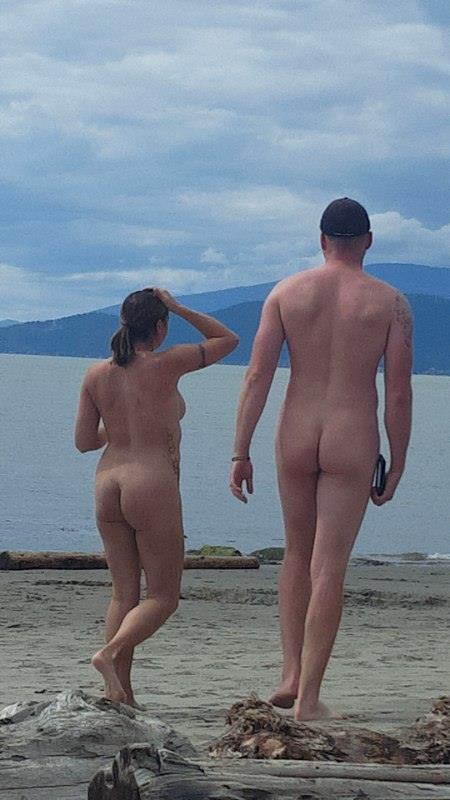 As for Canadian laws, the consensus around here is that our laws are pretty grey and outdated, usually linking nudity with sex. However, there are a few landed and non-landed clubs throughout the country. I actually help run a small clothing-optional group here called Cottontail Corner, and am actually considering starting our own group as well.
Public opinion varies. Honestly, I think that it’s mostly tolerated, but the ones that do take offense to it, are very vocal on social media…but I guess that’s the case with everything. People who tolerate or accept it stay quiet, but that one “squeaky wheel” is always VERY loud. We are considering also starting a blog, or something similar, to give more of a voice for naturists in our area. Let people know that we are not just a bunch of hippies having orgies, and provide a bit of education on what it’s all about. That’s why we enjoy your blog so much!
What we like about living in Alberta is that there are SO many places that are secluded and not owned by anyone. Many places to camp or swim where no one is around. Nude hiking is actually more popular around here than I thought, and I have never heard of someone being offended by catching a nude hiker…including myself! I’ve been rambling a bit here, but simply put, it’s allowed in certain areas, and for the most part I think it’s at least tolerated everywhere else. 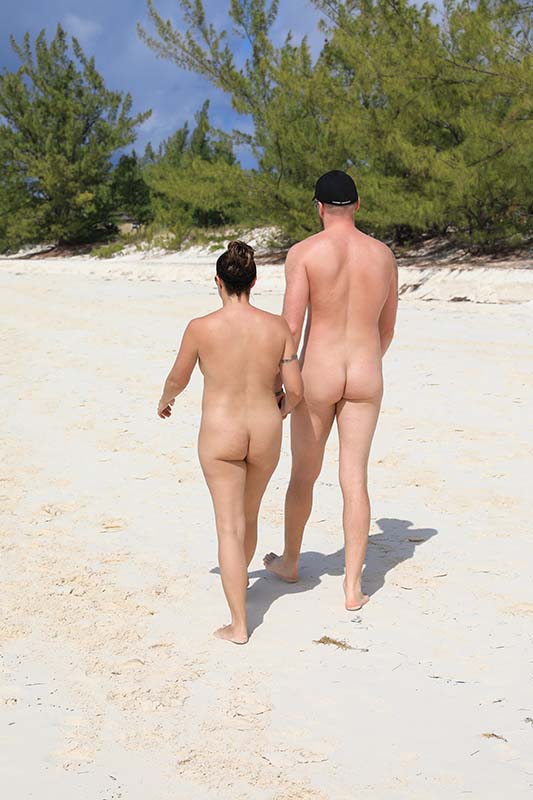 I think that the atmosphere that nudism/naturism creates is unmatched by anything else! It’s an equalizer, and an ice-breaker. In no other social setting have we found it so easy to strike up a conversation, or make friends. Since we started this lifestyle together 7 years ago, we have become friends with many different couples. Not acquaintances, or pen-pals, but truly great friends. We even met our best friends on our anniversary in Jamaica! Now we make a point of trying to visit whichever ones we can each year, either at our homes, or on vacations. Neither of us think that this would have been possible in your average textile environment, and we’ve heard similar stories from many, many other “nudies” as well.
The worst thing about naturism…we have two. One, are the misconceptions of it all. They are the reasons that most people won’t try it outside of their homes. There is quite a stigma about any type of nude lifestyle that has been created by the ignorant and inexperienced. I wish people knew more of what it was truly about, at least enough to try it once. Two, and it was one of your recent blogs that made us think of it, was how females are treated in online naturist environments. The trolls who look into nudist sites for sexual purposes, and throw out anonymous terrible posts at women for no real purpose…just to hurt and insult. We are truly proud of those women out there who can sluff this off, and understand that it’s just mentally ugly people trying to lift themselves up by insulting others. We have NEVER seen this type of idiocy in real life, and we have been to many different nude venues now. The comments you read about in anonymous posts DO NOT represent real life nude-friendly environments.

I mentioned this quite a bit in the previous question…it’s very easy. Even if you’re not necessarily “making friends”, it’s easy to talk to people. With all that dialogue, it’s easy to make friends with people who you may not have considered chatting with in other situations. Sometimes, we’ll get into a long chat with another couple, only to find that we didn’t really have all that much common ground. It will still be a nice talk, you learn names, and go your separate ways. Other times, as was our case at a resort in Jamaica, and on a couple cruises, you make friends that you will keep in touch with for the rest of your lives! 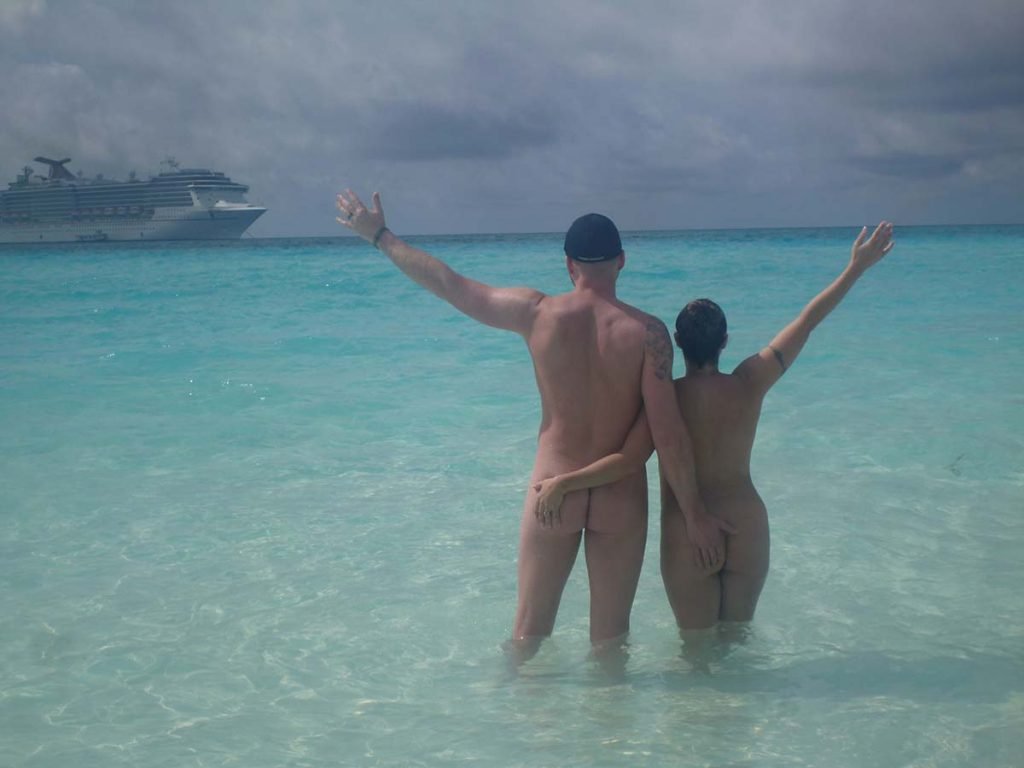 Forget what you may have heard about it, and just try it! Not even necessarily in a large social setting. Try it at home. Don’t dress immediately after a shower. Maybe strip down while cleaning the house. Found a nice spot on a hike? Drop your clothes for a minute and work on that all-over tan! How or where you try is totally up to you, but just give it a chance. The feeling it gives you, after the initial fears and jitters, is unmatched. The body confidence that it helps with is, if nothing else, a RELIEF. You get to be you. You learn about yourself. It makes you feel great!

There’s so much that can still be said about this lifestyle that I don’t think can be put into words. It has provided us with amazing friends, great stories, some hilarious situations, and has allowed us to see some amazing places. It has also allowed us to put together some words of wisdom for others:

1) Regarding waterslides…Males, let NOTHING dangle. Females, cross your legs like your trying to crush a watermelon.

2) Regarding seating…always sit on a towel. This is ESPECIALLY important for men sitting on slatted chairs.

3) Regarding the outdoors…sunscreen and bug spray. Trying to conduct yourself at work while being extra itchy in intimate areas can make for a difficult day. And yes…I’ve had a mosquito bite down there!

4) Regarding walking along Haulover Beach, while doing your best Velociraptor impression…WAAAYYYY funnier if you’re naked.

Thank you so much for your participation Chris and Rhonda!

The Naturist Talks: Nicole from Canada

The Naturist Talks: Chris from the USA

Naturist Talks: Chris from the USA

The Naturist Talks: Annette and Chris from Bulgaria

10 thoughts on “The Naturist Talks: Chris and Rhonda from Canada”

Things we look forward to doing after the quaranti